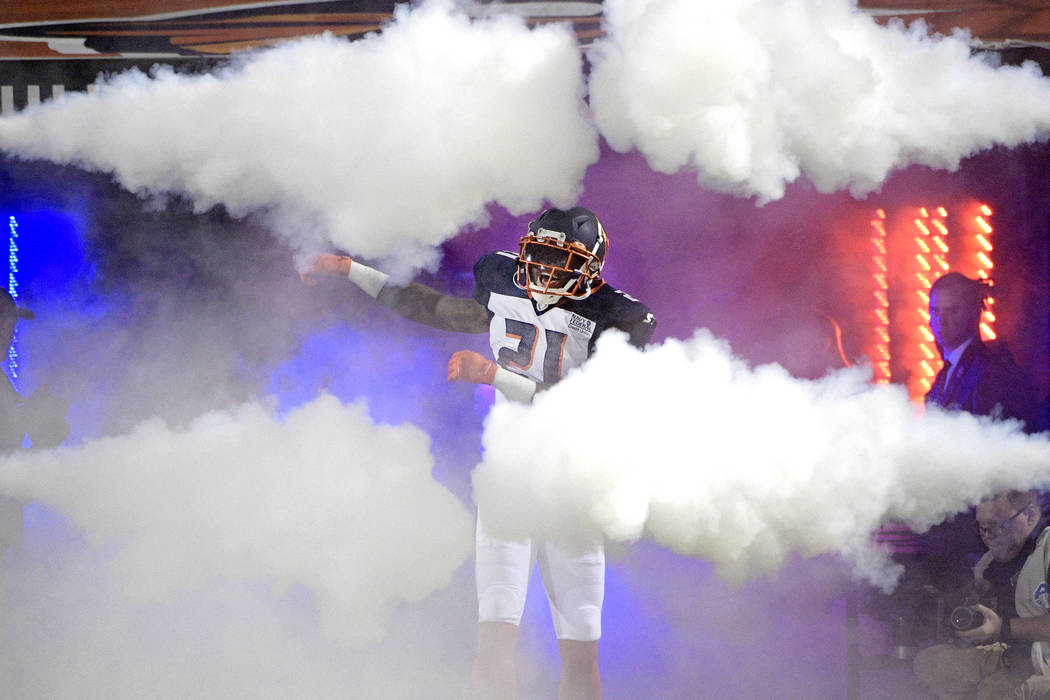 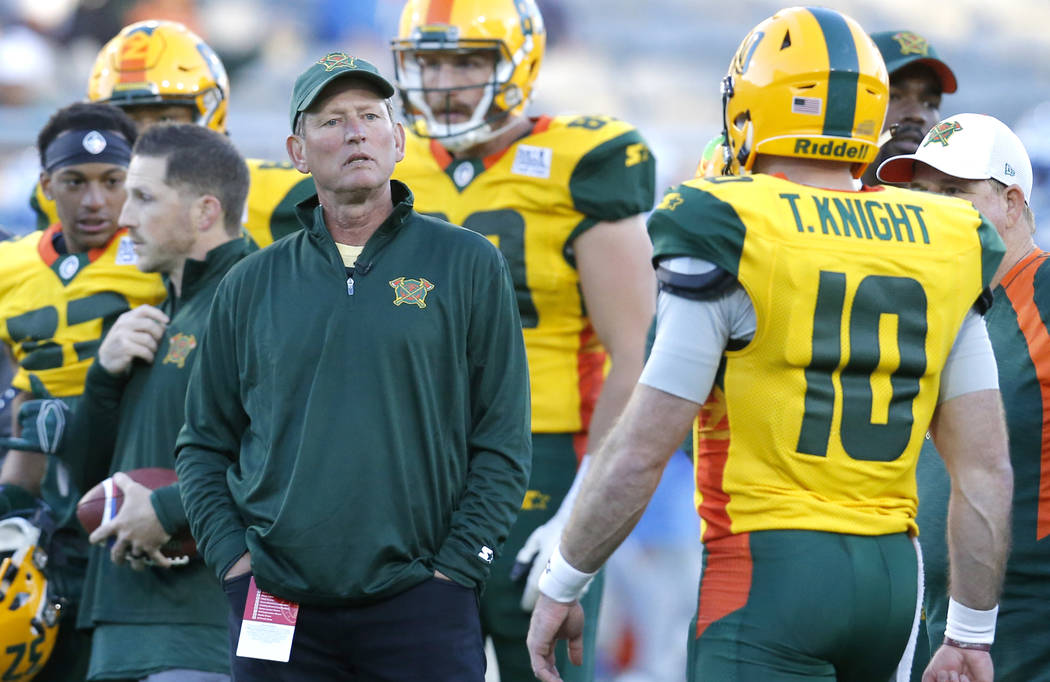 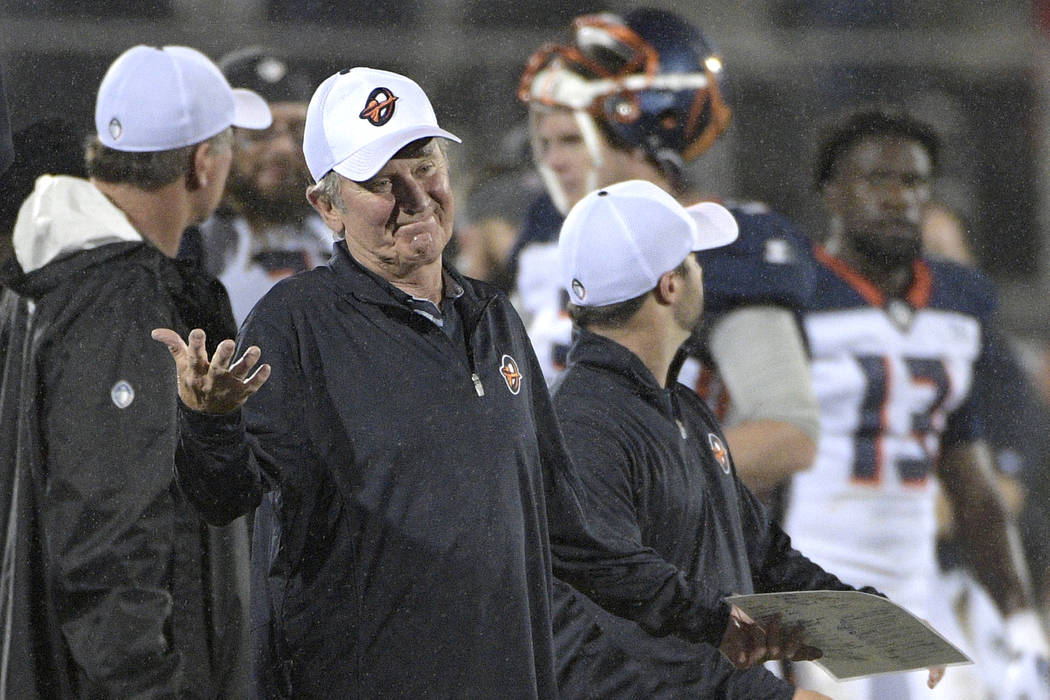 Orlando Apollos coach Steve Spurrier reacts after a play during the second half of the team's Alliance of American Football game against the Atlanta Legends on Saturday, Feb. 9, 2019, in Orlando, Fla. (AP Photo/Phelan M. Ebenhack) 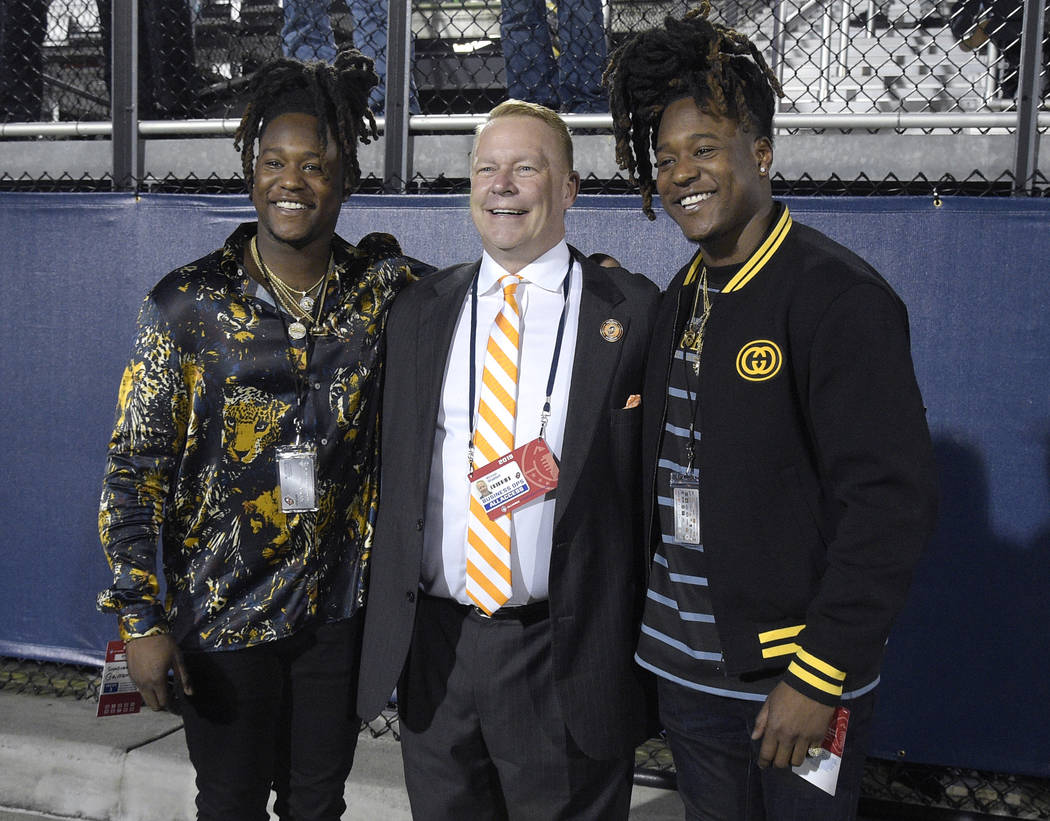 Orlando Apollos president Michael Waddell, center, poses on the sideline with Seattle Seahawks linebacker Shaquem Griffin, left, and defensive back Shaquill Griffin during the first half of the team's Alliance of American Football game against the Atlanta Legends on Saturday, Feb. 9, 2019, in Orlando, Fla. (AP Photo/Phelan M. Ebenhack) 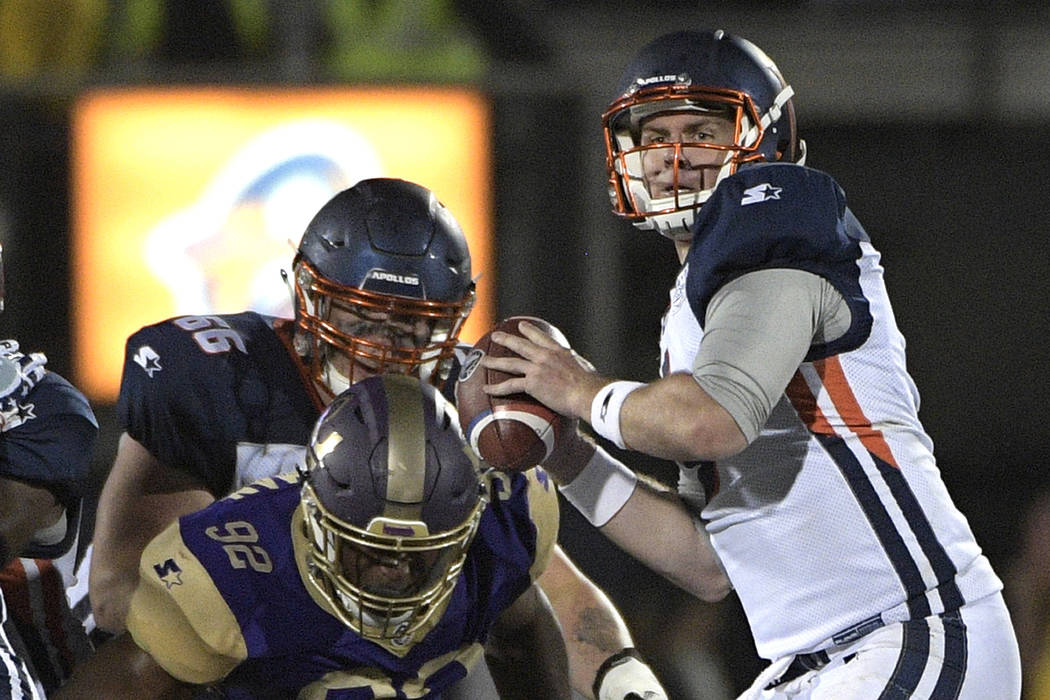 Orlando Apollos quarterback Garrett Gilbert, right, sets up to throw a pass in front of Atlanta Legends linebacker KeShun Freeman (92) during the first half of an Alliance of American Football game Saturday, Feb. 9, 2019, in Orlando, Fla. (AP Photo/Phelan M. Ebenhack) 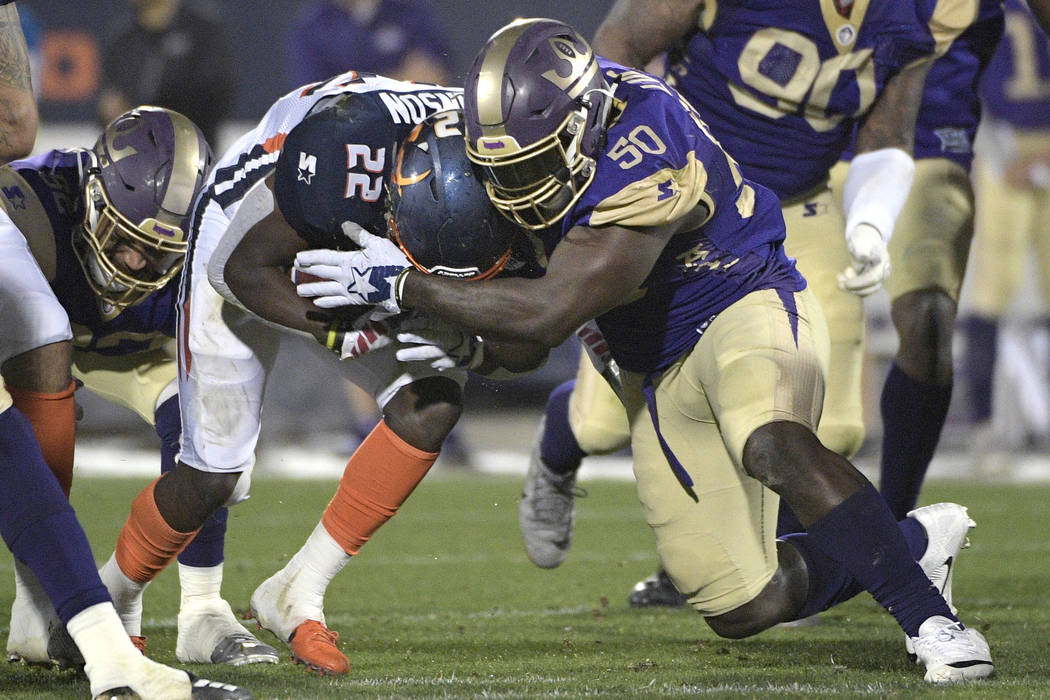 Orlando Apollos running back D'Ernest Johnson (22) is stopped by Atlanta Legends linebacker Jeff Luc (50) after rushing for a short gain during the first half of an Alliance of American Football game Saturday, Feb. 9, 2019, in Orlando, Fla. (AP Photo/Phelan M. Ebenhack) 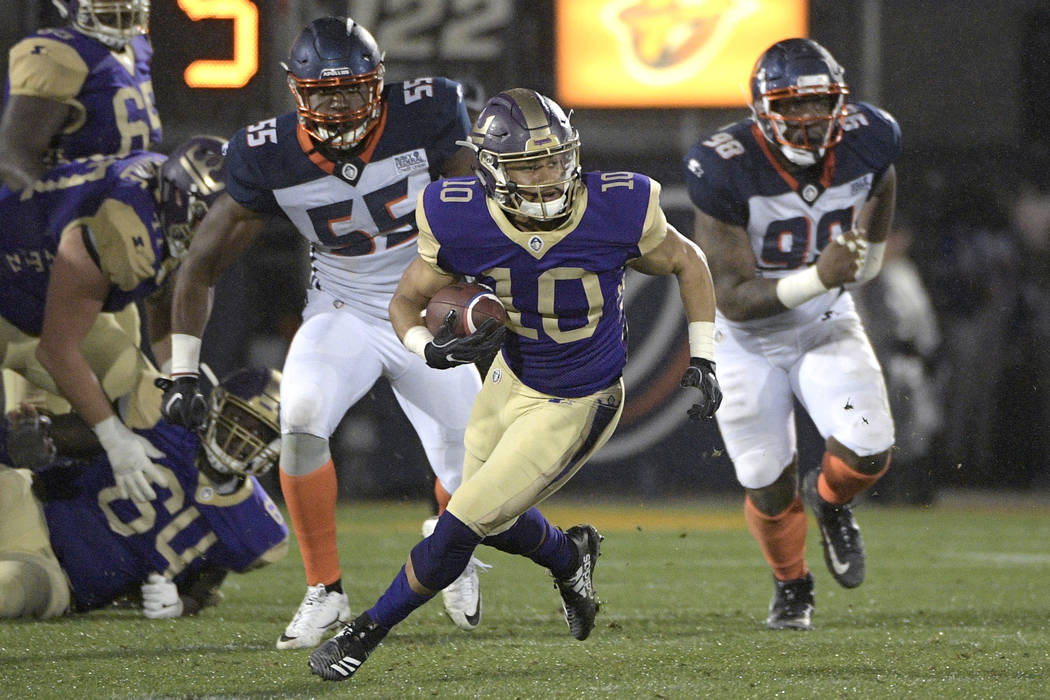 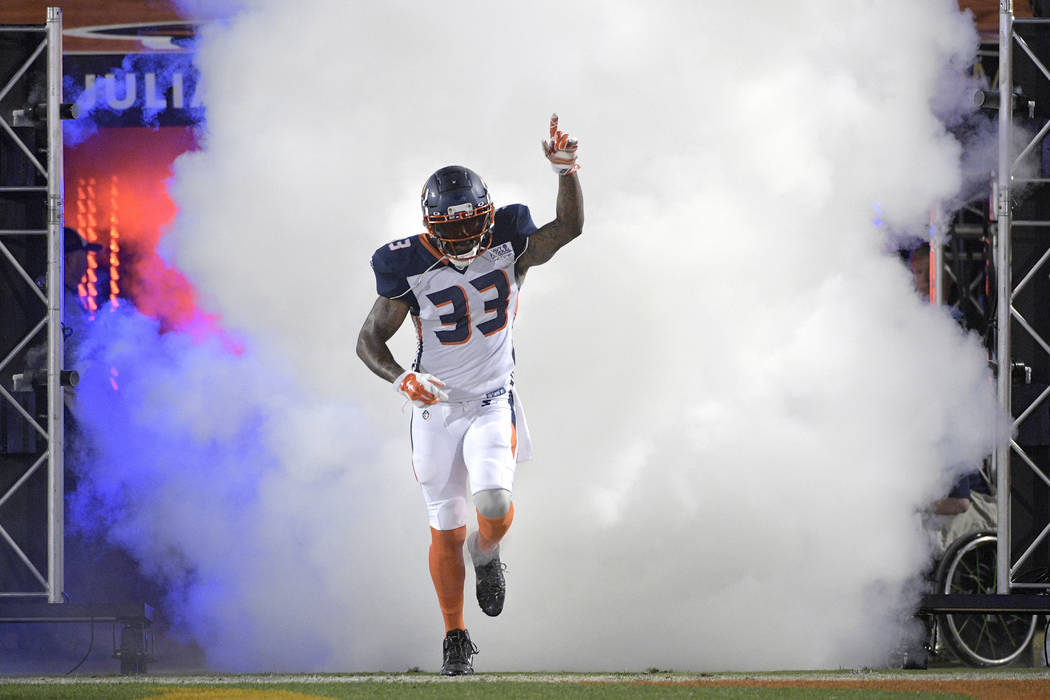 Orlando Apollos safety Will Hill III runs onto the field during player introductions for the team's Alliance of American Football game against the Atlanta Legends on Saturday, Feb. 9, 2019, in Orlando, Fla. (AP Photo/Phelan M. Ebenhack) 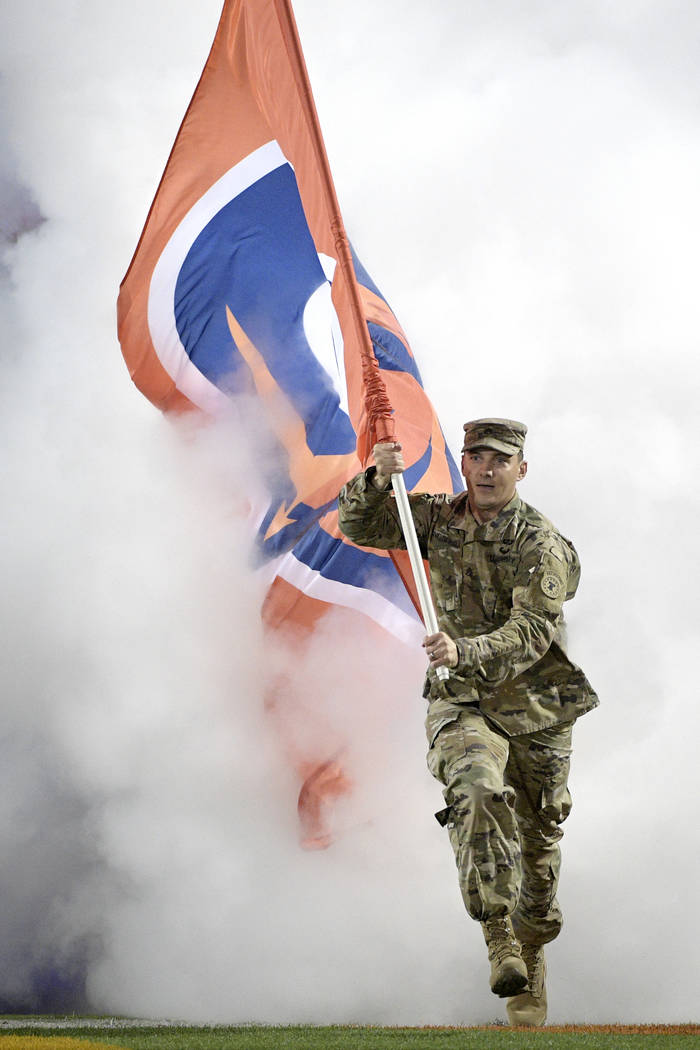 A member of the U.S. military carries a team flag onto the field before an Alliance of American Football game between the Orlando Apollos and the Atlanta Legends on Saturday, Feb. 9, 2019, in Orlando, Fla. (AP Photo/Phelan M. Ebenhack) 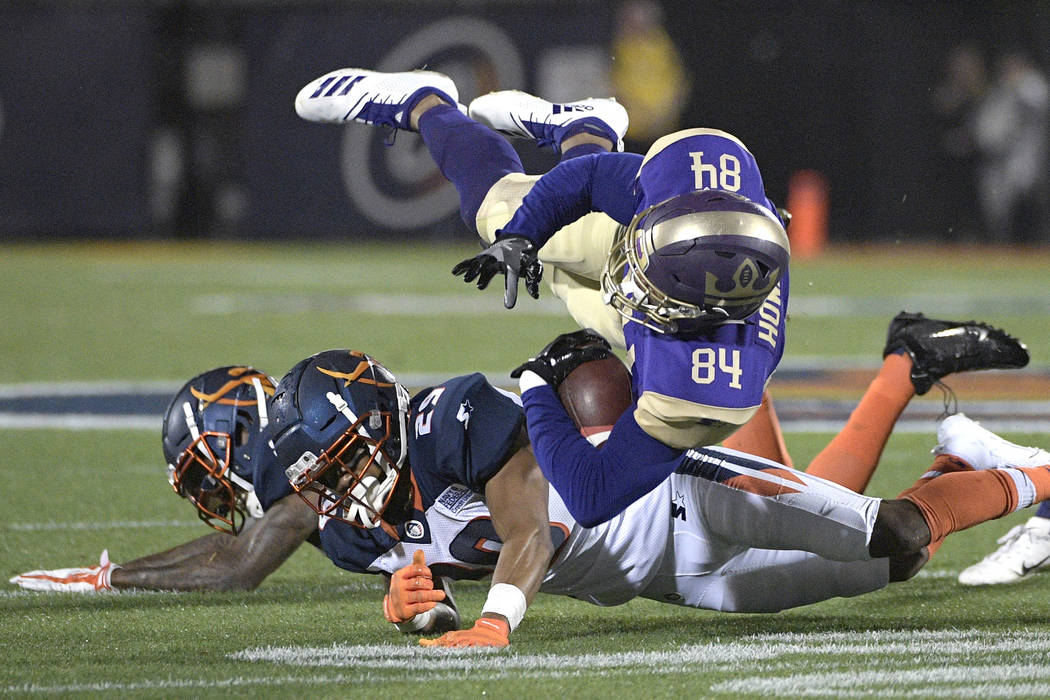 FILE - In this Feb. 9, 2019, file photo, Atlanta Legends receiver Bug Howard (84) is tackled by Orlando Apollos safety Will Hill and defensive back Keith Reaser (29) after catching a pass during the first half of an Alliance of American Football game, in Orlando, Fla. Almost no one knows the players, and there’s virtually no history to look back on. But that’s not stopping people from making _ and bookmakers from taking _ bets on America’s newest professional football league, the Alliance of American Football (AAF).(AP Photo/Phelan M. Ebenhack)

Each year after the Super Bowl, millions of fans and sports bettors suffer through football withdrawal symptoms.

A new league, the Alliance of American Football, is betting that it can help fill the void left by the end of the NFL season.

The fledgling AAF kicked off its inaugural 10-week season Feb. 9 to positive reviews. The signature moment was Shaan Washington’s big hit on Mike Bercovici that sent the quarterback’s helmet flying in the San Antonio Commanders’ 15-6 win over the San Diego Fleet. The play, which wasn’t penalized, quickly went viral on social media.

The eight-team league’s first nationally televised games on CBS generated a higher TV rating than the Houston Rockets-Oklahoma City Thunder NBA game on ABC. And the action on the AAF at Las Vegas sportsbooks exceeded expectations in pregame and in-play wagering.

“I was more surprised with the in-play action,” William Hill sportsbook director Nick Bogdanovich said. “The in-play action compared to an NCAA basketball game, for sure.

“As bettors get more familiar with the players and the product, betting will increase.”

The coaches are better known than the players at this point, with Steve Spurrier guiding the Orlando Apollos and Rick Neuheisel coaching the Arizona Hotshots.

Orlando whipped the Atlanta Legends 40-6 in the opener, and Arizona beat the Salt Lake Stallions 38-22. The teams are the 2-1 co-favorites at the Westgate sportsbook to win the AAF title game, scheduled for April 27 at Sam Boyd Stadium.

Kornegay was one of several Las Vegas bookmakers invited by the league to attend two days of exhibition games in San Antonio the week before the Super Bowl.

“We all left with pretty much the same impression, that the league was very well-organized,” Kornegay said. “The product on the field was young, but you could see that there was some talent on the field.”

The AAF Week 1 wagering handle at the Westgate was comparable to college basketball. But Kornegay was more impressed with the product on the field, the league’s broadcast partners — which include the CBS Sports Network, NFL Network and TNT — and the game times, which will feature weekly Saturday and Sunday doubleheaders capped by 5 p.m. PST kickoffs.

“Being consistent in the days and times they play will make it easier for them to build an audience,” Kornegay said. “I truly believe it’s going to progress. I think more people will bet it in the upcoming weeks.”

Home favorites went 4-0 straight up and against the spread in Week 1, and three of the four games went under the total.

“I certainly would expect scoring to go up,” Kornegay said. “The tweaks of the rules are meant for more scoring and faster games.”

AAF games are designed to be played in 2 hours, 30 minutes. The play clock is 35 seconds (as opposed to 40 for the NFL), and there are no kickoffs or extra points. Teams must attempt a 2-point conversion after a touchdown.

“For gambling purposes, that really changes the key betting numbers,” Kornegay said. “Seven is irrelevant now, which is weird. Six and eight are more relevant numbers, and three is still holding its own.”

The league also uses a “sky judge” that can correct officiating errors from the press box.

Kornegay was struck by the lack of offensive holding calls, which might stem from the rule that restricts defenses to five pass rushers.

“They mentioned they were going to relax offensive holding calls unless it was blatant, which creates more scoring,” he said.

The league’s biggest star player is Trent Richardson, a former No. 3 overall NFL draft pick who rushed for 58 yards and two TDs on 23 carries for the Birmingham Iron in their 26-0 win over the Memphis Express.

“There are some names there,” Bogdanovich said. “They’re pretty organized and have some money behind them. If they play their cards right, it just may work.”

Christian Hackenberg, a former Penn State quarterback and second-round NFL draft pick, flopped in his Memphis debut, throwing for 87 yards and one interception.

Hackenberg will make his second start Saturday against Arizona, which helps explain why the Hotshots have soared to 13-point road favorites after the line opened at 6½.