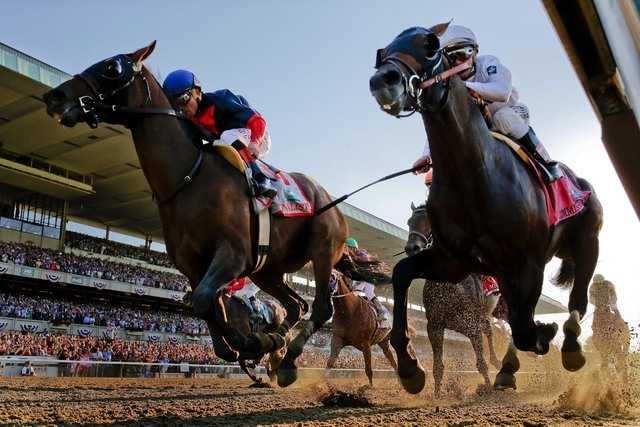 Tonalist, left, with Joel Rosario up edges out Commissioner with Javier Castellano up to win the 146th running of the Belmont Stakes horse race, Saturday, June 7, 2014, in Elmont, N.Y. (AP Photo/Matt Slocum)

Local horse racing bettors are facing some post-Christmas coal in their stockings as negotiations between some tracks and the Nevada Pari-Mutuel Association have yet to yield new deals.

The main issue is the New York Racing Association, which runs Aqueduct, Belmont Park and Saratoga, and had a management shakeup in 2013. The current NYRA management wants a significant increase in the fee for its signal from its three tracks and the NPMA is reluctant to pay up.

The Nevada Pari-Mutuel Association refuses to divulge what it actually pays the race tracks. However, sources with knowledge of the situation say that Nevada has been paying NYRA, which in addition to Aqueduct, oversees racing at Belmont Park and Saratoga, between 5 percent and 6 percent for its signal. The handle in Nevada on New York racing is expected to exceed $50 million this year.

NYRA, which showed a profit for the first time in 13 years, reportedly is asking to almost double the fee for its signal, which would mean between 10 to 12 percent that Nevada would have to pay.

“We’ve been fair with them in the past and have given them increases,” said Johnny Avello, who runs the race and sports book at Wynn Las Vegas and is close to the negotiations. “But what they’re asking is too much.”

NYRA officials wouldn’t direct comment on the talks. Spokesman John Durso Jr. said, “It’s our policy not to publicly comment on the status of ongoing negotiations.”

Patty Jones, the executive director of the Pari-Mutuel Association said, “I’m hopeful we can come to an agreement on the best deal for both sides.”

NYRA has been doing business with the Pari-Mutuel Association since it was formed in 1991 and there has never been a blackout of its signal. But while NYRA claims it needs to increase its revenue streams, Nevada has seen a drop in business in its racebooks for the last seven years.

“We’ve been in a decline for some time now and our costs keep going up,” Avello said. “We’re another amenity for the casino. We do it to add to our customer experience. But at some point, if the costs become too much, you have to ask yourself, ‘Is it worth it?’”

Aqueduct reopens its winter meet Friday and its contract with Nevada runs through Wednesday. If no agreement is reached by then, the signal will go dark and the Nevada race books will have to decide how they want to handle things. Some can choose to continue to book the track and limit payouts to protect the house. Others may decide it’s not worth the trouble and not offer Aqueduct.

“Horse players will simply find another track to bet, whether it’s California or Florida,” said Avello, who added that Wynn will offer wagering on Aqueduct but will not show the track’s signal on TVG, a horse racing TV network which owns the rights to carry NYRA tracks.

But players who have mobile devices can watch the races either through NYRA’s website or through the cable or satellite provider. TVG is available on Cox Cable in Las Vegas.

But that will all be moot if the two sides can work out a deal. While Nevada’s talks with NYRA have yet to produce a deal, it is also in negotiations with Monarch Content Management, which owns and operates Santa Anita, Golden Gate, Gulfstream, Laurel and Pimlico. Santa Anita also opens Friday and while no deal is in place, the two sides are talking and Monarch has agreed to an extension to allow its signal to be shown in Nevada as long as negotiations remain in good faith.

“I’m pretty confident we’ll get a deal with Monarch,” Avello said. “I’m not so sure about NYRA. I think they’re being a little ridiculous with what they’re asking.”