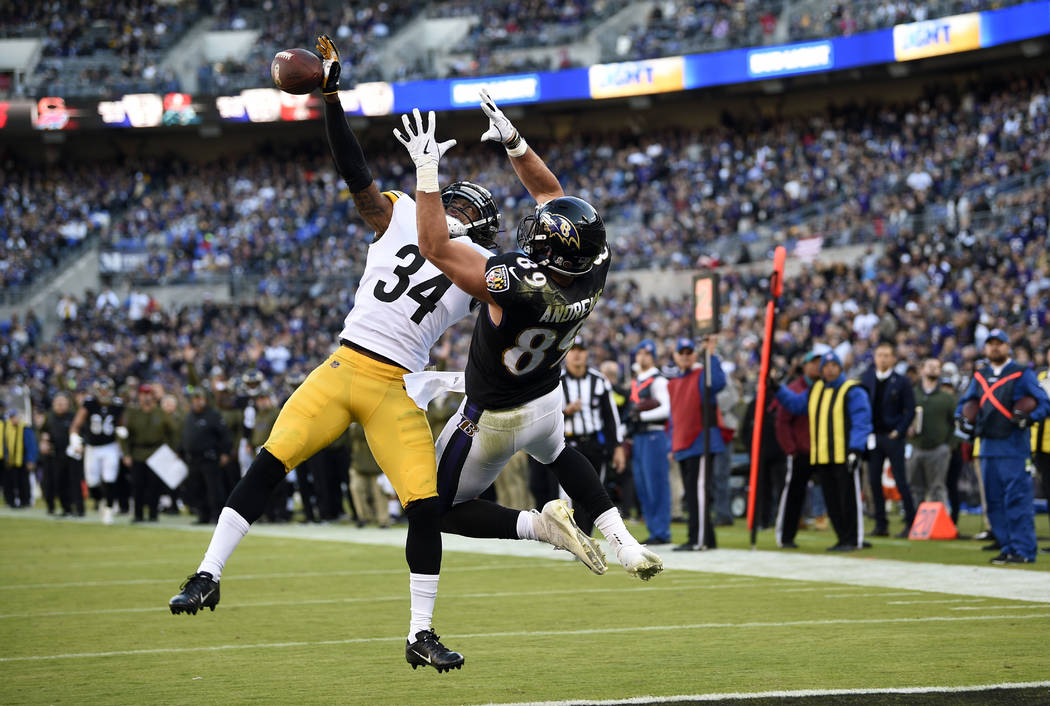 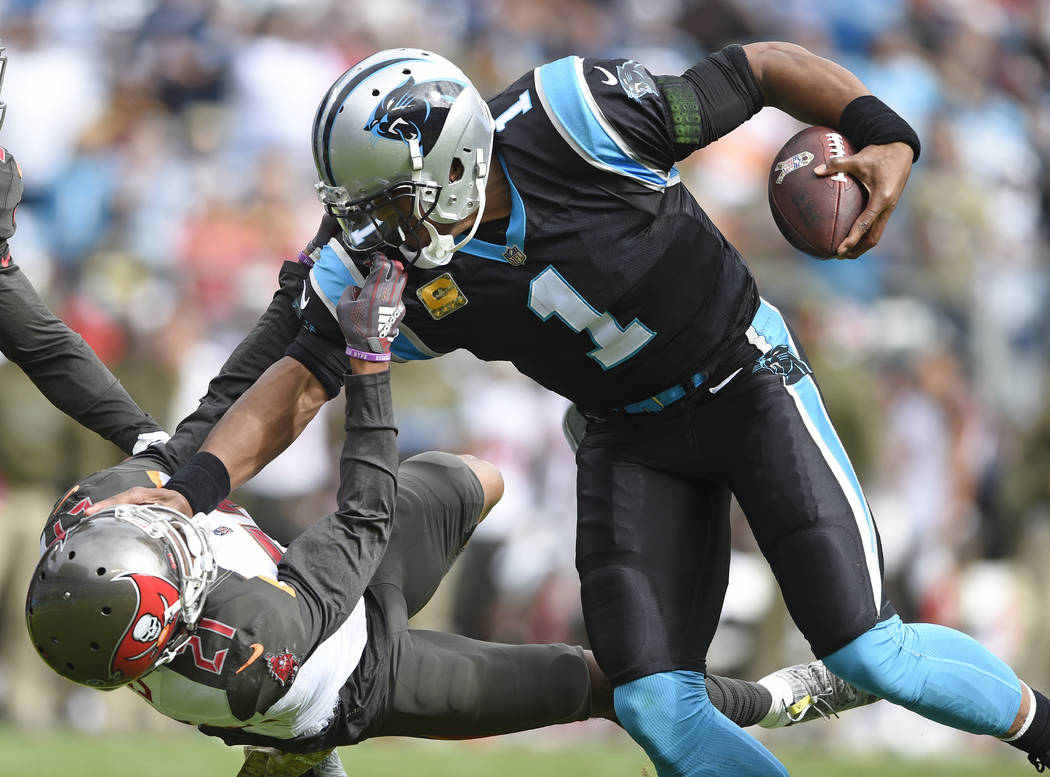 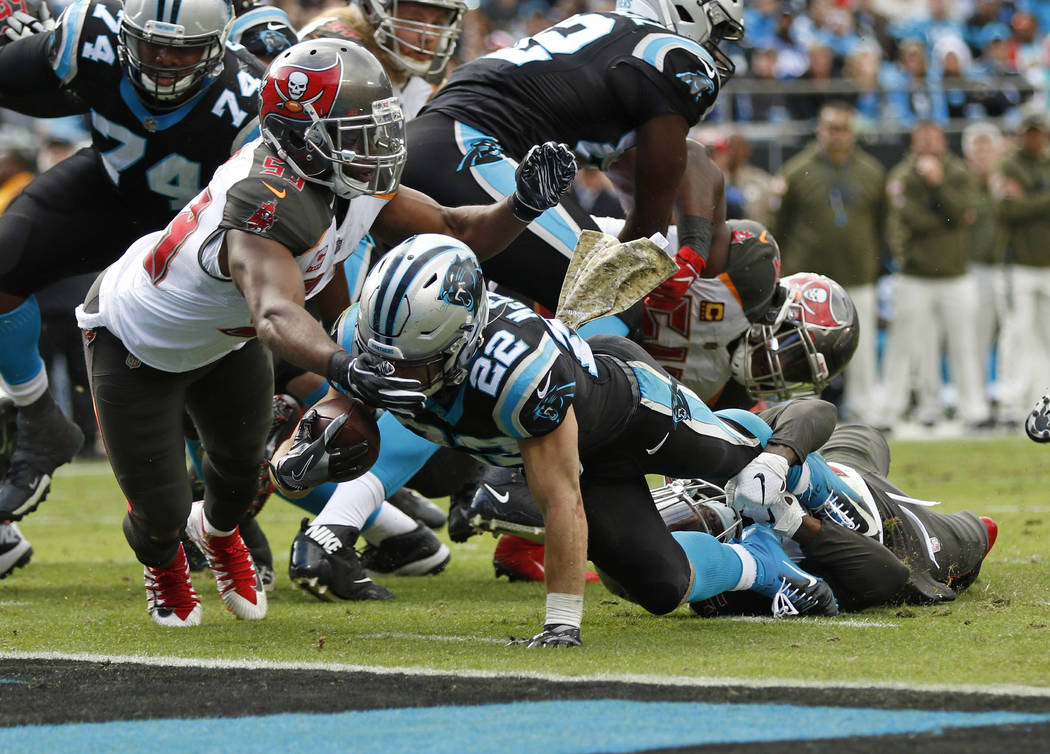 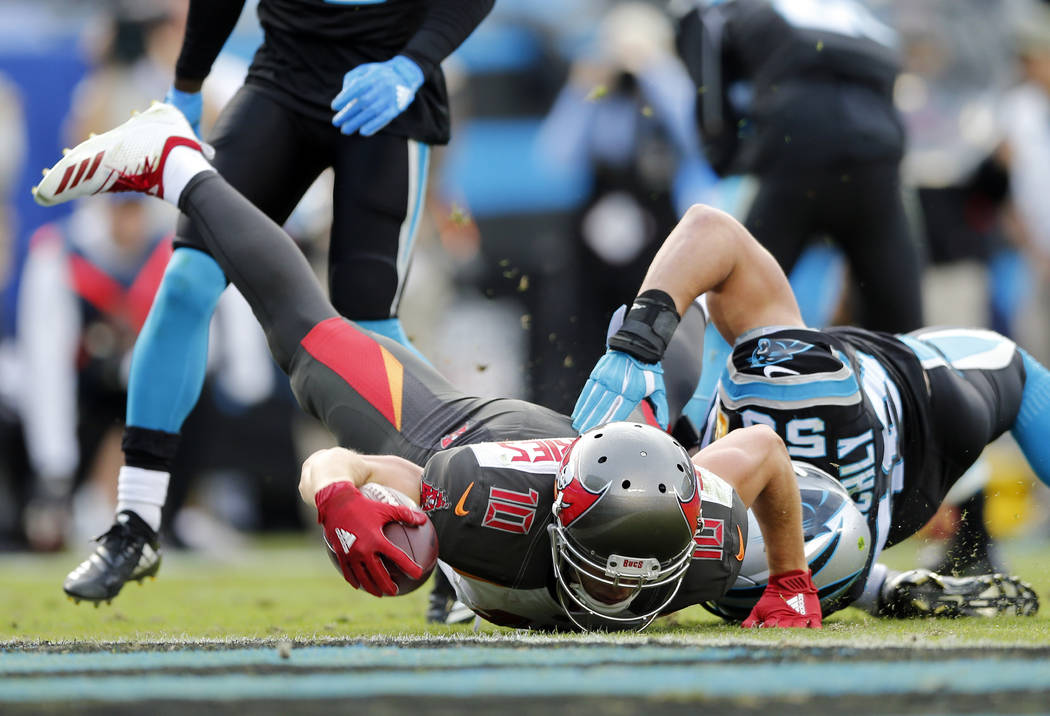 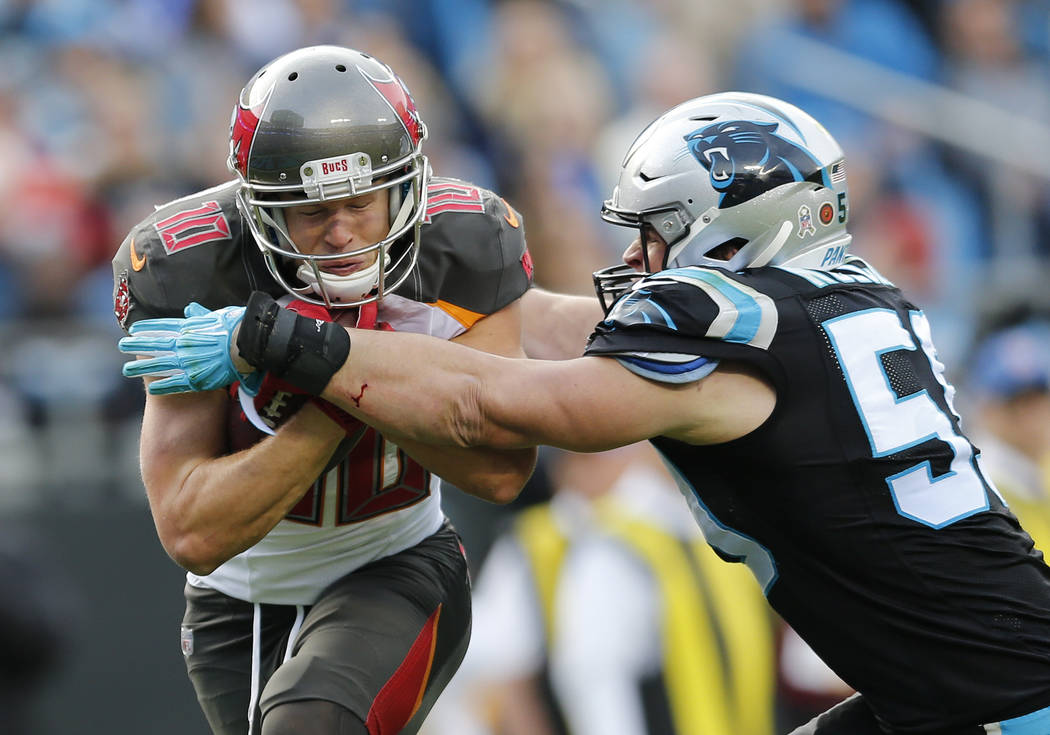 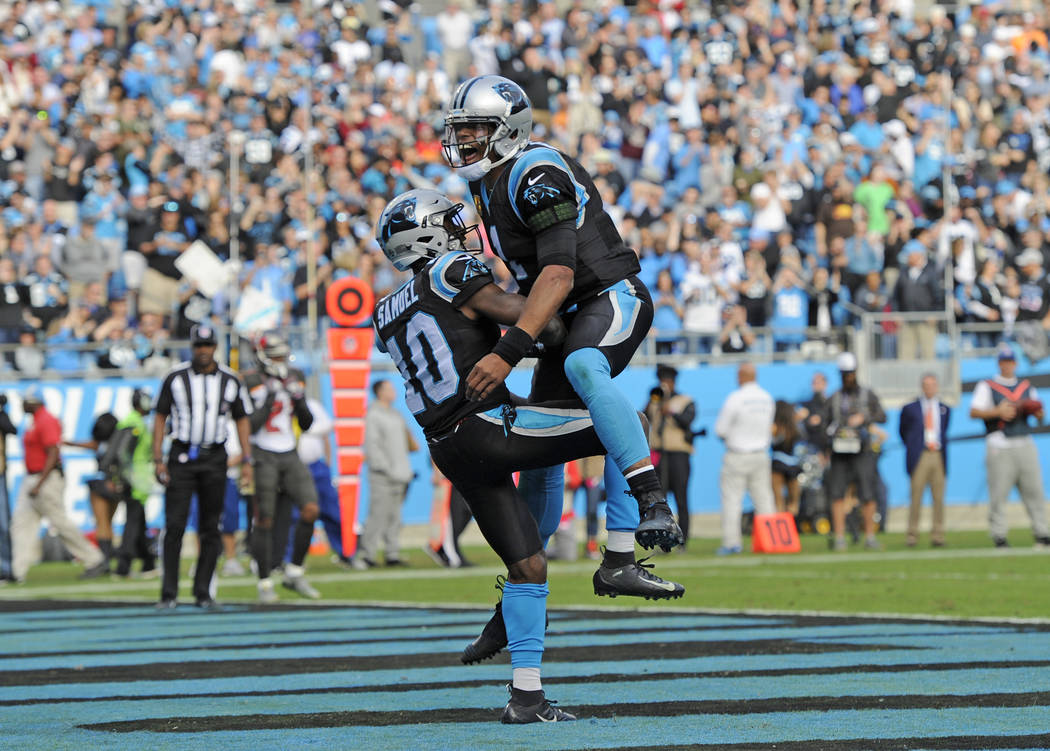 Carolina Panthers' Curtis Samuel (10) and Cam Newton (1) celebrates their touchdown against the Tampa Bay Buccaneers in the second half of an NFL football game in Charlotte, N.C., Sunday, Nov. 4, 2018. (AP Photo/Mike McCarn) 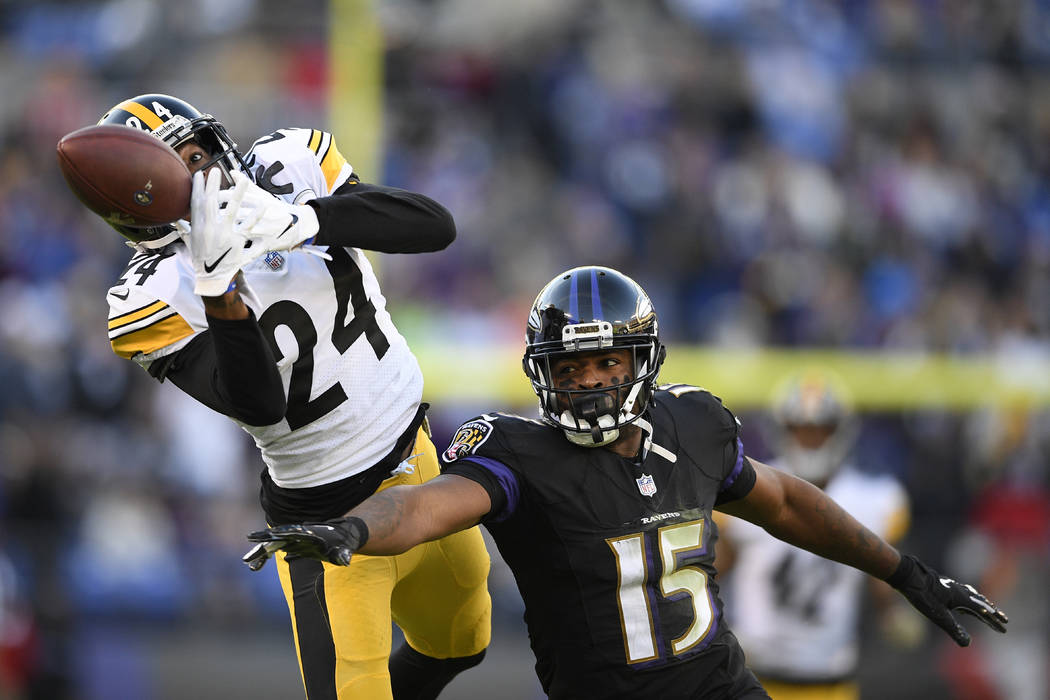 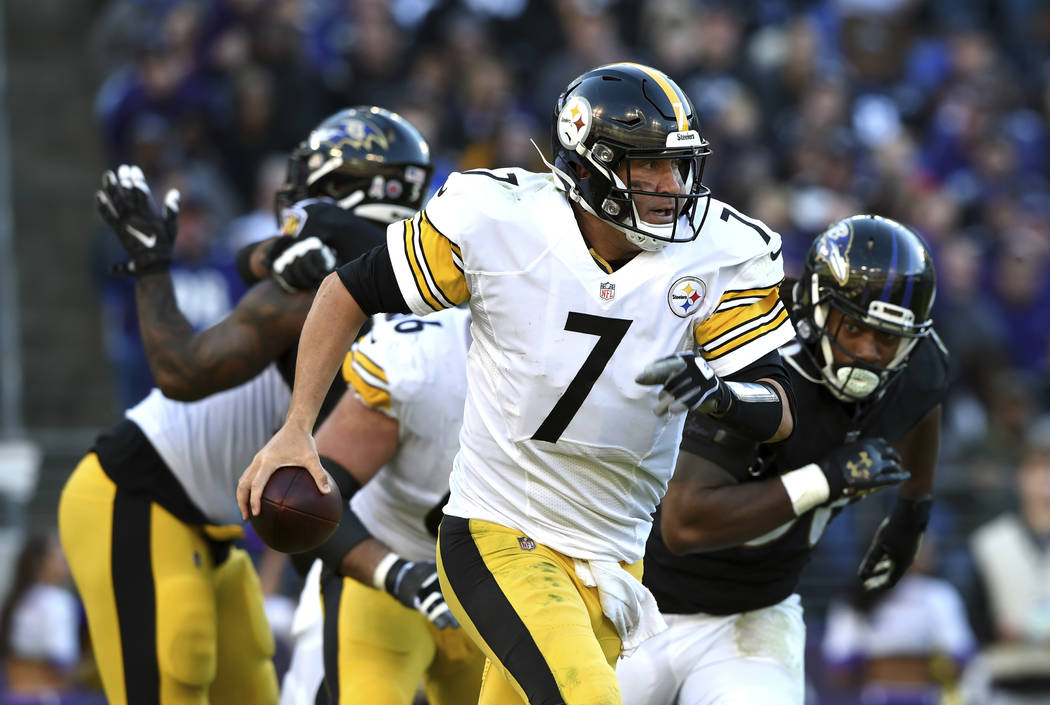 The home team has dominated on “Thursday Night Football” this season, winning seven of the nine games while going 6-2-1 against the spread.

The Steelers are consensus 3½-point home favorites over the Panthers on Thursday night after the line opened as high as 6½ at the Westgate sports book. But Caesars Entertainment sports book risk manager Jeff Davis is in no hurry to follow the money on Carolina.

“My opinion is don’t get involved with the road team on Thursday night,” he said. “We’ve seen what the road teams do in these games, and that’s nothing most of the time. It would be the home team or pass for me.”

Davis said the money and ticket count on Thursday’s game is even, though the line has dropped to 3 (minus 120) at Boyd Gaming sports book.

“The public’s on the over. The tickets are almost 4-1 on the over. But there’s no real indicator on what the right side is on either the side or the total.”

Pittsburgh has won and covered the last five meetings, with its lone loss in the series coming in the teams’ first matchup in 1996.

The Steelers have won and covered their last four games overall, beating the Falcons and Browns at home and the Bengals and Ravens on the road.

The Panthers have won and covered their last three games, rallying for a comeback win at Philadelphia before beating Baltimore and Tampa Bay at home.

Cam Newton hasn’t thrown an interception in a month, and Carolina ranks No. 8 in the NFL in rushing defense. Ben Roethlisberger has thrown for 15 touchdowns and four interceptions in his last seven games, and Antonio Brown has scored a TD in six straight games.

Pittsburgh has won 13 of its last 14 prime-time games but is 2-5 ATS in its last seven games as a home favorite. The Panthers are on a 13-5 cover streak as underdogs and have covered seven of their last 10 as road underdogs.

The over is 5-1 in the Steelers’ last six home games.