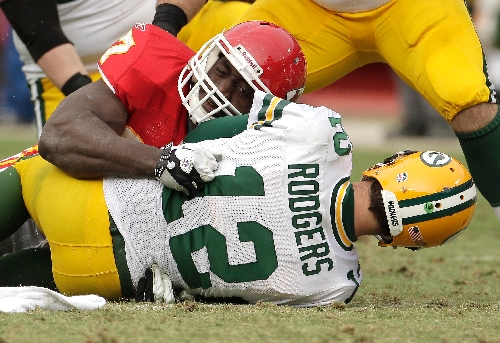 Just when it seemed there would be no stopping Aaron Rodgers from leading the Green Bay Packers to perfection, the many bettors who banked on it took a surprise beating.

After Week 5, the Las Vegas Hilton posted the proposition: Will the Packers finish the regular season 16-0? The “No” side of the answer opened at minus-1,000 and the “Yes” was plus-700.

Hilton sports book director Jay Kornegay said there was “lopsided action” from the betting public on the “Yes” side, which was adjusted to minus-225 before Week 15.

The Packers’ pursuit of 16-0 was stopped cold at 13-0 when they were upset 19-14 by the Kansas City Chiefs on Sunday. Despite all the public support for Green Bay, Kornegay said the prop was not a major decision because of sharp action on the other side.

“There were a lot more tickets on the ‘Yes,’ but the bigger bets were on the ‘No,’ ” Kornegay said.

It was another Sunday full of surprises in the NFL, with the Packers finally losing and the Indianapolis Colts winning for the first time this season, 27-13 over Tennessee.

The New England-Denver game, Rood said, was “one of the top two or three games of the season” in terms of wagering handle.

Tom Brady led the Patriots, who closed as 7-point favorites, to a 41-23 victory over Tim Tebow and the Broncos.

“It was good action both ways,” Rood said. “From a public standpoint, it was all Patriots money.”