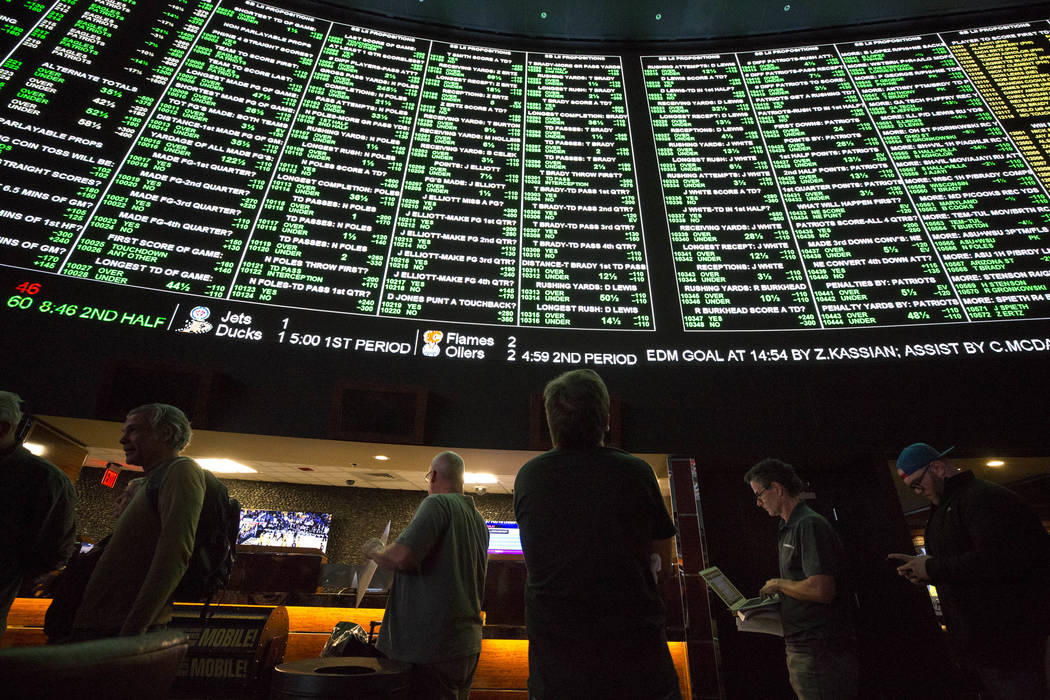 The menu of Super Bowl prop bets lights up the board at the Westgate on Thursday, Jan. 2, 2018 as bettors consider all options for the Feb. 4 clash between the Patriots and Eagles. Richard Brian/Las Vegas Review-Journal @vegasphotograph

A game that rewrote Super Bowl records for offense also shattered Nevada’s record for betting handle. But the state’s sports books finished with their lowest win percentage in 10 years.

Nevada’s 198 sports books had $158.6 million wagered on the Philadelphia Eagles’ 41-33 upset of the New England Patriots on Sunday, according to figures released Monday by the Nevada Gaming Control Board.

The books won only 0.7 percent of the handle for $1.17 million to narrowly avoid losing money on the Super Bowl for the third time in 28 years.

“Props is the reason for the record handle,” CG Technology sports book vice president Matt Holt said. “Those things have just grown by leaps and bounds. We did over $3 million in props ourselves and that’s without taking any big bets.”

The prevalance of mobile apps and growth of in-progress wagering also have helped increase the handle.

“Everybody has in-game wagering and everybody has an app now,” Holt said. “It used to be just a few of us.”

There were five $1 million wagers reported on the game, with only one on the Patriots, who closed as 4- to 5-point favorites. Four of them were placed at William Hill sports book, which took a multimillion-dollar loss.

The books’ win on the game took a huge hit from one high roller. The same mystery bettor who beat Las Vegas books out of an estimated $10 million on the World Series reportedly won more than $10 million on the Super Bowl. He had a total of at least $7.4 million in money-line wagers on Philadelphia, which closed at plus-170.

“He had a lot to do with it,” Holt said. “But people were just betting the Eagles, period, and the props were devastating.”

The mystery man — who’s been called Bettor X and jokingly referred to as Biff Tannen and Nick Papagiorgio on social media — reportedly placed a $3 million wager at MGM Resorts, two separate $1 million bets at William Hill, a total of $1.2 million at CG Technology, a total of $700,000 at South Point and a $500,000 wager at Wynn Las Vegas.

The Patriots trailed 29-19 in the third quarter before rallying to take a 33-32 lead on Tom Brady’s 4-yard touchdown pass to Rob Gronkowski with 9:22 left. But New England’s defense couldn’t stop the Eagles as Nick Foles hit Zach Ertz for the decisive 11-yard touchdown pass with 2:21 left.

With the betting public cashing most player props in the shootout, bookmakers weren’t exactly celebrating the record handle.

“The handle was unfortunately strong,” MGM Resorts sports book director Jay Rood said. “Every prop that could be bet over went over.”