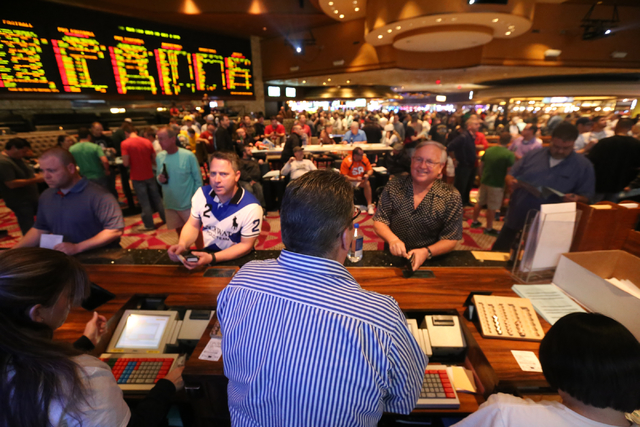 WASHINGTON — The U.S. Supreme Court heard arguments Monday over a federal ban on sports wagering and a majority of justices seemed to be moving toward a ruling that could open the doors for gambling on professional and college games in states nationwide.

The nine justices on the high court appeared split by their questions to lawyers in the case, but a majority seemed skeptical of a federal “commandeering” of state policy on sports wagering.

“That’s what this is about, telling states what to do,” said Justice Stephen Breyer, who appeared sympathetic to the argument of federal overreach.

Following arguments, sports legal experts said that they expected the court would rule in favor of New Jersey in its bid to allow sports betting at casinos and horse tracks.

Justices could also issue a partial ruling that would allow sports gaming in New Jersey without addressing the state’s claim that the law is unconstitutional.

New Jersey has been fighting for several years to overturn the the 1992 congressional ban on sports wagering, the Professional and Amateur Sports Protection Act, known as PASPA. Four states with sports gaming were grandfathered by PASPA and not included in the ban: Nevada, Delaware, Montana and Oregon.

In 2012, with voters’ support, New Jersey lawmakers authorized sports betting, directly challenging the federal law. The four major professional sports leagues and the NCAA sued, and the state lost in court. In 2014, New Jersey tried a different tactic by repealing laws prohibiting sports gambling at casinos and racetracks. It lost again in court.

Since PASPA passed, New Jersey has challenged the ban six separate times in lower courts, up to the 3rd Circuit Court of Appeals, which affirmed the rulings.

Feds side with NCAA

But the Supreme Court agreed to hear the case on New Jersey’s request and asked the federal government to weigh in. The government sided with the NCAA. A ruling on the case is expected next summer.

New Jersey’s lawyer, Ted Olsen, the former U.S. solicitor general, argued the ban is unconstitutional and violates a doctrine that prohibits the federal government from forcing states to enact policy.

Olson told the court that since the federal government has not regulated the activity, there is nothing that allows it to preempt a state regulation.

New Jersey and sports legal experts said the major leagues’ charge of damage became moot when they allowed NHL and NFL franchises in Nevada, where sports books and gaming on college and pro sporting events is legal.

Justice Anthony Kennedy peppered Paul Clement, a former U.S. solicitor general and lawyer for the NCAA and the leagues, about federal laws that appeared to “commandeer” states to act on the federal government’s behalf.

Clement said the federal government, in laws it passed, did not want states operating gambling schemes over concern of interstate commerce.

But Clement’s arguments came under scrutiny from Kennedy, Breyer, Chief Justice John Roberts, and Justices Samuel Alito and Neil Gorsuch. Justice Clarence Thomas, a conservative member on the court, did not speak.

Sotomayor said there was nothing in federal law that appeared unconstitutional.

The American Gaming Association, which represents casinos, has long argued that the ban on sports wagering in states has created a $150 billion illegal market.

The AGA supports New Jersey in the case and said sports wagering would be regulated, taxed, or provide consumer protections, like the system in Nevada.

Geoff Freeman, AGA president, interpreted the high court’s questions in the oral arguments as a positive for “millions of Americans seeking to legally wager on sporting events.”

Freeman would not predict the Supreme Court’s intentions, but he did predict the demise of PASPA.

“I heard a court that is suspicious of the federal government’s overreach in this case,” Freeman said.

David Wallach, sports legal expert, said the high court clearly questioned the NCAA’s case. He said he could see a 6-3 ruling in favor of New Jersey, even if the court stays away from the constitutionality of the law.

Nevada’s gaming industry supports New Jersey and as many as 20 other states that have asked the Supreme Court to throw out the sports wagering law.

Casinos based in Las Vegas would be well positioned to expand operations in other states if the court rules in favor of New Jersey.

“Those of us who have been involved with the industry know that a regulated market is better than an illegal one,” she said. “Change is long overdue.”

Titus said 13 states have passed laws on gaming in anticipation of a Supreme Court ruling that would make sports wagering legal.

She called Monday for a hearing in the House Commerce and Energy Committee to hear from legal and regulatory experts on how to best establish systems with protection.

A ruling by the Supreme Court to uphold New Jersey’s challenge that the law is unconstitutional could have an impact on states on other regulations, like those on medical marijuana, immigration and gun control and occupational licensing, said Elbert Lin, a former West Virginia solicitor general who filed a brief supporting New Jersey.

Should the high court strike down the federal law, other states could move quickly to take part of the $150 billion the American Gaming Association says is wagered illegally every year. By some estimates, more than a dozen states could have legal sports gambling by the end of next year.

New Jersey Gov. Chris Christie, who sat in the front row for Monday’s argument, told reporters afterward that his state is ready to begin sports betting within two weeks if it prevails. Mississippi and Connecticut also have already passed legislation that would let them offer sports gambling almost immediately.