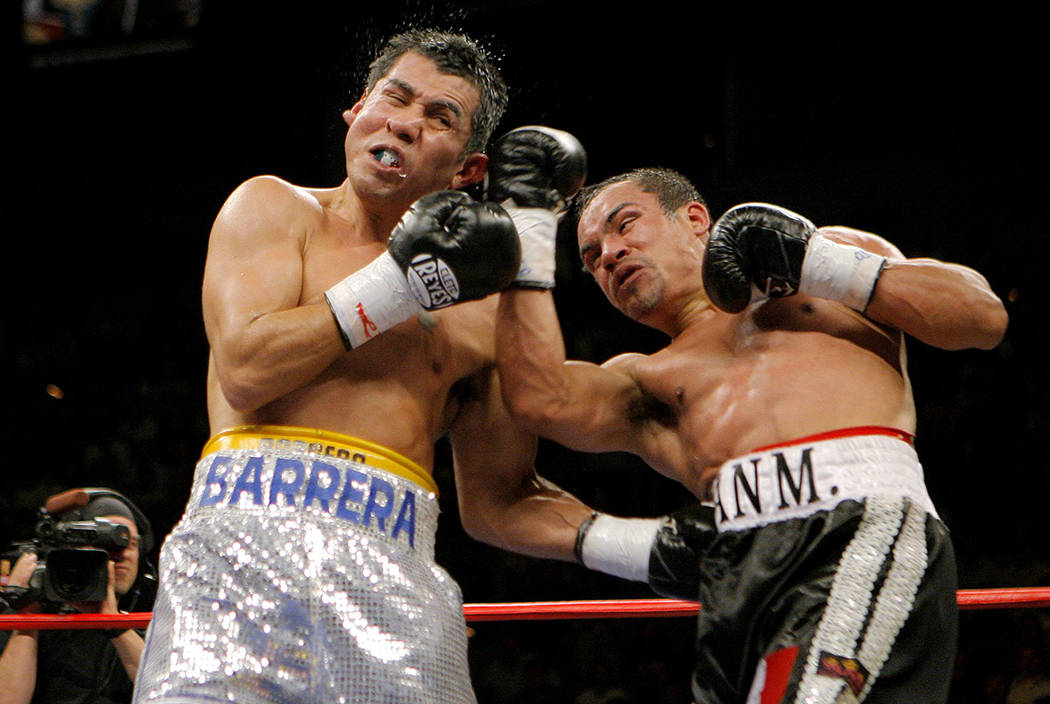 Marco Antonio Barrera, left, of Mexico, takes a punch from Juan Manuel Marquez, also of Mexico, in the sixth round of a WBC super featherweight championship boxing match on Saturday, March 17, 2007, in Las Vegas. Marquez won by unanimous decision after the 12th round. (AP Photo/Jae C. Hong) 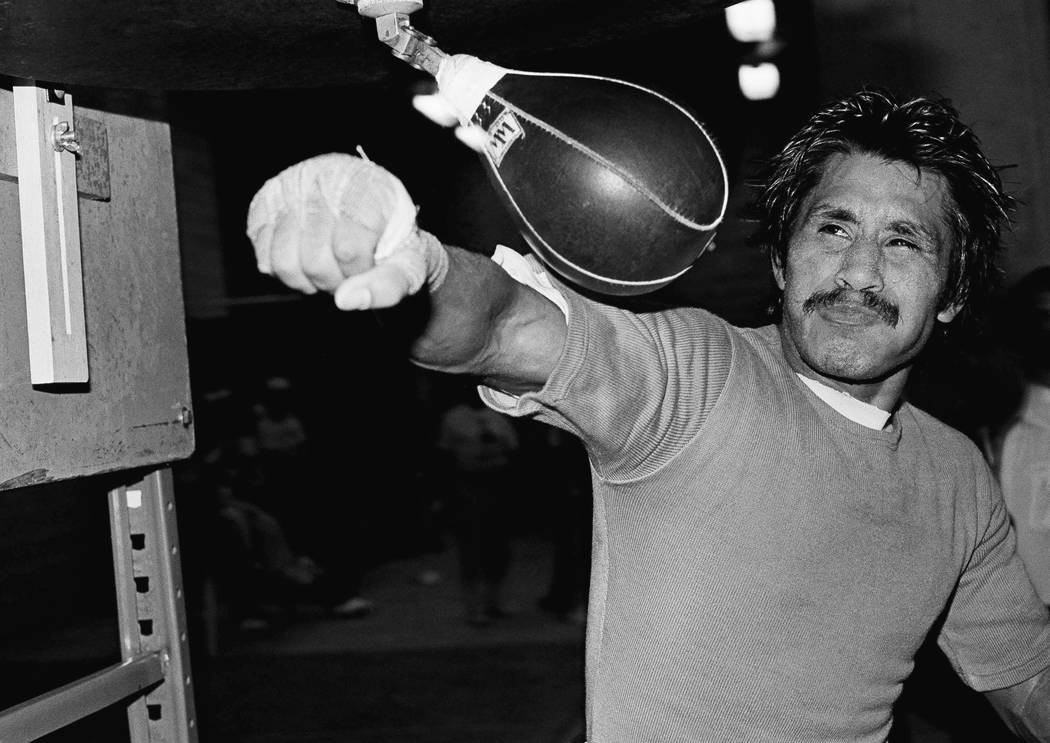 WBC World Bantamweight Champion Lupe Pinter of Mexico works on the speed bag as he gets ready for his title fight in the Superdome Friday, Dec. 2, 1982 in New Orleans. Pintor will be trying to claim the Super Bantamweight title held by Wilfredo Gomez of Puerto Rico. (AP Photo) 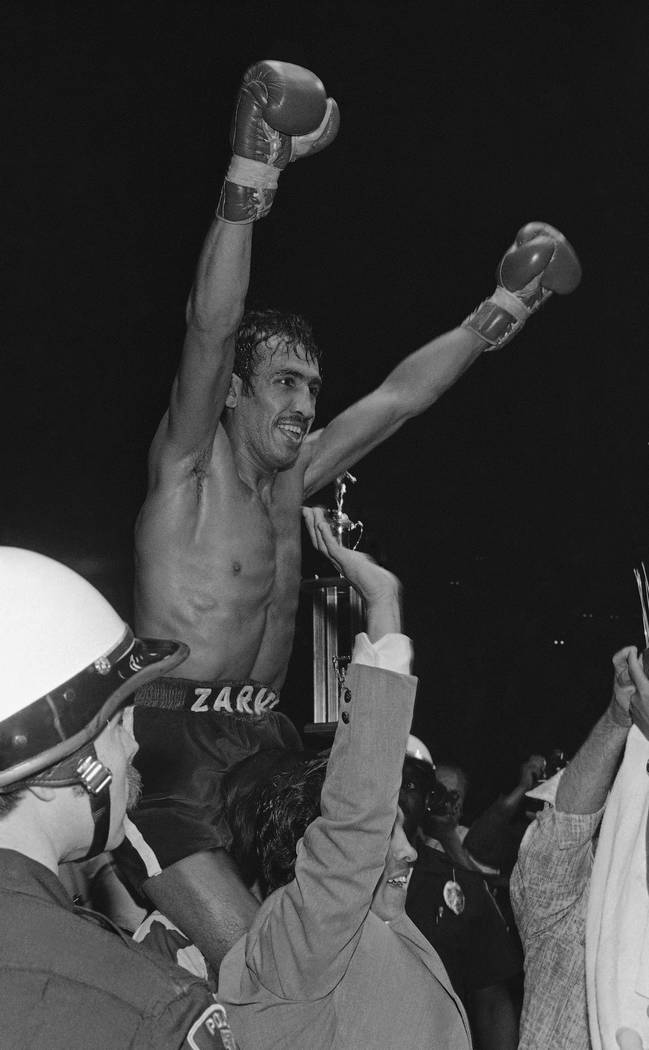 Bantamweight champion (WBC) Carlos Zarate raises arms in victory aftor knocking out the WBA champ, Alfonso Zamora, in the fourth round of a 10 round bout Saturday, April 23, 1977 in Los Angeles. It was Zarate's 47th triumph, his 46th by knockouts, without defeat or draw. Neither fighter had his title at stake. (AP Photo) 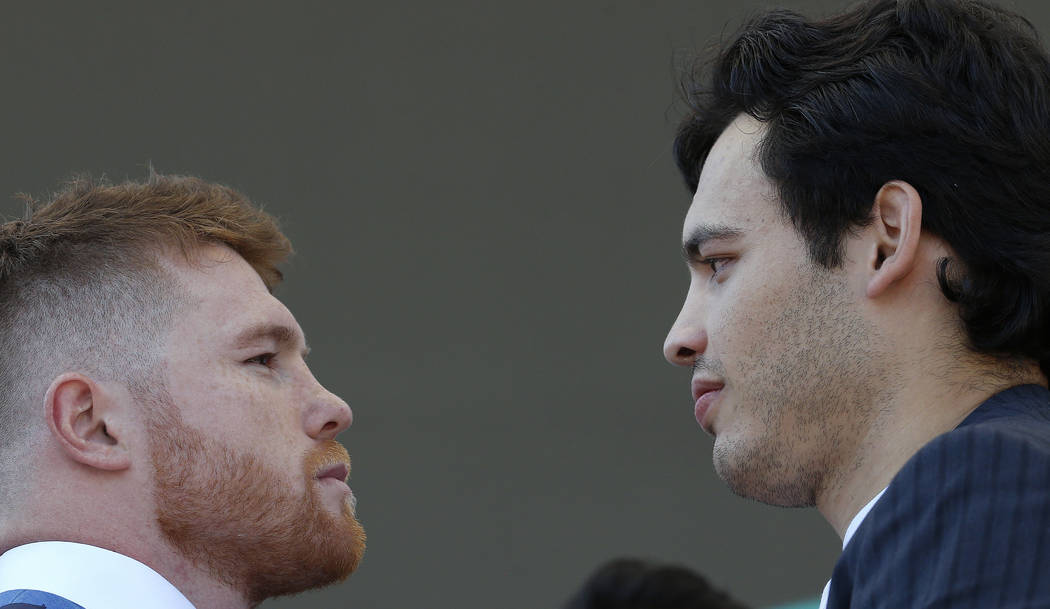 Mexican boxers Saul &quot;Canelo&quot; Alvarez, left, and Julio Cesar Chavez Jr., are presented during a press conference in Mexico City, Monday, Feb. 20, 2017. Alvarez and Chavez were face-to-face for the first time Monday, the first stop on a promotional tour of their May 6th Las Vegas showdown. (AP Photo/Marco Ugarte)

The disdain the two Mexican fighters have for each other has led to a sold out T-Mobile Arena on Saturday, and could draw 20,000-plus spectators. Three Strip hotels will host closed circuit viewings, and many homes are expected to buy the HBO pay-per-view event to give De La Hoya and his Golden Boy Promotions a nice check after the Cinco De Mayo weekend.

“Just like the old days, you feel the electricity in the air,” De La Hoya said. “There’s animosity toward each other. I can’t really explain it. There’s a lot of pride at stake. They have many years around each other, and you have to go back.

The hate and hype explains why De La Hoya called Alvarez-Chavez Jr. the most anticipated bout ever between two Mexicans, and there have been some really good ones, especially in Las Vegas.

“I wish I had a crystal ball to see how this will play out, but in terms of how big this event is, and how popular the fighters are, yes, it is the biggest,” De La Hoya said. “In terms of action, I can see this fight unfolding like Erik Morales and Marco Antonio Barrera.”

Alvarez and Chavez have a long way to go if they want to be mentioned on the same level of the Morales-Barrera trilogy, arguably the best series in boxing history.

However, there are some similarities between the two set of rivals. Here’s a look back at some of the greatest all-Mexican fights in Las Vegas history:

Jessie Vargas doesn’t hesitate when asked to name his favorite fights of all time.

The epic series started with Morales defeating Barrera by split decision at the Mandalay Bay Events Center on Feb. 19, 2000. Barrera took the next two at the MGM Grand Garden with a unanimous decision on June 22, 2002, and a majority decision on Nov. 27, 2004.

Ricardo Jimenez, a longtime publicist for Top Rank, was ringside for the three fights and was on both corners. Jimenez represented Barrera for the first fight and Morales for the last two bouts.

“Barrera was very quiet,” Jimenez said. “Morales was opposite and made it personal.

“Chavez Jr. is a lot like Morales. He needs it to be personal to be motivated. It’s rare when you find real animosity between fighters. I think that’s the case with Canelo and Chavez, just like Barrera and Morales.”

Jimenez said the battle between Juan Manuel Marquez and Barrera doesn’t get the credit it deserves.

“I think it’s one of the best fights between Mexicans,” said Jimenez, who covered numerous fights for La Opinion. “It was high quality. They were both pace fighters and both wanted to be the ones to lead.

“It gets forgotten because of the styles. Fans wanted to see a brawl like what Barrera did with Morales.”

Carlos Zarate ruled the Mexican boxing scene in the 1970s.

Zarate lost in an upset against his former stablemate, Lupe Pintor, with a split decision at the outdoor venue at Caesars Palace on June 3, 1979. Many viewed the decision as a robbery and had Zarate as the winner.

It was a crushing loss for Zarate, who walked away from the ring for seven years before returning in 1986.