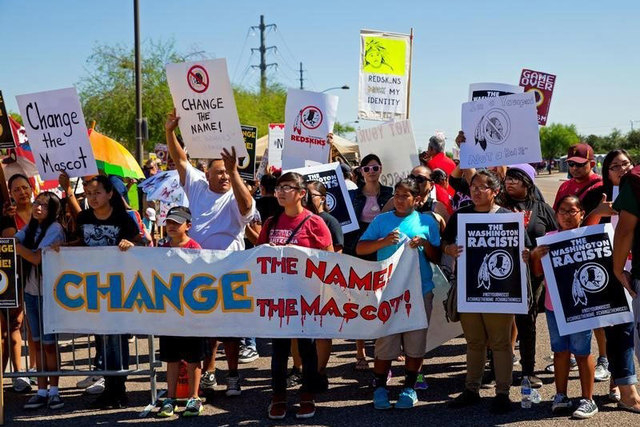 U.S. District Judge Gerald Lee in Alexandria, Virginia, said he agreed with the U.S. Patent and Trademark Office that the team’s trademarks disparage Native Americans and that the law allowing for cancellation did not violate free speech rights of the U.S. Constitution.

Amanda Blackhorse, one of five Native American activists who in June 2014 persuaded the trademark agency to void the Redskins’ registrations, told Reuters she was “overjoyed” by the decision and hoped the team would now change its name.

“This has been a long time coming,” she said.

Team President Bruce Allen said in a statement the NFL franchise has “proudly used the name” for more than 80 years and vowed to appeal.

The Redskins had filed a lawsuit last August seeking to overturn the cancellations by the trademark agency, which said a substantial number of Native Americans found the trademarks offensive.

That decision put more pressure on the Washington club to change its name following decades of criticism by Native Americans among others who call it a slur.

A canceled trademark deprives the club of the ability to use the federal trademark symbol and to block import and sale of counterfeit Redskins goods. However, it can still use the “Redskins” name.

The Redskins had argued that the provision of the federal Lanham Act that allows the government to void disparaging trademarks violated the U.S. Constitution’s First Amendment, which protects freedom of expression.

However, Lee said the trademark registration program was government speech, not private speech, allowing officials more leeway to determine what messages they want to approve.

The judge relied on the U.S. Supreme Court’s decision in June to uphold Texas’ refusal to issue specialty vehicle license plates displaying the Confederate flag, which some consider a symbol of racism. Texas’ actions were government speech, the high court said.

The U.S. Justice Department, which intervened in the case, said in a statement it was pleased the court upheld the statute’s constitutionality.

The Redskins, founded in 1932, have won three Super Bowls and are one of the NFL’s marquee franchises.