John Saccenti thought he would have answers before the season on what future Las Vegas Bowls would look like.

And then it became during the season.

And now it likely won’t be until after the national championship game Jan. 7.

As the bowl’s executive director, no one is more anxious than Saccenti to finally get those elusive answers since the bowl’s days at Sam Boyd Stadium are nearing an end. It will move into the new Raiders stadium beginning in 2020.

“We have submitted our proposals to the conferences,” he said. “We’re waiting to see how they want to shake things out and who they want in what position and what the money’s going to cost.” 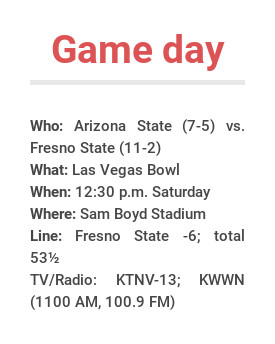 “You’re working on a six-year deal, but it’s not just our negotiation going on,” Saccenti said. “The Pac-12, for example, they’re not only negotiating with us, they’re negotiating with seven other bowl games. So sometimes things can get slowed up on one game, it slows up another game, and every other bowl around the country is negotiating at the same time, so it’s a little drawn out.”

The most likely scenario is for the Las Vegas Bowl to pair the Pac-12 against another Power Five conference at some point between Christmas and New Year’s Day beginning that year, but Saccenti said many options are on the table.

“We’re still talking to the Mountain West as well,” Saccenti said. “They have had offers from other places to potentially look at. We are talking to two Power Fives, though.

“I’d hate to say it’s going to be (that kind of matchup) because we don’t know how everything is going to shake out.”

There also could be a movement to expand the College Football Playoff from four to eight teams, with some power-conference administrators telling The Athletic that such a discussion should at least take place.

Whether playoff expansion would affect the Las Vegas Bowl is another question.

“I think it depends on what it looks like,” Saccenti said. “I’m a big believer in keeping it at four because I like it at four. I think it makes the regular season a little bit better. I think you run the risk of potentially destroying other bowl games. Not everyone’s going to be able to play in that playoff, and when you talk to these kids here today, the bowl-week experience that they had, it would be a shame for some of them to lose that.”

No matter what happens, the bowl is likely to move up in stature, and instead of getting the sixth choice of the Pac-12, perhaps will receive the third. If it’s Pac-12 No. 3 versus the third selection from the Southeastern or Big Ten conference, the Las Vegas Bowl will immediately draw more national attention.

But that doesn’t mean the bowl will be immune to NFL-quality players deciding to skip the postseason game to avoid injury. That’s what Arizona State wide receiver N’Keal Harry decided leading up to this bowl.

“This is still a business for a lot of these young players,” Sun Devils coach Herm Edwards said. “They know their life’s work is still ahead of them, and if they have an opportunity to play pro football, good for them.

“I had that conversation with N’Keal long before this game even appeared, ‘What are we going to do if we get in a bowl?’ He made the right decision for him, and he understood that.”

If the bowl moves on from the Mountain West, that conference would have to find a place to send its champion. It could be another bowl already affiliated with the league, or perhaps Phoenix could be the landing spot.

Fresno State coach Jeff Tedford said such a decision was above his pay grade.

“I have not sat down and thought about that, so I would not be educated enough to answer that question realistically,” he said. “It’s almost a moving target on what happens. Those are for the (university) presidents. Those are for the commissioners of the conferences.”