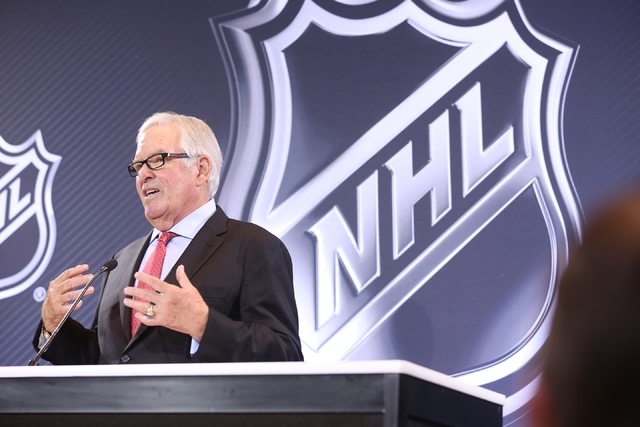 Owner Bill Foley said Thursday the final design on the Las Vegas NHL expansion team’s logo and the color scheme that will be used on its uniforms still has not been finalized. Foley said the unveiling of the name “Las Vegas (blank) Knights” might wait until early November.

Foley said earlier this month that “Knights” will be part of the team name and it would be either the Silver Knights, Desert Knights or Golden Knights.

“We had a webinar (Thursday) with adidas and the NHL, and we’re still tweaking the logo and the use of the colors,” Foley said. “It probably means we’re going to have to push back the big announcement because it’s going to take time to get everything printed on the shirts and hats. The jerseys will take a little longer to produce.”

Foley initially was hoping for an announcement to coincide with the first-ever NHL games at T-Mobile Arena on Oct. 7-8. But when the name, logo and colors were still in progress, the date became late October. Now, that time frame is unlikely.

“The other issue is Toshiba Plaza,” Foley said. “We want to do the unveiling there. But there are very few open dates in October because the arena is being used most of the month. It’s a little more open in November.”

Foley said the team and adidas are meeting again early next week in the hopes of finalizing the logo and color scheme. The NHL has to give its approval once the name, logo and colors are officially submitted for use.

“We’re getting real close,” he said. “But we want it to be perfect.”