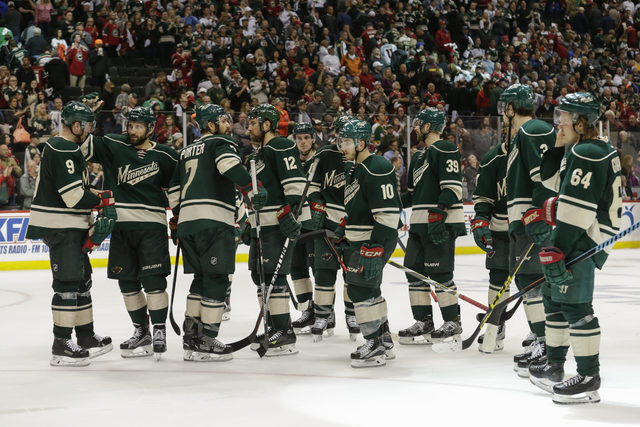 The Minnesota Wild, shown after a game against the Dallas Stars on April 24, 2016, and the Columbus Blue Jackets were the last teams to join the NHL, in 2000, before Las Vegas was awarded a franchise. (Tim Warner/AP)

Bill Foley was 49 years too late.

Had the billionaire businessman tried to buy a National Hockey League franchise in 1967, he could have gotten in for $2 million instead of the $500 million he is spending to bring the NHL to Las Vegas.

In 1966, the NHL was a six-team league composed of Toronto, Montreal, Boston, New York, Detroit and Chicago. But the following year, the league doubled in size with expansion franchises in Los Angeles, Pittsburgh, St. Louis, Philadelphia, Minneapolis and Oakland, California.

Each of those teams paid $2 million to join. But the “Expansion Six,” as the Kings, Penguins, Blues, Flyers, North Stars and Seals were called, was only the beginning. Over the next four decades, the NHL would dramatically fluctuate in size, eventually growing to 31 teams for the 2017-18 season with the addition of Las Vegas.

Why did the NHL expand as much as it did? Partially because of TV giving potential markets exposure to the sport it didn’t previously have. Also, markets, particularly in Canada, had the fan support to make it work.

From a Canadian perspective, expanding beyond Montreal and Toronto had to happen. “Hockey Night in Canada” was the country’s highest-rated TV program, and the NHL realized it could thrive in new markets in Canada.

In 1970, the Vancouver Canucks joined, paying $6 million. In 1979, four former World Hockey Association teams merged into the NHL, including Edmonton, Quebec City and Winnipeg. Those teams paid $7.5 million apiece, and the Oilers, led by Wayne Gretzky, won five Stanley Cups in a seven-year span from 1984 to 1990.

In 1980, the Atlanta Flames, who were formed in 1972, moved to Calgary. In 1992, Ottawa would join the NHL. And after Winnipeg lost their Jets to Phoenix in 1996, history repeated itself in 2011, when hockey failed in Atlanta for a second time and the Thrashers were sold and moved back to Winnipeg and rebranded the Jets.

But in the U.S., expansion was a constant part of the NHL’s plan. Buffalo also joined in 1970, when Vancouver came into the league. In 1972, the Islanders gave the New York metropolitan area a team to compete with the Rangers, but also as an answer to the upstart World Hockey Association, which was trying to gain a foothold in New York, first with the Raiders, then the following year with the Golden Blades.

The Islanders would be among the most successful of the true expansion teams, making the playoffs in their third season, then winning four straight Stanley Cups from 1980 to 1983.

In 1974, Washington and Kansas City were added. The Capitals have been a secure franchise for 41 years, while the Scouts lasted only two seasons before moving to Denver and being renamed the Rockies. The Rockies eventually moved to New Jersey in 1982 and were renamed the Devils, who won the Cup in 1995, 2000 and 2003.

By 1991, when the NHL returned to Northern California with the San Jose Sharks, the price had escalated to $45 million. Ottawa and Tampa Bay paid the same price the following year when they joined.

In 1993, Florida and Anaheim joined the league, paying $50 million apiece. The Mighty Ducks, as they were initially called, also had to pay Los Angeles a $25 million indemnification fee for joining the Kings in Southern California.

The value of being in the NHL increased to $80 million when Nashville was awarded a team in 1998. Atlanta paid the same expansion fee when hockey returned to that city in 1999. And when Minnesota got its NHL team back along with Columbus in 2000, it was still $80 million to join, as the NHL grew to its current 30-team league.

That would be the last time the league expanded. Until now.

With the NHL’s added revenue streams, particularly its 12-year, $5.2 billion TV deal with Rogers Communications, getting in for $80 million may seem like a bargain. But the real bargain was in 1967.

The Flyers almost didn’t make it, as a power outage in Philadelphia prevented the team from conducting its business with banks in New York. But owner Ed Snider managed to get the $2 million check to the league in time. In 2014, the Flyers were valued by Forbes magazine at $625 million, seventh-best among the NHL’s 30 teams.

And as good as the Flyers’ investment was, consider the Canucks. In 1970, Vancouver paid $6 million to join the NHL. Today, they are worth $800 million.

According to Forbes, the Maple Leafs are the NHL’s most valuable franchise, with a value of $1.3 billion, followed by the Rangers at $1.1 billion and the Canadiens at $1 billion.

Foley had to pay a lot more than anyone before him to join the NHL. But if he can come close to growing his investment the way Snider did, he’ll look back on that $500 million as money well spent.