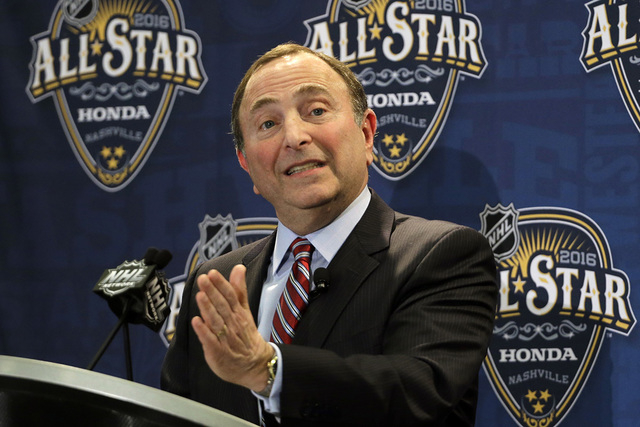 When NHL commissioner Gary Bettman addressed the media Monday in Pittsburgh before Game 1 of the Stanley Cup Final, he was vague, almost evasive, about expansion.

But if you look closer at his comments, Bettman said a lot more than it seemed.

When Bettman explained the three scenarios the league was contemplating — expand by one or two teams, wait a year or put expansion on hold indefinitely — he covered both ends of the rink as far as Las Vegas and Quebec City are concerned.

The league’s nine-member executive committee meets this week, likely on Tuesday, though NHL deputy commissioner Bill Daly refused to confirm the date. The group is expected to recommend Las Vegas to join the league for the 2017-18 season while deferring Quebec City until 2018-19.

When the NHL’s Board of Governors meets June 22 in Las Vegas, it is expected to rubber stamp the recommendation, culminating in a historic day, as the city will get its first major league sports franchise after decades of campaigning.

If you think Bettman doesn’t already know the end game of this process that began in July, skate yourself over to the penalty box and serve your two minutes for being ignorant.

Why let Las Vegas launch in 2017 with only 15 to 16 months to prepare instead of two years, as the last two expansion teams — Minnesota and Columbus — did in 2000? Because billionaire businessman Bill Foley and his group are way ahead of the game in terms of preparation.

• The core of the fan base is established with 14,000 season-ticket deposits secured.

• He has a lease agreement with T-Mobile Arena that is favorable and gives him a chance to turn a profit.

• His practice facility in Summerlin has the OK to get built in time for 2017.

• He has had talks about a regional TV contract.

• He has passed the NHL’s extensive vetting process with no issues.

In the short time Foley has been involved in the process, he has impressed most owners with his persona. He’s a regular guy who just happens to be a billionaire. To date, not one NHL owner has publicly spoken out against Foley specifically or his bid. Plus, for a league that has several teams operating in the red, the millions each team will receive from Foley’s $500 million expansion fee to join the NHL no doubt will come in handy.

Also, NHL officials said the league is not worried about the NFL possibly coming to Las Vegas; on the contrary, a move by the Oakland Raiders shows the strength of Foley’s expansion application. It stands on its own, and he’ll have the jump when it comes to corporate sponsorships for this team. In fact, Foley is ready to broker deals with numerous companies, locally and nationally, once he gets approved, something the NHL has seen as a positive for the market’s ability to support hockey.

As Bettman said Monday, “We’re judging the application we have before us on the merits of that application.”

So why wait on Quebec City? For starters, the Canadian dollar continues to fluctuate wildly, and the owners are concerned about inflation and putting another team in Canada at this point. By waiting until 2018, the NHL buys time in the hopes the Loonie stabilizes itself. On Friday, the Canadian dollar was worth 77 cents in U.S. currency.

Quebecor chairman Brian Mulroney, who heads the city’s expansion bid, acknowledged as much Friday, pointing toward the future in his remarks for hockey to return to Quebec City.

But there’s another possibility for Quebecor — relocation — which could come sooner than 2018. The Carolina Hurricanes could be available in light of the recent news that owner Peter Karmanos is having legal issues with his sons, along with the fact the team has been losing money. The Hurricanes lost $13 million in 2014-15 and had the lowest home attendance in the NHL.

By selling, Karmanos recoups most of his losses, Quebec City gets its team, probably for less than $500 million (Forbes Magazine put the value of the Carolina franchise at $225 million in November), and the NHL probably would impose a relocation fee of $50 million to $75 million for the owners to divide.

It keeps the Eastern Conference at 16 teams, and it also gives the NHL time to reopen the expansion process in the hopes that a city west of the Mississippi might apply.

At the top of the wish list is Seattle. But that city doesn’t have a suitable place to play, and until the arena issue gets sorted out, Seattle is on the back burner.

Kansas City, Houston and Portland have NHL-quality buildings, and if there are ownership groups willing to invest, it could lead to a 2018-19 expansion and give the West 16 teams after Las Vegas becomes the conference’s 15th team.

What about Las Vegas’ big day? Don’t expect a party in Toshiba Plaza on June 22. Foley is likely to be low-key that day, opting to delay a public celebration until later in the summer when the team’s nickname and logo are announced.

Dan Quinn, general manager of T-Mobile Arena, said he has not received a request from Foley or the NHL to use Toshiba Plaza on June 22, adding that one could be honored on short notice. He also said the area could easily hold 10,000 people for an event such as an announcement.

But June 22 will be a day for Las Vegas to celebrate. And who knows? Maybe Bettman won’t get booed as is normally the case when he visits an NHL city.