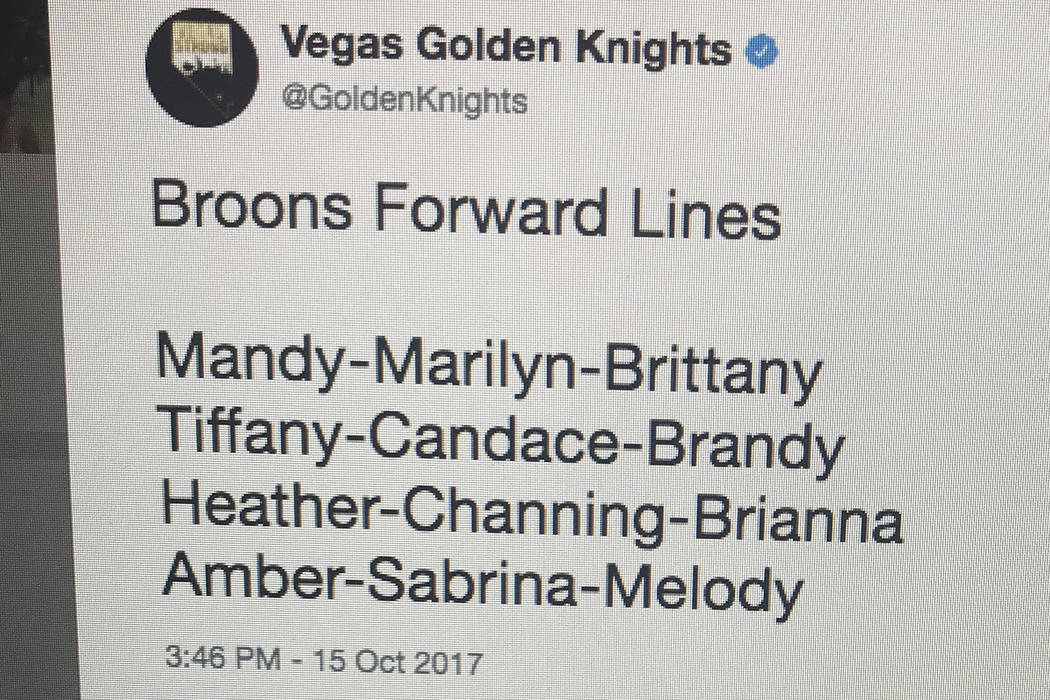 But did the team’s posts go too far Sunday? The Golden Knights thought so.

Prior to the game against Boston, the Knights’ official Twitter account posted a series of tweets with the Bruins’ lineup and scratches using female names rather than the actual players.

The posts quoted a scene from the Boston-based movie “Ted,” but it didn’t go over well with some followers, who accused the team’s social media department of sexism.

The tweets were deleted Monday morning and by 11 a.m. the Knights issued an apology.

“Before Sunday’s game against the Boston Bruins, we issued a series of tweets quoting a Boston-based movie with a bear as its main character that were in poor taste. By no means were the tweets intended to disparage females or female hockey players in any way,” the team said in a statement.

“We do not condone sexism in any form and fully support the inclusive culture of hockey that makes our sport great. We accept full responsibility for our actions and apologize to those who were offended.”

“Ted” is an R-rated comedy released in 2012 that stars Boston native Mark Wahlberg and a talking teddy bear voiced by Seth MacFarlane, the creator of “Family Guy” and other irreverent animated TV shows.

In one scene, the bear asks Wahlberg’s character to guess the “white trash name” of the female cashier it met recently, and Wahlberg rattles off 50 names before asking if it’s any of those names with “Lynn” after.

However, the “Ted” reference was lost on some Twitter followers, who expressed their dismay even after the joke was explained by the team in a follow-up post.

The Knights’ Twitter account, which is overseen by Eric Tosi, the team’s vice president of communications and content, and Dan Marrazza, the director of digital and social media, has established itself as the boisterous rookie in the locker room.

This summer, the Knights embroiled in Twitter beefs with the Los Angeles Kings and Montreal Canadiens.

Before the opening faceoff of every game, @GoldenKnights announces the opposing team’s lineup using a pop culture reference intended to be humorous.

For the preseason game against Colorado on Sept. 28, the Avalanche’s forwards included “Cartman” centering a line with “Kenny” and “Kyle” on the wings, which is a nod to the Comedy Central cartoon “South Park.”

Before the Knights’ game at Arizona on Oct. 7, the home team’s defensive pairing and starting goalie were characters from the movie “Coyote Ugly.”

“We want to be extremely conversational and engaging, and I think what we do more than other clubs is respond and engage,” Tosi said of the team’s social media philosophy. “When some teams have made comments towards us, we’ve had witty responses back. The voice has evolved, but we really want to embrace the entertainment aspect of our city.”

Tosi, who worked for the Bruins for 10 years before being hired by the Knights, acknowledged Sunday’s “Ted” tweets generated more traffic than previous posts with the opposition’s lineup.

The tweets drew hundreds of responses from both sides of the spectrum before being removed. The team also tweeted throughout the game using a Boston accent.

“If a tweet is not on brand or followers find it offensive, delete it, acknowledge it and push forward, and it’s good to hear that’s what they did,” said Richelle Rice, director of social media for Kirvin Doak Communications. “In the social media world, this is not the first or the last time an inappropriate or off-brand tweet will go out.”

Matthew Chmura, the Bruins’ vice president of marketing and communications, did not respond to an email seeking comment on the tweets.

The Knights (4-1) are off to one of the fastest starts for an expansion team in NHL history. Their play has helped galvanize a city and fan base in the wake of the Oct. 1 mass shooting at the Route 91 Harvest festival.

The Knights host Buffalo at 7 p.m. Tuesday at T-Mobile Arena.