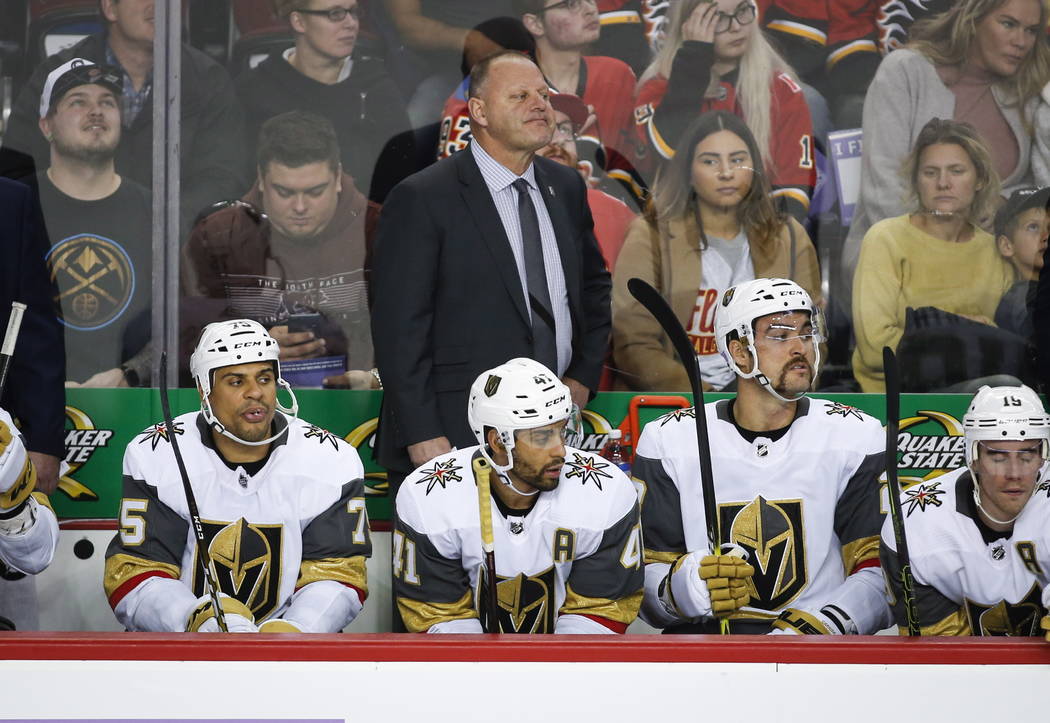 FILE - In this Nov. 19, 2018 file photo Vegas Golden Knights' head coach Gerard Gallant, top center, watches the action during second period NHL hockey game action against the Calgary Flames in Calgary, Alberta. Gallant has insisted over the first two months of the season that the Golden Knights would be fine once they found their rhythm and re-established the type of chemistry that led them to the Stanley Cup Final last season. Apparently, Gallant knew what he was talking about. Vegas has won four straight to move above .500 for the first time this season. (Jeff McIntosh/The Canadian Press via AP, file) 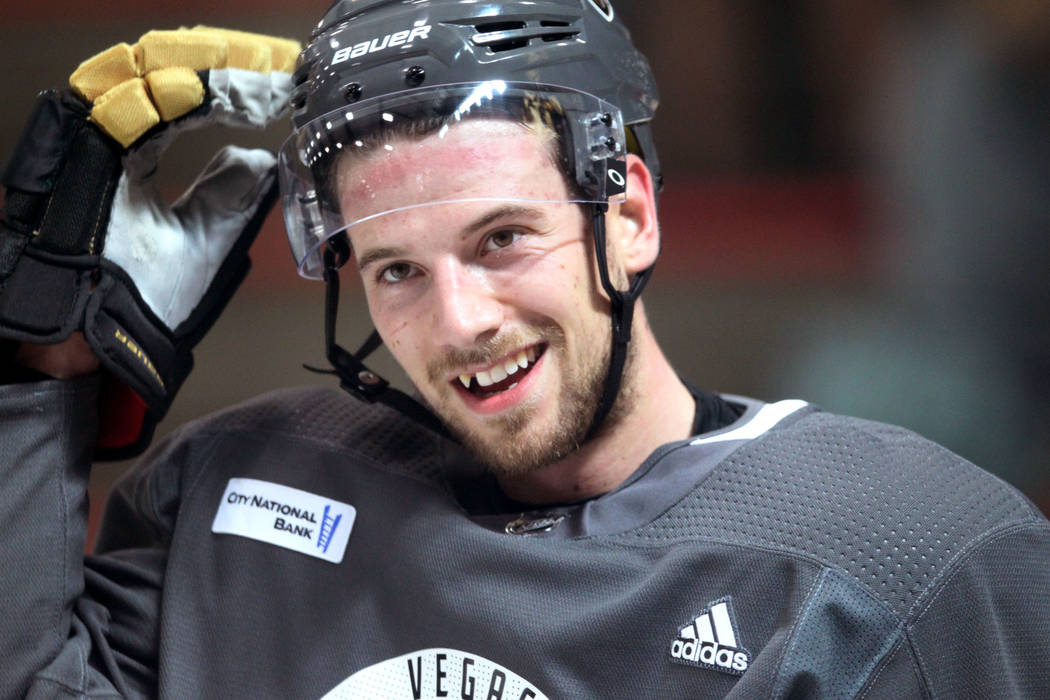 EDMONTON, Alberta — The Golden Knights looked a little different Saturday. Most of them, anyway.

While several players eagerly took a razor to their “Movember” mustaches, Shea Theodore kept his lip rug for a little longer.

”I think it’s a good luck thing, and also I forgot my shaver,” the defenseman said after the Knights’ morning skate at Rogers Place. “I think it’s definitely off when I get back.”

Theodore was one of nine players to grow a mustache during November as part of the NHL’s initiative to support men’s health. Donations throughout the month benefited the Movember Foundation.

William Carrier and Jon Merrill also kept their facial hair, but Colin Miller was among the group ready for a trim.

“It’s nice to have it a little bit tighter,” Miller said. “You look around the league and see all the guys supporting it, everyone looking a little funny. But it’s great to see.”

Ryan Carpenter said his mustache was “pretty bad,” although his wife didn’t notice it was gone until well into their morning conversation on FaceTime.

“She’ll be excited when I come back. She’ll be eager to kiss me more, I guess,” Carpenter said jokingly. “It was a cool thing we got to do as a team, and that the league does it, it’s awesome. It raises awareness.”

Goaltender Marc-Andre Fleury was named the NHL’s third star for the month of November, the league announced Saturday.

Fleury went 9-4 with a 2.32 goals-against average and .920 save percentage in 13 appearances. He led the NHL in victories and shutouts (four) and won his final six starts of the month.

Overall, Fleury has a league-best five shutouts and was tied for the league lead in victories (14) with Toronto’s Frederik Andersen.

Online voting for the NHL All-Star Game opened Saturday, and four Golden Knights are featured on the ballot for the Pacific Division: Fleury, William Karlsson, Jonathan Marchessault and Reilly Smith.

Fans can vote for the four captains in the 3-on-3 tournament through Dec. 23. Write-in votes also can be cast, with the top vote-getter from each division named captain.

Oilers coach Ken Hitchcock can relate to the Knights’ slow start after they lost in the Stanley Cup Final in their inaugural season.

Hitchcock guided Dallas to the title in 1999, and the Stars stumbled to a 9-10-3 record the following season before ultimately losing to New Jersey in the Cup finals.