Gerard Gallant will coach the Pacific Division All-Stars on Jan. 28 in Tampa, Florida, after the Knights secured the top points percentage in the division Tuesday after their 3-0 win over Nashville.

Mathematically, the Kings can’t catch the Knights, so Gallant will be going to Florida. So will Tampa Bay coach Jon Cooper, who will coach the Atlantic Division All-Stars, as the host Lightning have the top points percentage in the NHL at .769. 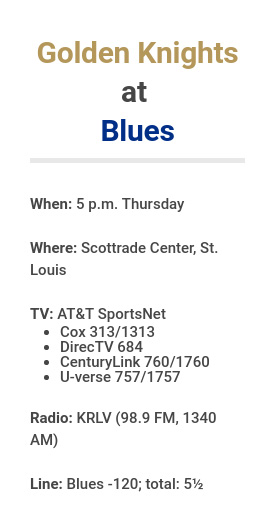 The official announcement from the NHL on the four All-Star division coaches is expected to come after Saturday’s games. The rosters for the All-Star Game are expected to be announced late next week.

“If I am selected, it would be a great honor,” Gallant said Wednesday before the Knights departed for St. Louis, where they will put their eight-game winning streak on the line Thursday against the Blues. “I think the best part of it is you know your team is playing real well and your team is in first place at this time of the season.”

Gallant will be making his second All-Star appearance as a coach. In 2016, he coached the Atlantic Division All-Stars while with the Florida Panthers.

“It’s a lot more than me,” Gallant said. “It’s my coaching staff. It’s our players, who have had an outstanding first half of the season. The organization has had a great first half. We get a reward for that with the All-Star Game.”

But Gallant’s focus is on St. Louis. Same for his players. They know they have a good thing going and don’t need any distractions.

“It’s about competing and getting ready for the next game,” Gallant said. “It’s another big challenge for us. Keep working hard and playing well. The guys are competing, and they’re playing well. They believe in themselves.”

Forward David Perron said the team has learned a lot about itself during this run.

“Even when we don’t play our best game, we find a way to get two points,” he said. “Every day we turn the page and try and get better.”

Perron said the return of goaltender Marc-Andre Fleury has been instrumental.

“Flower not being around as much at the start of the year, and now he’s here, he’s been a big part of the success,” Perron said. “He’s done an unbelievable job keeping us in games, and he’s won us a couple of games.”

Forward Alex Tuch said Fleury’s return has made a noticeable impact off the ice, too.

“He’s one of the leaders on this team,” Tuch said. “He helps us mesh together, and he’s such a great veteran presence to have in the (locker) room. He’s so positive and upbeat and a lot of fun to be around.”

1. Riding the wave. The Golden Knights look to extend their record eight-game winning streak against a St. Louis team that has won two straight and is 14-8 at home. The Blues will be looking to avenge a 3-2 overtime loss to the Knights on Oct. 21.

2. Who’s in goal? Will Marc-Andre Fleury stay in the net after shutting out Nashville on Tuesday? Or does coach Gerard Gallant go back to Malcolm Subban? And does Blues coach Mike Yeo stick with Carter Hutton, the 35-year-old veteran who backstopped St. Louis to two straight wins over Minnesota and New Jersey. Or does Yeo play Jake Allen, who has lost three of his past four starts.

3. Banged-up Blues. St. Louis has battled injuries going back to training camp, and the latest is Jaden Schwartz’s right ankle injury suffered Dec. 9 when he blocked a shot against Detroit. The left wing was having the best season of his career with 14 goals and 35 points when he went on injured reserve.