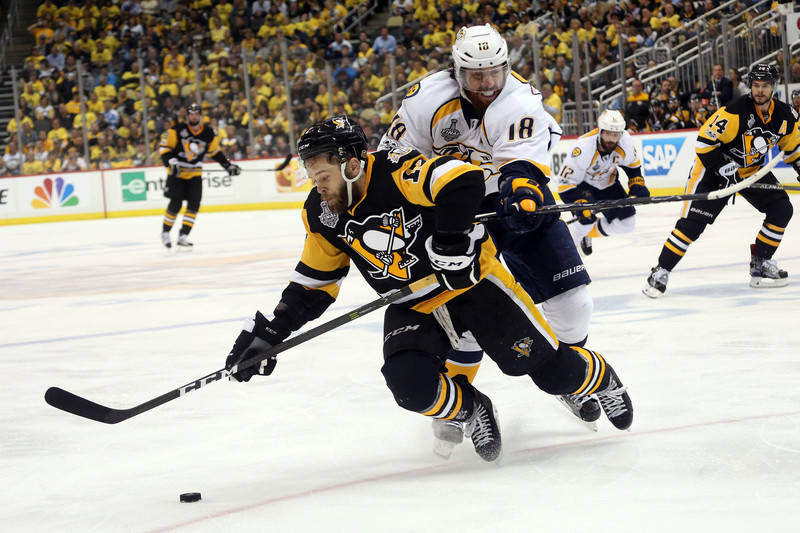 James Neal will miss the start of the Golden Knights’ inaugural training camp.

And the high-scoring forward could be out for the season opener, too.

Neal, who is recovering from a broken right hand suffered during the Western Conference finals in May, will be sidelined an additional two to four weeks, general manager George McPhee said Thursday on the first day of camp at City National Arena.

“He may be a little bit behind everybody else — two, three, four weeks. It’s hard to say at this point,” McPhee said. “The hand is taking some more time to recover than anticipated.”

Neal was hurt during Game 1 of the Western Conference finals against Anaheim but played every game for Nashville during its run to the Stanley Cup finals.

Neal had six goals and three assists in 22 playoff games and finished with one goal and one assist in the Predators’ six-game series loss to Pittsburgh in the finals.

Neal did not skate in any of the Knights’ informal practices before camp. He greeted the media in the locker room Thursday with a handshake using his off hand.

The Knights open the regular season Oct. 6 at Dallas.

“Just kind of moving forward here, getting into the rhythm of practice days and getting back into that routine,” Neal said. “Everything’s been running smoothly. I’m just looking forward to getting that first practice out of the way.”

Neal tallied 23 goals and 41 points last season for Nashville, and the 30-year-old has never scored fewer than 21 goals in his nine NHL seasons.

Once healthy, Neal is expected to skate on the top line and No. 1 power-play unit for the Knights.

“I’ve settled in nicely here,” Neal said. “I made Vegas home right away, and I look forward to being a big part of this organization moving forward.”

The status of injured forwards David Clarkson and Mikhail Grabovski remain up in the air.

Neither player has been medically cleared, and McPhee said the team is awaiting the results of Thursday’s physicals before making a decision.

“I’m not (expecting them to play),” McPhee said, “but that’s up to the doctors.”

Clarkson, who was taken from Columbus in the expansion draft, has been out since March 2016 with a career-threatening back injury. Grabovski missed all of last season with the Islanders because of post-concussion syndrome.

Clarkson did not have a stall in the Knights’ locker room at City National Arena and Grabovski’s was empty, which could be a telling sign.

Should Clarkson and Grabovski retire, the combined $10.25 million remaining on their contracts would not count against the Knights’ salary cap.

The Knights’ first on-ice practices begin Friday at City National Arena. The first session (practice and scrimmage) starts at 9:30 a.m., and the second session is scheduled to begin at noon.

Practice sessions are open to the public on a RSVP basis.