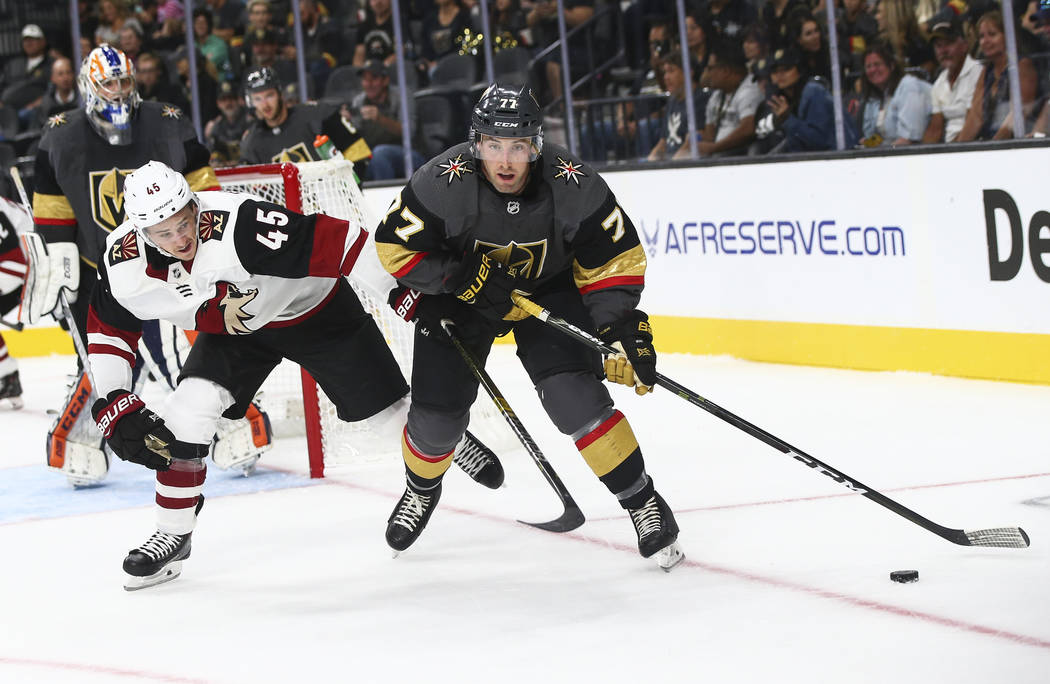 As an undersized defenseman growing up, Brad Hunt needed a way to stand out.

“The power play was one way that I really focused on,” he said.

Hunt could be the talisman for the Golden Knights’ ailing power play, which ranks last in the NHL at 8.3 percent (2-for-24).

After failing to produce a goal in the first six games, the No. 1 unit scored with the man advantage in each of the past two games since the 5-foot-9-inch Hunt entered the lineup.

“He sees the ice real good and he puts pucks to the net,” coach Gerard Gallant said. “He’s a guy that can skate real well and he moves the puck well. His vision’s really good and he’s a good offensive player, so we’ll give him an opportunity to be there and then we’ll load up the other unit with (Shea Theodore) and (Colin) Miller, couple of big shots and guys who can skate, too. It’s just something to try.”

Hunt forged an NHL career due in large part to his ability to run a power play.

Of his 28 career points entering Wednesday’s game against Vancouver at T-Mobile Arena, more than half (16) have been with the man advantage.

He has five career goals, four of which came on the power play.

“You watch (Colin Miller) on our team and guys across the league and you pick up little things,” the 30-year-old Hunt said. “But it’s always been something where even from a young age, I always excelled at that part of my game.”

The Knights’ success on the power play has coincided with Hunt being in the lineup.

Last season, the Knights’ power play clicked at a 23.3 percent success rate (31-for-133) in Hunt’s 45 games. That percentage over a full season would have tied for sixth in the league.

The Knights scored a power-play goal in nine straight games from Jan. 21 to Feb. 8, with Hunt appearing in eight of those contests.

During a 14-game stretch from Jan. 21 to Feb. 19, the Knights went 15-for-38 with the man advantage. Hunt played in every game but one and had seven points, including five on the power play.

“He has great patience and he’s smart with the puck. He makes every little plays out there that are simple and effective,” leading scorer Jonathan Marchessault said. “He’s been known to be running a power play for all his life. He did it well last game. Last year he did it when he was in the lineup. He’s good at what he does and maybe we should take more advantage of a guy like that.”

The Knights were 0-for-16 with the man advantage before Hunt made his first start against Buffalo on Oct. 16 and was inserted on the No. 1 power play with Marchessault, William Karlsson, Reilly Smith and Max Pacioretty.

That unit produced the first goal in the 4-1 victory over the Sabres when Smith and Karlsson combined to set up Marchessault.

“I think (a reporter) said we were like 7-for-7 on zone entries, and that’s a huge part of it because you’re wasting less time going back to your zone to get the puck,” Hunt said. “If you get it in the zone and you’re comfortable, you’re set up, and that’s when the plays happen.”

Hunt earned the secondary assist on Karlsson’s power-play goal in the first period of Saturday’s 3-1 victory over Anaheim.

The Knights’ two goals on the power play are tied with Arizona for last in the league.

“That’s the big thing about all power plays,” Hunt said. “As soon as you kind of get in a rut, you just want to go back to the basics. Get pucks to the net, and that’s when good things will happen, and then you start to gain your confidence as a unit.”

More Golden Knights: Follow all of our Golden Knights coverage online at reviewjournal.com/GoldenKnights and @HockeyinVegas on Twitter.^