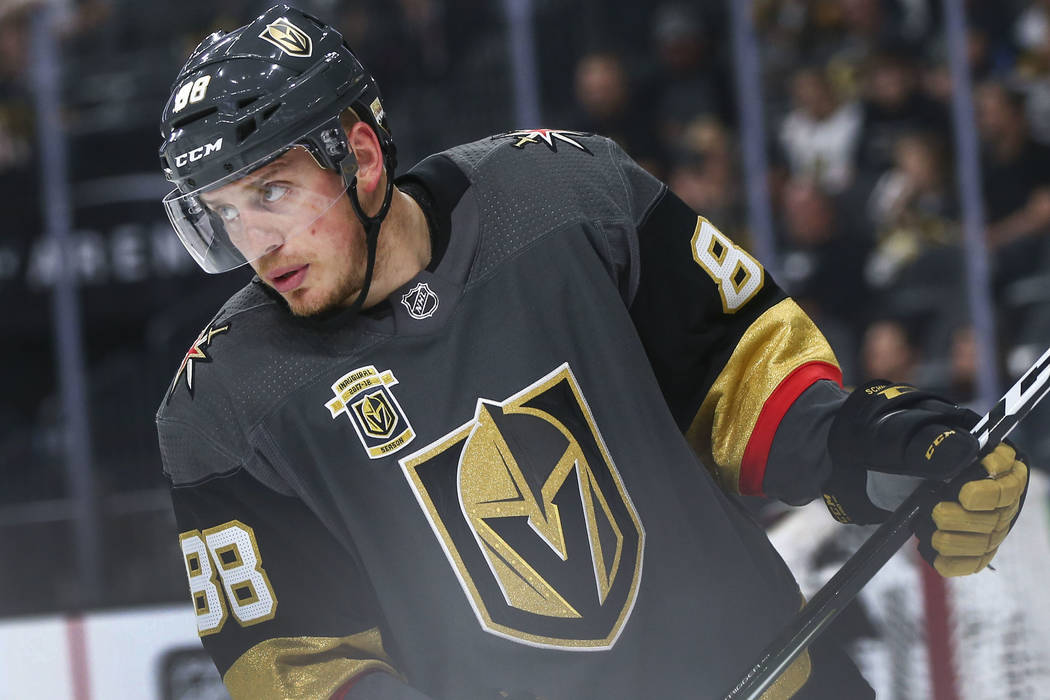 In this May 4, 2018, file photo, Golden Knights defenseman Nate Schmidt (88) looks on during a break against the San Jose Sharks in the second period of Game 5 of an NHL hockey second-round playoff series at T-Mobile Arena in Las Vegas. Chase Stevens Las Vegas Review-Journal @csstevensphoto 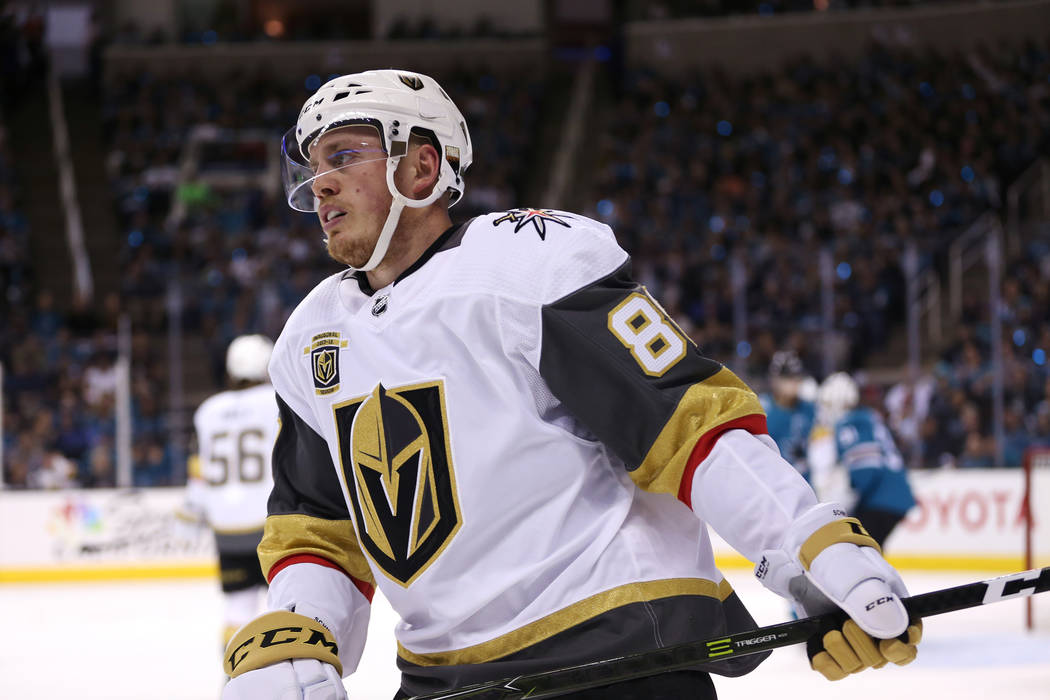 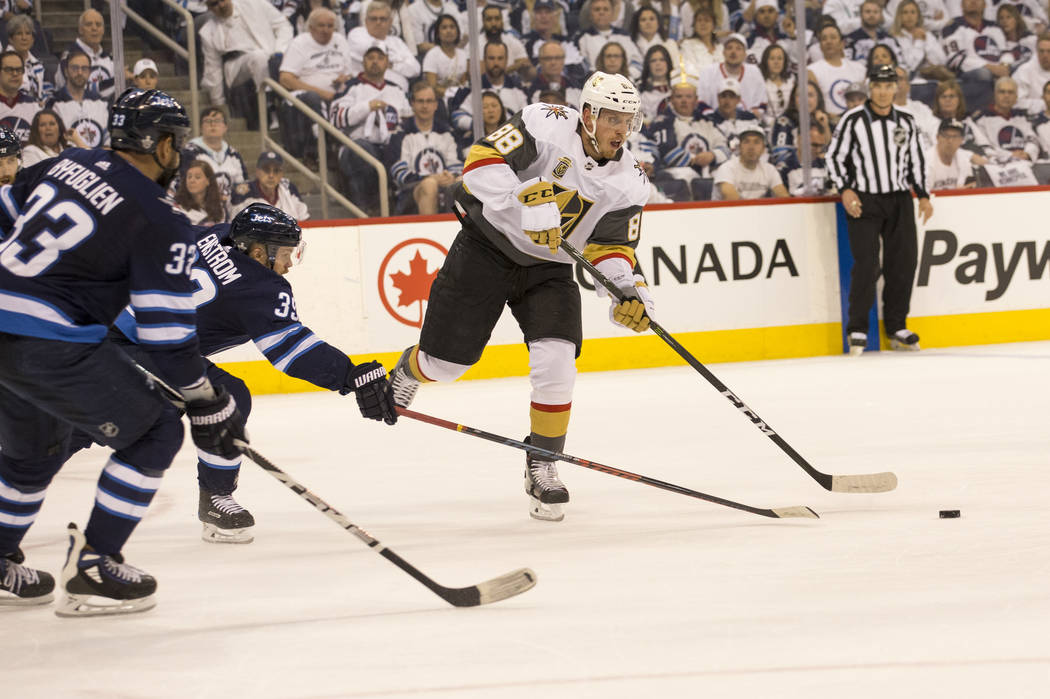 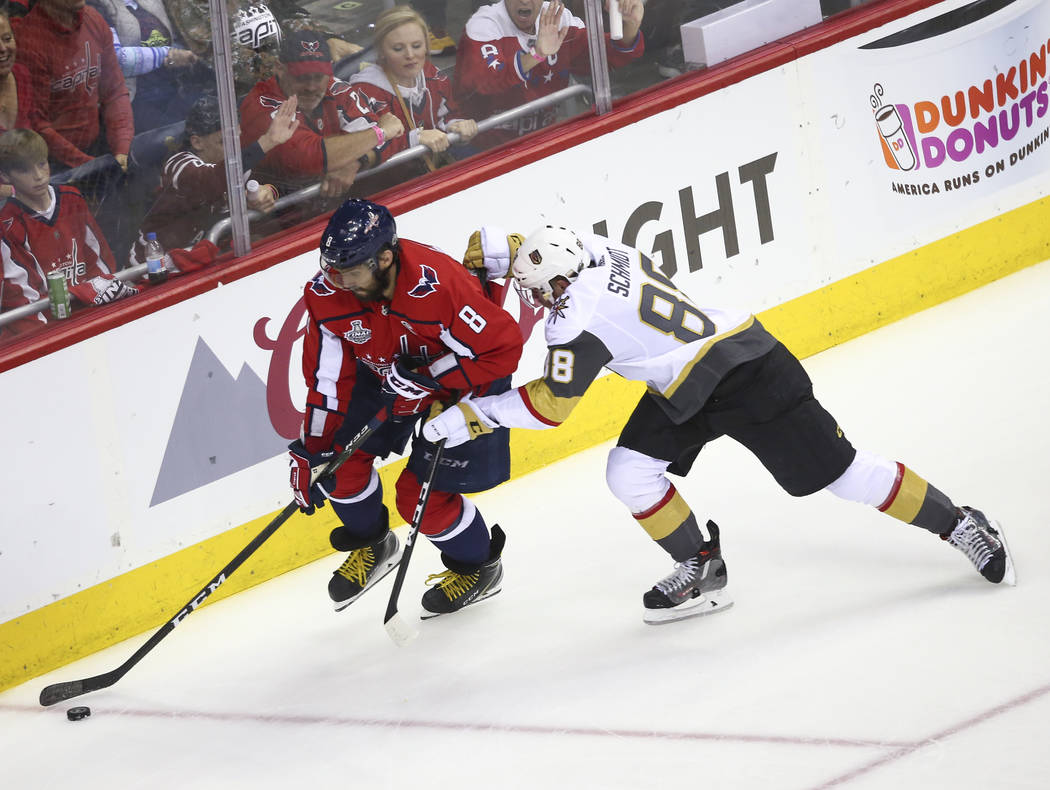 Nate Schmidt offered a passionate defense of himself Sunday after the NHL announced the Golden Knights defenseman tested positive for a performance-enhancing substance.

The team had Schmidt’s back, too.

Schmidt received a 20-game suspension for violating the NHL/NHLPA Performance Enhancing Substances Program, a punishment he characterized as “utterly shocking” in a lengthy statement.

“While I support having a strong Performance Enhancing Substances Program in place for our sport, it is difficult to accept this suspension. I understand that I will miss these games, but I do not agree with the suspension and I will not accept being labelled a cheater,” Schmidt said.

“I have worked my whole life to become an NHL player, and I’m extremely proud to be a player in the NHL. I have never cut corners in order to achieve this goal. I am grateful for the support of the entire Golden Knights organization and I can’t put into words how disappointed I am that I will not be on the ice at the beginning of the season to help my teammates work towards another Stanley Cup run.”

In announcing the suspension, the NHL did not reveal the substance for which Schmidt tested positive or when the test was conducted. His appeal was denied by an independent arbitrator. It was unclear when Schmidt’s hearing was held.

Schmidt’s agent, Matt Keator, said Sunday he could not comment on what substance was found in his client’s system.

“While we respect the NHL/NHLPA Performance Enhancing Substances Program and are committed to its success, we strongly disagree with the suspension,” the Knights organization said in a statement. “We firmly believe that the presence of a trace of the banned substance was accidental and unintentional. Based on our conversations with Nate, analysis from independent medical experts and sworn testimony from the parties involved, we believe it is clear Nate was not able to reasonably ascertain how the substance entered his body.

“Nate is an honest person with high moral character and great integrity. We will stand by him and support him during this time.”

Schmidt is eligible to return Nov. 18 at Edmonton. He can practice with the team during training camp, which opens Sept. 13, but is not permitted to play in any of the Knights’ preseason games.

This is Schmidt’s first positive test, which comes with a mandatory 20-game suspension under terms of the collective bargaining agreement, and he stands to lose approximately $482,000 in salary.

A second violation of the Performance Enhancing Substance Program results in a 60-game suspension. A third violation carries a permanent suspension, although a player is eligible to apply for reinstatement after two years.

Schmidt, 27, is the first NHL player suspended for a performance-enhancing substance since Arizona’s Jarred Tinordi in 2016 and only the sixth since the testing program began with the 2005 collective bargaining agreement.

The NHL did not provide further comments on Schmidt’s suspension.

“It was utterly shocking to be informed that I tested positive for a microscopic amount of a tainted substance. Not only did I not intentionally take a banned substance, I could not have received any performance enhancement benefit from the trace amount that inadvertently got into my system at a level that was far too small to have any effect. This low amount was consistent with environmental contamination that I could not possibly have prevented.”

“One of the experts in environmental contamination who testified on my behalf at the Appeal hearing described the amount of the substance found in my system — 7 billionths of a milligram/mL — as the equivalent of a pinch of salt in an Olympic-sized swimming pool. Another expert analyzed a sample of my hair and concluded there was no evidence of intentional use. The Vegas Golden Knights track players’ strength and performance metrics and my results have remained constant over the past year.”

Schmidt posted career highs in goals (5), assists (31), points (36) and games played (76) last season after being selected from Washington in the expansion draft and quickly became a fan-favorite.

He led the team in average ice time (22:14) and emerged as the Knights No. 1 defenseman, matching against the opposing team’s top forwards.

Schmidt is set to become an unrestricted free agent next summer.

“In my 30 years of working in NHL circles Nate Schmidt is one of the most honest caring individuals I have ever worked with,” Keator wrote in a statement on social media. “He is full of character caring most about faith, family and team. He would never risk his principles by taking performance enhancing drugs. There was no intentional use of a banned substance which is backed up scientifically. He is innocent and this is a wrong decision.”

The suspension suddenly leaves the Knights thin on the blueline entering training camp.

Restricted free agent Shea Theodore remains unsigned, opening the door for youngsters like Jake Bischoff, Griffin Reinhart and Zach Whitecloud to compete for a spot on the opening-night roster. 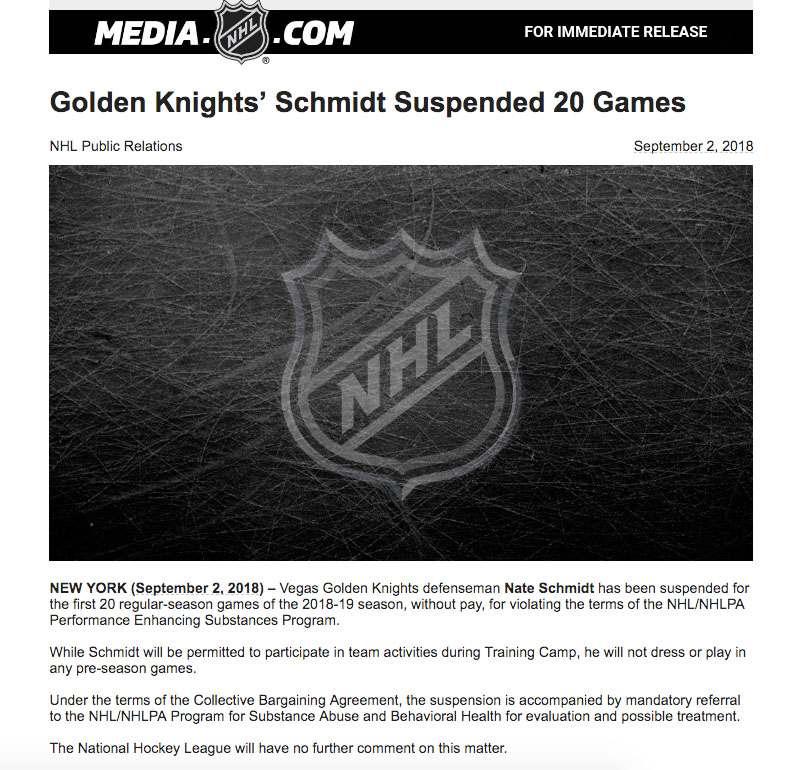