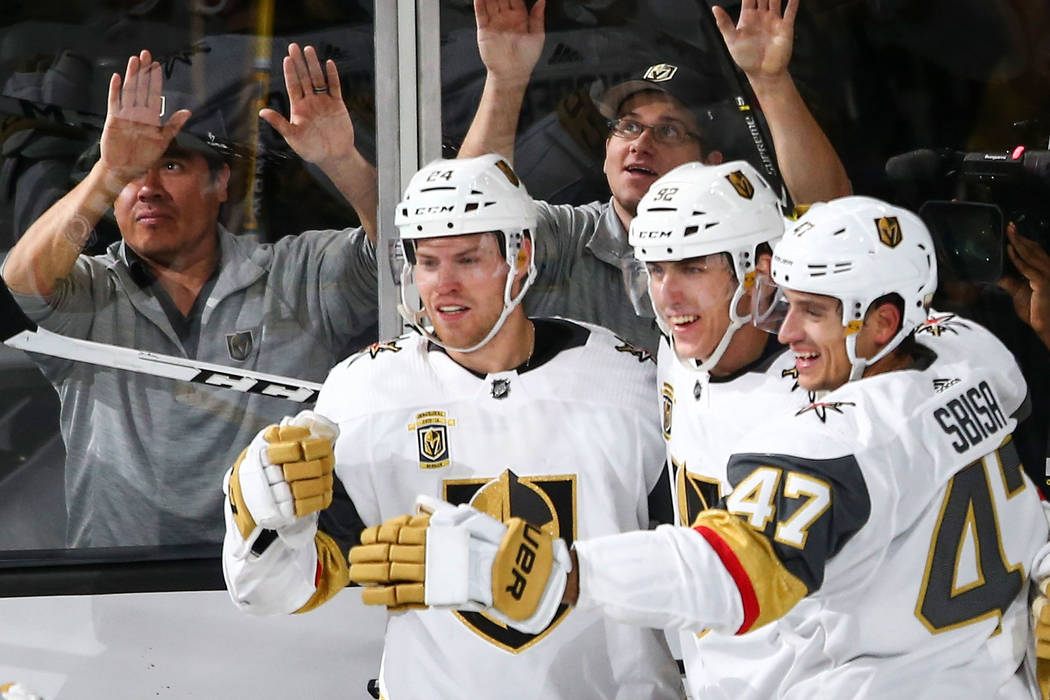 The epidemic started spreading last month and already has a nickname.

Whether it’s the Golden Knights creating all the headaches or the enticement of a late night on the Strip, something has caused opponents to feel under the weather at T-Mobile Arena. 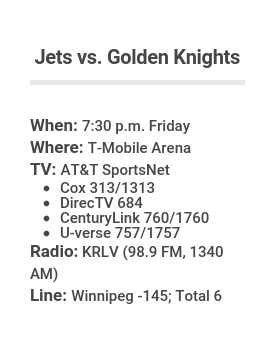 “I think their team’s better than people thought it would be,” Jets coach Paul Maurice said, explaining the Knights’ home-ice advantage. “I think that’s the key piece to all of this.”

The symptoms of the “Vegas Flu” showed up last month when the Knights played seven of their first nine games on home ice and went 6-1, outscoring opponents 30-17.

The Chicago Blackhawks arrived in Las Vegas two days prior to their Oct. 24 game against the Knights, and captain Jonathan Toews told media that the city would not be a distraction.

“When it’s time to go to work, we have to be professionals about it and be ready for that game,” Toews said at the time.

The Blackhawks scored 3:33 into the first period, but the Knights responded with two quick goals and went on to a 4-2 victory over the Stanley Cup contenders.

“It’s an amazing experience down at T-Mobile Arena,” Knights general manager George McPhee said Thursday. “As I’ve told a lot of people, it’s like putting Madison Square Garden in Times Square. There’s this buzz around the building, and then you get into the building and it’s a different kind of buzz.”

Colorado flew to Las Vegas the night before its 3 p.m. game on Oct. 27, and Avalanche coach Jared Bednar called it a “business trip.” The Knights erupted for four goals in the second period and cruised to a 7-0 victory to conclude the seven-game homestand.

The Sabres and Blues also arrived in Las Vegas the day before playing the Knights and both teams lost in overtime.

“The bright lights, the allure, the everything,” Knights defenseman Nate Schmidt said. “Whether it’s just staying up an extra half hour later because you’re playing cards. Or you go to a show and you’re up an hour after, whatever it may be. I just think it throws you off your schedule a little bit.”

Knights defenseman Luca Sbisa played the past three seasons with Vancouver, where players have been known to come down with the “Roxy Flu,” which is named after a popular downtown club.

But Sbisa added that spending a night out also can bring teammates closer together.

“It can go either way,” Sbisa said. “I don’t know what the other teams get up to when they’re in this city. The city has its fair share of distractions and all that, but at the same time, it’s nothing we really worry about. It’s up to the visiting team to do whatever is best to get prepared for the game.”

The Jets beat Dallas 4-1 on Monday, their seventh game in a 12-day stretch, but should be well rested for Friday’s game. The team arrived in Las Vegas early Tuesday and had the day off before practicing Wednesday and Thursday.

Winnipeg has earned at least a point in eight straight games and is 4-1-2 away from home.

The Knights went 1-4-1 on their recent road trip, and Friday’s game is a brief stop at home before they head back out on the road next week for games in Edmonton and Vancouver.

“It’s a measuring stick for where we’re at,” Schmidt said. “(Winnipeg is) playing really well, probably one of the hottest teams in the National Hockey League right now. And you have a chance to get back and play at home, and I think that that’s got to be our biggest thing this year. We have to win at home.”

1. Matching up. Knights defensemen Luca Sbisa and Nate Schmidt usually face the opposition’s top line, and the pair will have a tough task against the Jets’ Blake Wheeler, Mark Scheifele and Kyle Connor. Wheeler has 21 points, tied for third in the league, and recorded four assists in Monday’s 4-1 win at Dallas.

2. Blue line watch. Shea Theodore saw his ice time cut in the final two periods against Toronto, and the 22-year-old defenseman was a scratch for the Knights’ last game at Montreal. Will he return to the lineup against Winnipeg, or will Gerard Gallant stick with Brad Hunt?

3. Special teams. The Knights rank 15th in the NHL in penalty killing (81.3 percent) but allowed one power-play goal in the past four games. That unit will be tested against Winnipeg, which is fourth in the league on the power play at 23.9 percent. The Jets have scored on six of their past nine man-advantages.