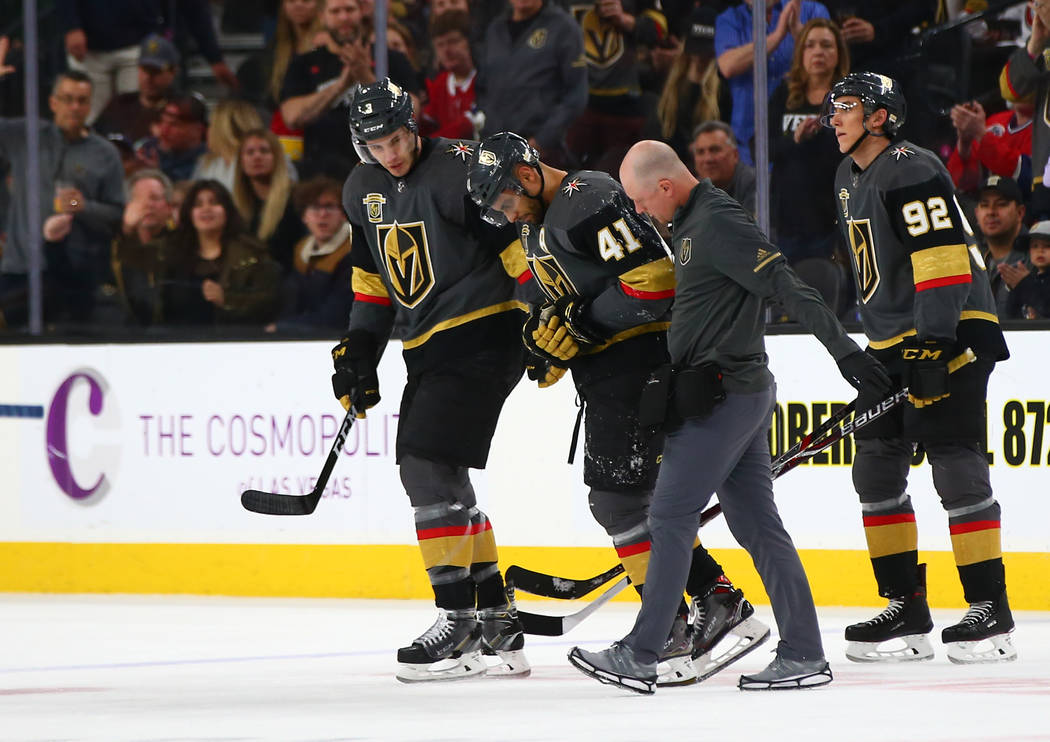 Golden Knights left wing Pierre-Edouard Bellemare (41) is escorted off the ice after a hard crash during the first period of Sunday's win over the Montreal Canadiens at T-Mobile Arena. (Chase Stevens/Las Vegas Review-Journal) @csstevensphoto

As effective as the Golden Knights’ fourth line has been this season, keeping it healthy has been a challenge.

Now it’s center Pierre-Edouard Bellemare who is out, after the team placed him on IR Monday. He’ll miss at least a week.

Bellemare landed awkwardly into the sideboards near center ice in the first period of Sunday’s 6-3 win over Montreal. After he made two attempts to remain in the game, he was pulled in the second period. He was seen holding his left wrist or hand when he initially came off, and the team is calling it an upper-body injury.

“He’s an important player for us,” coach Gerard Gallant said of Bellemare, who has played in 55 games and has five goals and eight assists. “His penalty killing and his defensive play are the biggest things he brings.”

“I’m going to try and play with energy and keep things simple,” said Matteau, who has played five games and has one assist with the Knights this season after being recalled for the first time Nov. 28. “Same formula as last time.”

In addition to Matteau, the Knights recalled forward Tomas Hyka from the Wolves. Hyka was with the team in the preseason, then was reassigned to Chicago before making his NHL debut Monday.

Hyka took James Neal’s place in the lineup, as Neal has been dealing with flu symptoms for the past few days.