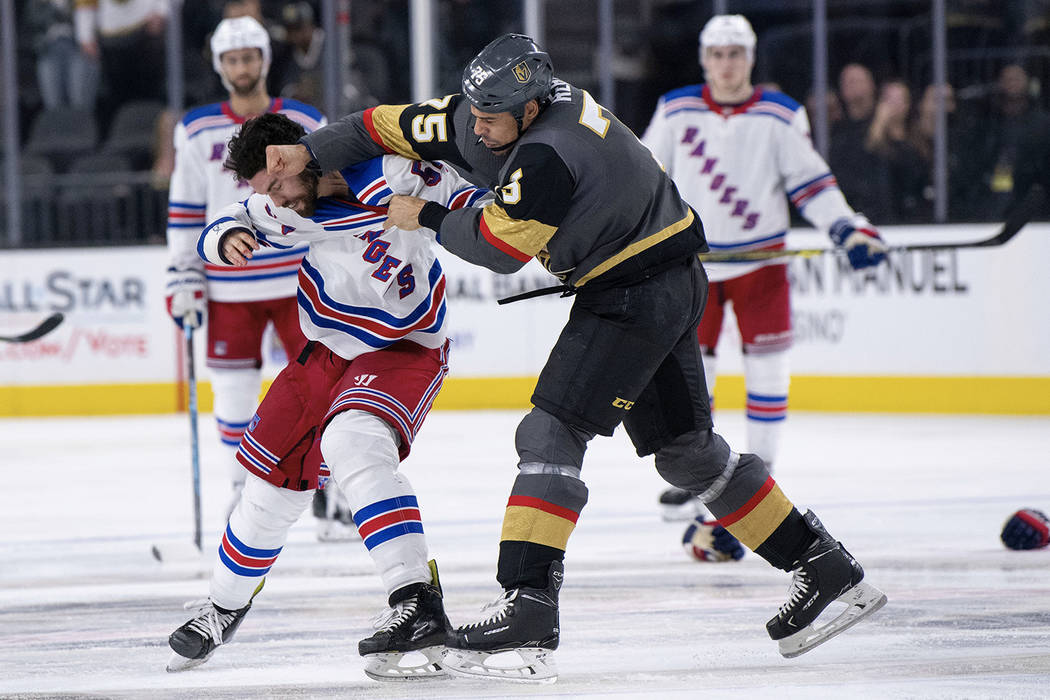 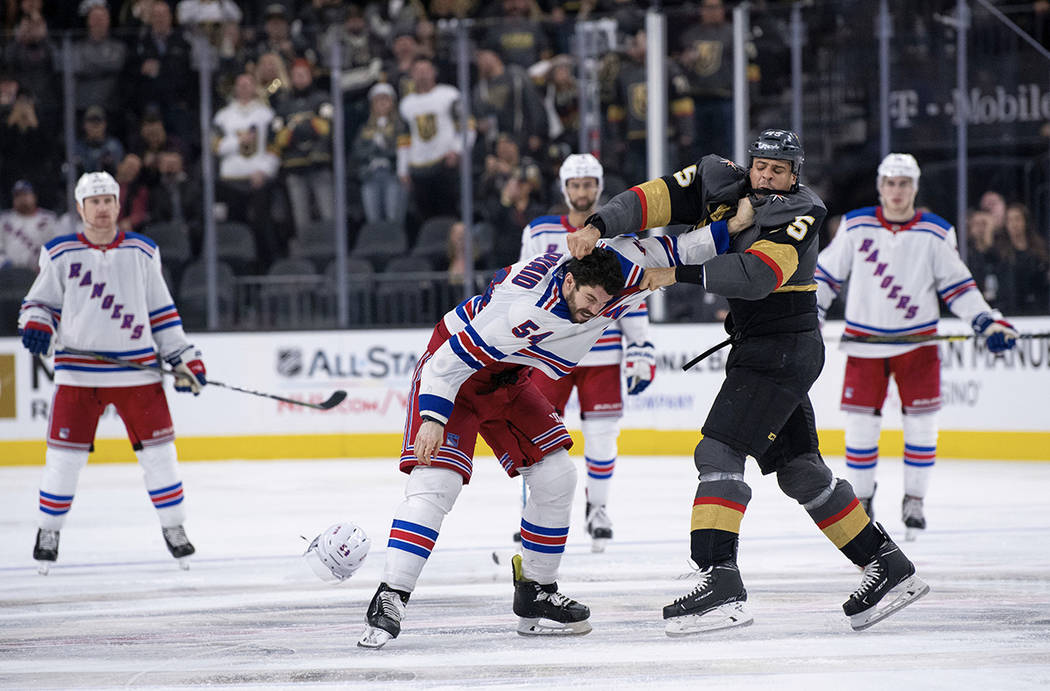 Golden Knights forward Ryan Reaves lamented earlier this week the fact he had yet to engage in a fight at T-Mobile Arena.

Adam McQuaid helped change that when he dropped the gloves with Reaves during Tuesday night’s game against the Rangers.

“That was fun,” Reaves said of his one-sided beating of McQuaid near center ice. “I was just saying one day I’m going to regret never having a fight there and then two days later, there it was. I definitely fed off the energy in the crowd, that’s for sure.”

The confrontation was building from the start. Max Pacioretty got in a big shot on Anthony DeAngelo in the first period, and the Rangers went after Pacioretty a couple times, including a big hit late in the second period.

“They were a little upset because DeAngelo got hurt a little bit and that could have been a boarding penalty, then we thought it could have been a penalty when McQuaid hit (Pacioretty), but the refs called a good game tonight in my opinion,” Knights coach Gerard Gallant said. “Nobody is going to come in on our team and try to intimidate us. Especially going after our top players, guys are going to stand up for each other.”

It was the 65th fight of Reaves’ NHL career and third of the season, according to hockeyfights.com.

“I think he probably knew I was looking for him so we just kind of met right there at center ice,” Reaves said. “Those are always fun. He’s a tough kid, and I think he knew he ran (Pacioretty) a little early there. There’s not a lot of guys who will answer the bell like that, so good on him.”

Reaves said McQuaid actually got a good grip early in the scrap, so he allowed McQuaid to throw while he readjusted his hands. Once he realized the punches were coming up short, Reaves found his range before dropping McQuaid to the ice with several big right hands.

“I thought it was a good one,” Reaves said. “I can’t complain. It got real loud in there real quick and it was good to have the fans behind me. That was only my third of the year. Back in the day, I was getting like 14 a year. I don’t think I’m going to get double-digits this year, so they’re always fun. This will be the first time I’ll have more goals than fights. It’s nice. A little easier on the hands, that’s for sure.”

The Knights announced Wednesday they will host three “Love Your Melon Nights,” beginning on Feb. 20 against the Boston Bruins.

Love Your Melon is an apparel brand aimed at providing hats to children battling cancer as well as supporting organizations fighting pediatric cancer.

Half of the net profit from salesare donated to the brand’s nonprofit partners.

Fans purchasing tickets to the three games, which also include March 21 against Winnipeg and March 29 against Minnesota, through a link on the team’s website will receive a Love Your Melon beanie with their ticket.

Forward Valentin Zykov has yet to play a game for the Knights since he was acquired off waivers from Edmonton on Dec. 29.

He has played at T-Mobile Arena as a member of the Carolina Hurricanes.

“They’ve done a great job with the (atmosphere) there,” he said in meeting with reporters for the first time on Wednesday. “I see all the guys getting very excited to play home games and I understand why.”

The 2013 second-round pick of the Kings is just adjusting to his new home while he awaits his opportunity.

“I’ve only been here a couple days, but so far, so good,” the 23-year-old Russian said. “It’s a very entertaining city. For now, I’m just enjoying the weather.”