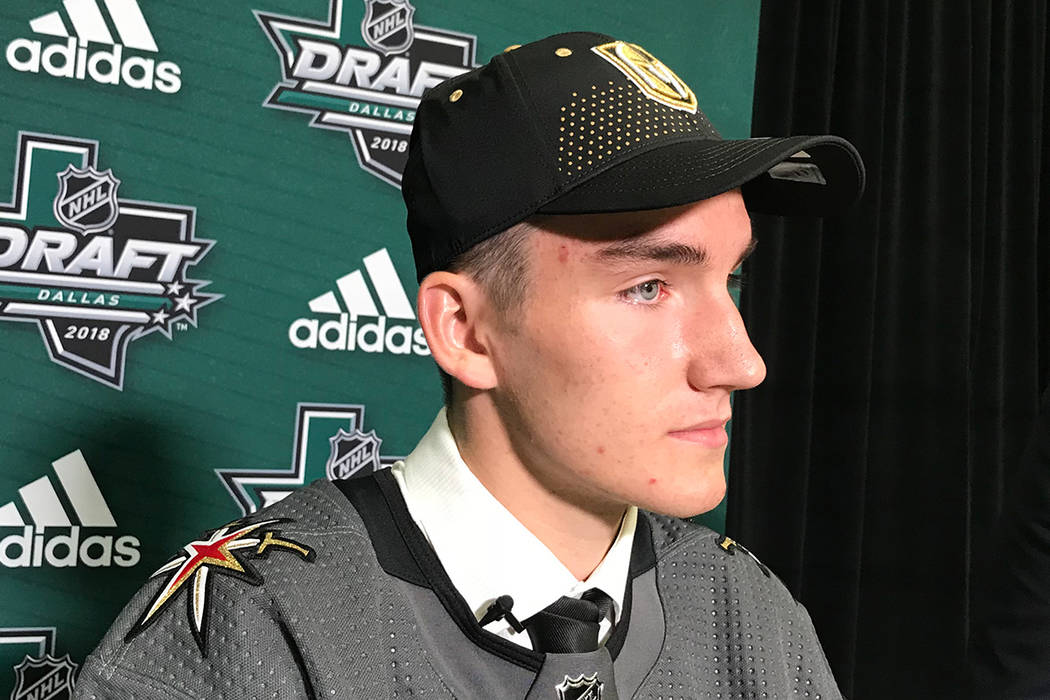 Ivan Morozov after being selected by the Golden Knights in the second round of the NHL Draft Saturday in Dallas. (Steve Carp/Las Vegas Review-Journal)

DALLAS — When it comes to drafting young players, patience remains the watchword for the Golden Knights.

The Western Conference champions came to American Airlines Center on Friday without a first-round draft pick. They left Saturday with eight new players, none of whom are expected to play with the team anytime soon.

“It worked out the way we hoped,” Knights general manager George McPhee said. “You prepare as well as you can for every draft. Some go your way. Some don’t. We feel this one went our way.”

The Knights drafted four defensemen, two centers, a forward and a goaltender with their eight picks Saturday. They made one deal — acquiring a seventh-round pick after trading their 2019 seventh-round choice to Pittsburgh.

Of the eight, half are expected to play college hockey in the fall. Their top selection, center Ivan Morozov, who was taken in the second round at No. 61 overall, probably will remain in Russia, where he’s expected to play for SKA St. Petersburg in the Kontinental Hockey League.

“Playing at a high level against the best players will help give me more experience,” Morozov said through an interpreter. “I’m a playmaker. I like to look for my teammates.”

Bob Lowes, the Knights’ assistant director of player personnel, said Morozov caught the team’s eye in international tournaments. And after he played well in the Under-18 world championships, he stayed on the Knights’ radar.

“We actually had him rated at No. 30, where we would have picked had we kept our first-round pick,” Lowes said. “But he was still there for us at 61 so we were thrilled to be able to take him.”

With their two fourth-round picks, the Knights took Slava Demin, a defenseman from Southern California who is attending the University of Denver. They also selected Paul Cotter, a center from the Lincoln Stars of the United States Hockey League; he will attend Western Michigan this fall.

“I watched them, and I love the way they play,” Demin said of the Knights. “They play extremely fast and super unselfish. It was really cool to be picked by Vegas.”

Forward Brandon Kruse was taken in the fifth round and will be a sophomore at Bowling Green. Defenseman Peter Diliberatore, a sixth-round pick who played prep school hockey in Connecticut, is headed to Qunnipiac.

Lowes said he’s fine with both Kruse and Diliberatore playing at the college level.

“In North America, there’s different avenues to go,” he said. “Sometimes, going to school is the best place for a player to develop.”

The two junior defensemen selected — Connor Corcoran of Windsor and Xavier Bouchard of Baie-Comeau — are expected to return to their teams in the fall.

“I’m just a simple player who tries to do the right thing and not make too many mistakes,” Corcoran said. “I always compete, and I want to be someone who the coach can count on in the final minutes of a game.”

Bouchard said he wasn’t worried about being taken late in the draft.

“I’m really optimistic about my chances,” he said of one day playing in the NHL. “I’m going to work hard, get better and another year (at Baie-Comeau) will be great for my development.”

Six draft picks are expected to participate at the Knights’ development camp beginning Tuesday at City National Arena. McPhee said Morozov and Demin won’t be there.

If there were any surprises for the Knights, it was the trade late in the draft that saw them select a goalie. Jordan Kooy, who was the backup for the London Knights, was taken in the final round with the 208th overall pick.

“Dave Prior was really impressed with him,” Lowes said of the Knights’ goaltending coach. “We trust Dave, and when Dave wants a goalie, we get him a goalie.”