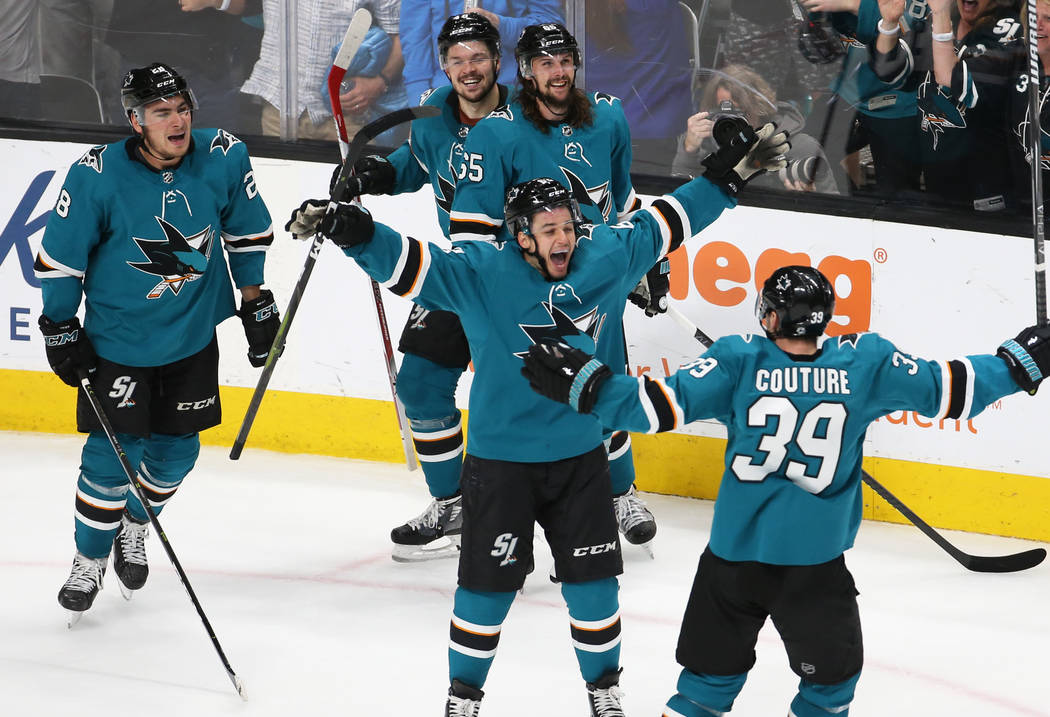 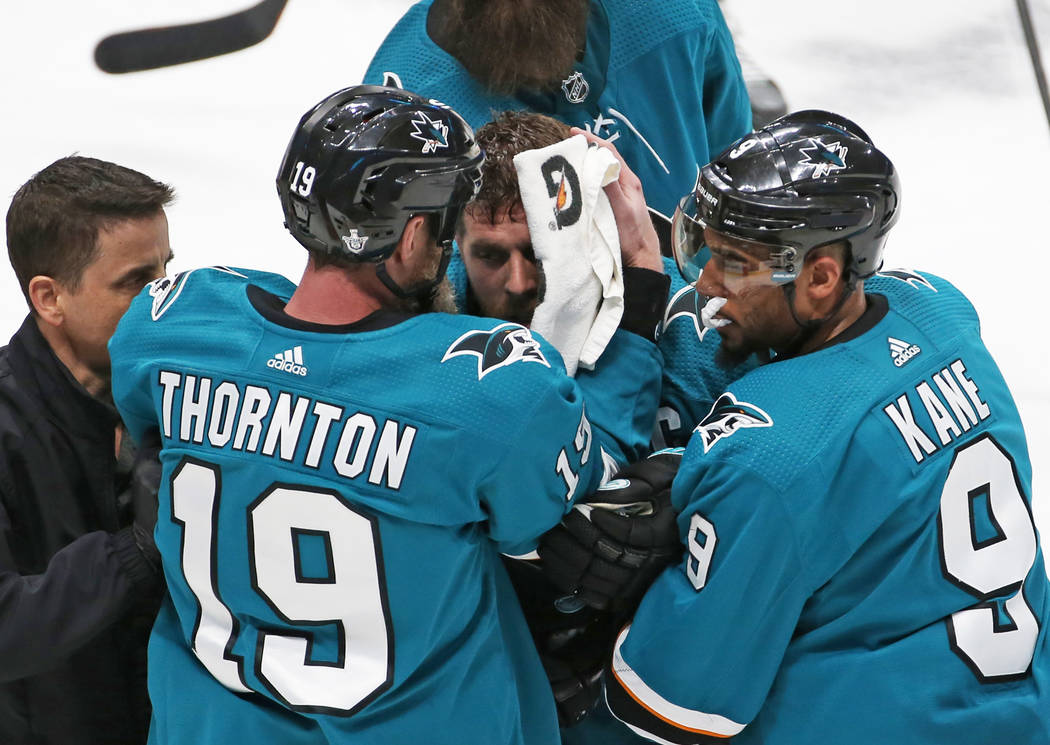 Sharks center Joe Pavelski, middle, is helped off the ice by Sharks left wing Evander Kane and Sharks center Joe Thornton after getting hit by Knights center Cody Eakin (out of frame) in the third period of Game 7 of the Western Conference quarterfinal series on Tuesday, April 23, 2019, at SAP Center, in San Jose, Calif. (Benjamin Hager/Las Vegas Review-Journal) @BenjaminHphoto 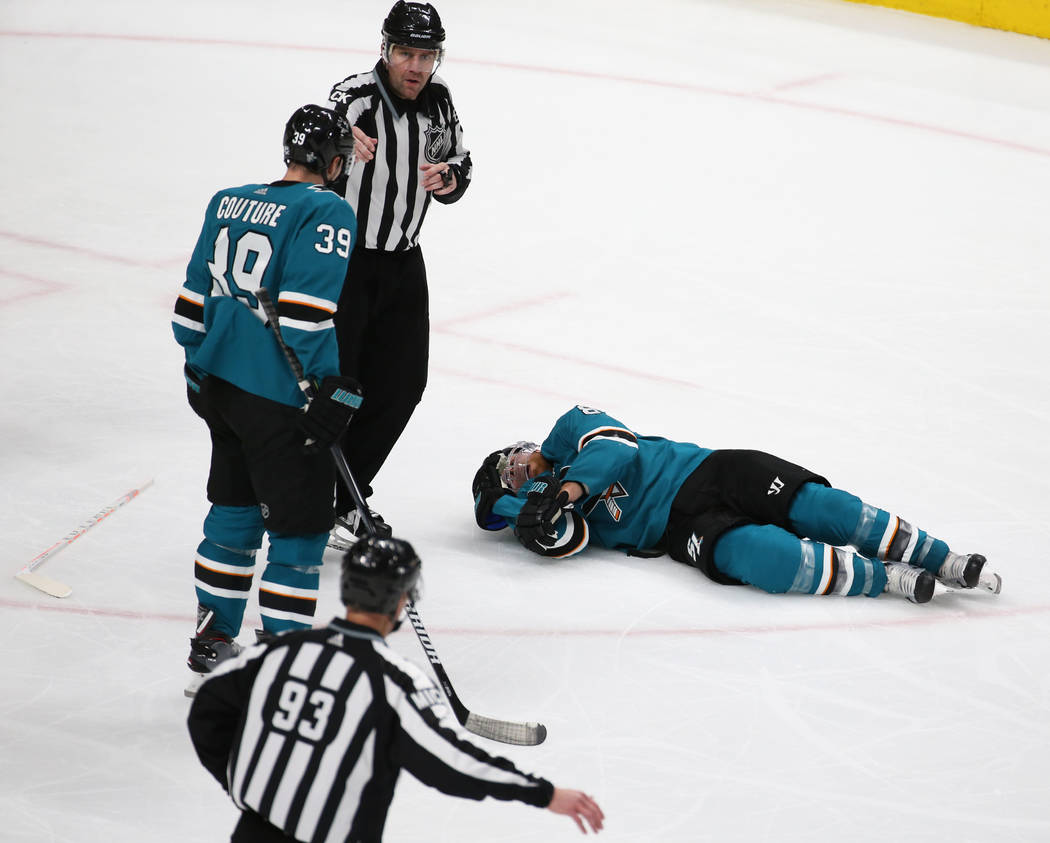 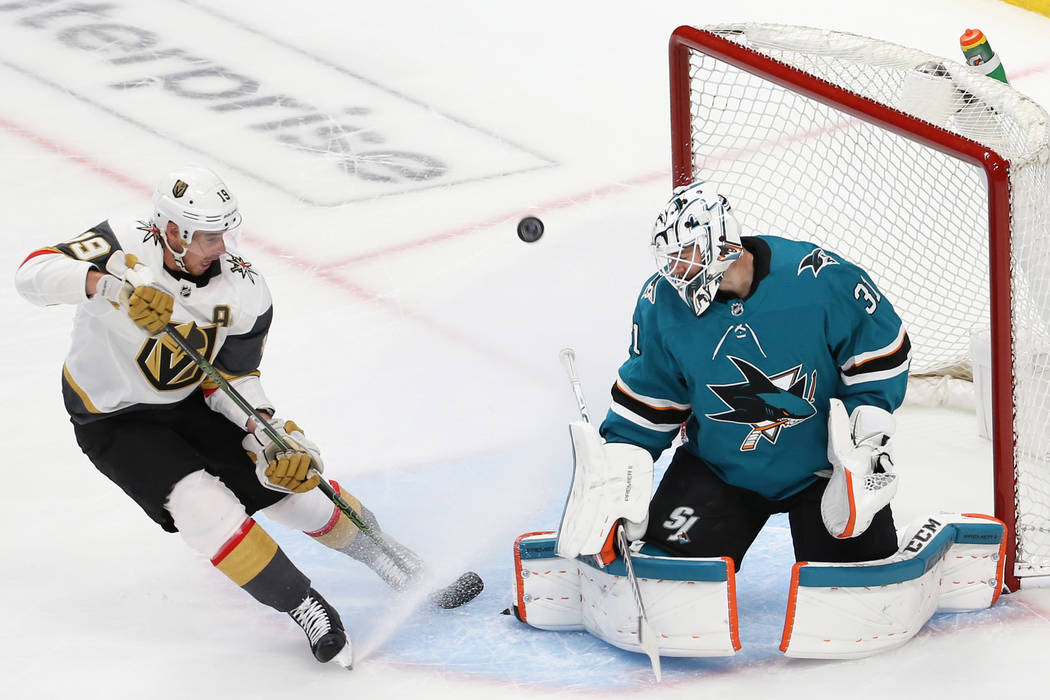 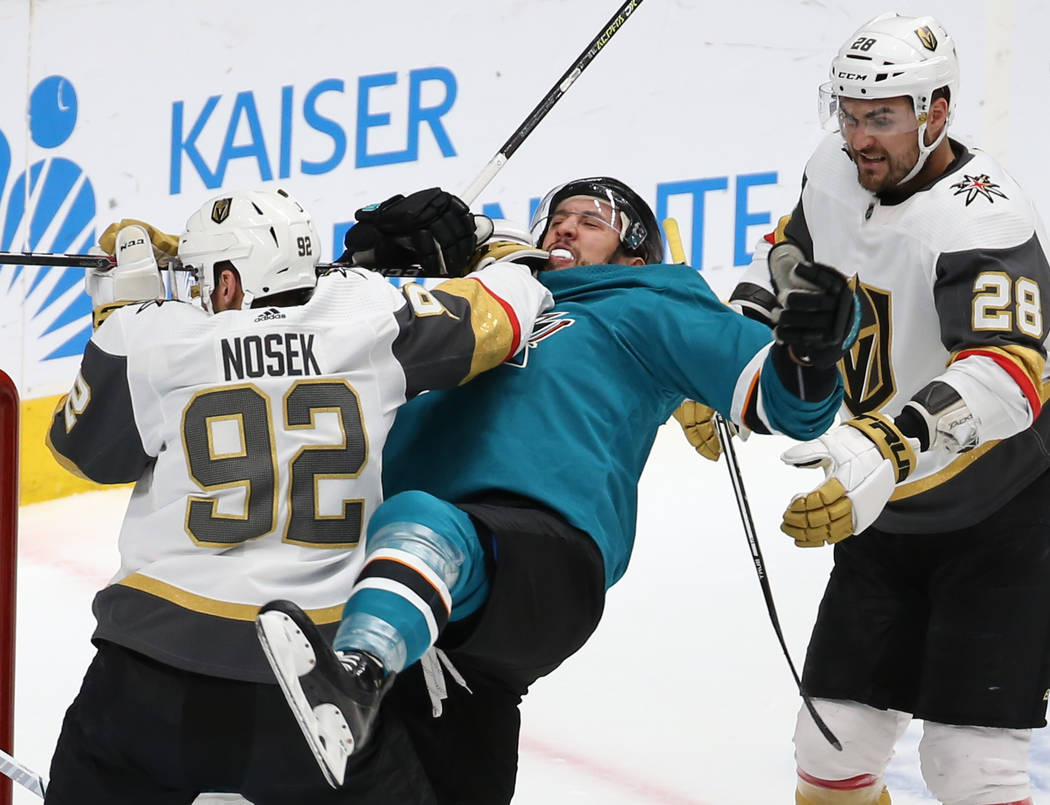 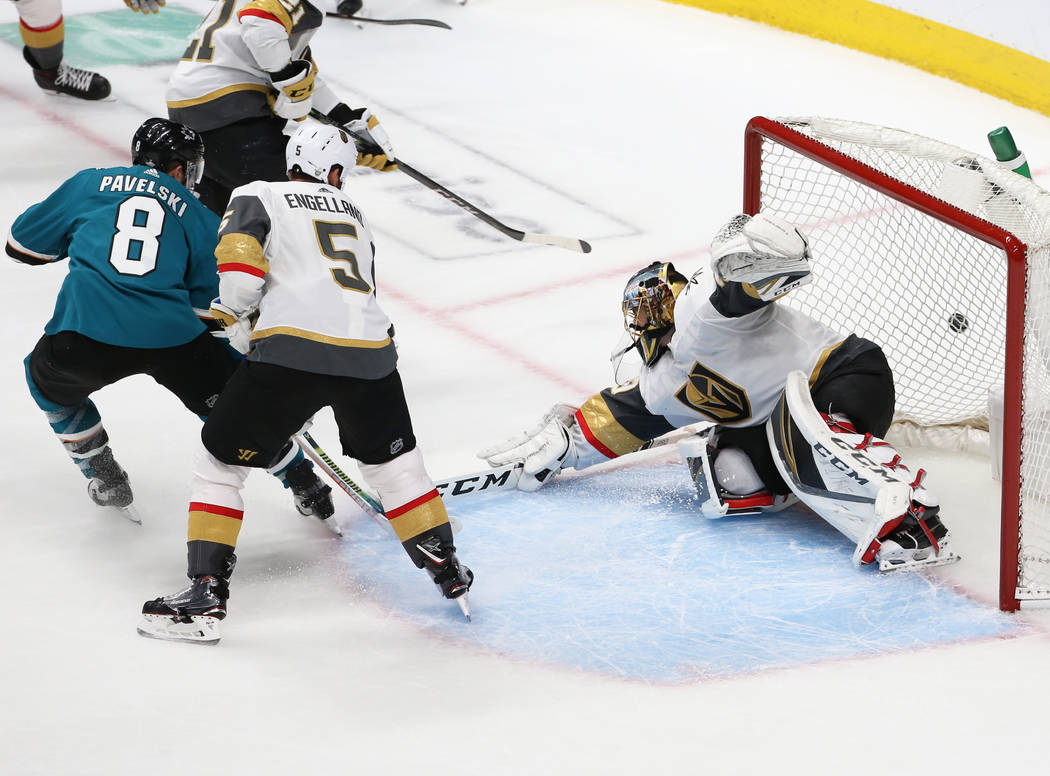 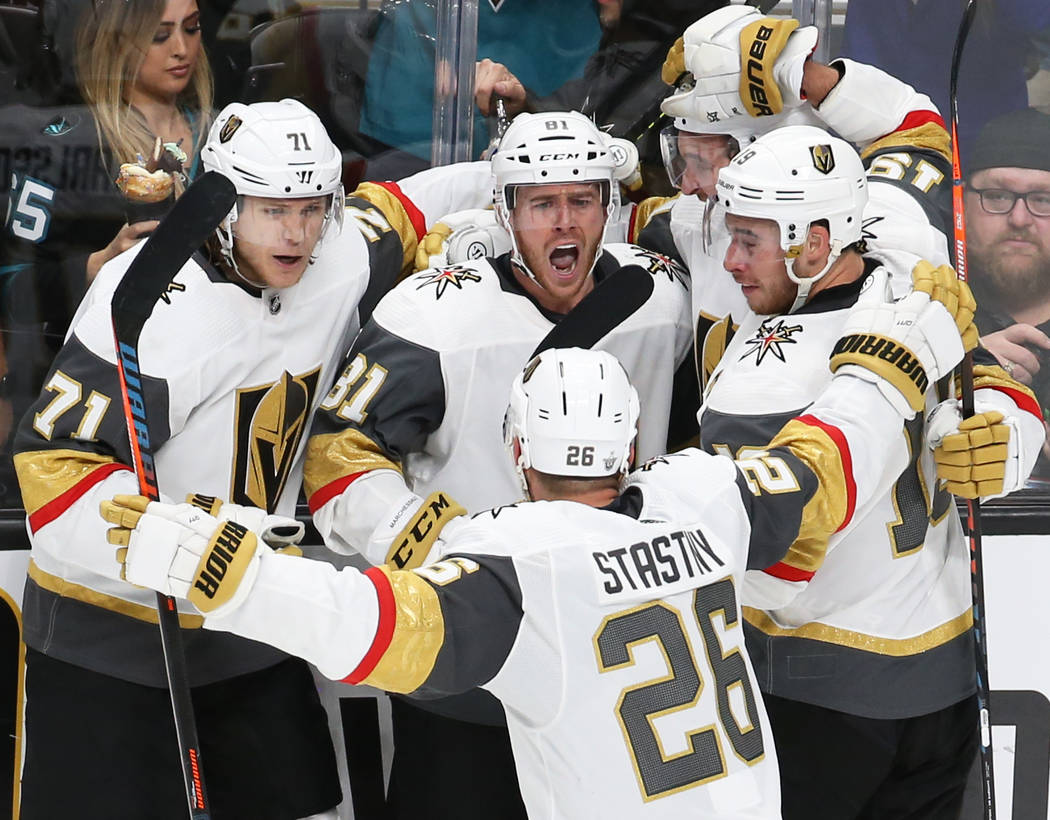 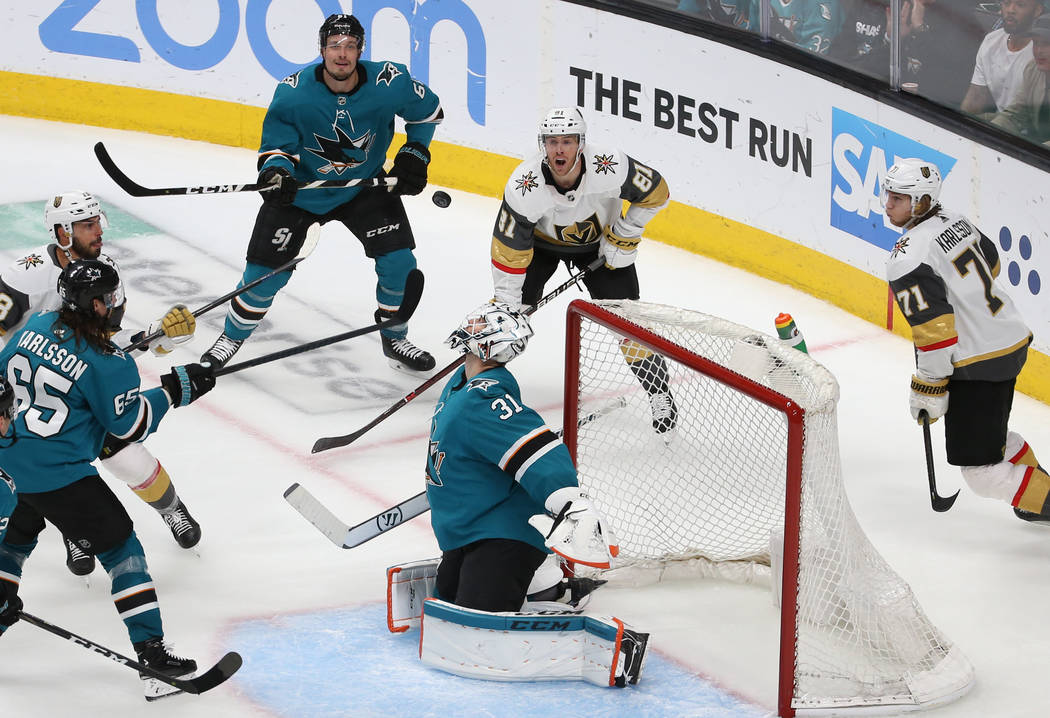 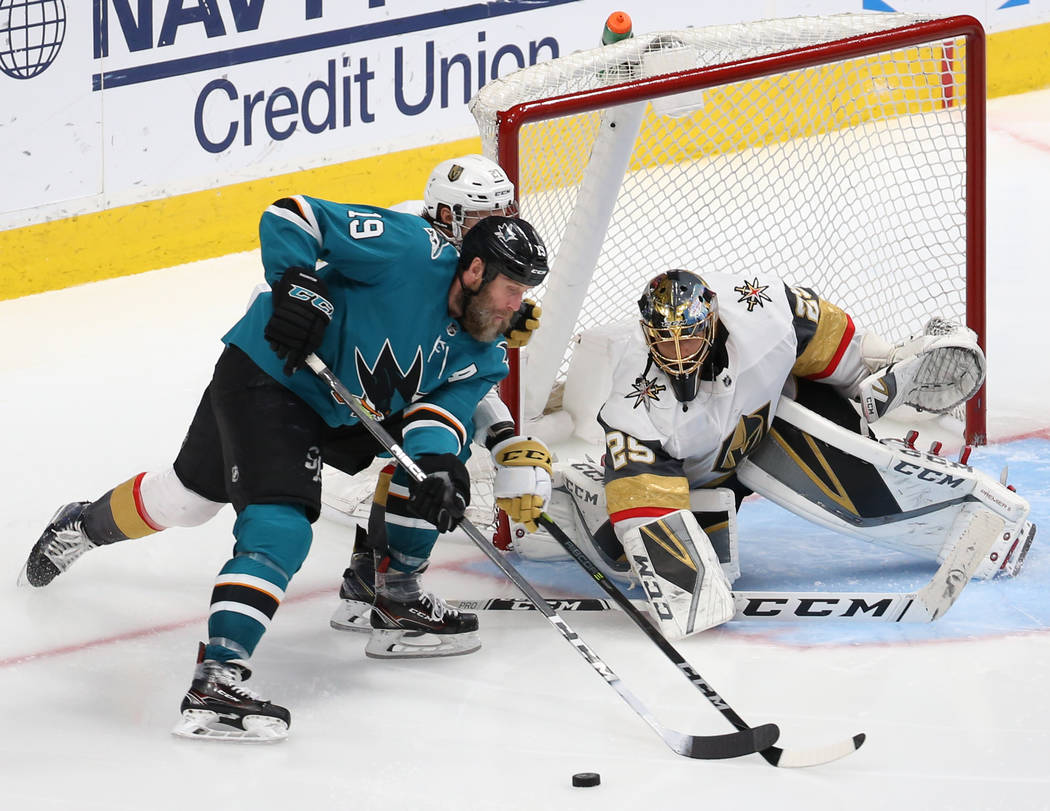 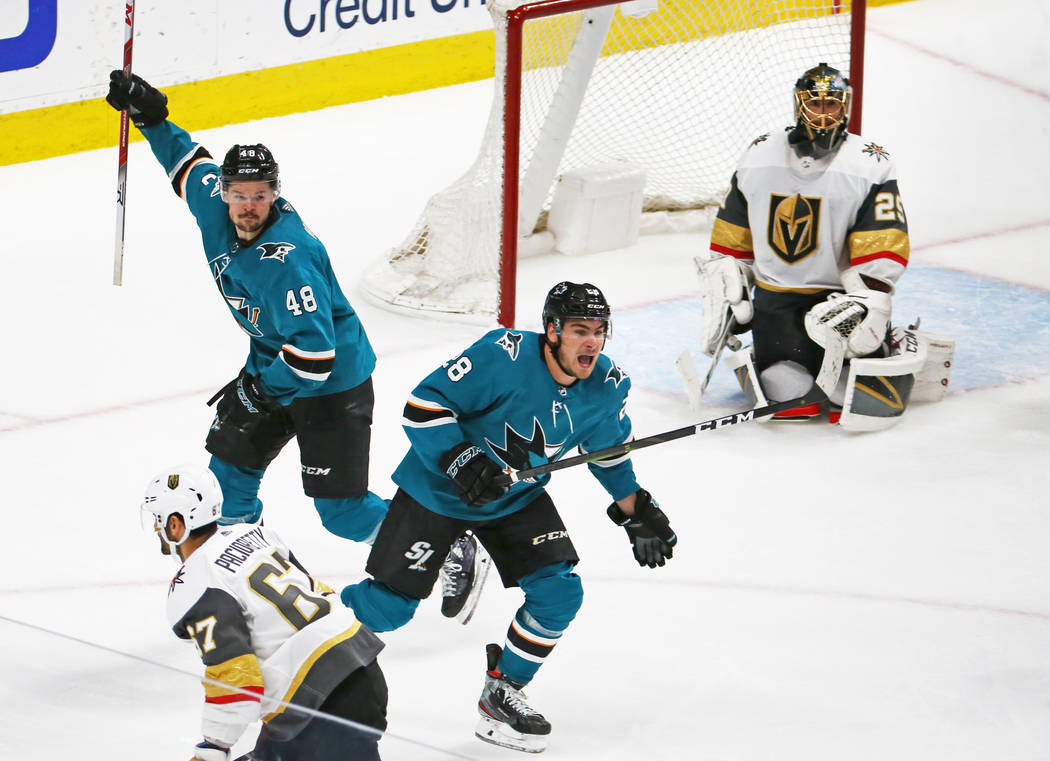 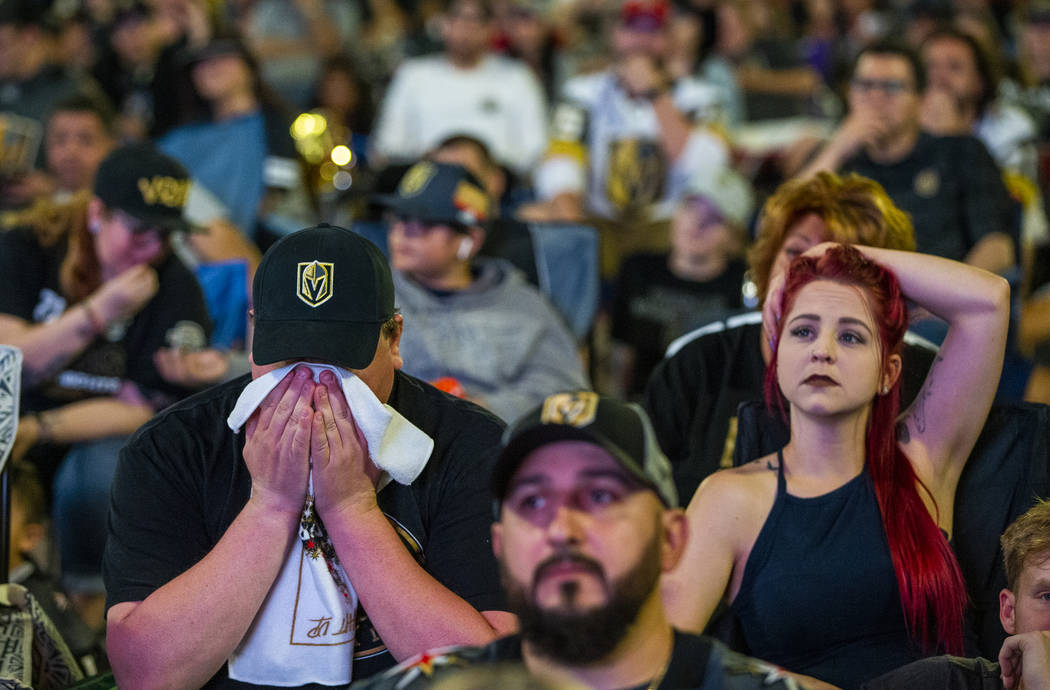 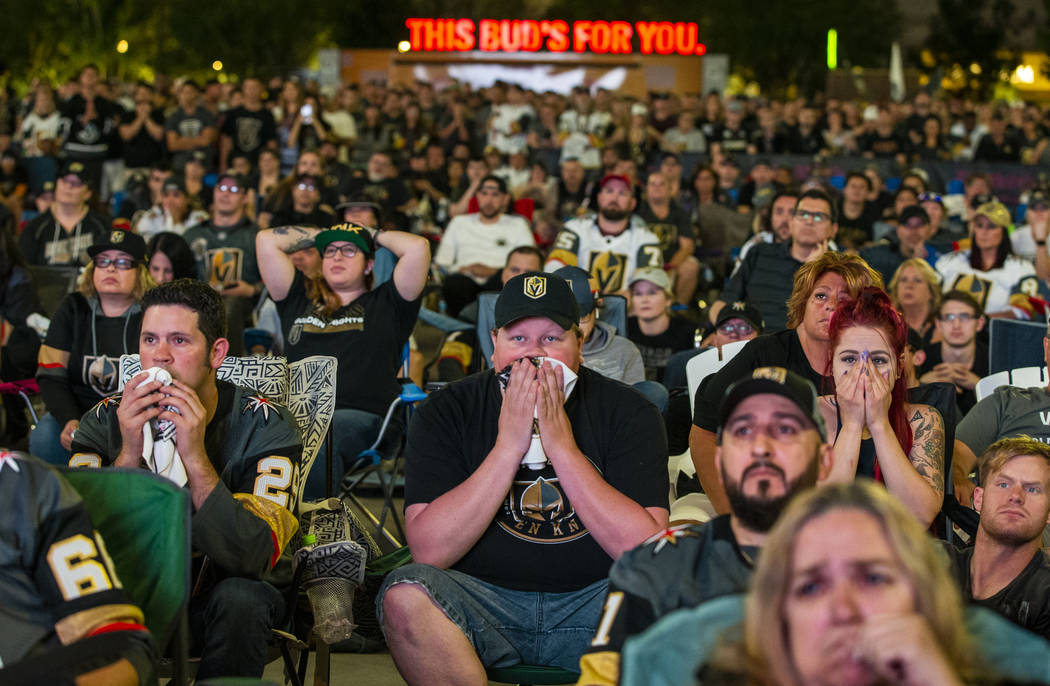 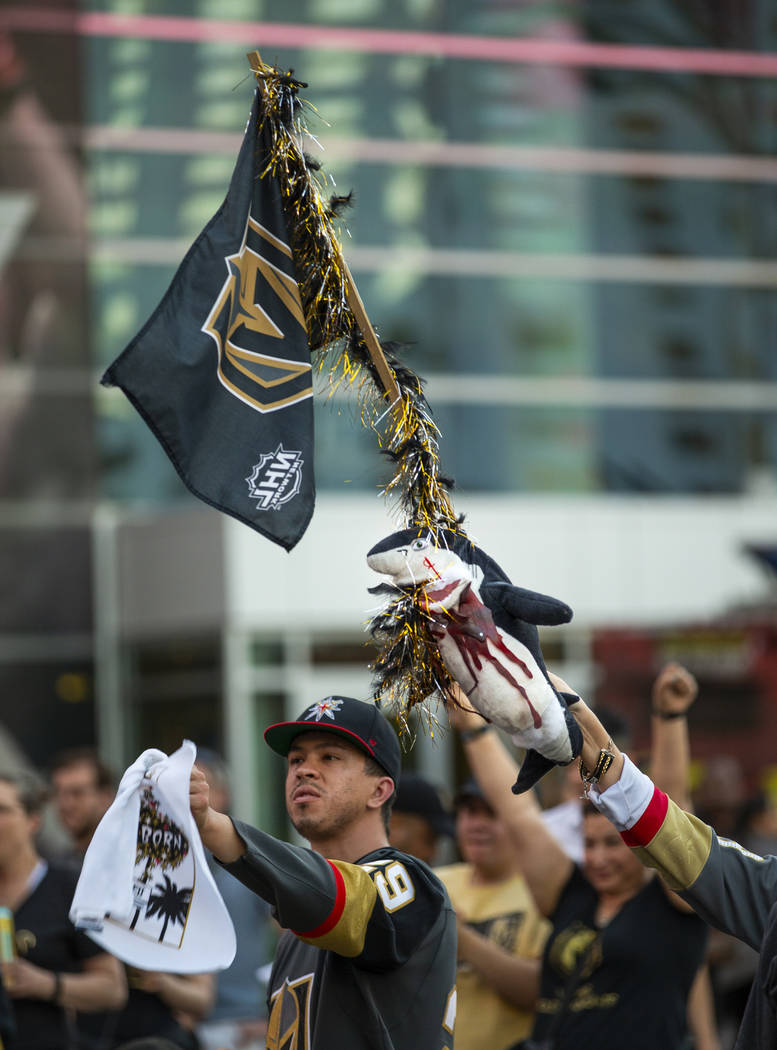 A Golden Knights fan flies a flag with bloody shark attached while celebrating a goal with others during the first period of Game 7 of an NHL Western Conference quarterfinal series at T-Mobile Arena in Las Vegas, Tuesday, April 23, 2019. (L.E. Baskow/Las Vegas Review-Journal) @Left_Eye_Images 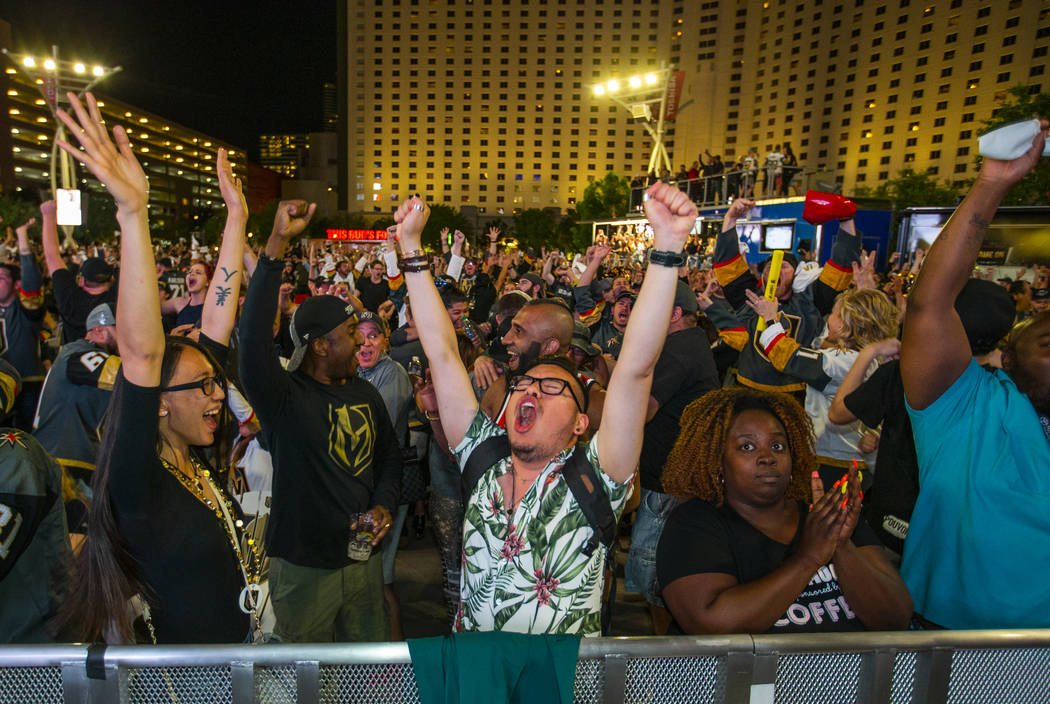 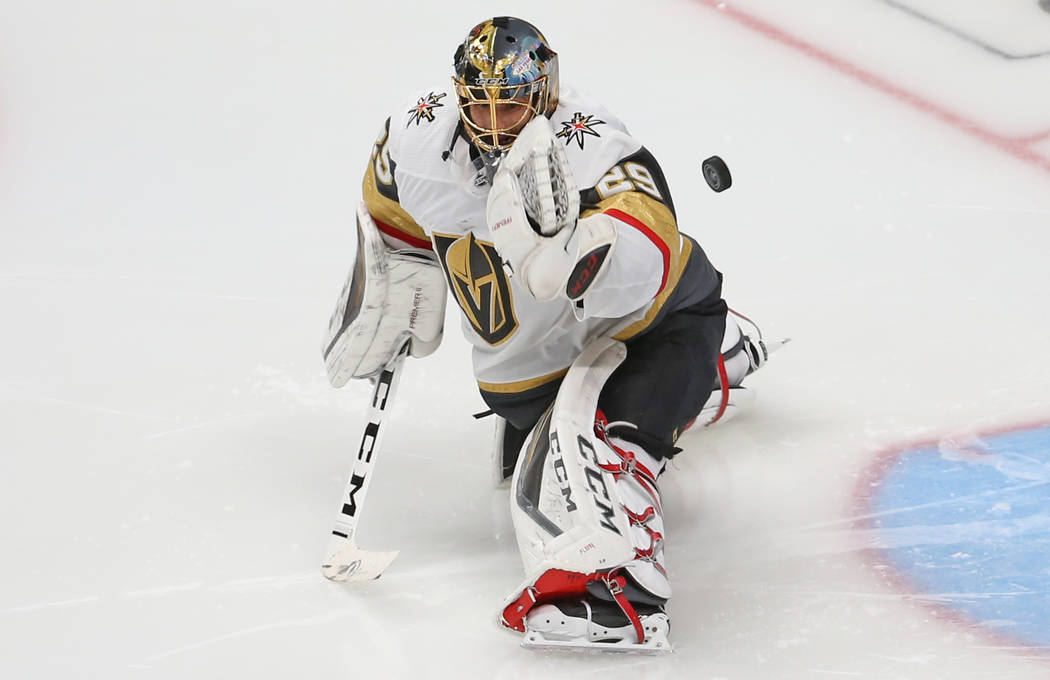 Golden Knights goaltender Marc-Andre Fleury (29) makes a save in the second period during Game 7 of the NHL Western Conference quarterfinals against the San Jose Sharks on Tuesday, April 23, 2019, at SAP Center, in San Jose, Calif. (Benjamin Hager/Las Vegas Review-Journal) @BenjaminHphoto 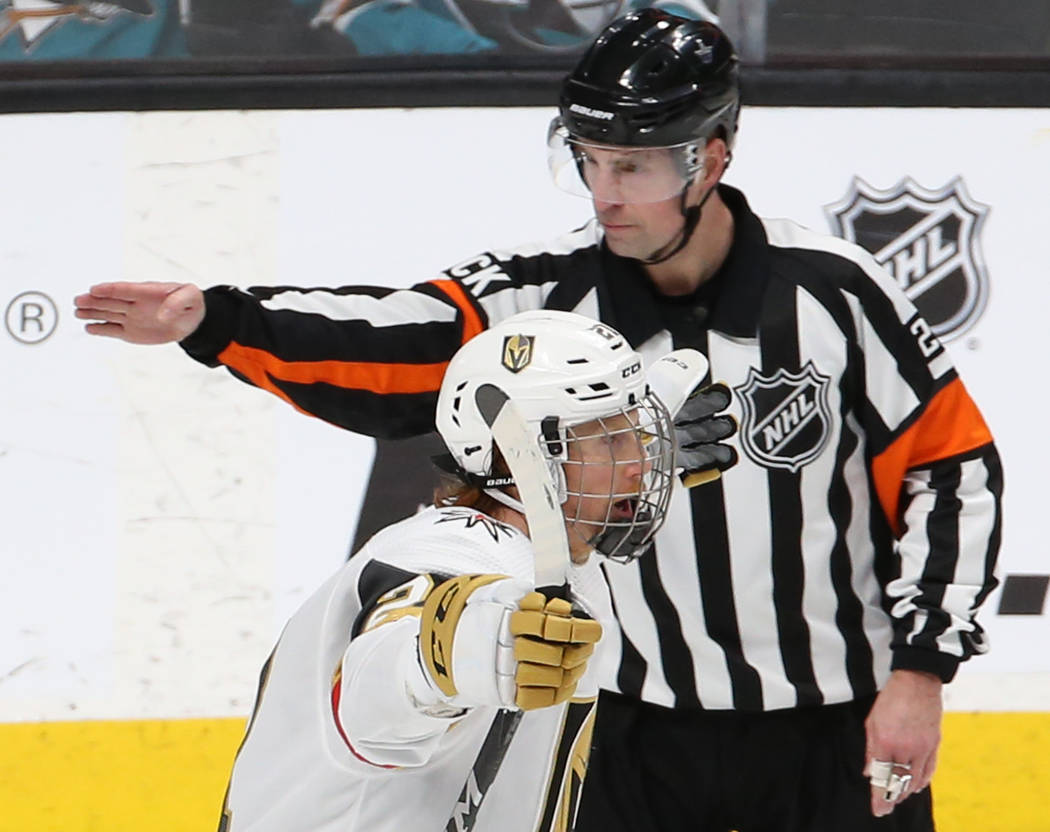 SAN JOSE, Calif. — When hockey historians look back at the soon-to-be legendary first-round playoff series between the Golden Knights and Sharks, several moments will stand out.

The trash-talking between players and coaches. The bold prediction by San Jose’s Tomas Hertl after Game 5. And the dramatic ending filled with controversy.

Barclay Goodrow etched his name in San Jose Sharks lore, scoring with 1:41 remaining in overtime Tuesday to send the Knights to a crushing 5-4 Game 7 loss before an announced sellout of 17,562 at SAP Center.

The Sharks, who overcame a 3-1 deficit in the best-of-seven series, advance to play Colorado in the Western Conference semifinals.

But the first Game 7 in Knights’ franchise history will forever be remembered for the momentum-turning major penalty called on Cody Eakin during the third period.

“I thought we came into this building and played a good game, a solid game,” Knights goaltender Marc-Andre Fleury said. “Did the right things, and this five-minute (penalty) cost us the game, ultimately the series.”

San Jose overturned a 3-0 deficit with four goals in a span of 4:01 after Eakin was assessed a five-minute major and a game misconduct for cross-checking Joe Pavelski during an insane, hang-on-to-your-hats third period.

Jonathan Marchessault banged in a pass from Reilly Smith with 47 seconds remaining to tie the score 4-4, but Goodrow took a pass from Erik Karlsson and blew past defenseman Brayden McNabb before he rounded Fleury and slipped in a forehand.

“Last year in the Stanley Cup Finals was tough to lose,” coach Gerard Gallant said. “Tonight was tougher than that. It really was the way we lost that hockey game.”

William Karlsson, Eakin and Max Pacioretty also scored for the Knights, who appeared to be well on their way to the second round when Pacioretty’s wrist shot slipped past Sharks goaltender Martin Jones at 3:36 of the third period.

But on a faceoff with a little less than 11 minutes remaining, Eakin shoved San Jose’s Joe Pavelski in the chest with his stick, knocking the Sharks’ captain into Paul Stastny.

Pavelski then lost his balance and appeared to hit the side of his head on the ice after he fell awkwardly, but officials penalized Eakin.

“The referees called a cross-checking penalty for an infraction that caused a significant injury,” series supervisor Dan vanMassenhoven told a pool reporter. “In their judgment, the infraction and its result merited a major penalty.”

Logan Couture scored seven seconds later and added the tying goal with 7:07 left to play. Kevin Labanc put the Sharks on top 4-3 with 6:39 remaining when he wristed a shot past Fleury for his fourth point, matching the NHL record for points in a playoff period.

“Our (penalty kill) was awful, and that’s on me a big part of it,” defenseman Brayden McNabb said. “It’s tough to blow it, but we did a hell of a job getting back in it. It stinks.”

Eakin was involved in another key moment when he scored exactly midway through the second period to put the Knights on top, 2-0.

McNabb wristed a long shot toward the net, and Eakin redirected the puck past Jones for his second goal of the series.

Eakin’s stick initially appeared to be above the crossbar, but video replay confirmed it was below the crossbar when Eakin made contact with the puck.

The Knights didn’t get off to the start they wanted and were forced to kill off three penalties in the first period, including two in the opening 4:15.

That led to a lopsided advantage for San Jose in shot attempts (18-8) and forced Fleury to make 11 saves, highlighted by a diving stop with his arm during a scramble in the crease with a little more than five minutes gone.

But the Knights were able to snag the all-important first goal at 10:10 of the period on their third shot on goal.

Reilly Smith threw the puck toward the front of the net, where it hit Jonathan Marchessault’s leg and fell for William Karlsson at the top of the crease.

He poked the loose change past Jones for his second goal of the postseason and fifth in 13 career playoff games against the Sharks.