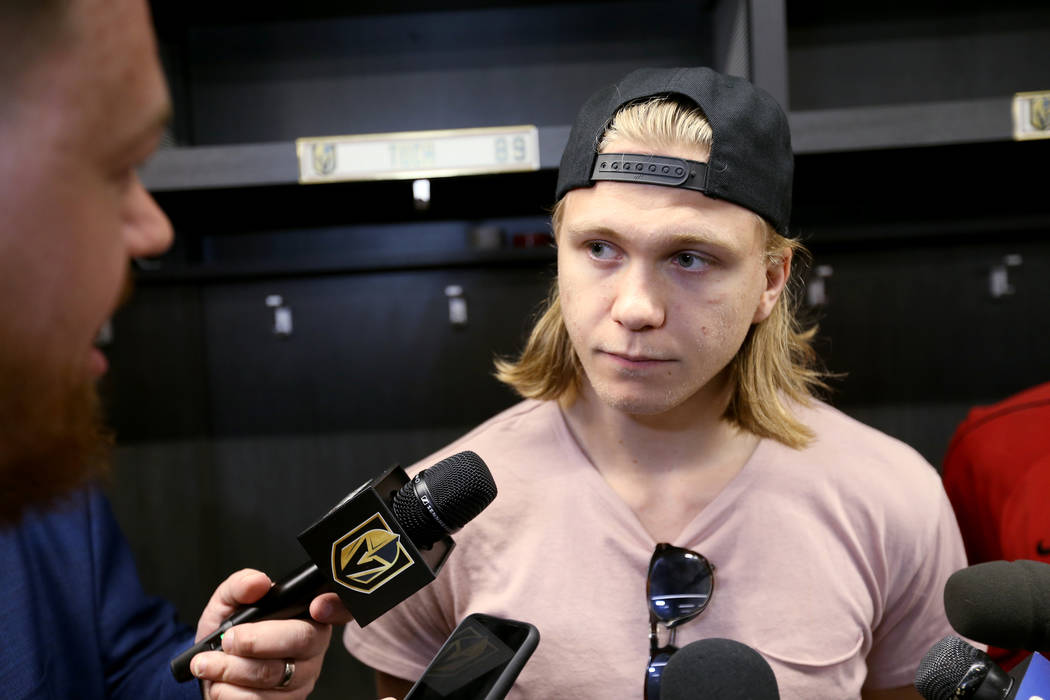 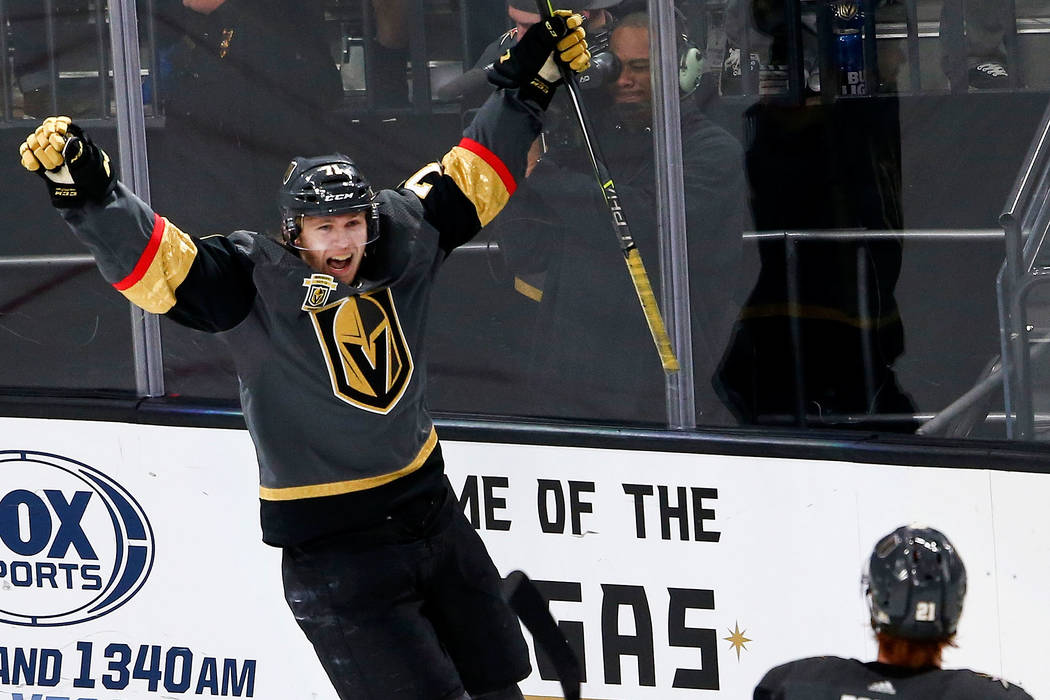 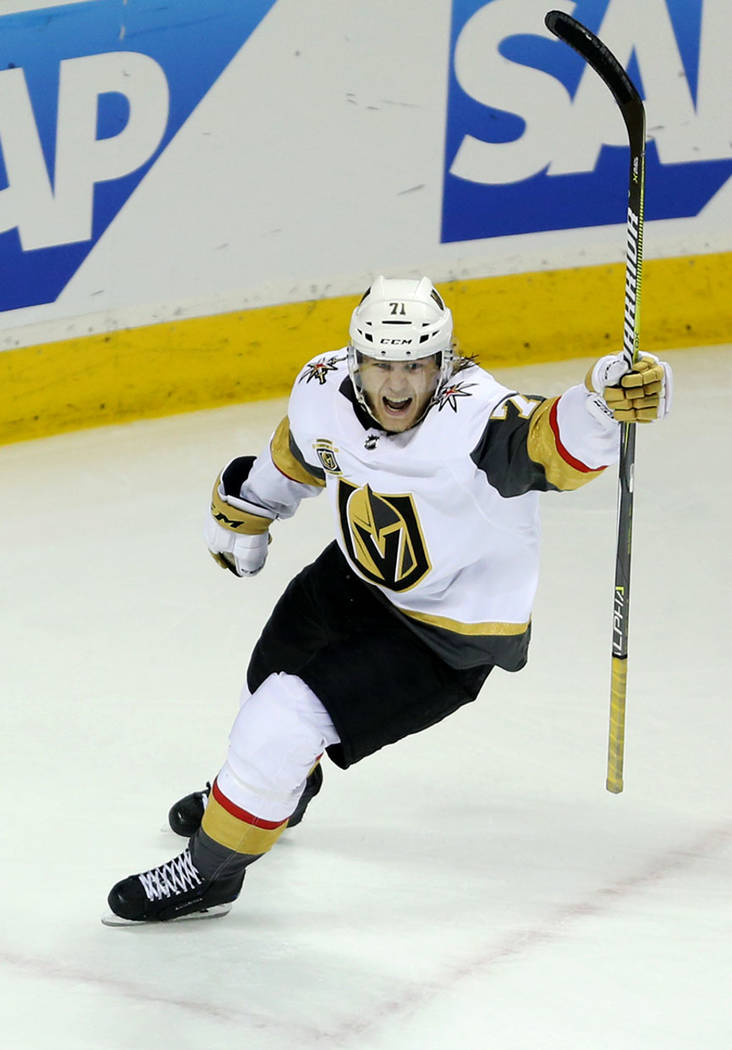 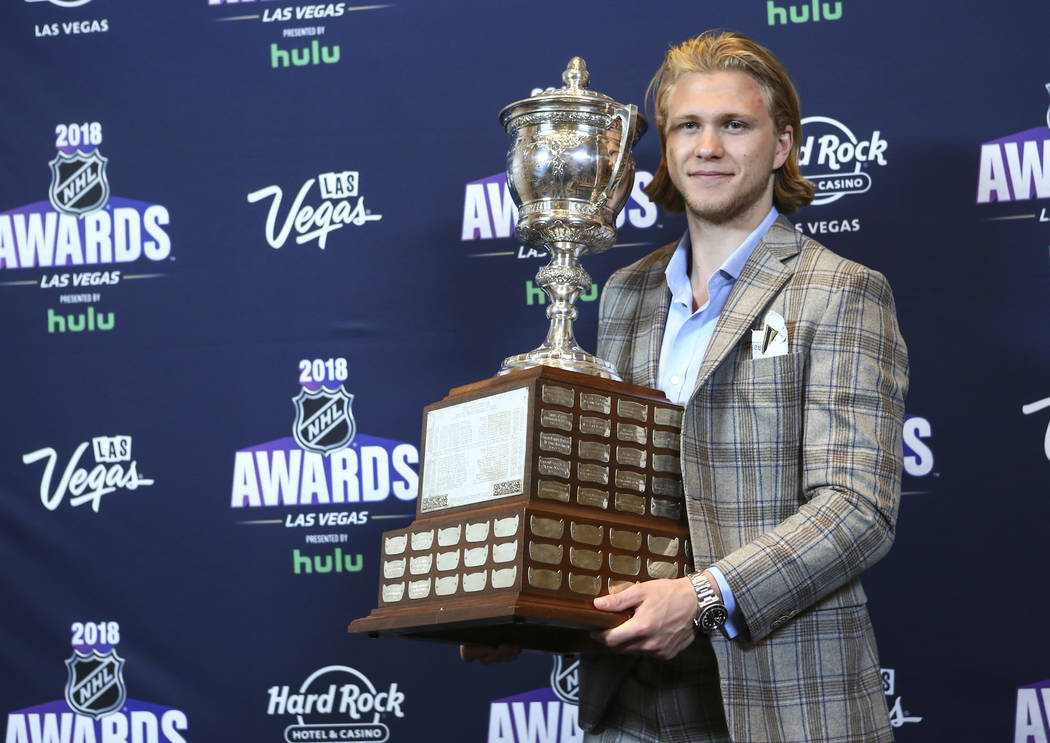 William Karlsson of the Golden Knights poses with the Lady Byng Trophy during the NHL Awards at the Hard Rock Hotel in Las Vegas on Wednesday, June 20, 2018. Chase Stevens Las Vegas Review-Journal @csstevensphoto 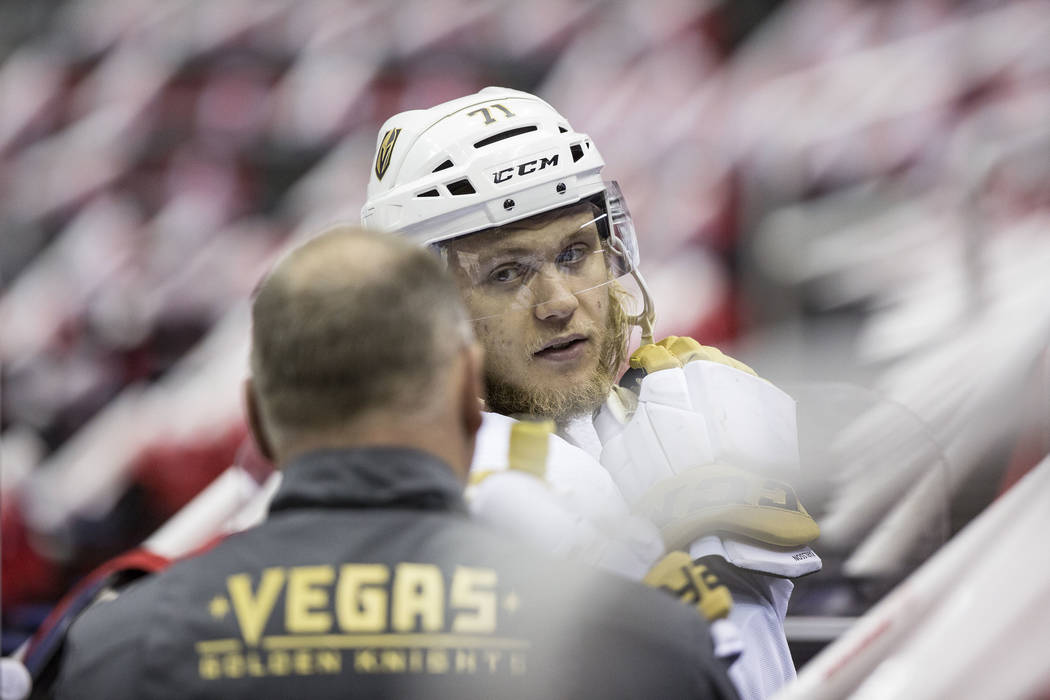 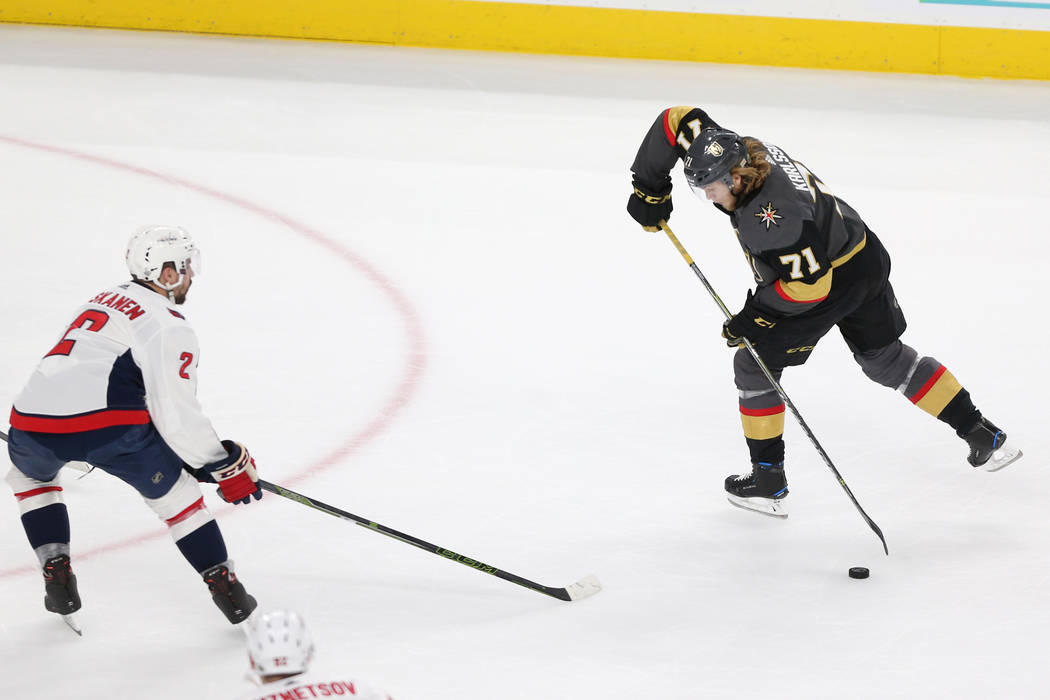 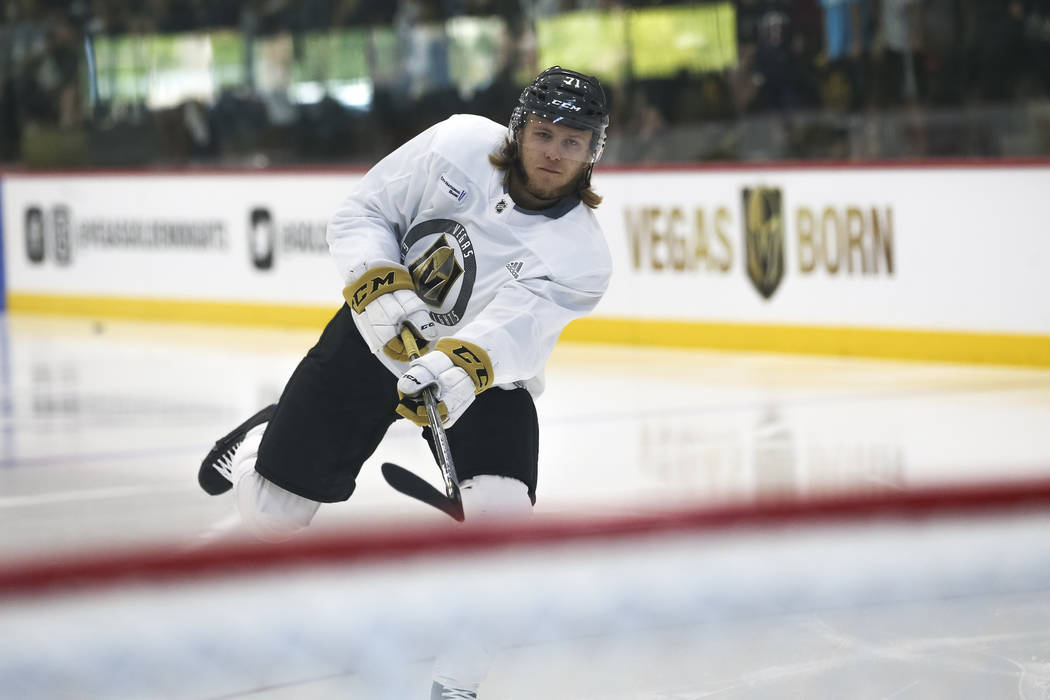 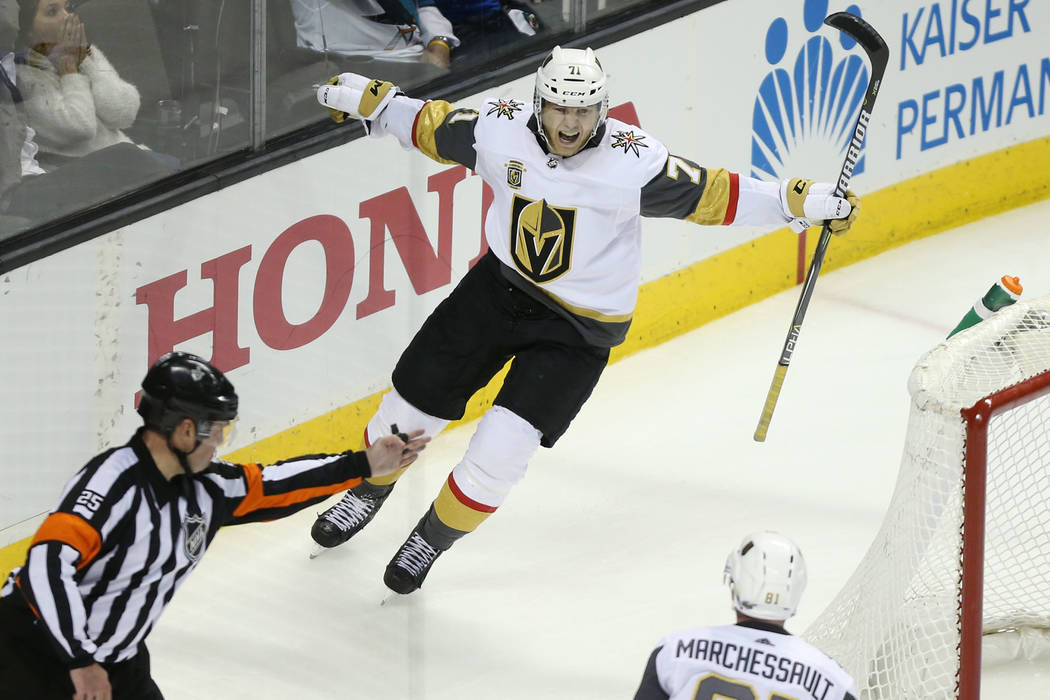 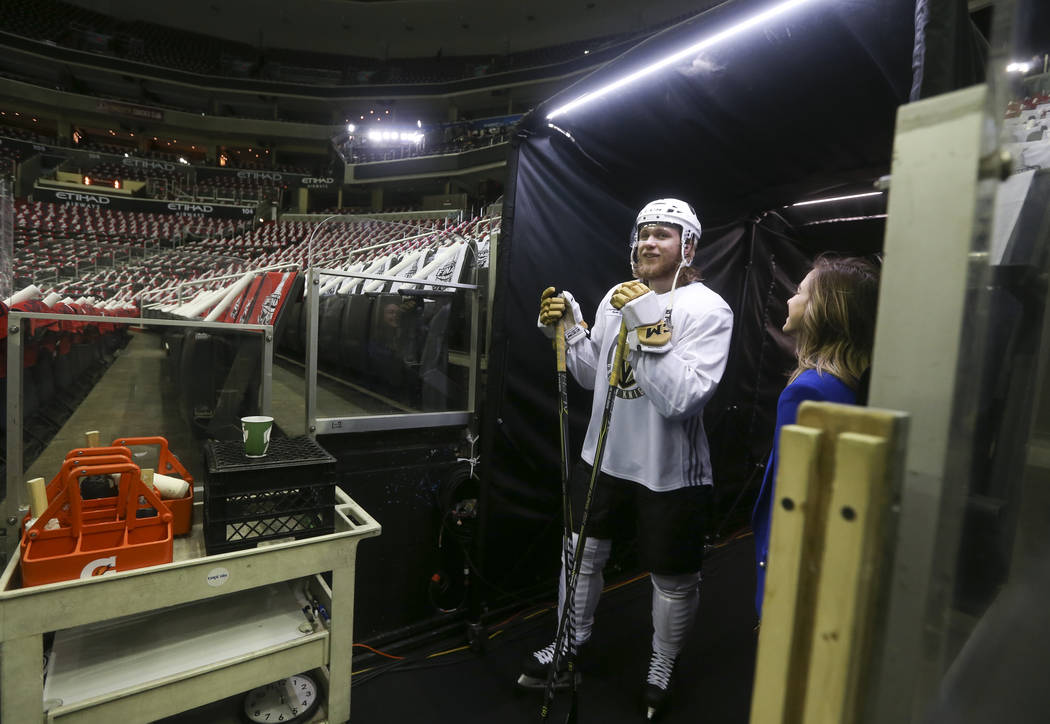 Golden Knights center William Karlsson (71) stands before the start of practice ahead of Game 3 of the Stanley Cup Final against the Washington Capitals at Capital One Arena in Washington on Saturday, June 2, 2018. Chase Stevens Las Vegas Review-Journal @csstevensphoto

William Karlsson’s new contract with the Golden Knights is a win-win.

The restricted free agent was handsomely rewarded Saturday for his career season, and the Knights can wait before committing to the 25-year-old center long term.

“I’m glad that it’s finally done. I think it’s a good deal for both parties,” Karlsson said in a telephone interview. “Now I can prove (myself) again, I guess, so it’s good for the team, and it’s also good for me.”

Karlsson and the team agreed to a one-year, $5.25 million contract for next season, avoiding salary arbitration at the 11th hour. The sides were scheduled to have a hearing Saturday morning in Toronto.

The Knights were unable to iron out a long-term contract with Karlsson and his agent this summer after he exploded for 43 goals, the third-highest total in the NHL.

The sides were minutes away from meeting with an arbitrator before they hammered out a “place-holder” deal.

“It was a good compromise, and as the player is now under contract, this gives us another season to see how he performs and then put a value on him,” Knights general manager George McPhee said in a conference call. “Whatever a player’s value is in the market, we’ll pay it. That’s the right thing to do. But there are cases like this one where sometimes both sides need a little more time to evaluate what that value is.”

Karlsson is eligible to sign an extension starting Jan. 1, and the Knights almost certainly will lock up their No. 1 center should he get off to another hot start.

The Knights used a similar wait-and-see contract approach with forward Jonathan Marchessault last season on the heels of his 30-goal showing with Florida.

Marchessault led the Knights in scoring during the first three months and earned a six-year, $30 million extension in January.

If Karlsson slumps to his previous form — he had 18 goals in three seasons combined with Columbus and Anaheim — the Knights can go through the process again next summer when Karlsson will be a restricted free agent with arbitration rights.

Karlsson is eligible to become an unrestricted free agent in 2020.

“We wanted to be a little bit careful at this point, and to William’s credit, he believes this is who he is and he can continue to perform this way, and we hope that’s the case. We hope we have a consistent 40-goal scorer on our team,” McPhee said. “Both sides are looking forward to getting going next year and at some point next year getting a longer-term deal done.”

Karlsson led the Knights with 78 points and won the Lady Byng Trophy as the league’s most gentlemanly player.

Saturday’s settlement slightly favored Karlsson, who was seeking a $6.5 million annual salary. The Knights countered with an offer of $3.5 million.

The Knights remain more than $8.6 million below the salary cap with defenseman Shea Theodore the lone remaining restricted free agent.

Their top line of Karlsson, Marchessault and Reilly Smith is under contract for this season at an economical $15.25 million combined.

Karlsson will carry the fourth-largest salary cap hit on the team this season behind Paul Stastny, Marc-Andre Fleury and Tomas Tatar.

“I think no matter what would have happened here with the contract situation … there’s pressure trying to do it again,” Karlsson said. “Playing with Marchessault and Smith makes me even more confident. It’s going to be an interesting year, and hopefully we do very well and have a similar season.”

3
CARTOON: Santos is weighing down the GOP