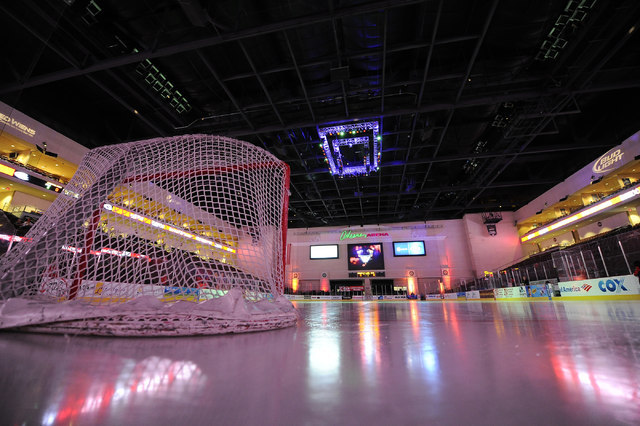 The Orleans Arena is seen before the start of game 4 of the first round of the 2014 ECHL Kelly Cup playoff hockey game between the Las Vegas Wranglers and Alaska Aces Friday, April 25, 2014. Alaska defeated Las Vegas 3-2. It was the final game in Wranglers franchise history. (Josh Holmberg/Las Vegas Review Journal) 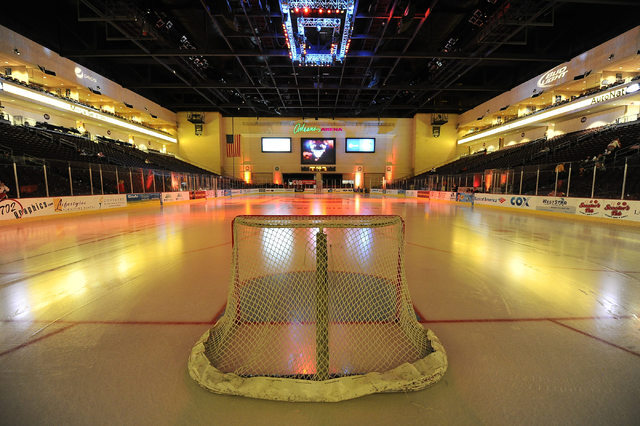 The Orleans Arena is seen before the start of game 4 of the first round of the 2014 ECHL Kelly Cup playoff hockey game between the Las Vegas Wranglers and Alaska Aces Friday, April 25, 2014. Alaska defeated Las Vegas 3-2. It was the final game in Wranglers franchise history. (Josh Holmberg/Las Vegas Review Journal)

▶ 1968: The Las Vegas Gamblers, a senior amateur team, join the California-Nevada Hockey League. The team disbands in 1971. It played at the International Ice Palace.

▶ 1991: The Los Angeles Kings defeat the New York Rangers 5-2 in an NHL preseason game played on an outdoor rink at Caesars Palace. A crowd of 13,007 turns out, the ice holds up on an 85-degree night, and Wayne Gretzky scores for the Kings in the third period.

▶ 1993: The Las Vegas Thunder join the International Hockey League as an expansion franchise. Initially wildly popular, the Thunder are credited with introducing pro hockey to a new audience and laying the groundwork for future NHL endeavors. The team, loaded with present and future NHL players, lasts six seasons. The Thunder played at the Thomas & Mack Center.

▶ 1997: The Los Angeles Kings defeat the Colorado Avalanche 4-3 in overtime in Frozen Fury I, an NHL exhibition series that continues today. Frozen Fury was at the MGM Grand Garden through 2015. Two games will be played at the T-Mobile Arena in 2016.

▶ 1997: The Nevada Gamblers/Blackjacks join the Western States Hockey League for junior clubs. The team lasts two seasons. Several other junior hockey efforts are started and fold with the exception of the Las Vegas Storm, which recently concluded its third WSHL campaign. The Storm play at the Las Vegas Ice Center.

▶ 2003: The Las Vegas Wranglers join the ECHL. A rung below the erstwhile IHL in on-ice talent, the Wranglers carve out a sizable niche on the local sports scene and outlast the Thunder, enduring through the 2013-14 season. The franchise becomes known for zany promotions such as Dick Cheney Hunting Vest Night and games starting at midnight featuring between-periods concerts by rock tribute band Mini Kiss. The Wranglers played at Orleans Arena.

▶ 2011: Jason Zucker, who moved to Las Vegas when he was 2 months old, makes his NHL debut with the Minnesota Wild. Zucker recently completed his fourth full season with Minnesota. He is the first hockey player from Las Vegas to skate in the NHL.