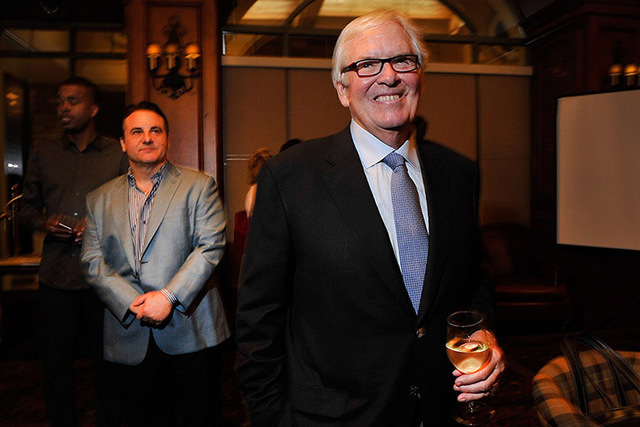 If the NHL gives the expected go-ahead Wednesday to a league expansion that puts a professional hockey team in Las Vegas, the practice puck likely will drop somewhere in Summerlin.

Businessman Bill Foley, who’s leading the bid for a Las Vegas team, said over the weekend he still plans to build the team’s headquarters and practice facility in the master-planned community in the western valley, but that he hasn’t finalized the site.

That marks a change from earlier this year, when property on Far Hills Avenue just west of the 215 Beltway, in the city of Las Vegas, was identified as the future site of a two-rink practice facility.

The two sites fall on opposite sides of the line separating the city of Las Vegas and Clark County that runs through a section of Summerlin.

Las Vegas officials had been actively talking to Foley about the Far Hills site but said they heard Foley’s organization decided to switch gears and look at Summerlin property outside city limits.

Little other information about practice facility plans was available Monday, in advance of an expansion vote Wednesday by the NHL Board of Governors.

Clark County spokesman Erik Pappa said in an email that no records have been submitted to the county related to a proposed NHL practice facility. He deferred comment to Foley’s organization.

Foley said more information would be available after Wednesday’s vote.

NHL owners begin arriving in Las Vegas Tuesday and will meet Wednesday at Encore, where the vote to add a 31st team to the league is expected to be approved. The team would open play at the 17,500-seat T-Mobile Arena for the 2017-18 season.

Before identifying the Far Hills site as the location for the practice facility, another site in unincorporated Clark County, at Warm Springs Road and Durango Drive, was in the mix.

Las Vegas City Councilman Bob Beers, who represents the city’s southwestern corner, said he didn’t think a decision to move the practice facility outside Las Vegas city limits would be a major disappointment.

“The important point is you’re going to have this really cool facility with two sheets of ice out here in Summerlin,” Beers said.

The potential for area youth to use the ice when the pros aren’t skating is a benefit, Beers said.

Earlier this year, when the Far Hills site was proposed for the practice facility, plans included locker rooms, coaches’ offices, a video room and bleachers, with rinks available for use by youth hockey groups.