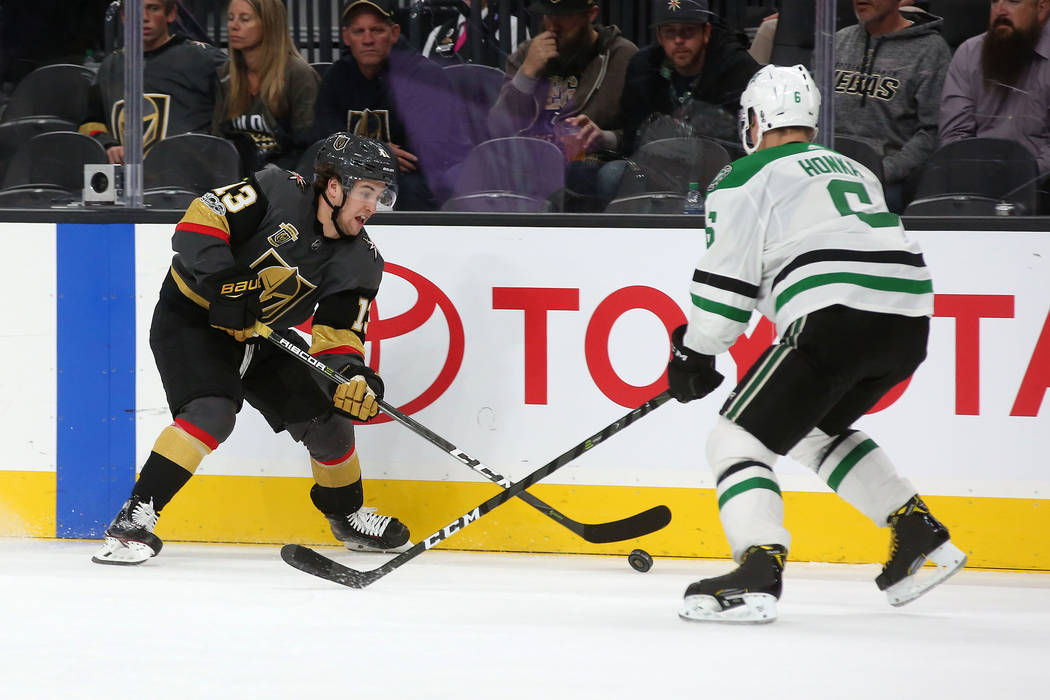 One of these days, the puck is going to go in the net for Brendan Leipsic.

The 5-foot-10-inch left wing should have a dozen goals for the Golden Knights by now. That’s the kind of quality chances he has had this season. However, he’s still without a goal in 25 games, though he has 10 assists.

“You can’t really get frustrated,” said Leipsic, who remains on the Knights’ third line with Cody Eakin and Alex Tuch and had four shots on goal in Tuesday’s 4-3 win over Tampa Bay. “You don’t want to press because that only makes it worse.”

His linemates continue to set him up and his coach continues to roll Leipsic out there. And as long as Leipsic is taking care of business at the defensive end of the ice and being responsible without the puck, Gerard Gallant isn’t worried about whether or not he scores. Leipsic and defenseman Brad Hunt are the only two regulars who have yet to score this season.

“He’s a hard-working kid who has gotten much better defensively,” Gallant said. “He’s going to score eventually. I just want him to have a good shift and play both ends of the ice, which is what he has been doing.”

There were two interesting and somewhat dubious calls late in the third period Tuesday.

The first went to the Knights’ Deryk Engelland, who broke his stick and dropped it to the ice, only to be called for throwing his stick at the puck with 3:08 to play and the game tied 3-3. The Knights managed to kill off the penalty.

The other call was more costly as Braydon Coburn was whistled for holding James Neal’s stick with 24 seconds to play. That would lead to Shea Theodore’s game-winner with 2.3 seconds remaining in regulation.

“Yeah, that’s a crappy way to lose a hockey game,” Lightning captain Steven Stamkos said. “We fight back to tie the game. I don’t think anyone would’ve complained if he doesn’t call that penalty on them at the end. That’s an iffy call. Then I think he feels the need to make up for a mistake.

“At that point in the game, the puck’s in the corner, there’s a battle going on. I know it’s tough. I just think it was the wrong call at that time in the game.”

Theodore’s goal was the fifth straight game a Knights defenseman has scored. He said it was about keeping the play alive.

“I just wanted to shoot it as hard as I could and fortunately it went in,” Theodore said.

The Knights reassigned forward Tomas Hyka to Chicago of the American Hockey League on Wednesday. Hyka was called up Monday but was a scratch against the Lightning.