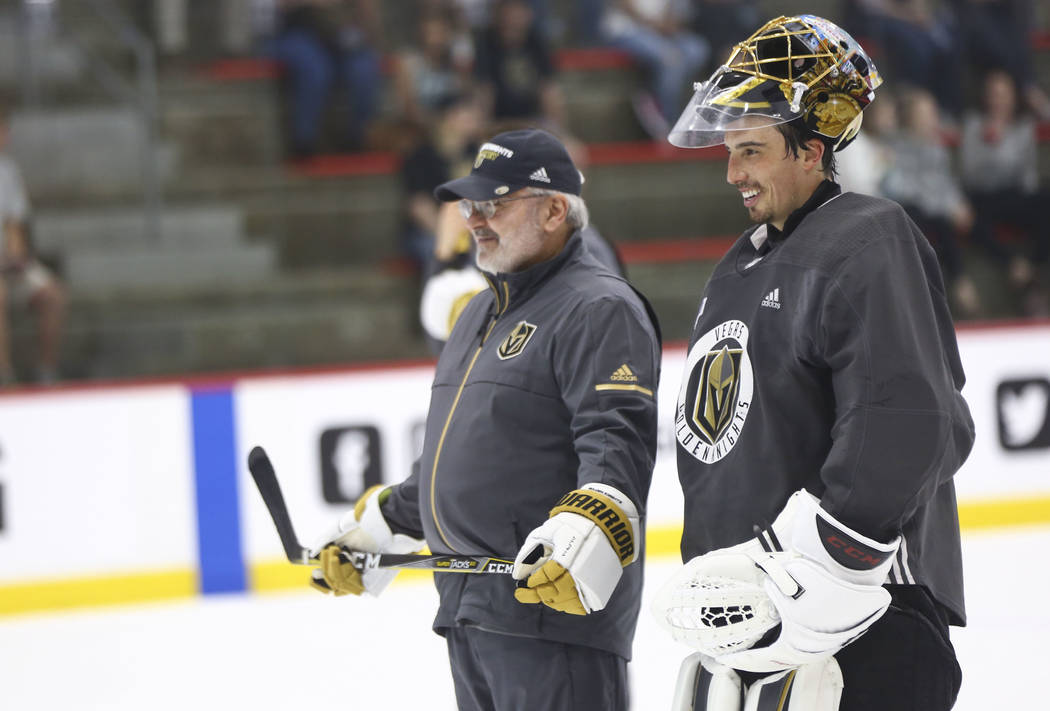 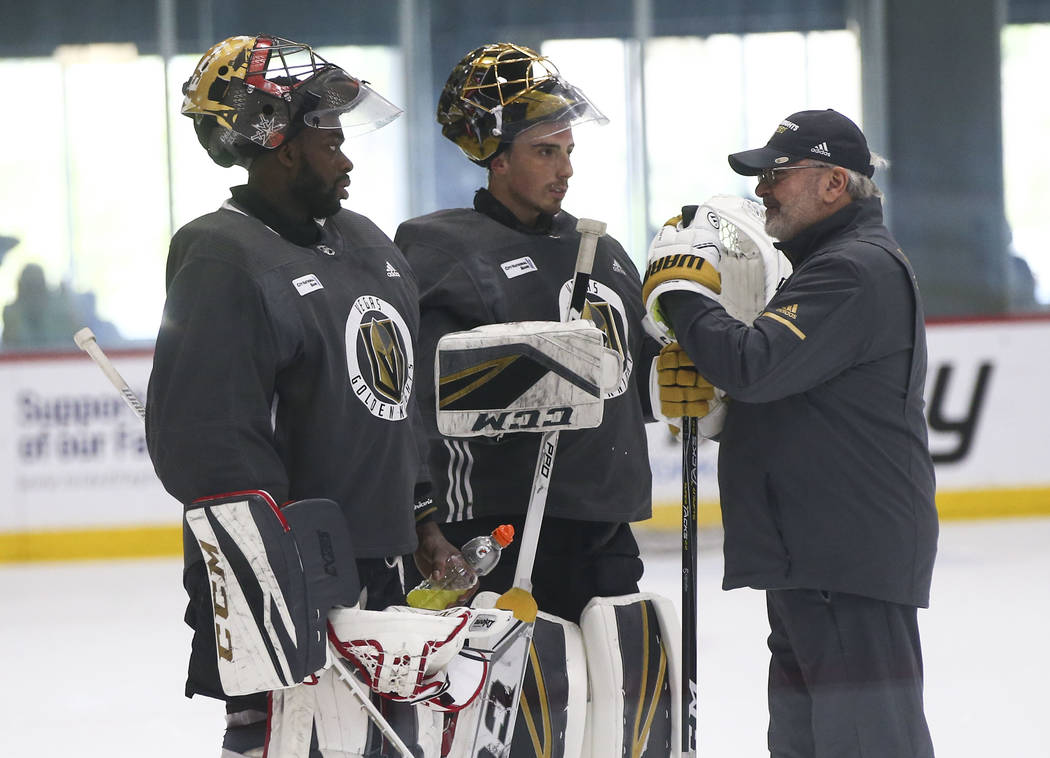 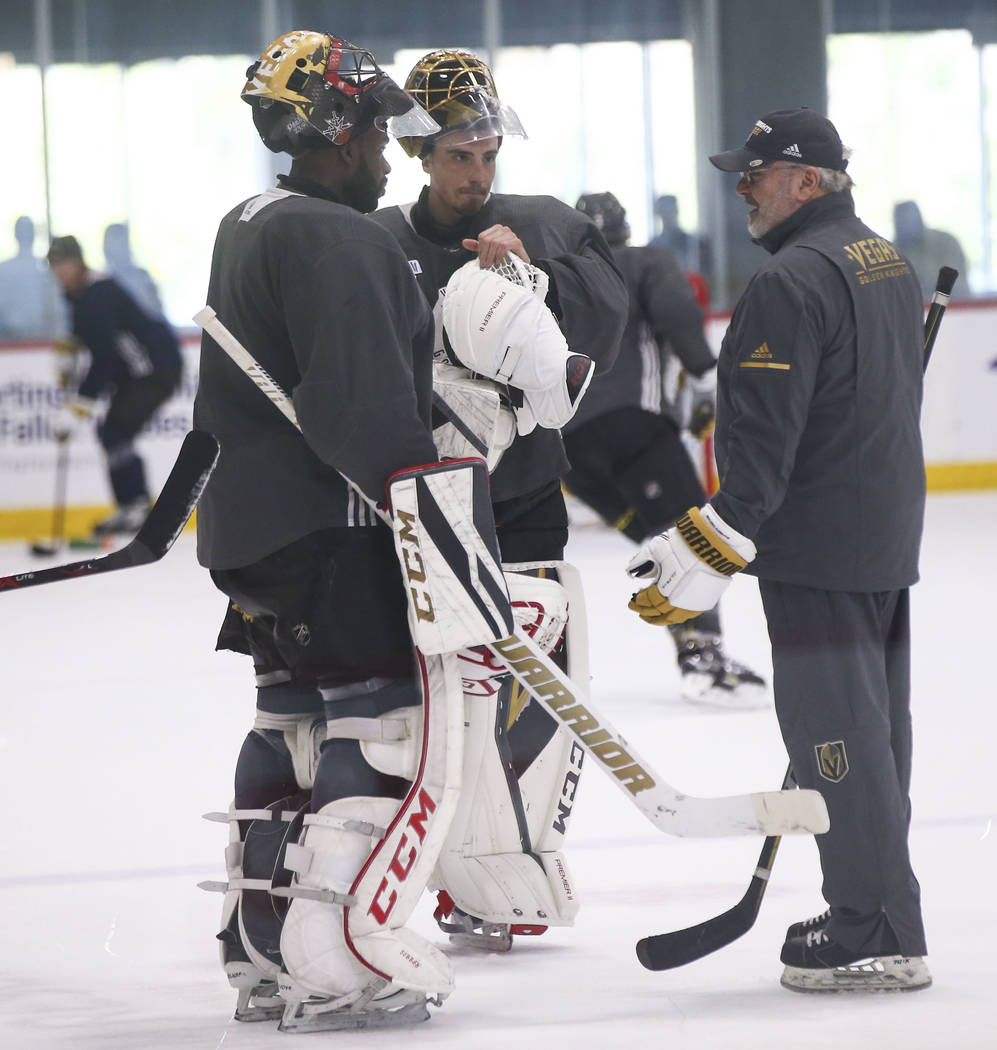 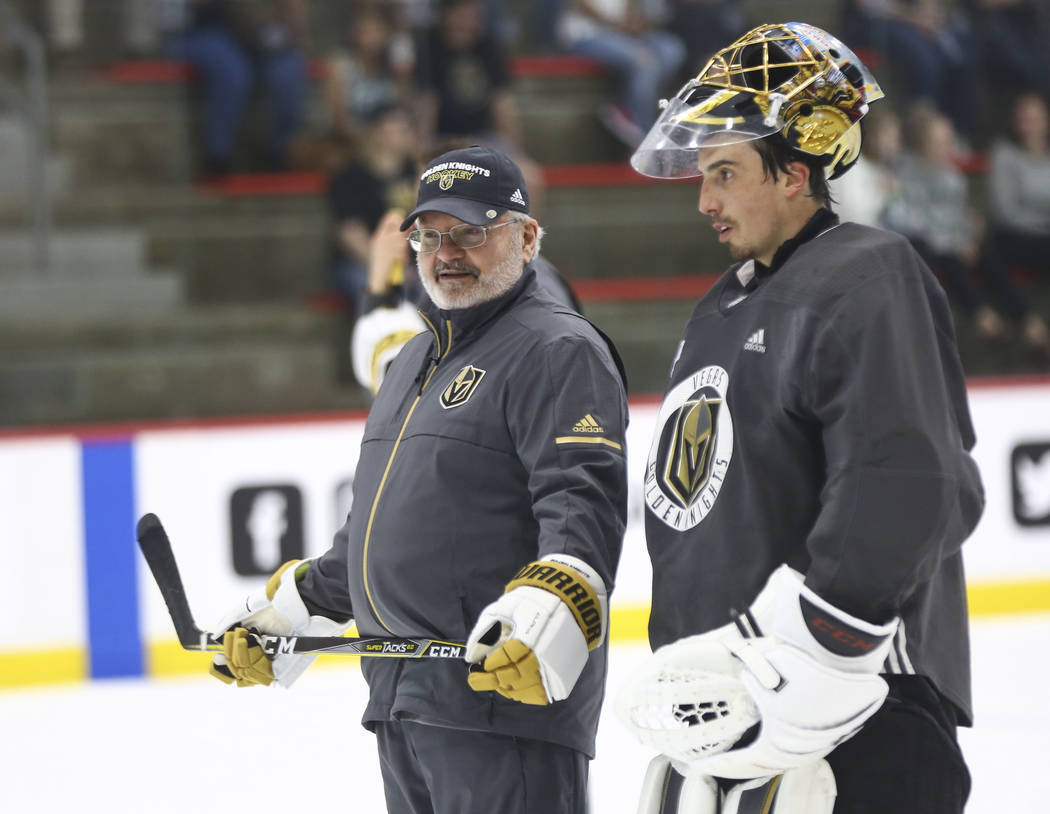 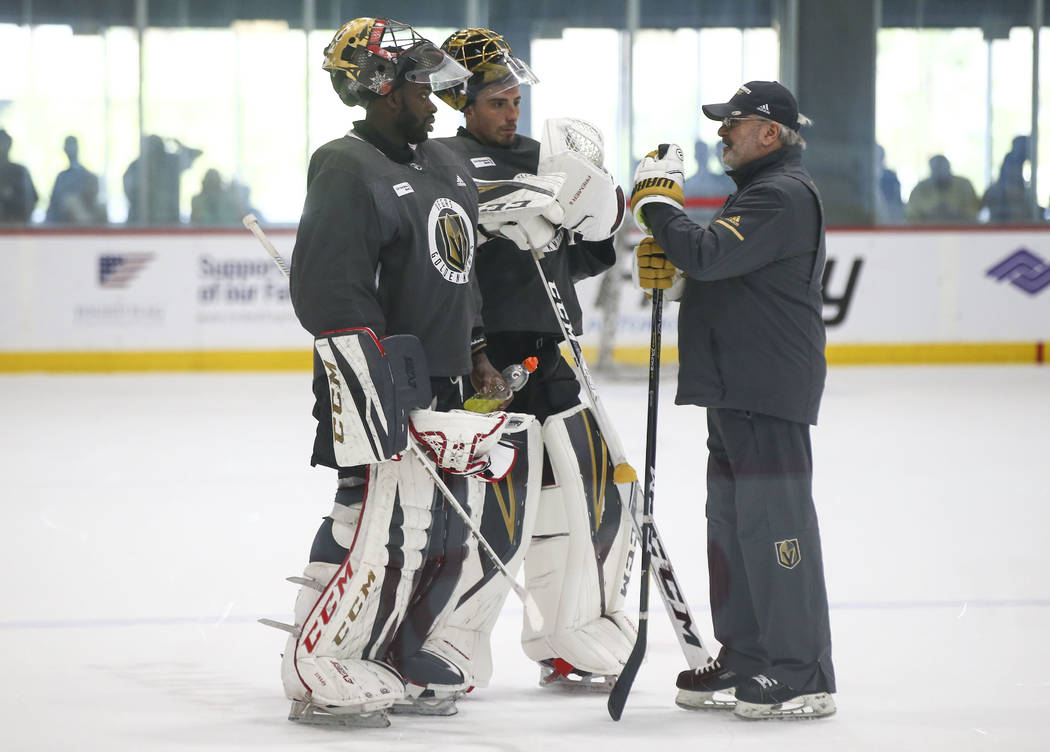 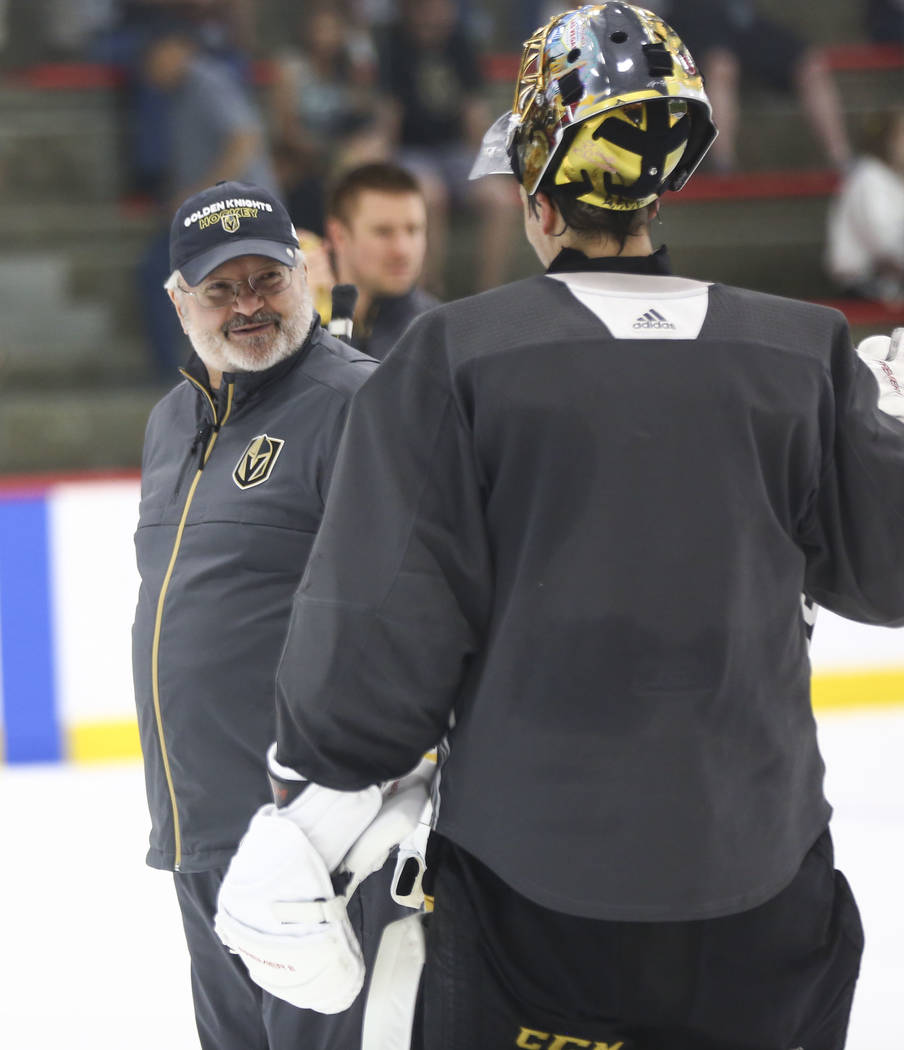 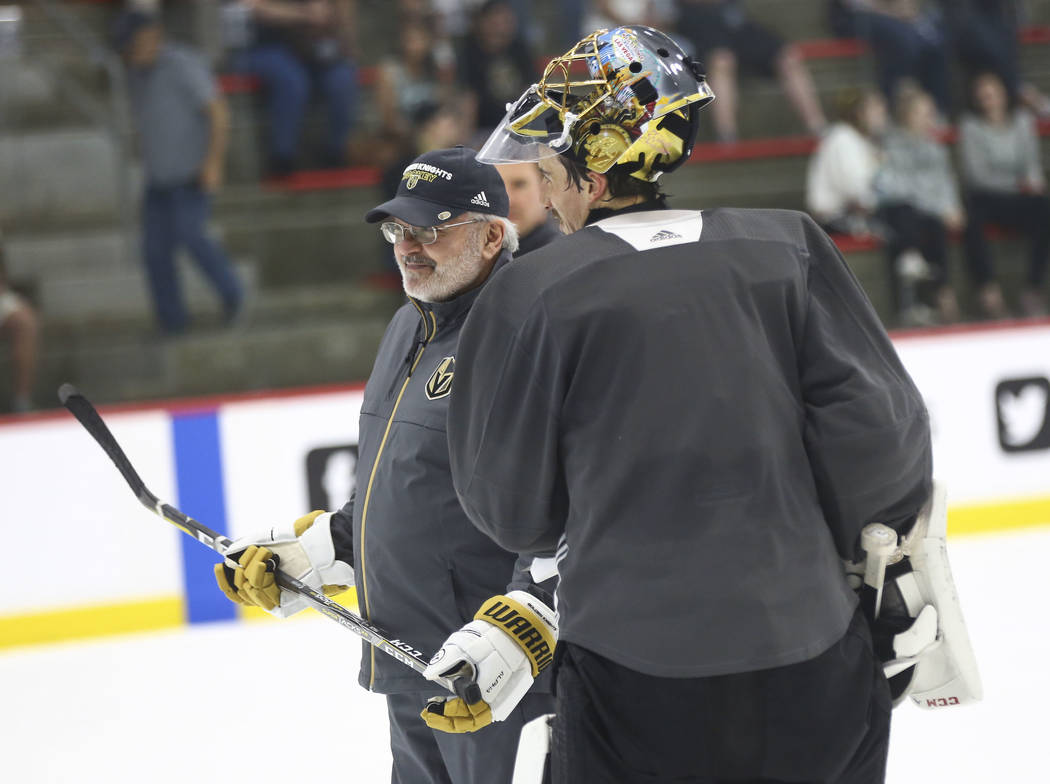 WINNIPEG, Manitoba — Marc-Andre Fleury was already a pretty good goaltender when the Golden Knights selected him in the expansion draft a year ago.

Three Stanley Cup rings were all the proof you needed. But as good as Fleury had been during his time with the Pittsburgh Penguins, David Prior thought he could be even better despite the fact Fleury wouldn’t have Sidney Crosby, Evgeni Malkin, Phil Kessel and Kris Letang playing in front of him.

Prior, the Knights’ goaltending coach, wasn’t going to change Fleury’s style. Instead, he looked for cerebral things that would enhance the 33-year-old’s play. 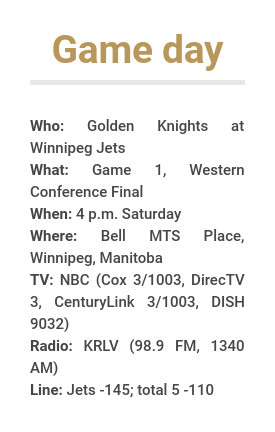 “He’s got a real ability to connect with the people he’s working with,” assistant general manager Kelly McCrimmon said of Prior, who was not made available by the team for comment. “With Malcolm Subban and Marc-Andre Fleury, they speak a language that you and I don’t understand. But they do.

“He’s done tremendous work, not only with those two goaltenders but during a stretch where we had a lot of injuries at that position. Maybe that was his best work.”

And as the Knights begin the next leg of their Stanley Cup journey Saturday in Game 1 of the Western Conference Final against the Winnipeg Jets, they do so knowing they have the best goalie in the playoffs. In his first 10 games, Fleury has posted a 1.53 goals-against average, a .951 save percentage and four shutouts. It has carried over from the best regular season of his career where Fleury’s numbers included a 2.24 GAA and a .927 save percentage.

“Most of it was about being ready, the mental aspect of it,” Fleury said Friday at MTS Bell Place. “His approach is good and healthy.

“I think he’s helped. He’s changed some of my on-ice play. The game changes and he’s helped make me a better goalie. I think time, experience, all that stuff, I think helps you understand things mentally on the ice, how to take care of yourself. You put all of that together and it makes you better.”

Prior pushed hard for general manager George McPhee to get Fleury.

“He obviously studies goaltenders all around the league and looks at the way that they’re playing the game,” McPhee said. “He either believes that they’re playing it right and can get better, or they’re doing all the right things. So he was excited and he really advocated for him in our meetings and thought that he could make him even better than he’s been.

“We certainly knew what we were getting in terms of ability. We like the calming effect he has on this team. When he plays, he’s really good when you need him the most. Needless to say you don’t get to the third round in this league unless you’ve got a goaltender that’s playing well.”

“For us, we wouldn’t be here if we didn’t have him,” Neal said. “Every night he’s making huge saves for us at the right time. For a guy who’s had a great career and won so many Stanley Cups, he still has something to prove and wants to be better each day. Guys see that, especially the younger guys, and it builds a lot of character in our room.”

The Jets’ Blake Wheeler said getting the best of Fleury will be a challenge over a seven-game series.

“Tremendous,” Wheeler said of Fleury’s 2018 postseason. “Even if he wasn’t playing at the level he is right now, I think he carries a ton of respect throughout the league, certainly throughout our lineup.

“This time of year, a hot goaltender can carry a team a long way and he’s at the top of his game so we know it’s not going to be easy.”