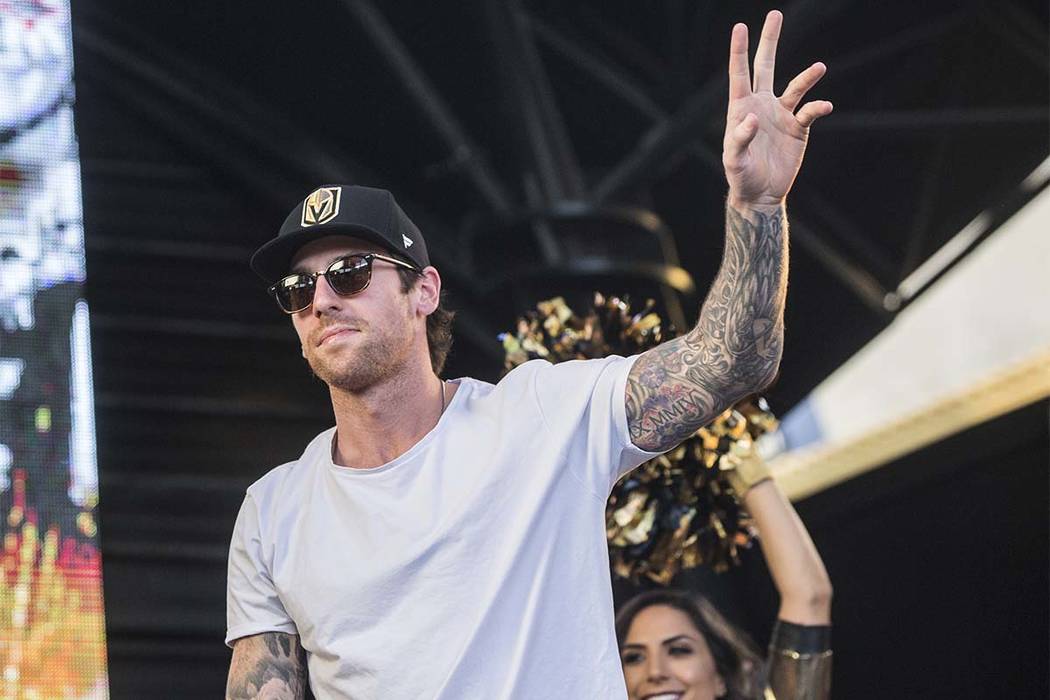 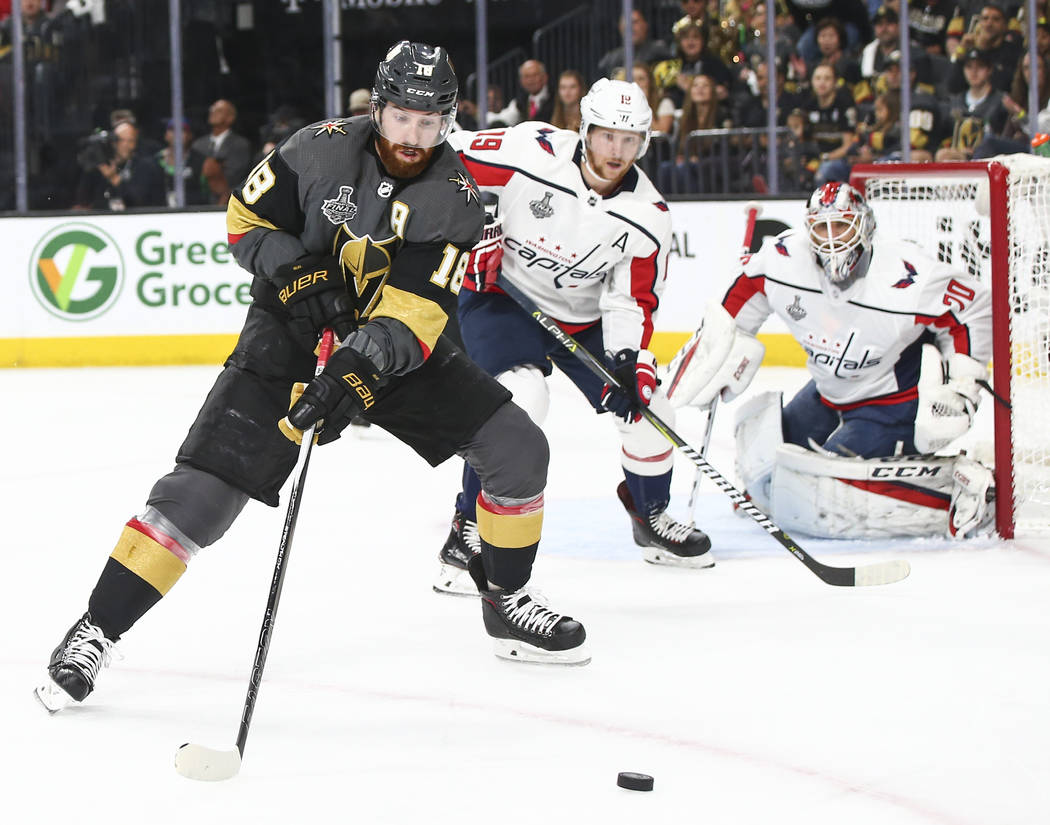 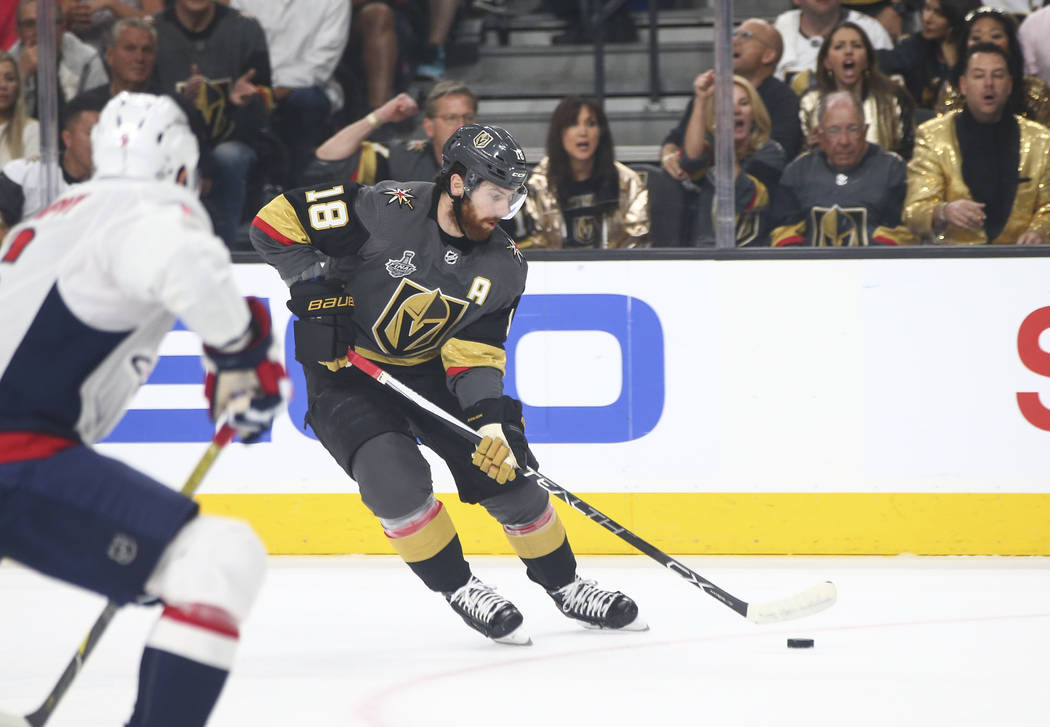 Golden Knights left wing James Neal (18) lines up his shot before scoring against the Washington Capitals during the first period of Game 2 of the NHL hockey Stanley Cup Final at the T-Mobile Arena in Las Vegas on Wednesday, May 30, 2018. Chase Stevens Las Vegas Review-Journal @csstevensphoto

James Neal served as the frontman for the “Golden Misfits,” a nickname he bestowed upon the expansion team in a group text chat prior to its first season.

But as the Golden Knights are finding out, the band doesn’t always stay together.

Neal was the latest free-agent departure from the Western Conference champions, as the veteran forward hammered out a five-year, $28.75 million deal with division rival Calgary that was finalized early Monday.

“It’s a tough process, for sure,” Neal said in a phone interview with the Flames that the team posted on its website. “It’s a hard day, but for me, coming to Calgary, it’s a place I’ve always loved.

“They’ve got a great, young core. We’ve got a great group of guys. I’m just excited to be a part of it. I want to win, and I think we’re right there.”

Knights general manager George McPhee said Sunday the team was still talking with Neal and his agent about a new contract.

But Calgary made a five-year offer to entice Neal, who turns 31 in September. The two sides worked into the early hours to finalize the deal.

Neal’s agent, Patrick Morris, could not be reached for comment.

Earlier today, we caught up with James Neal on the 📞 to talk about his decision to sign a five-year deal with the #Flames! pic.twitter.com/4KkMstyi32

“We felt, ultimately, this is the deal that needed to be done to get the player. And that was priority No. 1. And that’s what the market was bearing,” Flames general manager Brad Treliving said in an interview on the team’s website.

“We made a decision that we were prepared to go to this level. And we add a player that fills a real need for us. To get a big guy that can score like he does, I think he fits seamlessly in our lineup and really checks off a big box for us.”

Neal missed all of training camp after recovering from surgery on his broken right hand and scored the first official goal in franchise history in the season opener at Dallas.

In 71 games, Neal finished with 25 goals, which would have ranked second on the Flames behind Sean Monahan.

He added six goals and 11 points during the postseason, helping the Knights reach the Stanley Cup Final.

“It’s obviously tough losing (the Stanley Cup Final). You never want to leave your team after you go on a run like that,” Neal said in the phone interview. “But that’s the way the business is.

Neal has 10 straight seasons of at least 20 goals and will add scoring punch to a team that finished fifth in the Pacific Division and missed the playoffs for the second time in three seasons.

The Flames, who already made several moves this offseason, ranked 27th in the league in goals per game.

“Certainly James is a guy we’ve targeted and really a position we’ve targeted,” Treliving said. “This is a guy who’s been just a real productive player and fits a real specific need for us. We’re excited to add him.

The Knights and Calgary play four times, with the first meeting at Calgary on Nov. 19. The Flames visit T-Mobile Arena on Nov. 23.