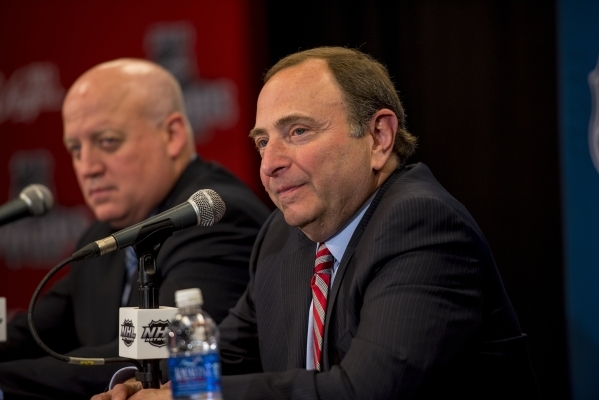 The expansion talk for the NHL is about to heat up.

The league’s executive committee is expected to meet Wednesday in New York for a special session to discuss the bids by Las Vegas and Quebec City to join the NHL for the 2017-18 season. And while no decision on awarding a team is expected to come from the meeting, the overall direction the league will take is expected to be put into greater focus.

Bill Foley, the billionaire businessman who is heading Las Vegas’ bid, said he is aware of the meeting but will not be attending. Foley also said he is not planning to attend the NHL’s All-Star Weekend in Nashville, Tenn., at the end of the month.

The 10-member executive committee, chaired by Boston Bruins owner Jeremy Jacobs, has been overseeing the process since July when Foley and the Quebecor Corporation, which is bidding to bring the NHL back to Quebec City, filed their applications to join the NHL. Both applications came with nonrefundable deposits of $2 million. The overall expansion fee is expected to be $500 million per team.

The NHL last expanded in 2000 when Columbus and Minnesota joined the league. At the time, the NHL did not operate under a salary cap.

Wednesday’s meeting reportedly is about addressing those issues and coming up with definitive answers that can be presented to the entire Board of Governors. The 30-member board is meeting Jan. 30 in Nashville.

Close to 14,000 fans have made deposits on season tickets for the Las Vegas NHL team. Foley already has a lease in place to play at the 17,500-seat T-Mobile Arena located behind Monte Carlo and New York-New York. He has a request for proposal with Clark County to build a practice facility off Interstate-215 near Durango Drive and Warm Springs Road. His company, Black Knight Sports and Entertainment, has its offices in Summerlin.

The NHL is aware of all this. Foley said last month he maintains contact with Commissioner Gary Bettman and other league officials about what is happening in Las Vegas. He has been thoroughly vetted by the league as to his ability to finance the team, the details on his arena lease, the ticket sales and proposed marketing plans. To his knowledge, there have been no issues.

“We’re just waiting to hear from the NHL,” he said.