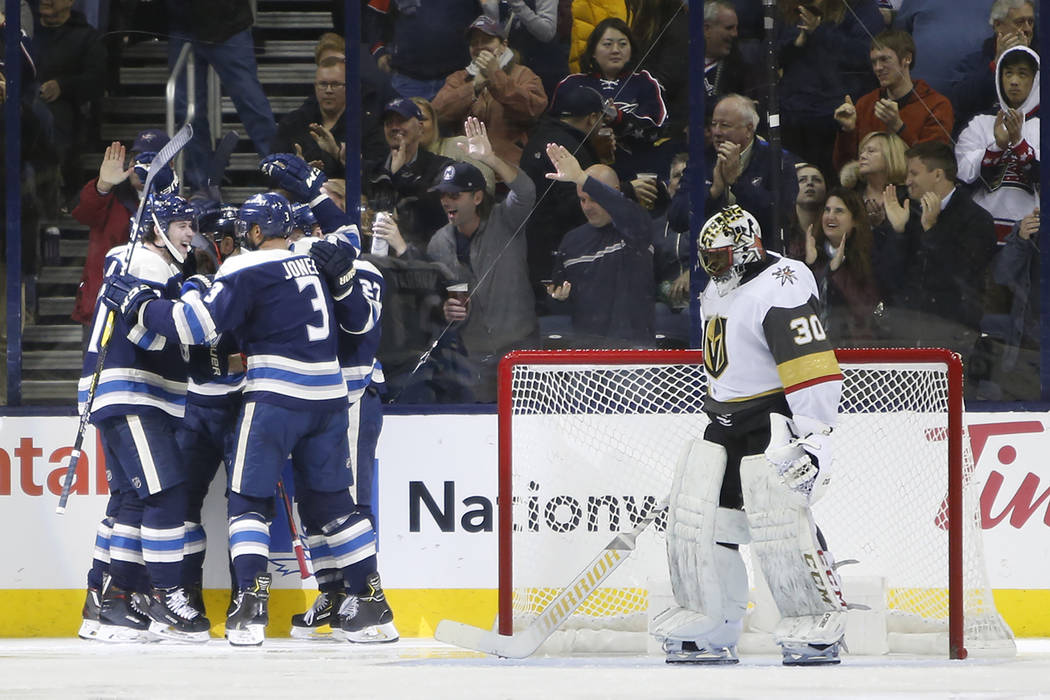 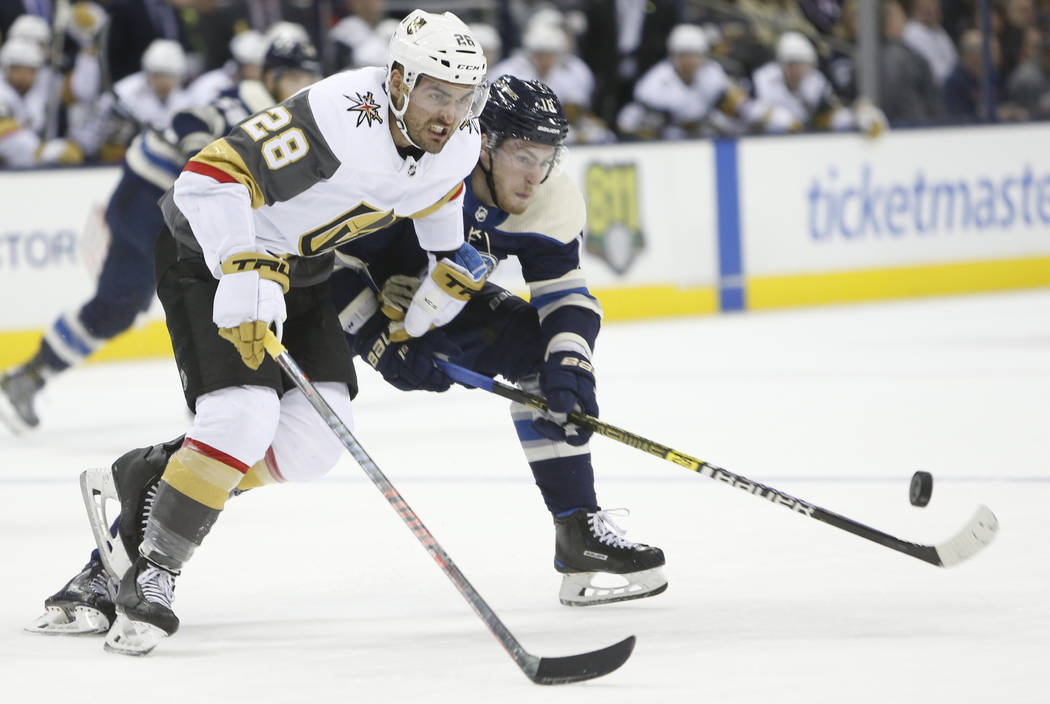 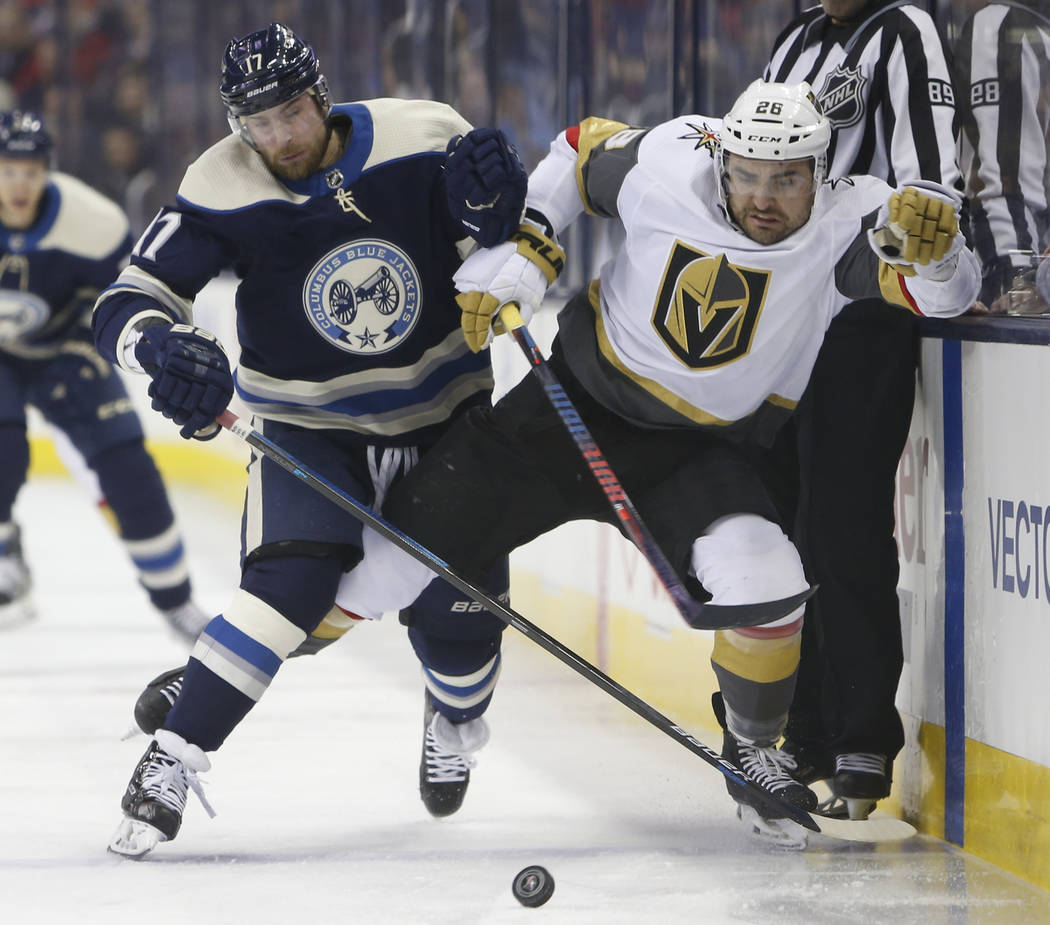 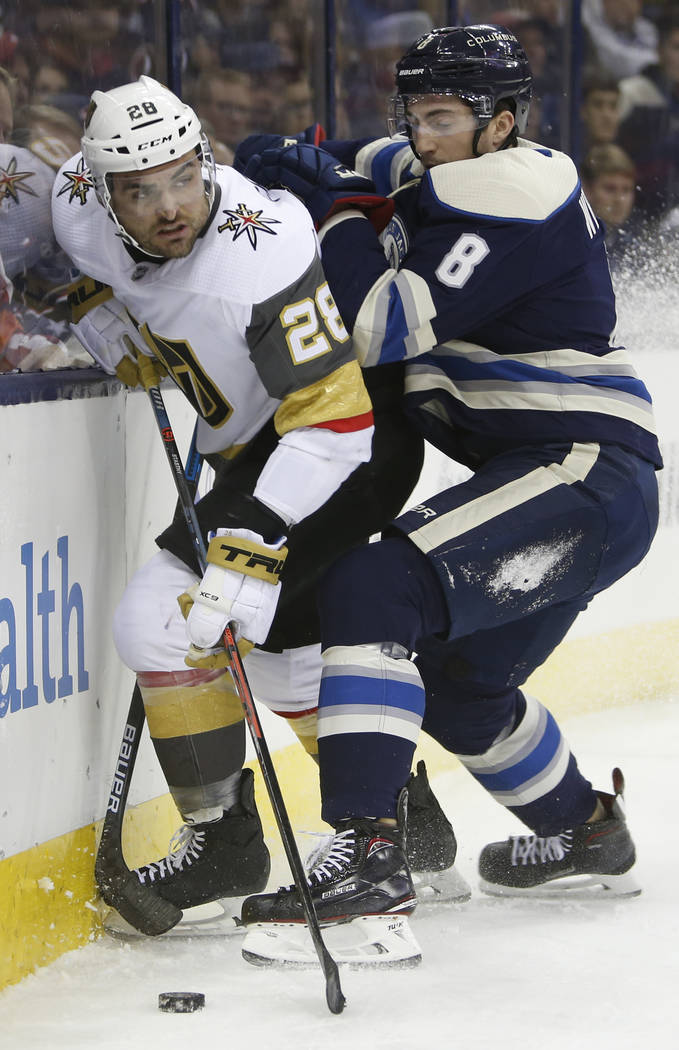 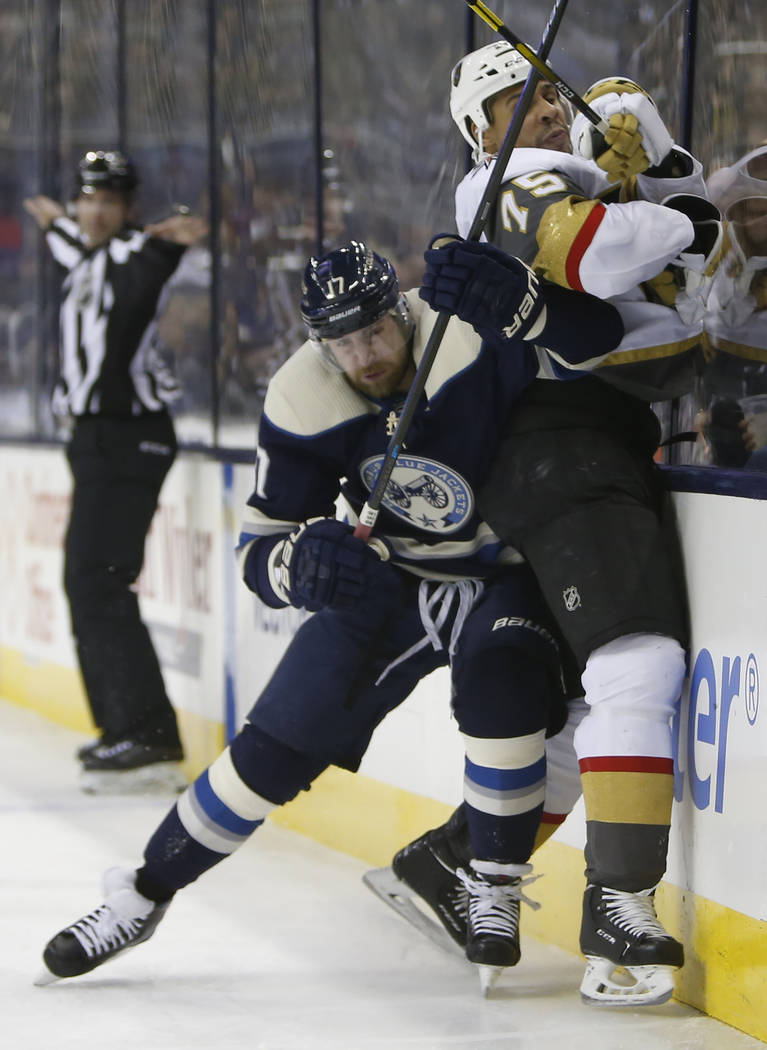 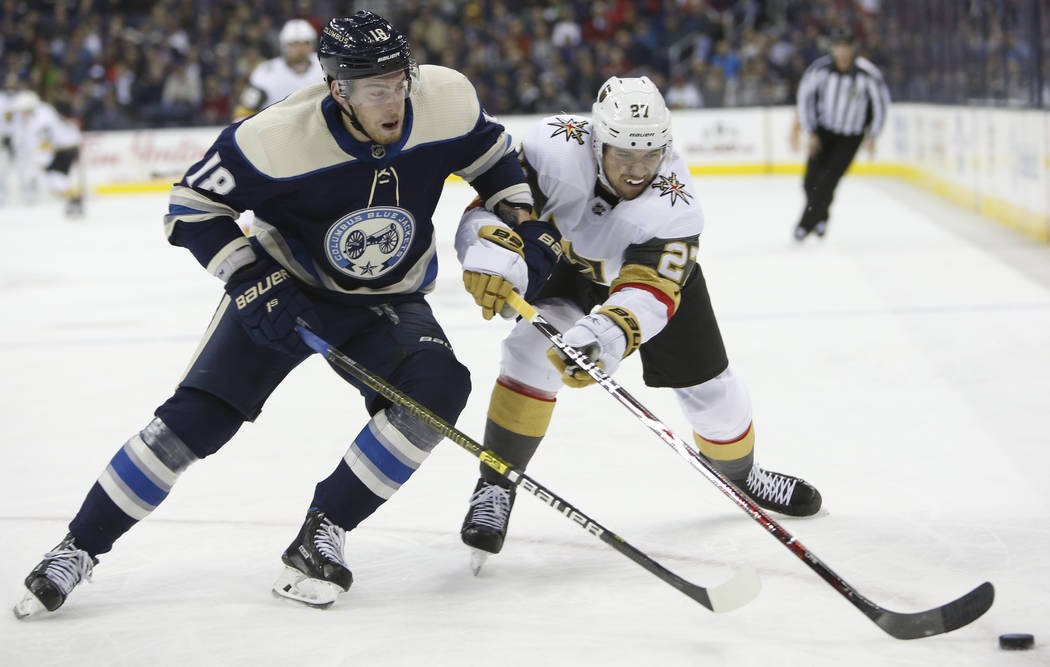 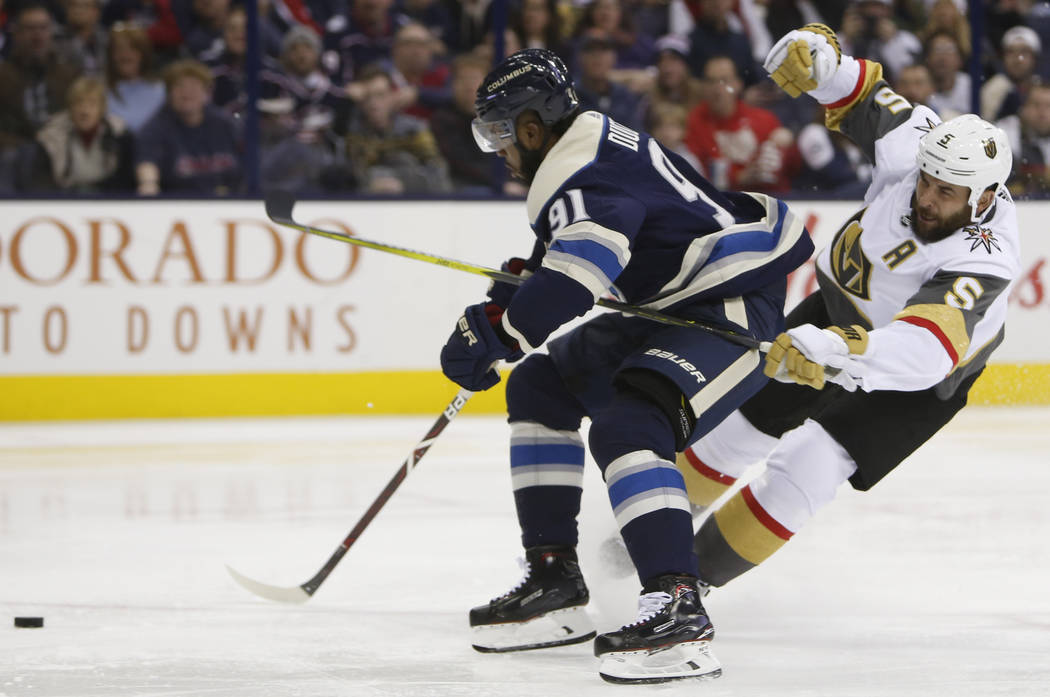 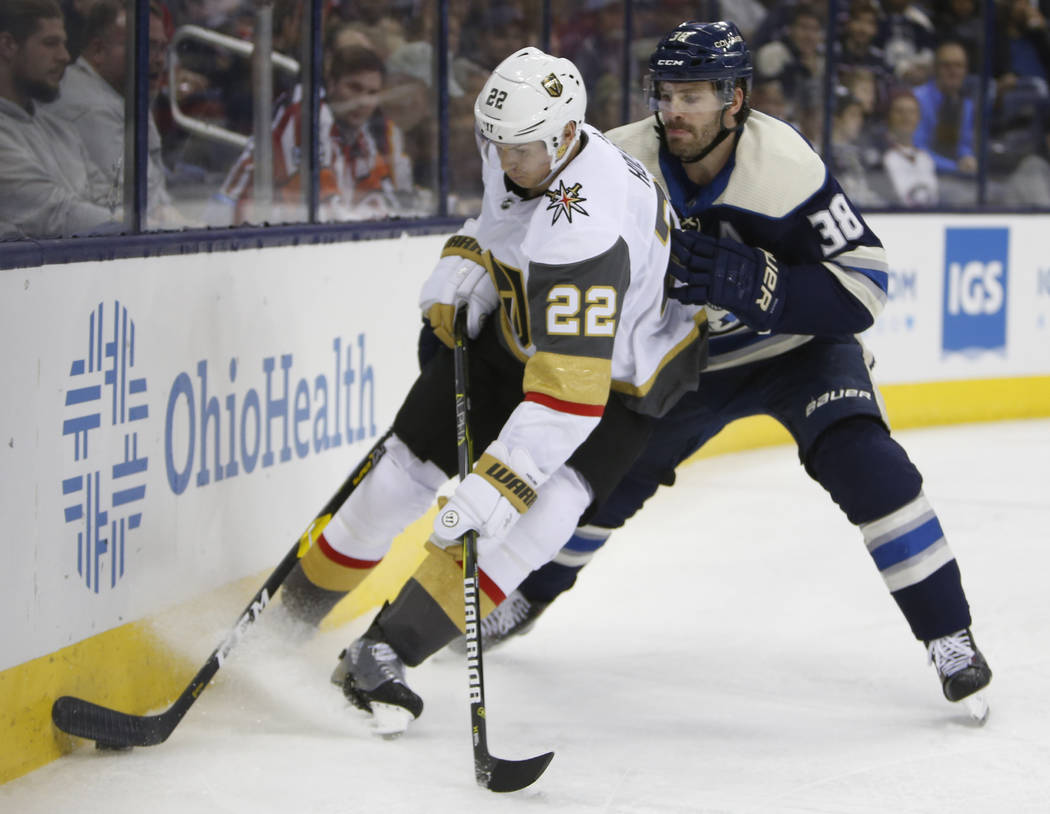 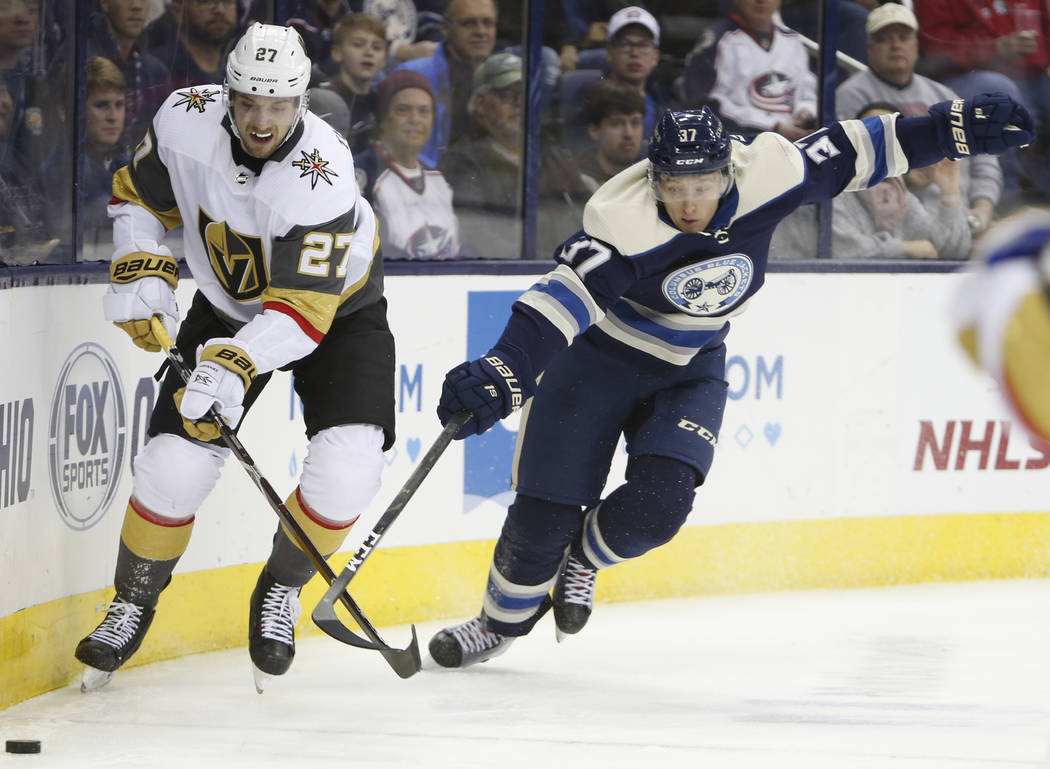 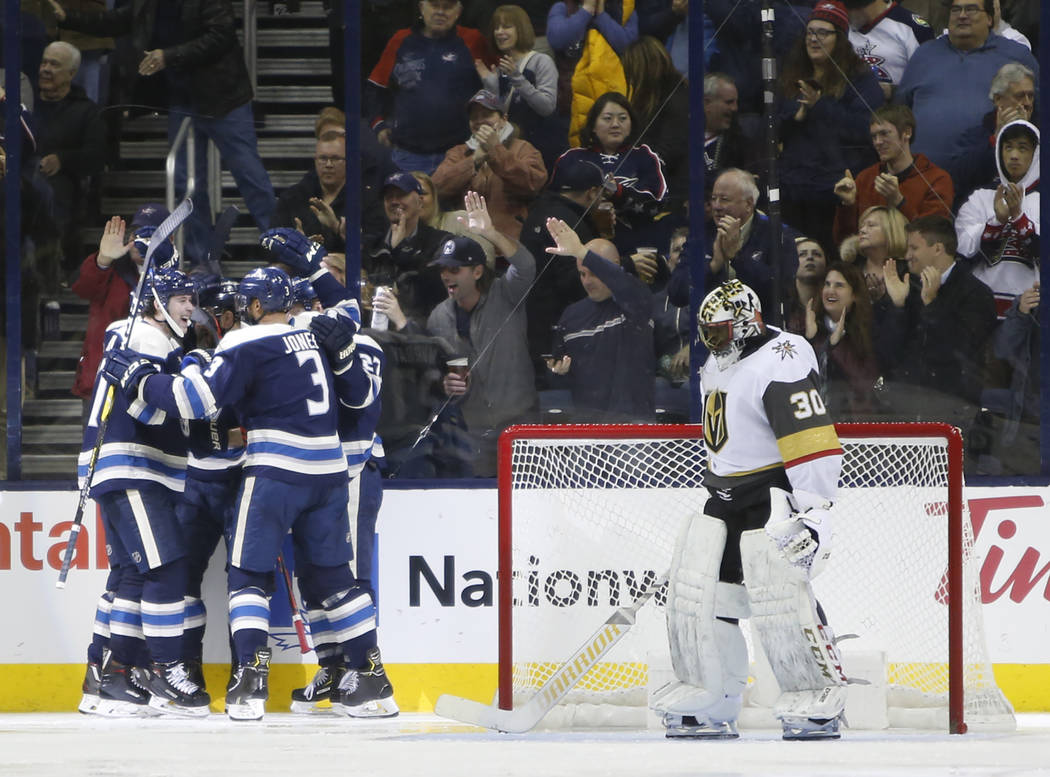 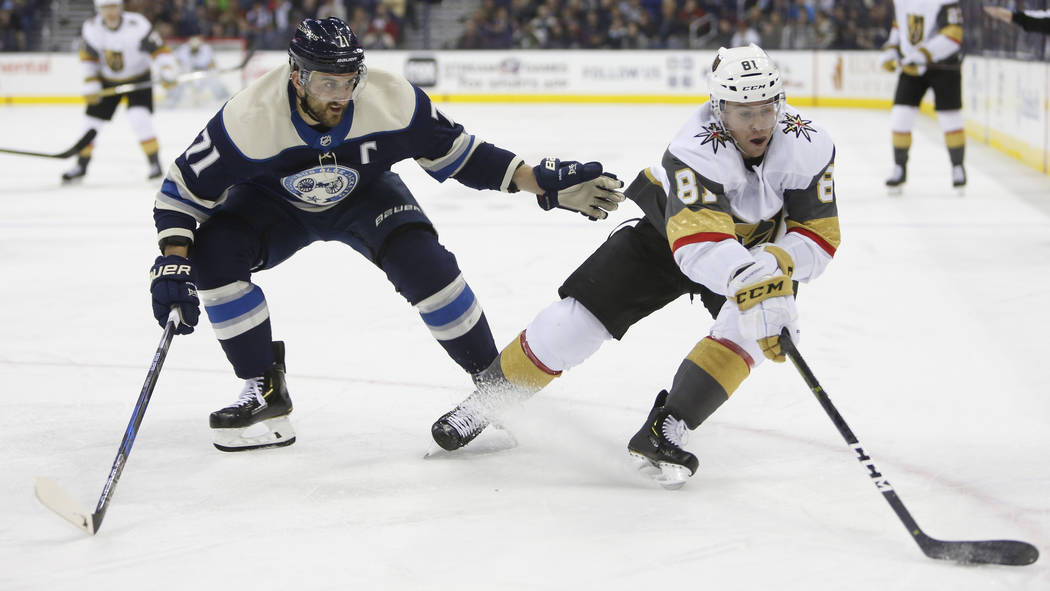 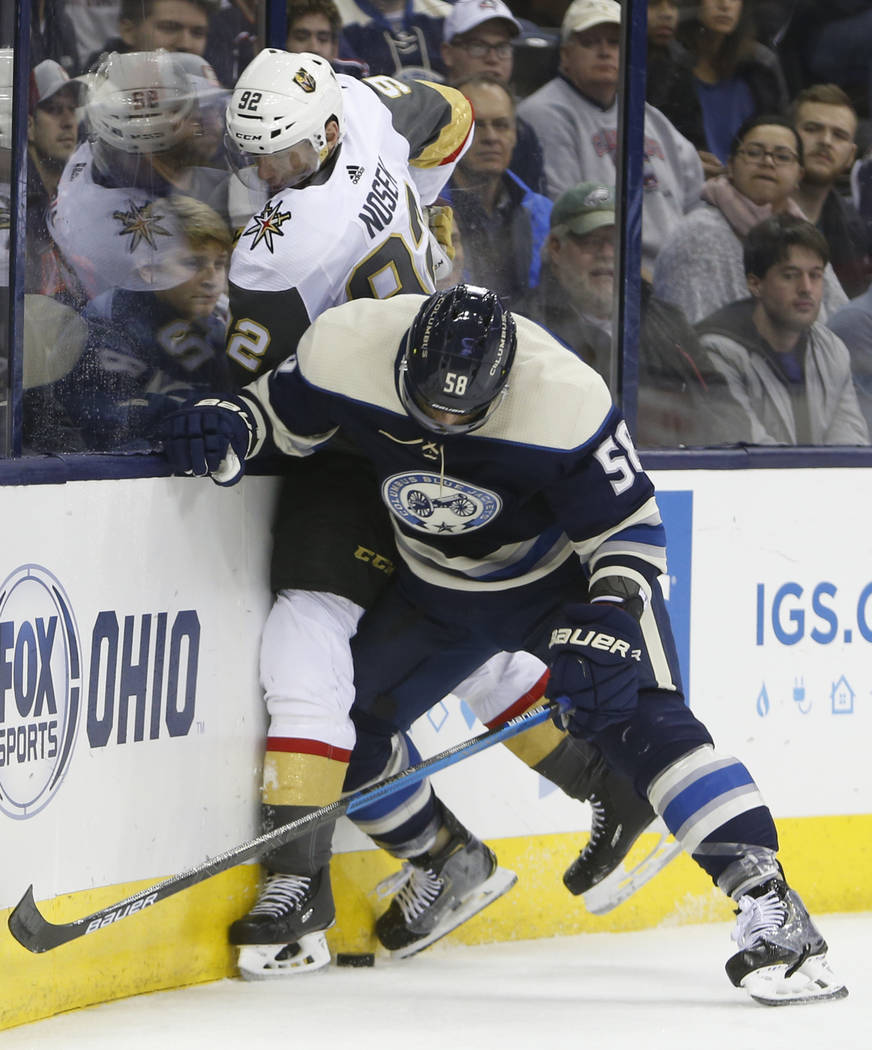 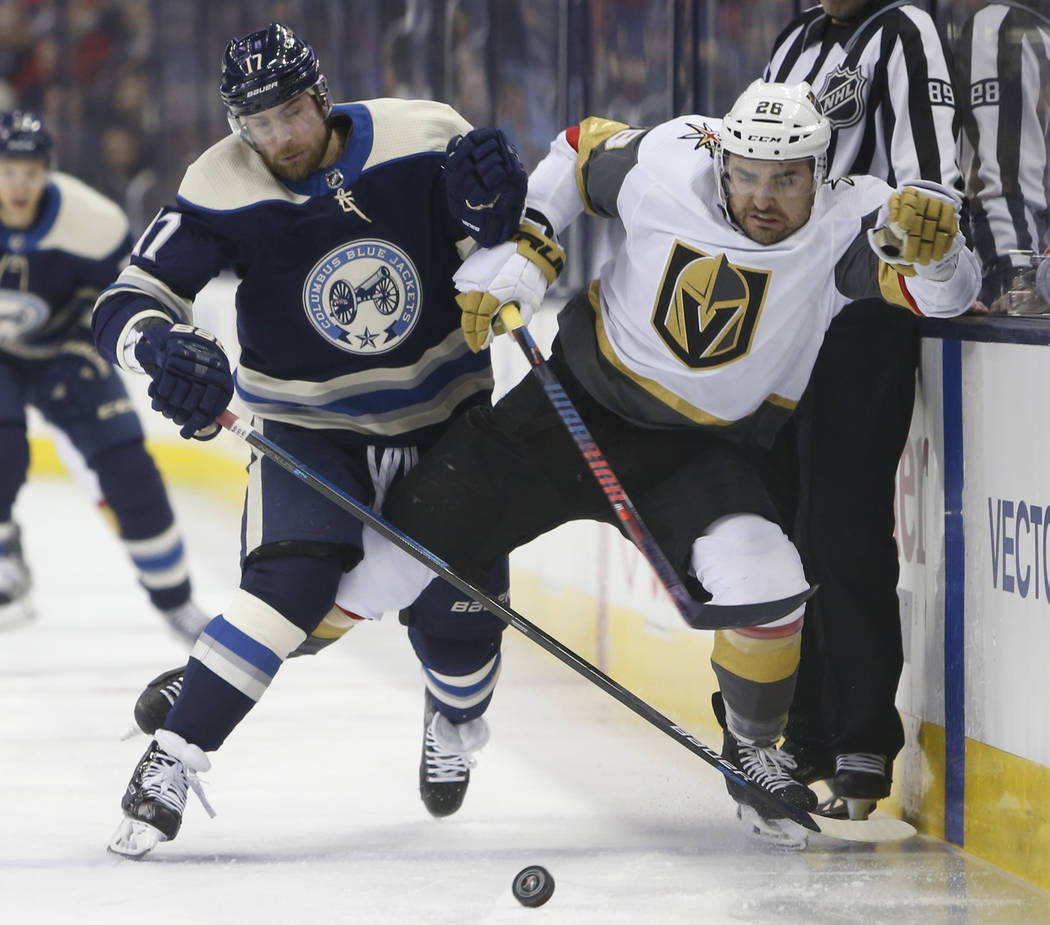 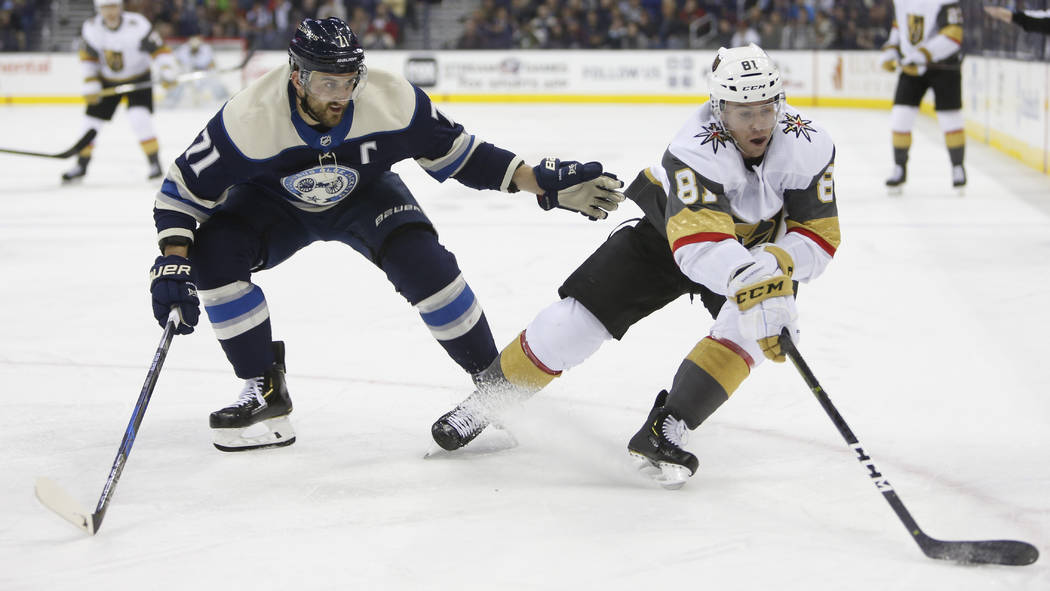 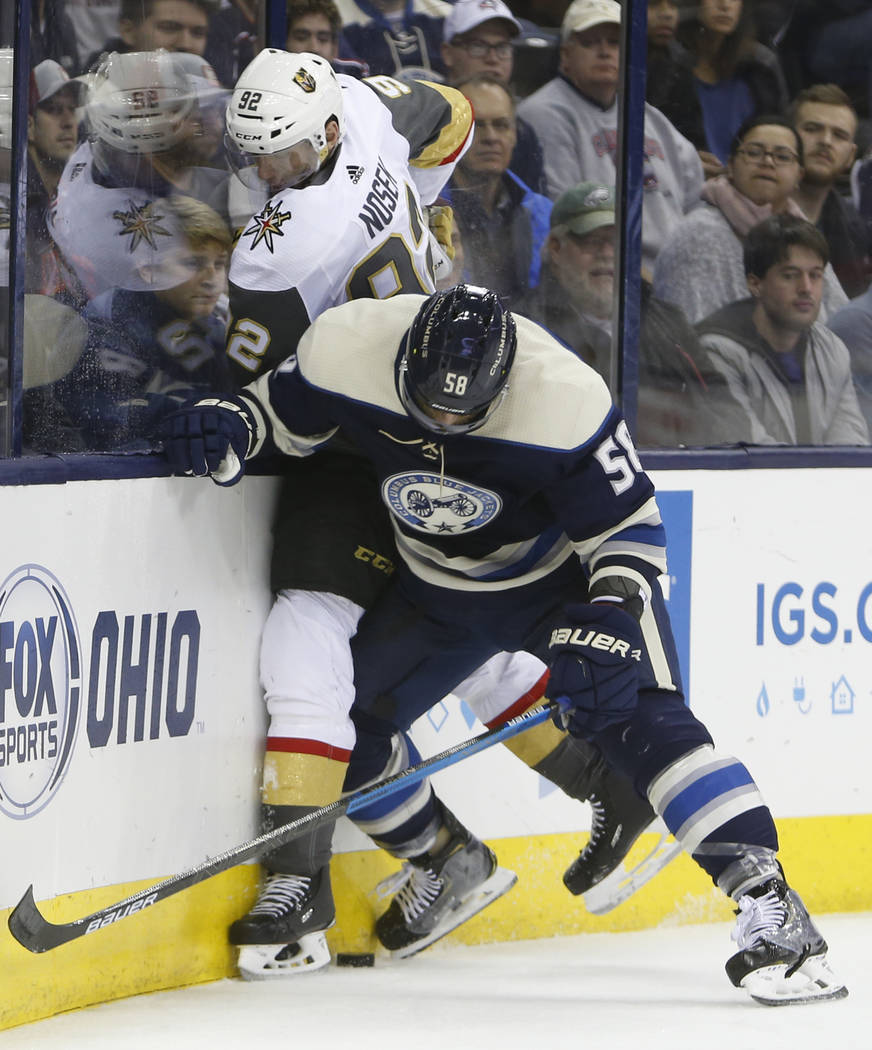 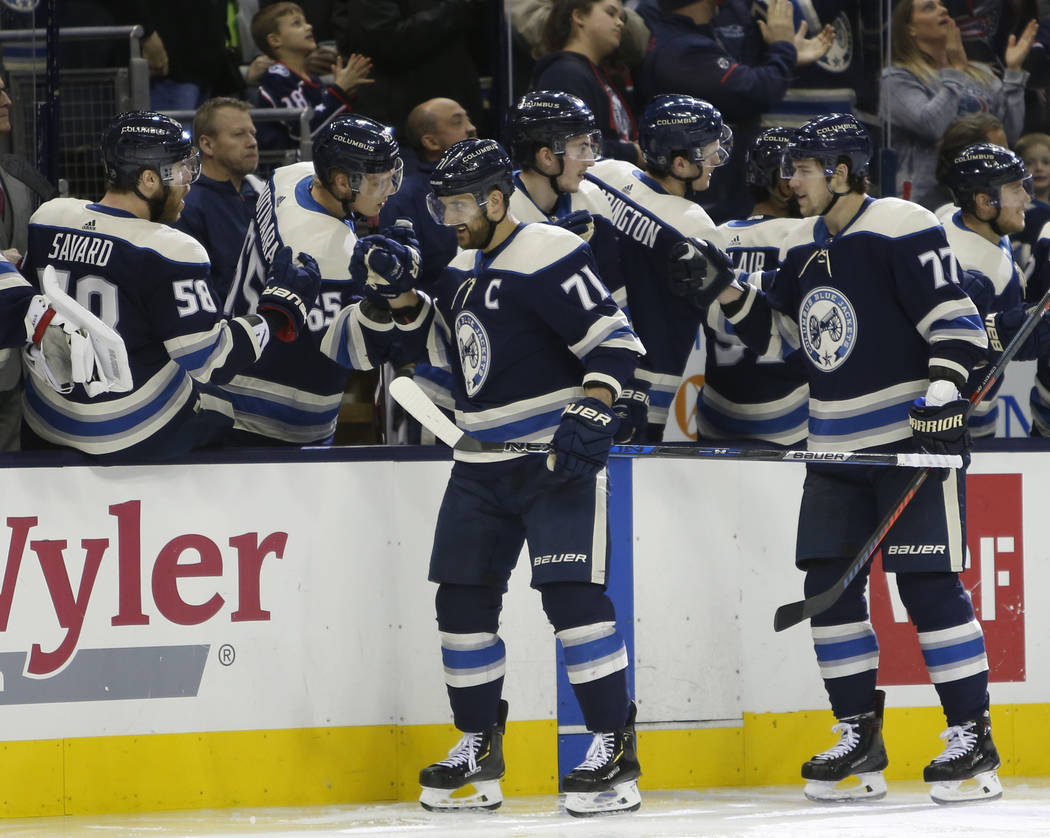 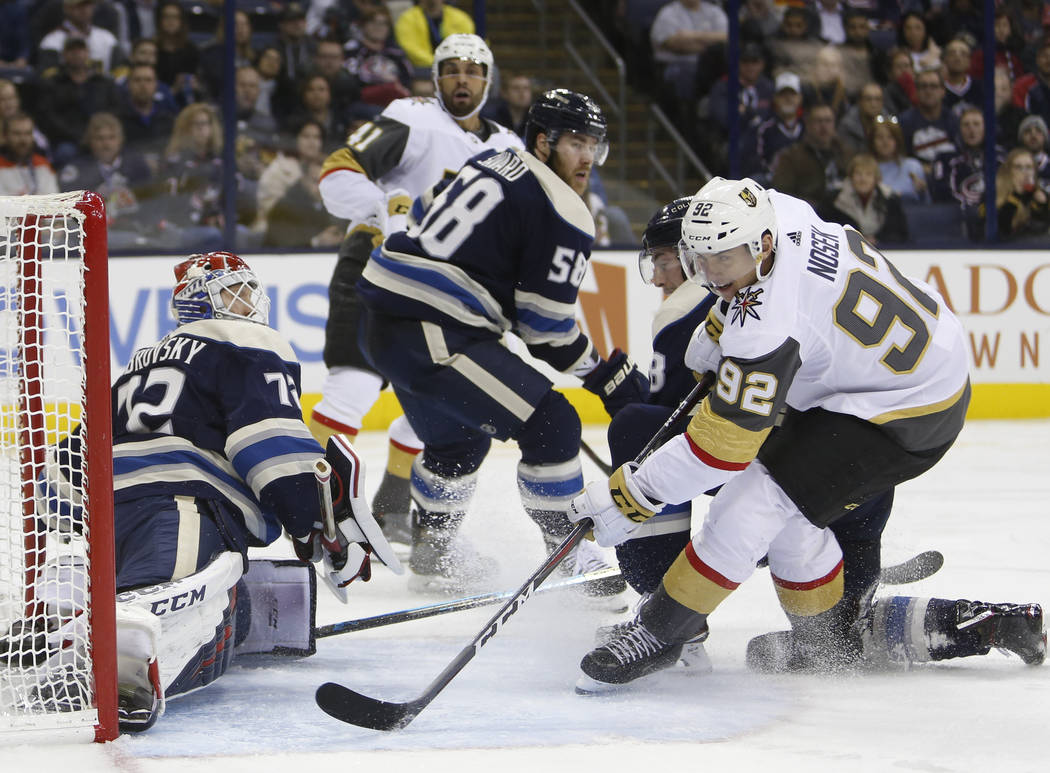 COLUMBUS, Ohio — Malcolm Subban didn’t show any signs of ring rust Monday during his first appearance in almost a month.

But, in what’s becoming a recurring theme, the Golden Knights’ backup goaltender didn’t get much support from his offense.

Subban flashed the form he showed during his promising rookie season with 30 saves, but he couldn’t outduel Columbus’ Sergei Bobrovsky in a 1-0 defeat at Nationwide Arena.

“He was real good, and it’s good for him,” coach Gerard Gallant said. “It’s too bad we didn’t get any points out of here tonight because (Subban) played a great game, and it’s unfortunate to lose 1-0. We just can’t seem to score when he’s in the net. That’s too bad, because he was outstanding for us.”

The Knights, who finished their road trip 2-1-1, played the second half of the game without left wing Max Pacioretty.

Pacioretty was involved in a knee-on-knee collision with Columbus’ Oliver Bjorkstrand with 9:50 remaining in the second period, and replays showed Pacioretty’s left leg took the brunt of the impact.

Defenseman Colin Miller also missed the final six minutes of the second period before he returned with a little more than 13 minutes remaining.

Subban, who remained winless at 0-5, made his first appearance since allowing seven goals in a loss at Calgary on Nov. 19.

He had a handful of key stops in the opening two periods, including a lunging right-pad save to deny Columbus’ Anthony Duclair on a breakaway midway through the first.

Subban also had some help from the post when Columbus defenseman Seth Jones struck the iron with 8:35 remaining in the second.

“I thought I got a little deep sometimes when they walked out a little bit,” Subban said. “I made a couple saves early and gave me some confidence the rest of the game.

“I’ve just got to keep carrying with that and keep improving every day. I wasn’t perfect, so we’re definitely going to look at video and correct some stuff. But ultimately, yeah, definitely some positives.”

The Blue Jackets broke the tie 40 seconds into the third period when Subban couldn’t control the rebound on Jones’ long wrist shot from the right point.

Nick Foligno, playing in his 800th career NHL game, eluded Jonathan Marchessault in front and banged in his eighth goal.

“They got a lucky bounce, and just mentally you’ve got to be ready to start the third period,” Subban said. “It’s a tough way to lose on one goal. In those types of games, you’ve got to make sure you’re mentally dialed in for the full 60 minutes.”

Bobrovsky had 14 of his 28 saves in the third period for his first shutout, but he was rarely challenged in the opening two periods.

In Subban’s five starts, the Knights have produced a total of six goals.

“We didn’t score any goals and that doesn’t happen a lot for our group,” Marchessault said. “I think we need to give credit to the other team. They played well and also for my part, I lose my guy in front of the net, and that’s how they score. … It’s unfortunate we weren’t able to get the win for (Subban).”

The Knights didn’t do much with a power play early in the third period, and Marchessault had the best chance at 9:15 of the third, but his low shot from the hashmarks was turned away.

“It’s too bad we couldn’t finish this road trip off on a better note, but guys played hard,” Gallant said. “They didn’t have a whole lot in the tank tonight, but they kept it a close game and had a chance.”