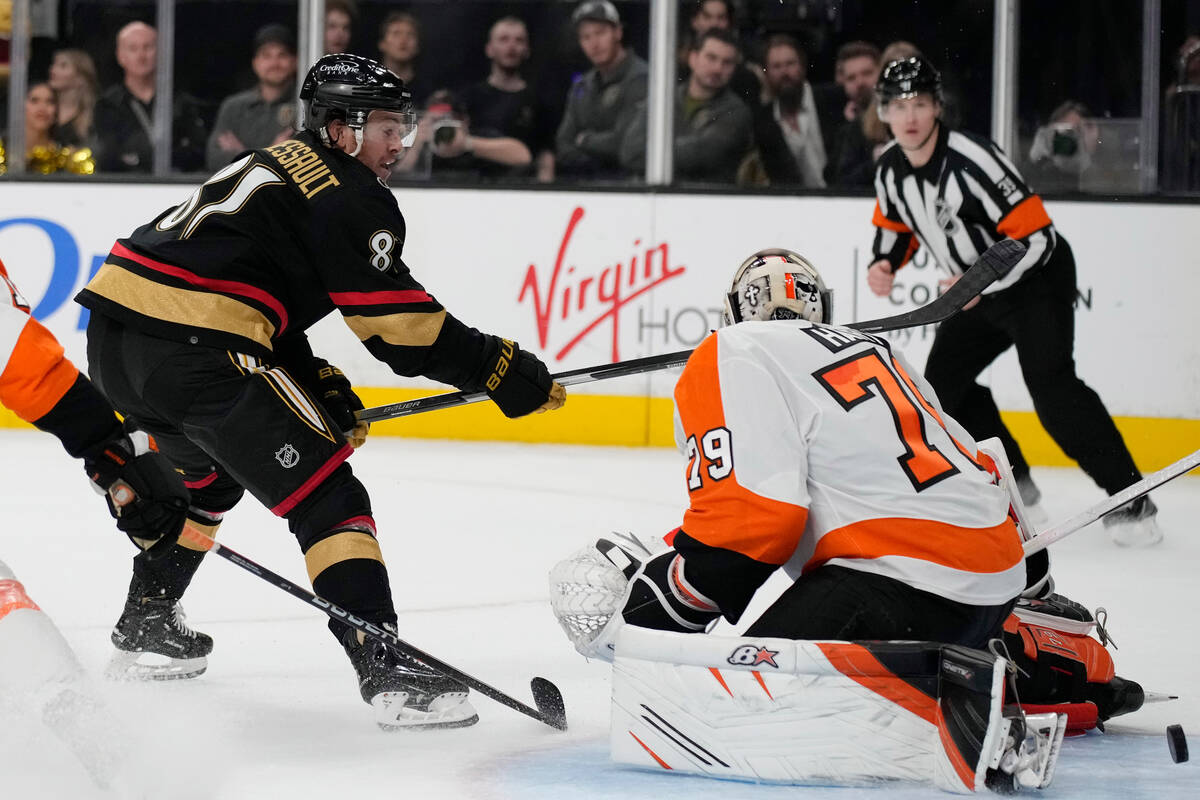 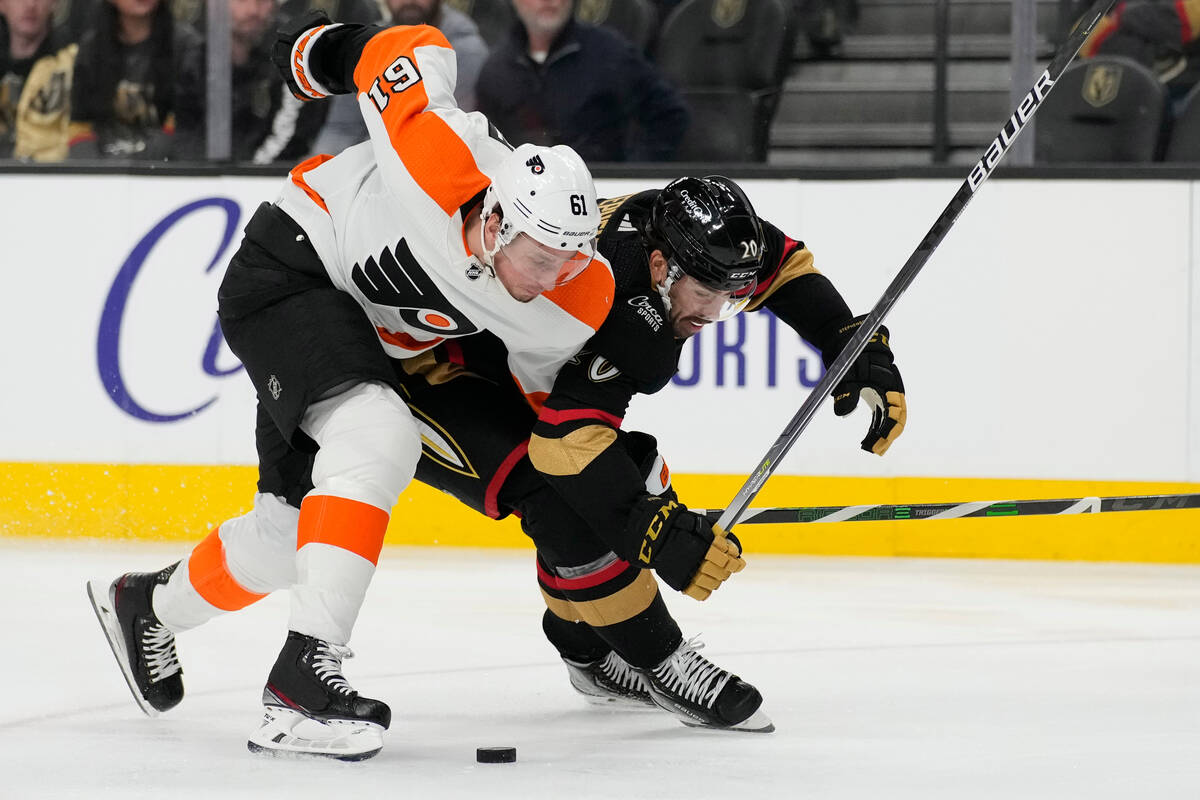 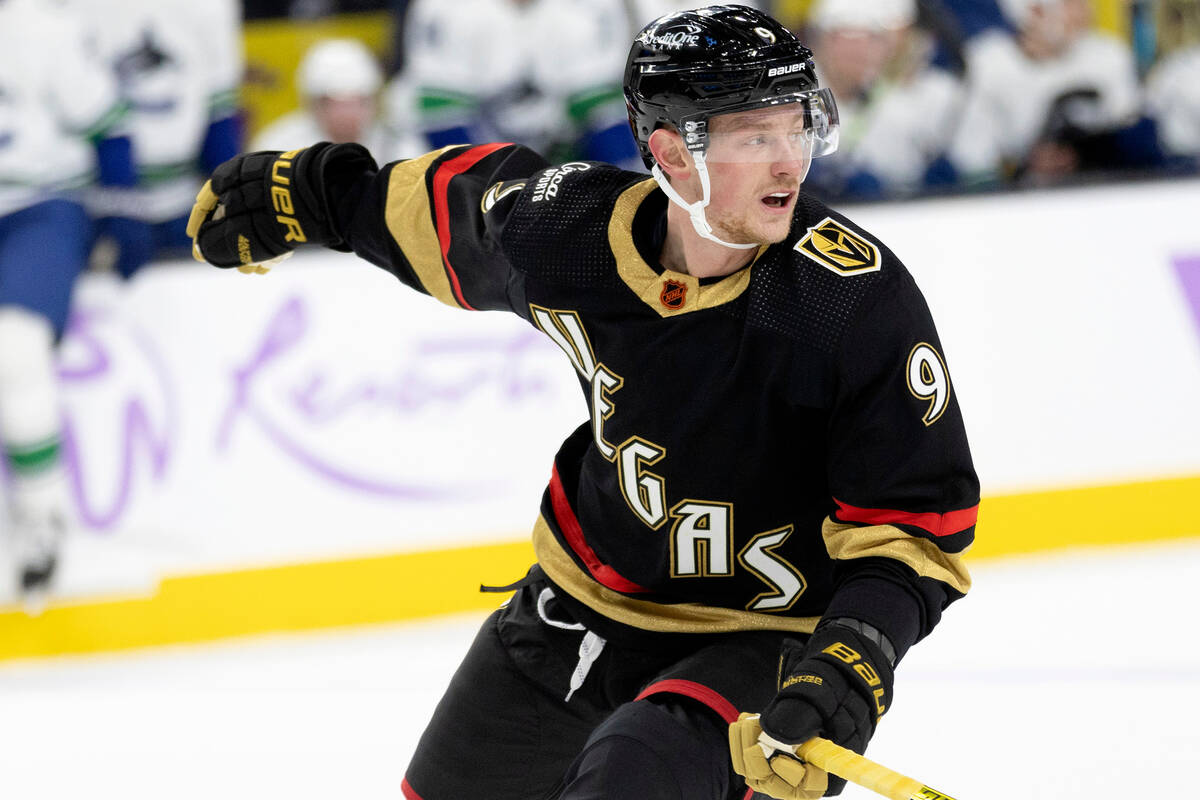 Golden Knights center Jack Eichel (9) pivots as the Vancouver Canucks skate up the ice with the puck during the first period of an NHL game at T-Mobile Arena on Saturday, Nov. 26, 2022, in Las Vegas. (Ellen Schmidt/Las Vegas Review-Journal) @ellenschmidttt 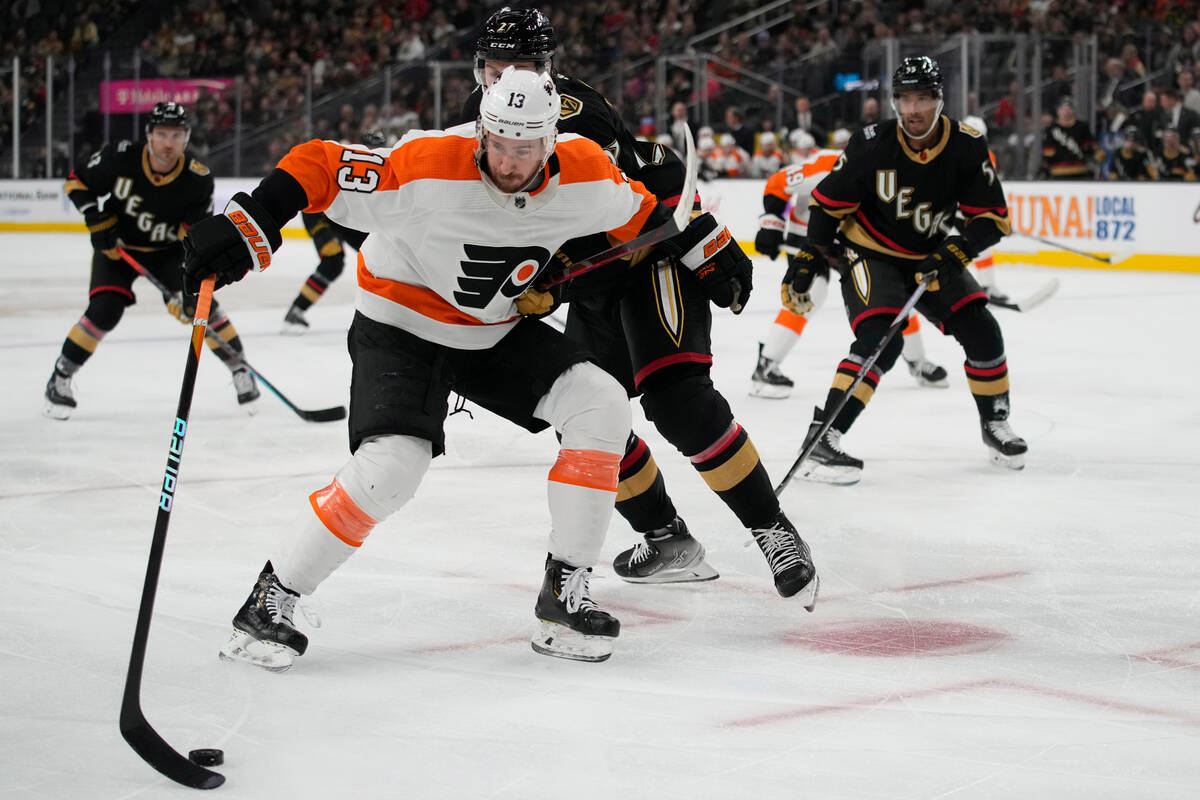 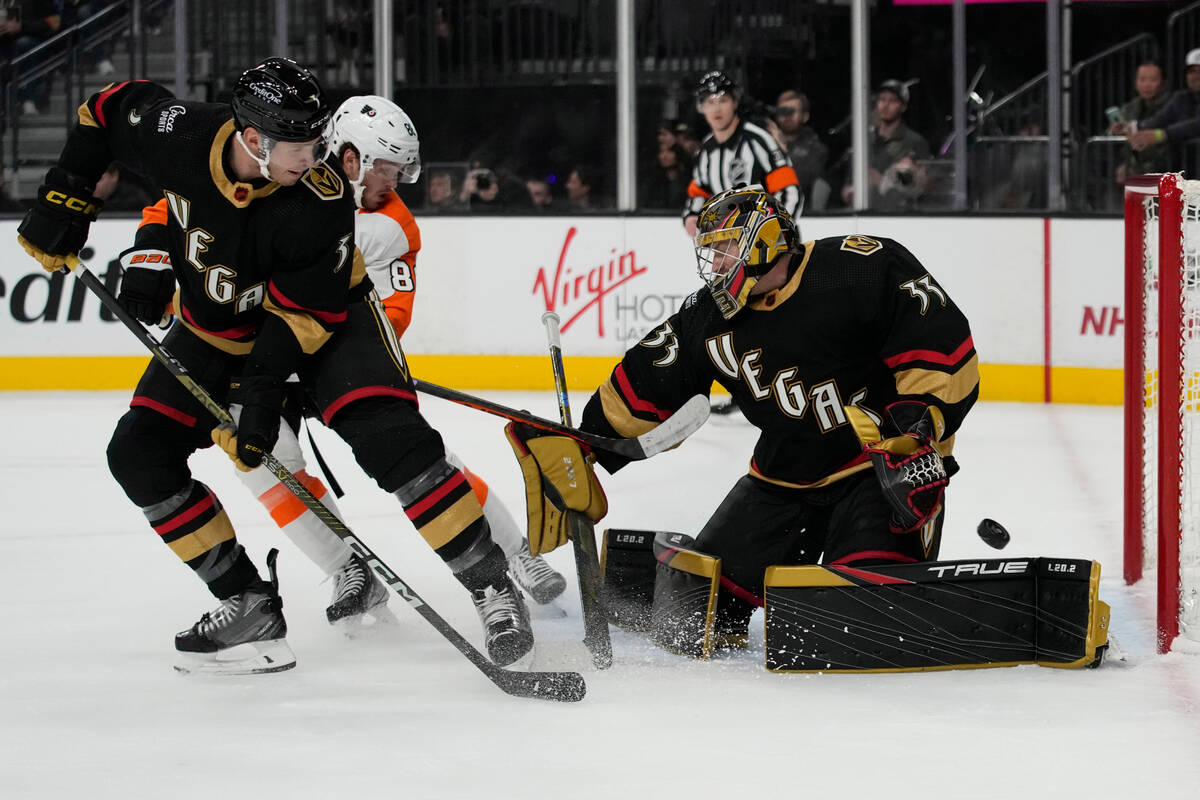 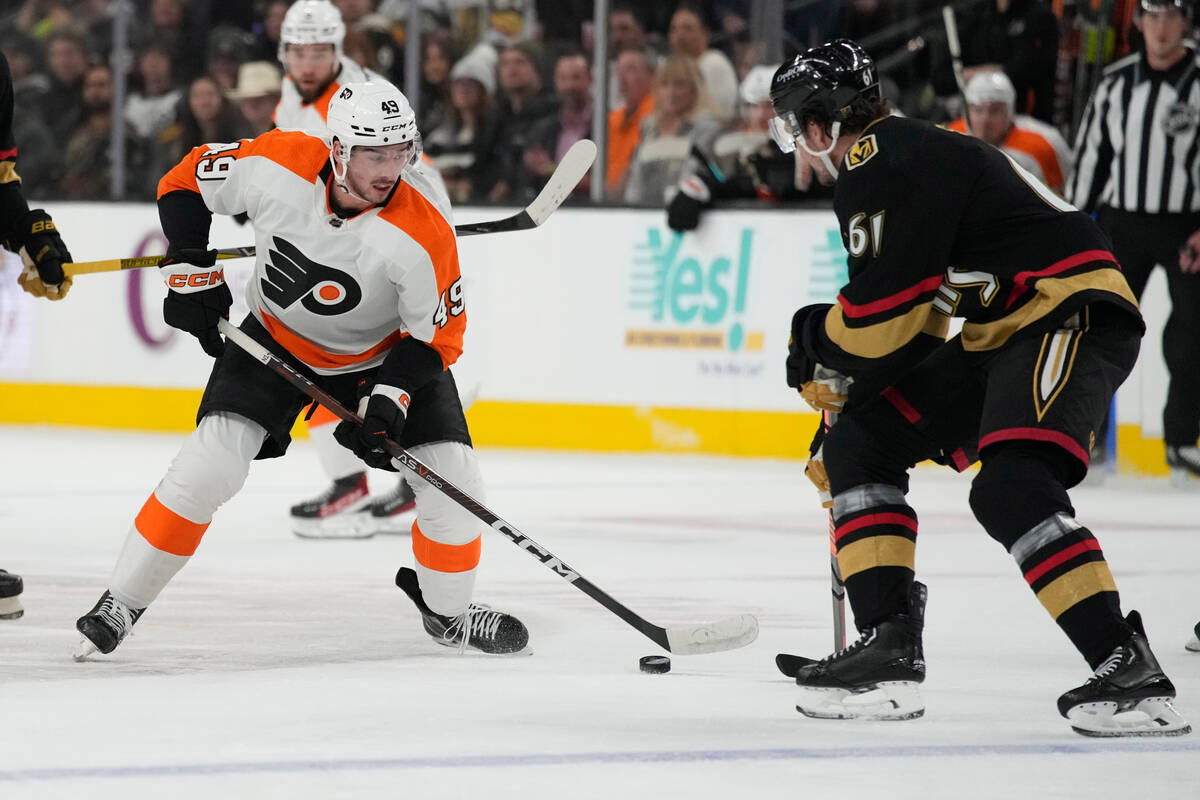 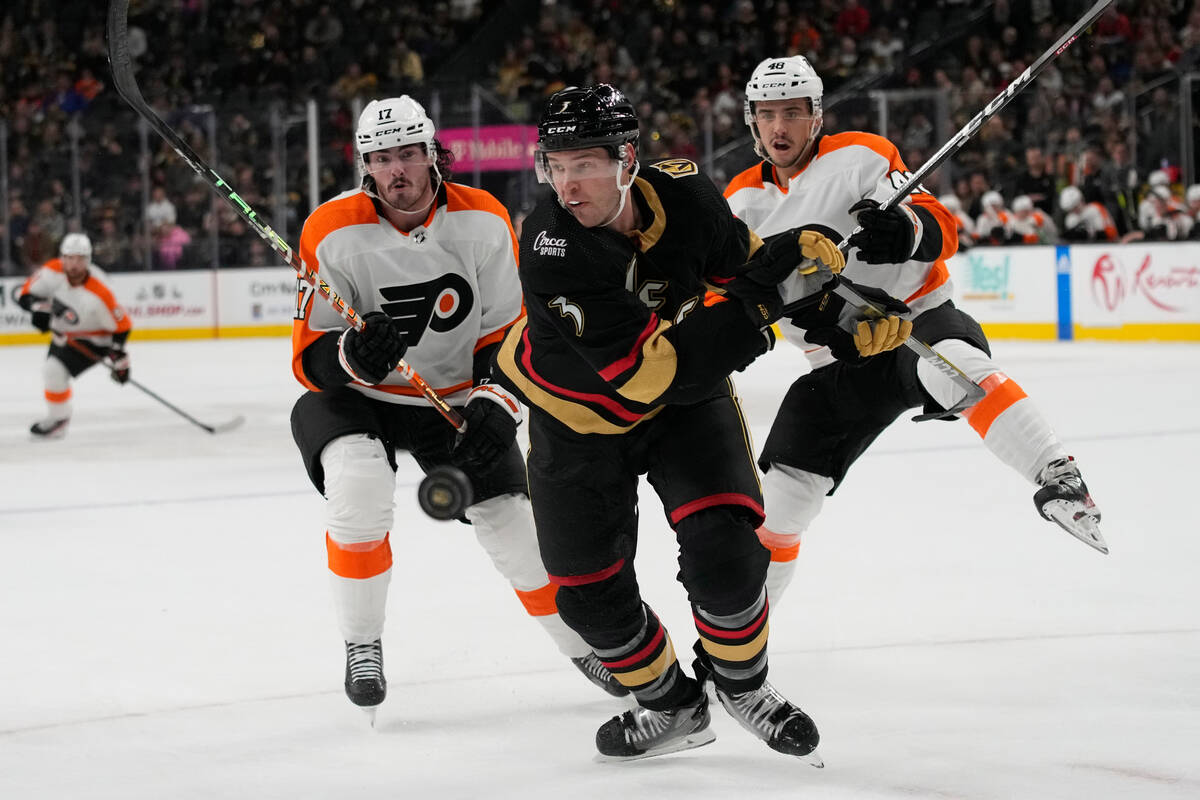 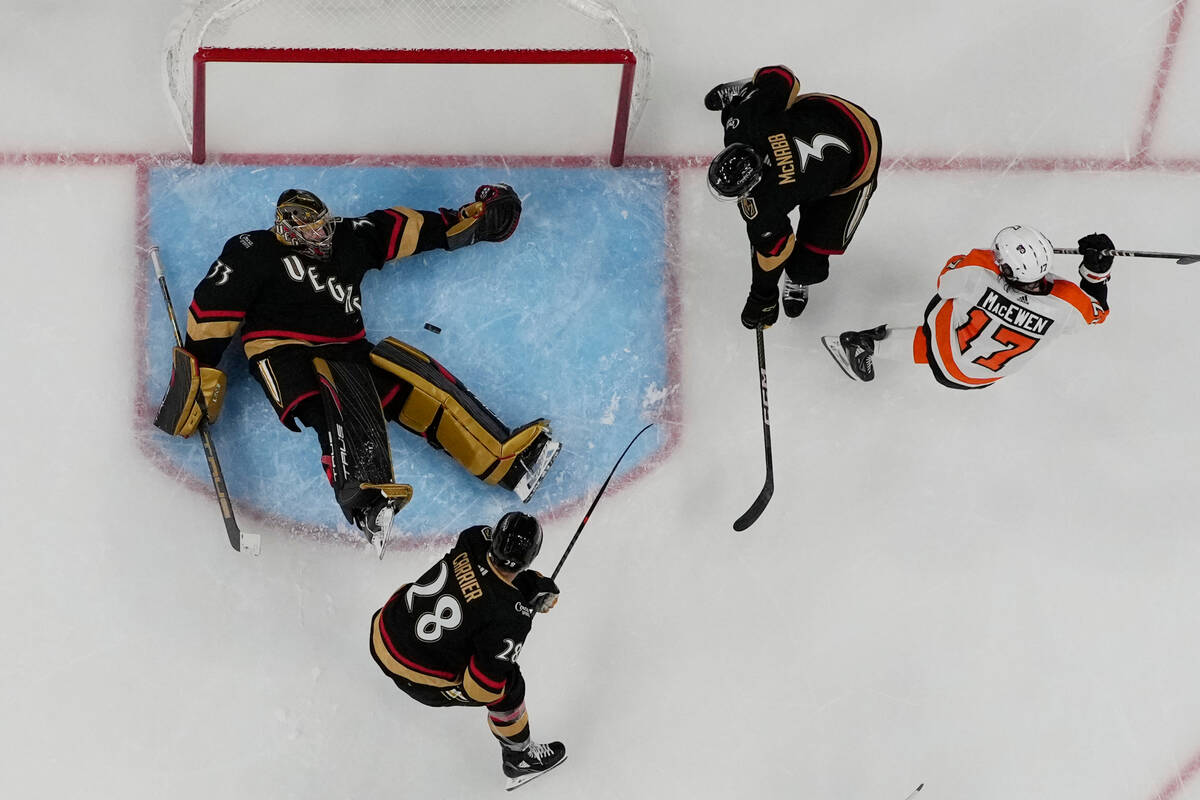 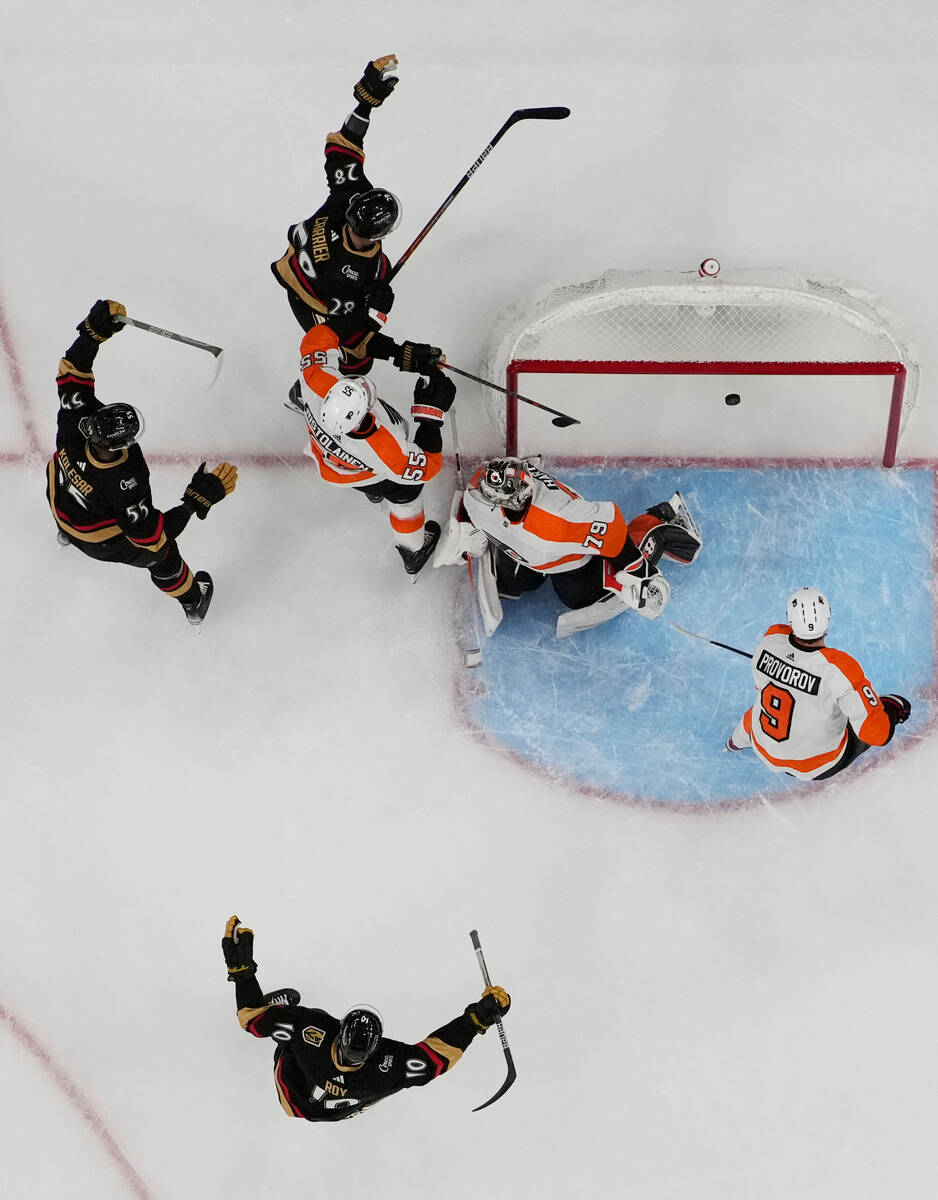 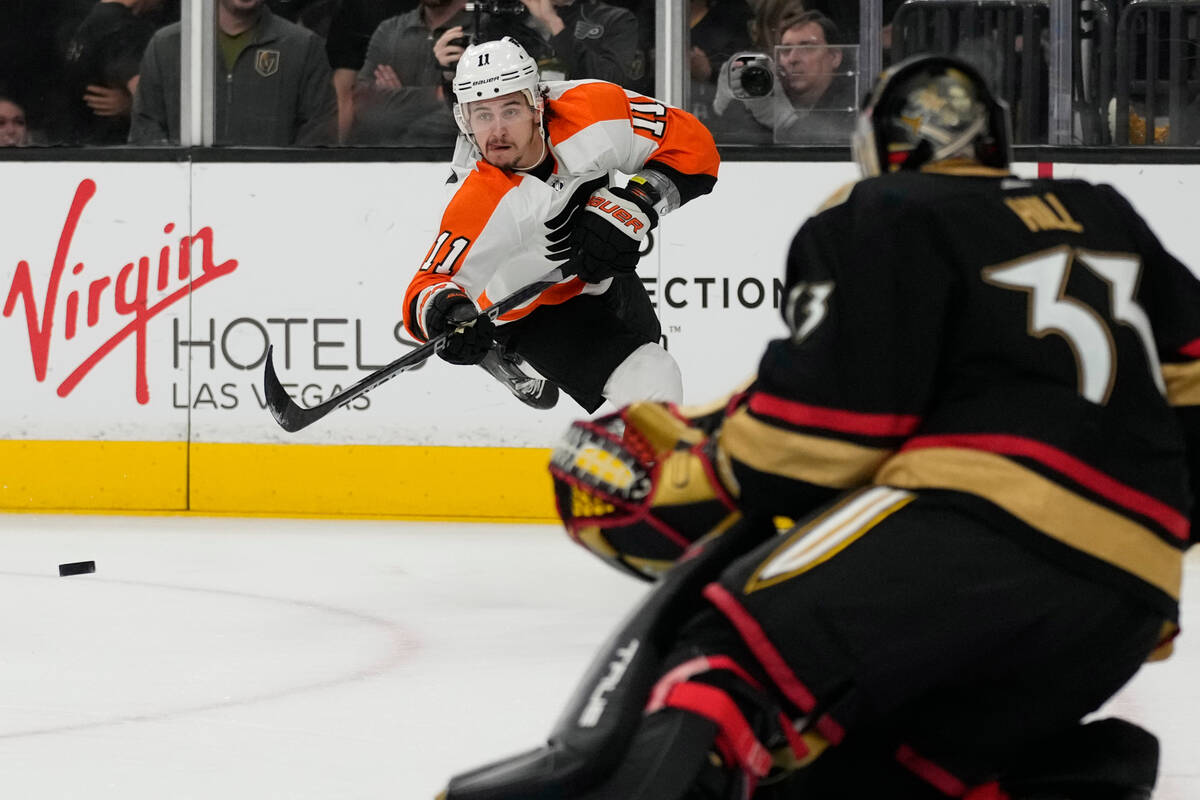 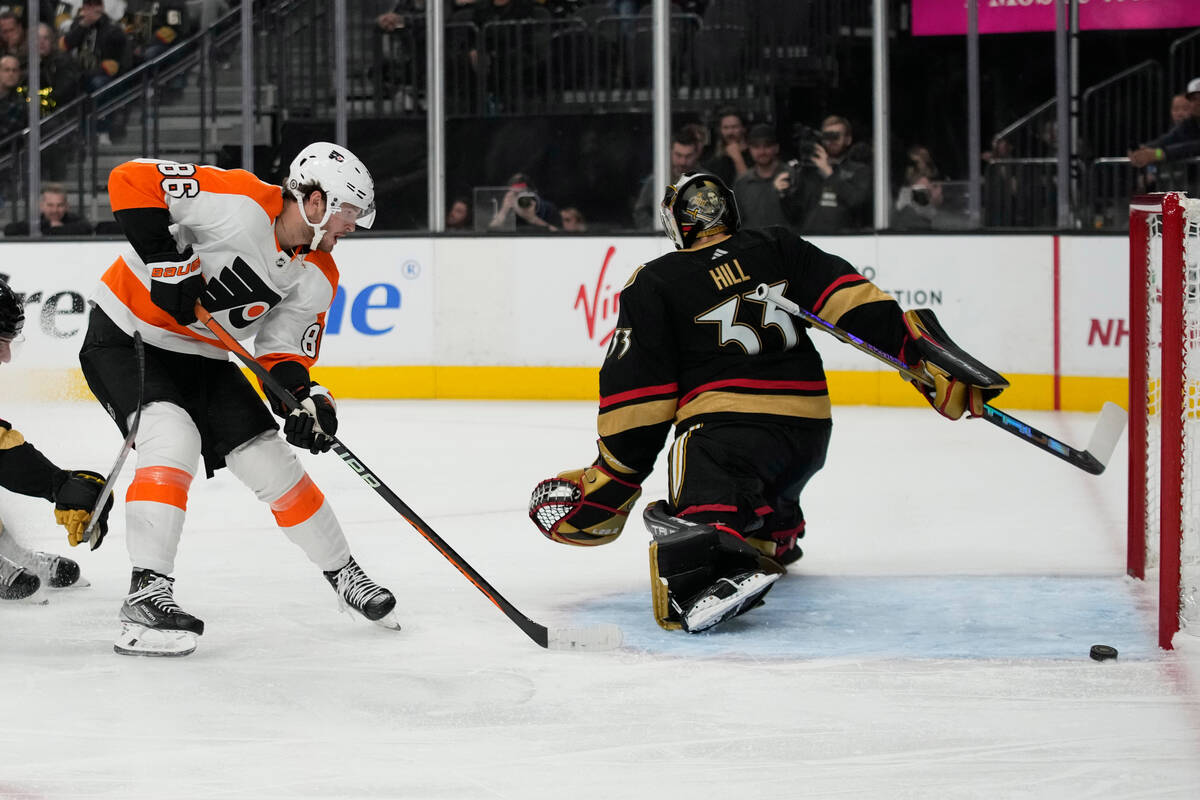 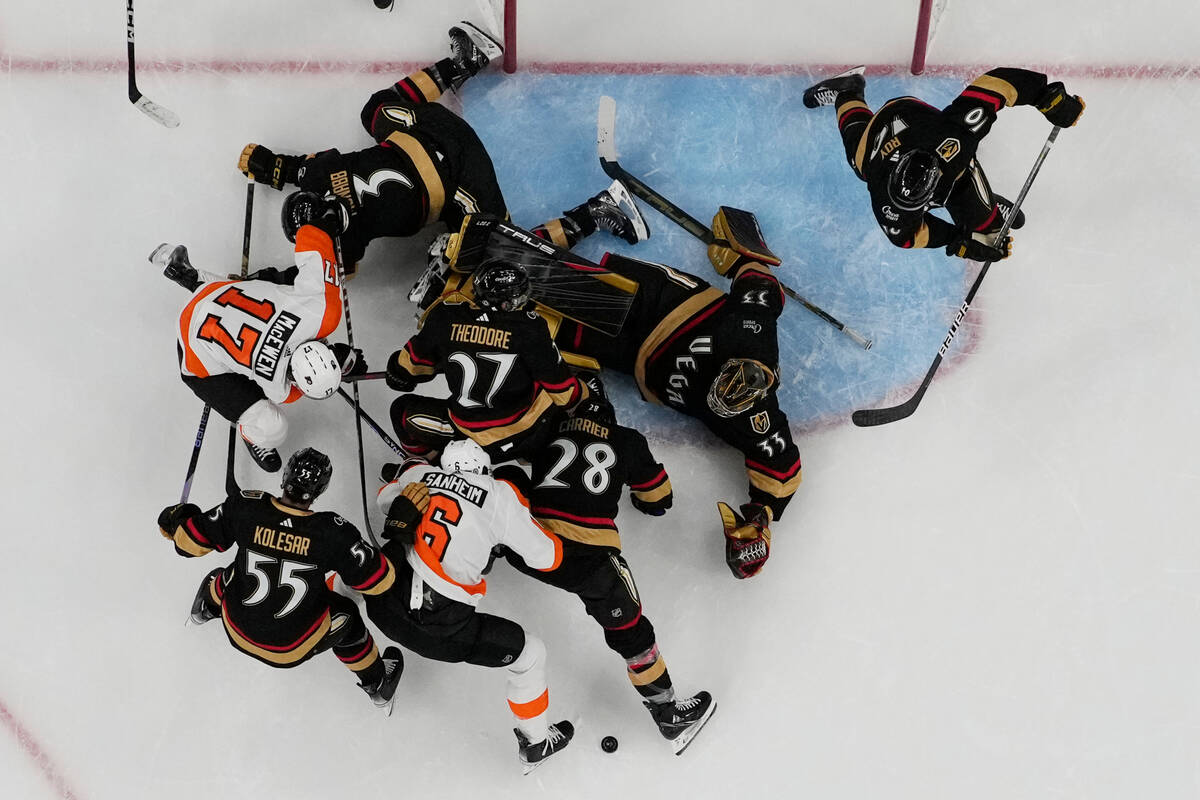 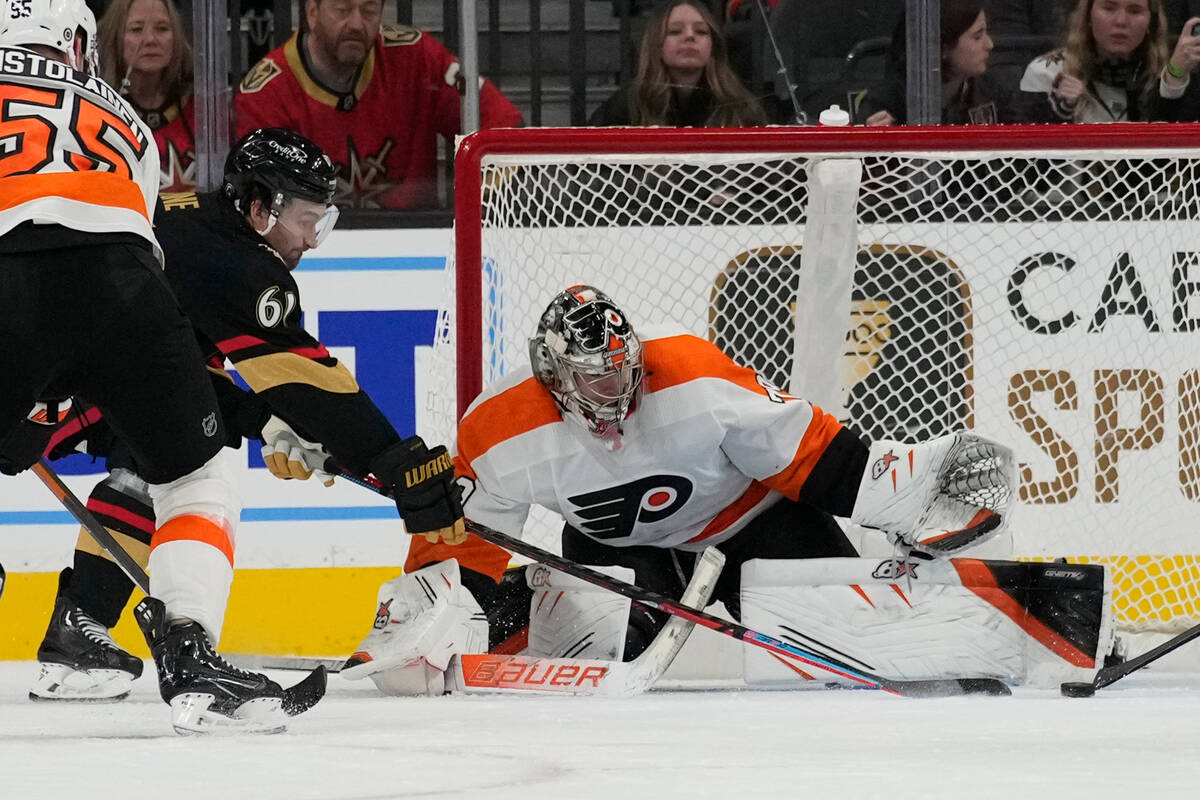 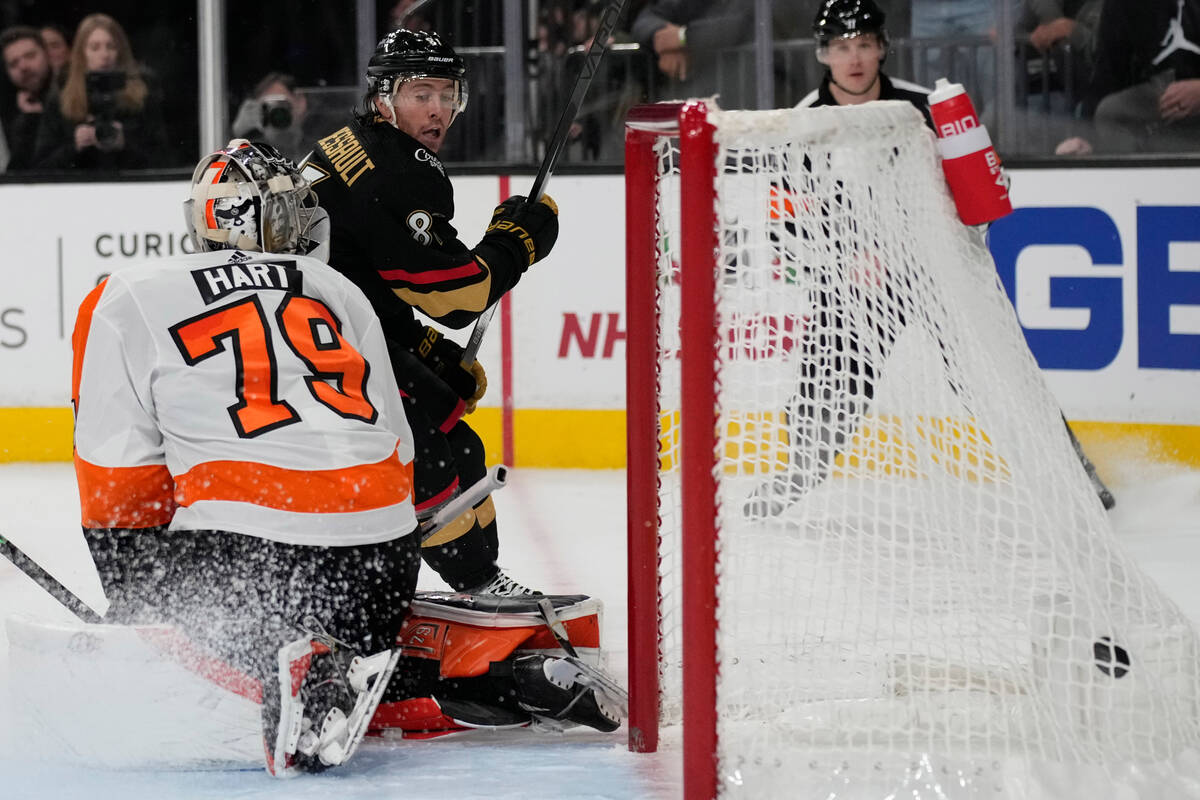 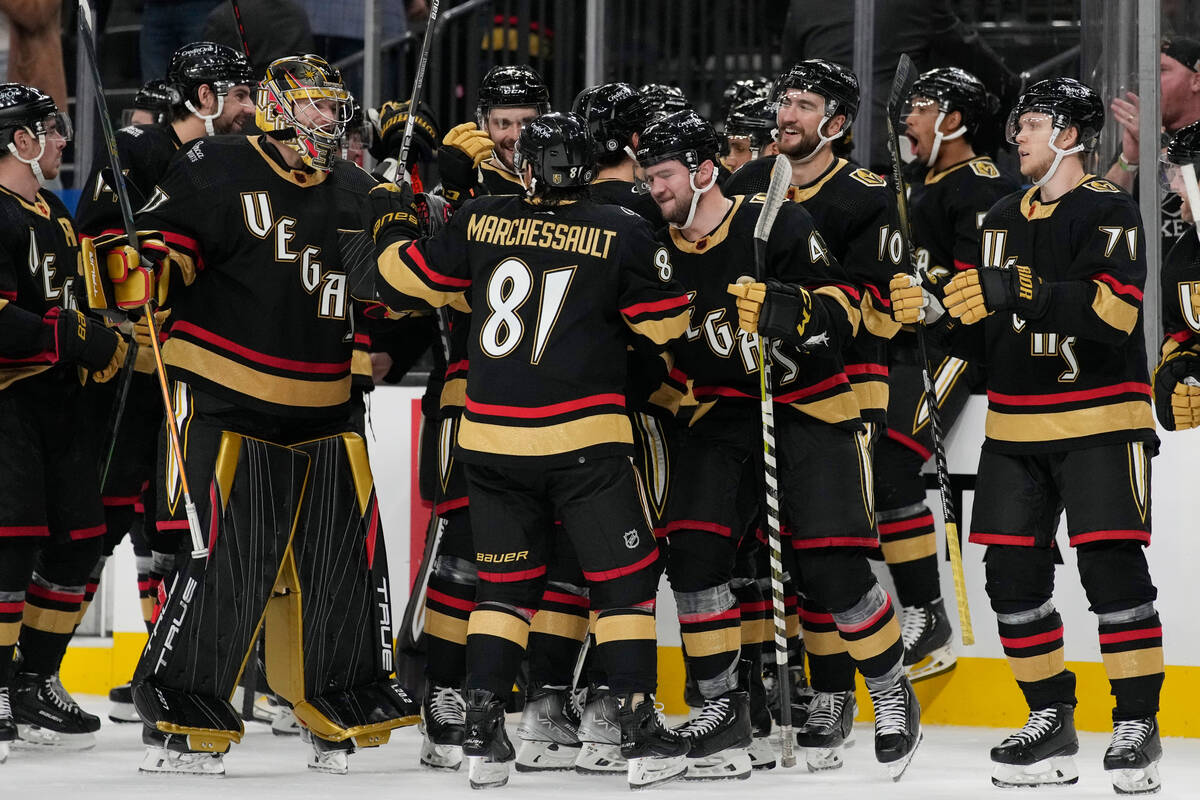 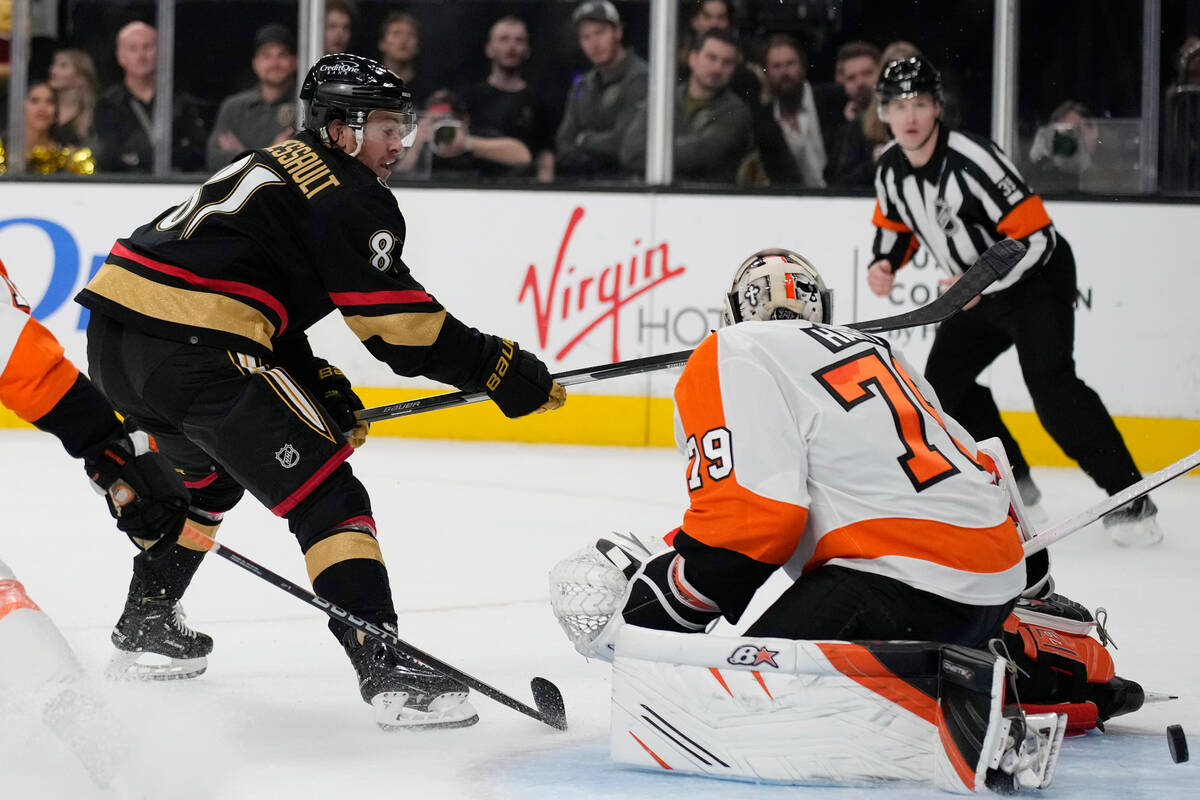 Bruce Cassidy didn’t know if Jonathan Marchessault had it in him.

The Golden Knights right wing intercepted a pass in his own zone with 1:45 remaining in overtime. He had a chance to break the other way. But his own coach “wasn’t sure he was going to pull away at the end.”

Marchessault did anyway. He got in front of Flyers center Kevin Hayes and scored off a backhand move to give the Knights a 2-1 win Friday in front of an announced crowd of 17,767 at T-Mobile Arena.

It was Marchessault’s seventh overtime goal, tied for the most in team history. It also extended his goal streak to a career-high four games.

“He had an extra gear in him there, huh?” left wing William Carrier said. “I didn’t know he had that speed.”

Marchessault’s goal wrapped up a win that wasn’t pretty for the Knights (20-8-1), but snapped their three-game home losing streak.

The Flyers (9-13-6) aren’t the NHL’s most talented team. They rank last in goals per game under first-year coach John Tortorella. But they’re well-structured and they compete.

Philadelphia limited the Knights to six high-danger scoring chances at five-on-five, according to the website Natural Stat Trick. That’s tied for the team’s sixth-lowest total of the season.

Even when the Knights did get good looks, goaltender Carter Hart responded with some spectacular stops as part of a 32-save performance.

The Knights still took a 1-0 lead with 8:15 left in the first period. Hart couldn’t control a rebound, and Carrier chipped the puck into the net. The goal was the fourth-line grinder’s ninth, tying his career high.

The Flyers tied the game 1:47 into the second period after center Scott Laughton took advantage of a turnover by goaltender Adin Hill.

The two teams couldn’t come up with another goal until Marchessault’s moment in overtime. The goal was his 12th, putting him in a tie for the second-most on the team with linemate Reilly Smith.

“We just had to find a way to win a hockey game, and I think that’s what we did,” Marchessault said. “Obviously, it wasn’t the prettiest 60 minutes, but good teams find a way and sometimes you get lucky breaks like that.”

Hill made 27 saves to improve to 2-0 in December, but he also had a costly error.

He went behind his net to gather a dump in early in the second period. Hill didn’t attempt to play the puck until three seconds after he gathered it, giving Laughton time to get in a passing lane below the goal line.

Laughton intercepted a pass and fired towards the crease as Hill scrambled to get back into the net. The puck deflected off Hill’s stick, left leg and in for Philadelphia’s only goal.

“I just kind of had to laugh it off,” Hill said. “You have to move on, right? Focus on the next play. It’s an unfortunate bounce. Obviously, I’m not happy with the play I made, but then getting my stick on it, hitting my skate, looking back and it’s in the net, it’s a pretty tough bounce.”

It wasn’t the only puck-handling mishap Hill has had this season. He also had a turnover that led to a game-tying goal for St. Louis center Ivan Barbashev during a 3-2 loss for the Knights on Nov. 12.

Eichel was back on the team’s top line Friday after missing the previous two games with a lower-body injury.

Eichel, still sporting a face shield after getting hit in the face with a Nic Hague slap shot Nov. 28 in Columbus, led all Knights forwards in ice time (20:15) against the Flyers.

“I think it’s (an injury) he’ll just have to play through a little bit,” Cassidy said. “We’ll see where he’s at tomorrow, but it might also be one that needs a little more time to heal.”

Knights defenseman Shea Theodore had to be helped off the ice 2:11 into overtime after a collision with Flyers defenseman Travis Sanheim.

Cassidy said Theodore was “feeling better than what it looked like.” The 27-year-old is tied for second on the Knights in scoring with 22 points in 29 games.

“I can’t tell you how it’s going to feel tomorrow morning, but right now that’s a positive,” Cassidy said.