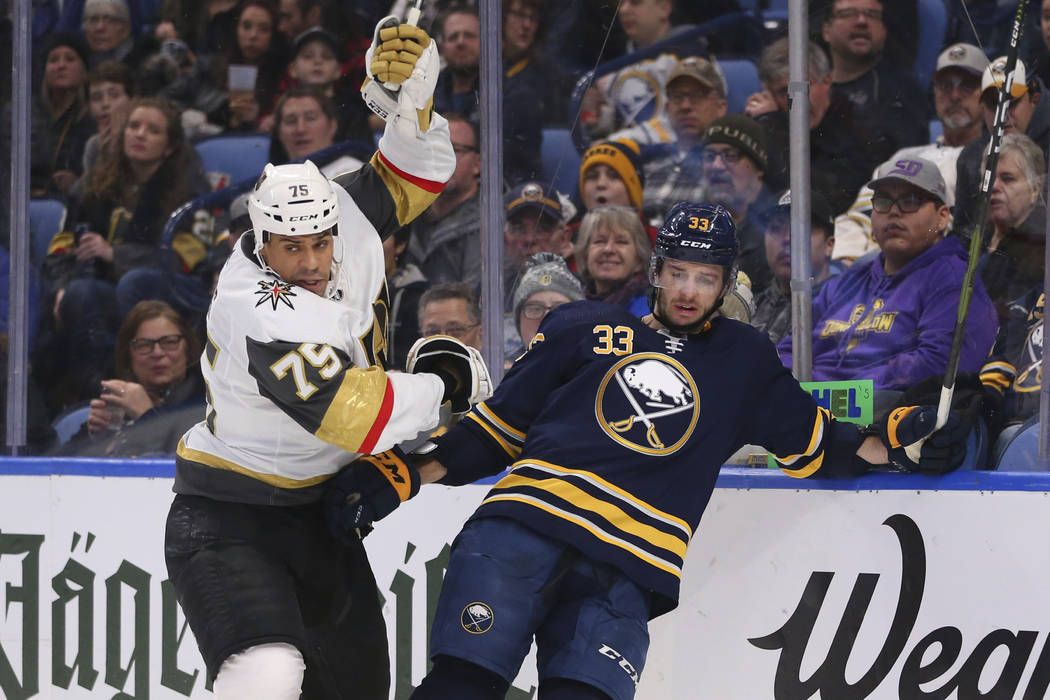 BUFFALO, N.Y. — When Colin Miller was acquired from the Golden Knights in late June, he was expected to provide a boost to Buffalo’s blue line.

But more than halfway through the season, the defenseman has yet to settle into a role with his new team.

“I think I’m probably still trying to find it here, because it’s kind of been in and out and some different players,” Miller said Tuesday. “But I think a lot of guys could say that on the back end.”

Miller was dealt to the Sabres for two draft picks last summer as part of the Knights’ cost-cutting measures.

After a bright start with Buffalo, the 27-year-old often has been the odd-man out with the Sabres carrying eight defensemen the majority of the season.

Miller sat out the previous two games before returning to the lineup Tuesday against his former club. He’s been scratched 14 times in 47 games, more than any other Sabres defenseman.

“It’s just part of it, I guess,” Miller said. “You’ve got to be prepared to play when you’re called upon and work hard when you’re not.”

Miller led Knights defensemen in scoring during the team’s inaugural season with 10 goals and 41 points and was rewarded with a four-year, $15.5 million contract.

He slipped to three goals and 26 points in 65 games last season and fell out of favor with Knights coach Gerard Gallant at times during the final two months. Miller was a healthy scratch for Game 1 of the Western Conference quarterfinals.

In Buffalo, Miller hasn’t found his offense, either. He produced three assists in the first four games and has one goal and two assists since.

Miller went 15 games from Oct. 19 to Dec. 5 without a point and was held off the scoresheet in six straight games entering Tuesday’s play.

“He has an ability to add an offensive punch, which we believe is still going to evolve here with us,” Sabres coach Ralph Krueger said. “I’m sure his offense will bloom as he continues to learn to be that player we need without the puck, and he’s working hard at it.”

The Knights missed left wing Jonathan Marchessault in the locker room and during games. His absence also was felt in warmups.

Marchessault, who returned to the lineup against Buffalo after sitting out the past five games, is in charge of retrieving and distributing pucks at the end of each warmup drill. Alex Tuch handled the duties the past three games and …

“I didn’t watch, but I heard he was not really good,” Marchessault needled. “It’s time for me to come back, I guess.”

Tuch was more than happy to hand the role back to Marchessault.

“I almost got hit in the head once, but it comes with the job, I guess,” Tuch said. “It’s easy. I think Marchy puts too much thought into it.”

The Knights will host a regional qualifier for the North America Scholastic Esports Federation’s 2020 Chel Invitational.

The tournament uses EA Sports’ NHL 20 on Xbox and PlayStation, with the winners of the scholastic and open divisions advancing to the finals Feb. 22 in Anaheim, California.

Tournament opt-in closes Jan. 31, and gamers can register at nhl.com/goldenknights/community/chel-invitational. 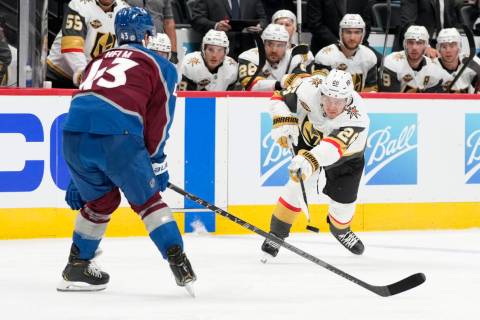 Chandler Stephenson and Reilly Smith scored in the first period, and the Golden Knights held on for a victory over the Colorado Avalanche on Tuesday at Ball Arena.