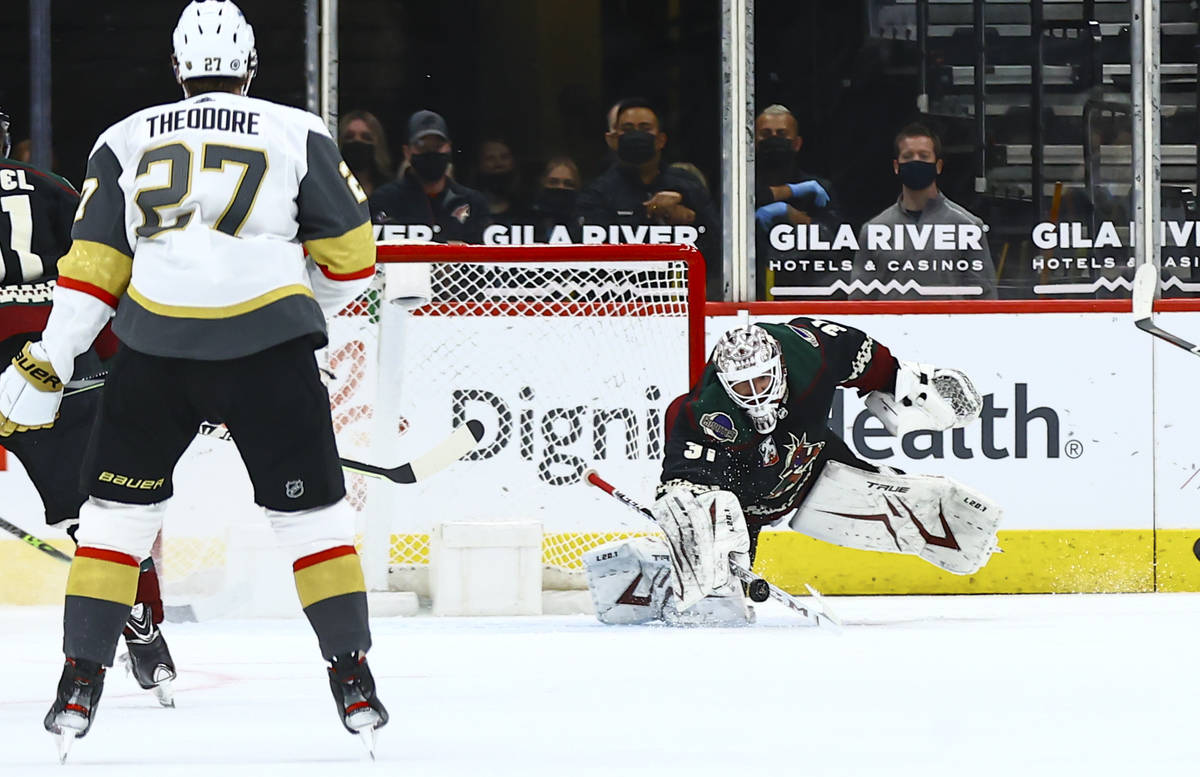 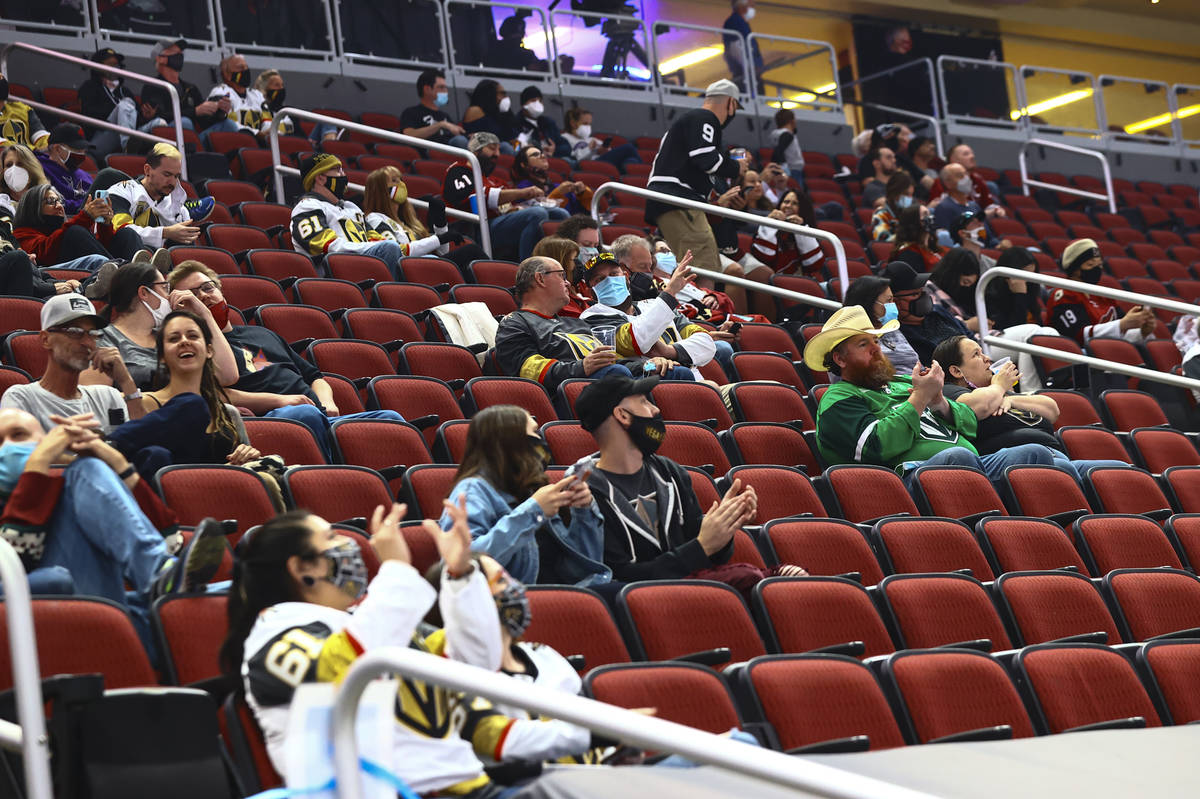 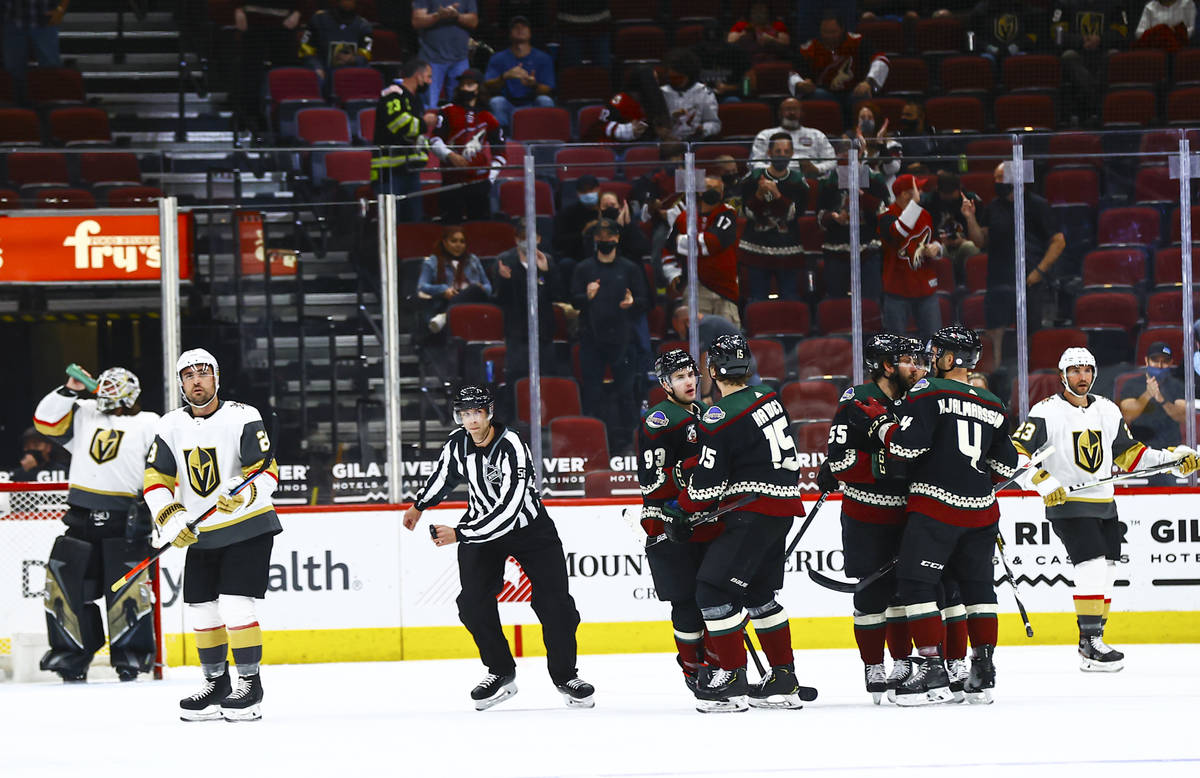 The Arizona Coyotes celebrate after scoring against the Golden Knights during the first period of an NHL hockey game at Gila River Arena in Glendale, Ariz., on Friday, April 30, 2021. (Chase Stevens/Las Vegas Review-Journal) @csstevensphoto 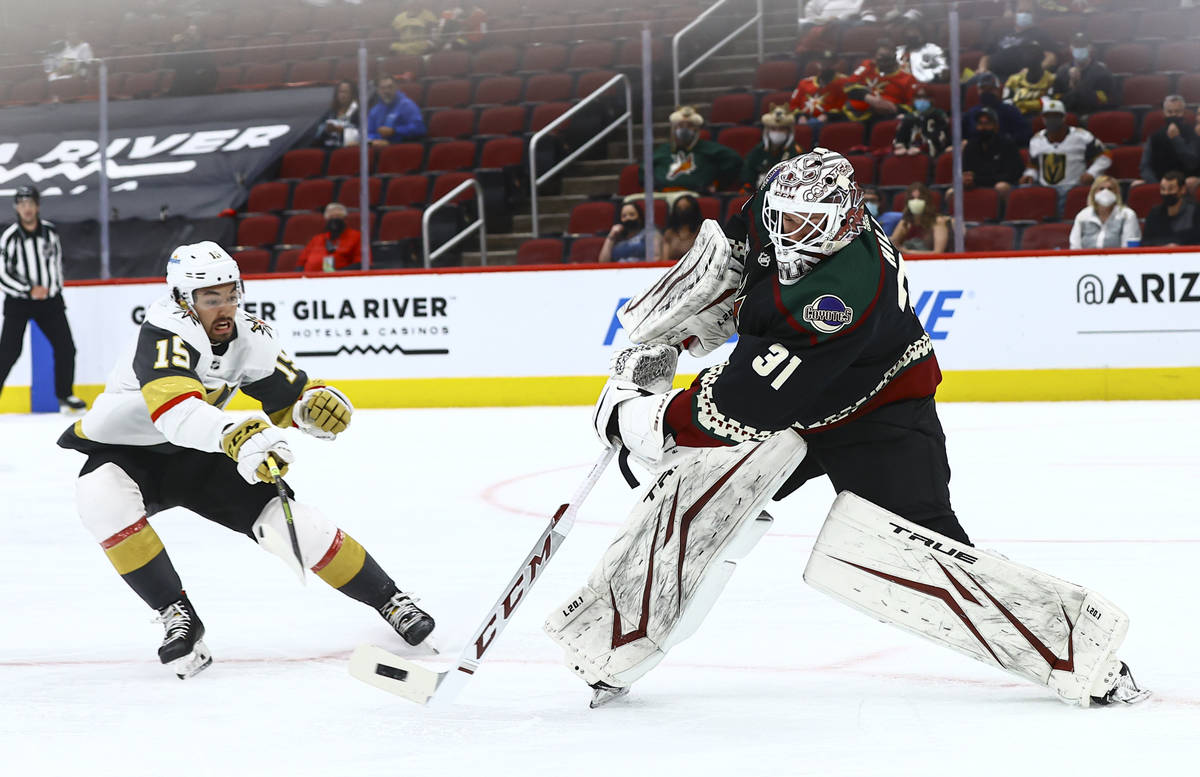 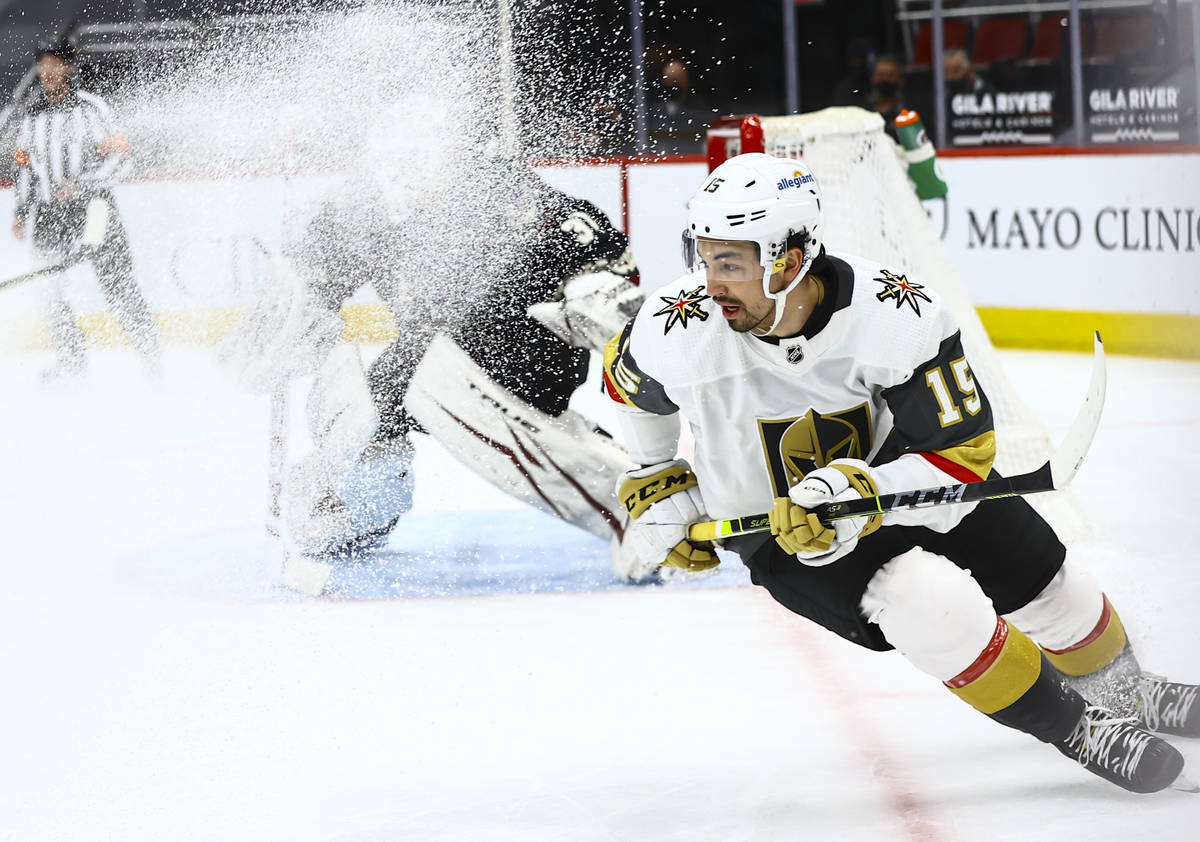 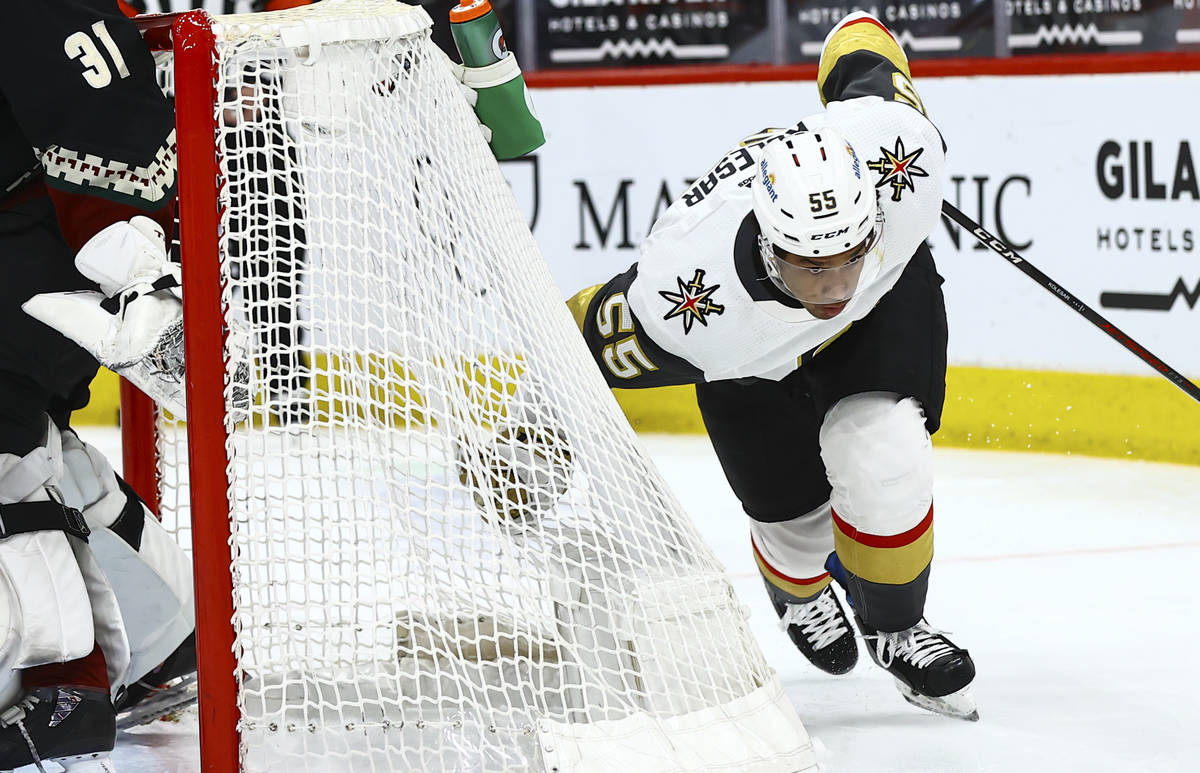 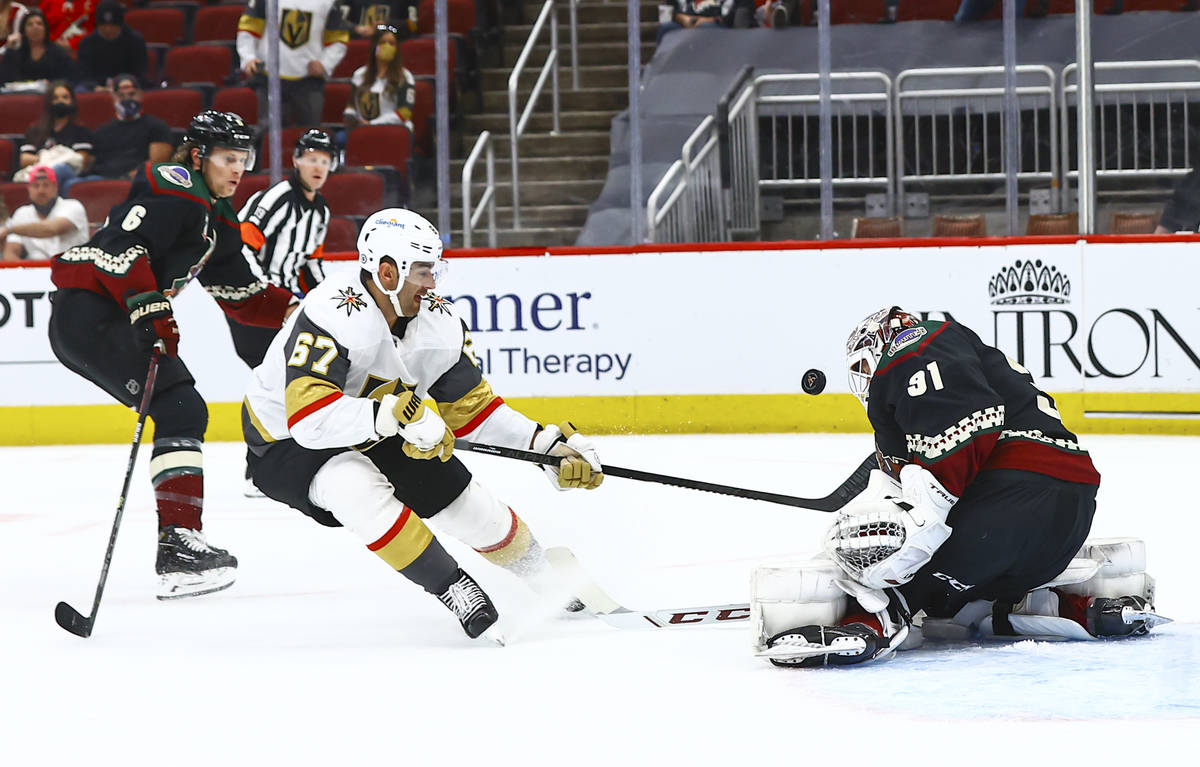 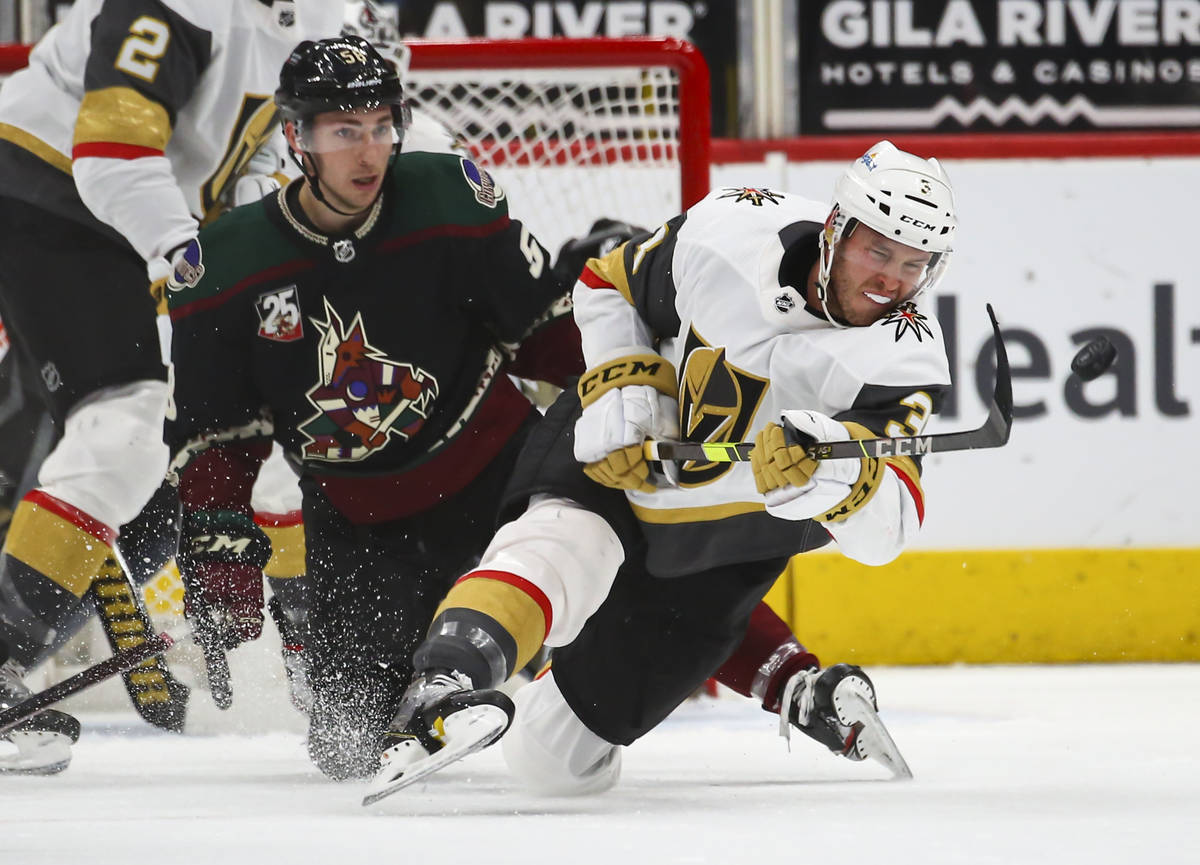 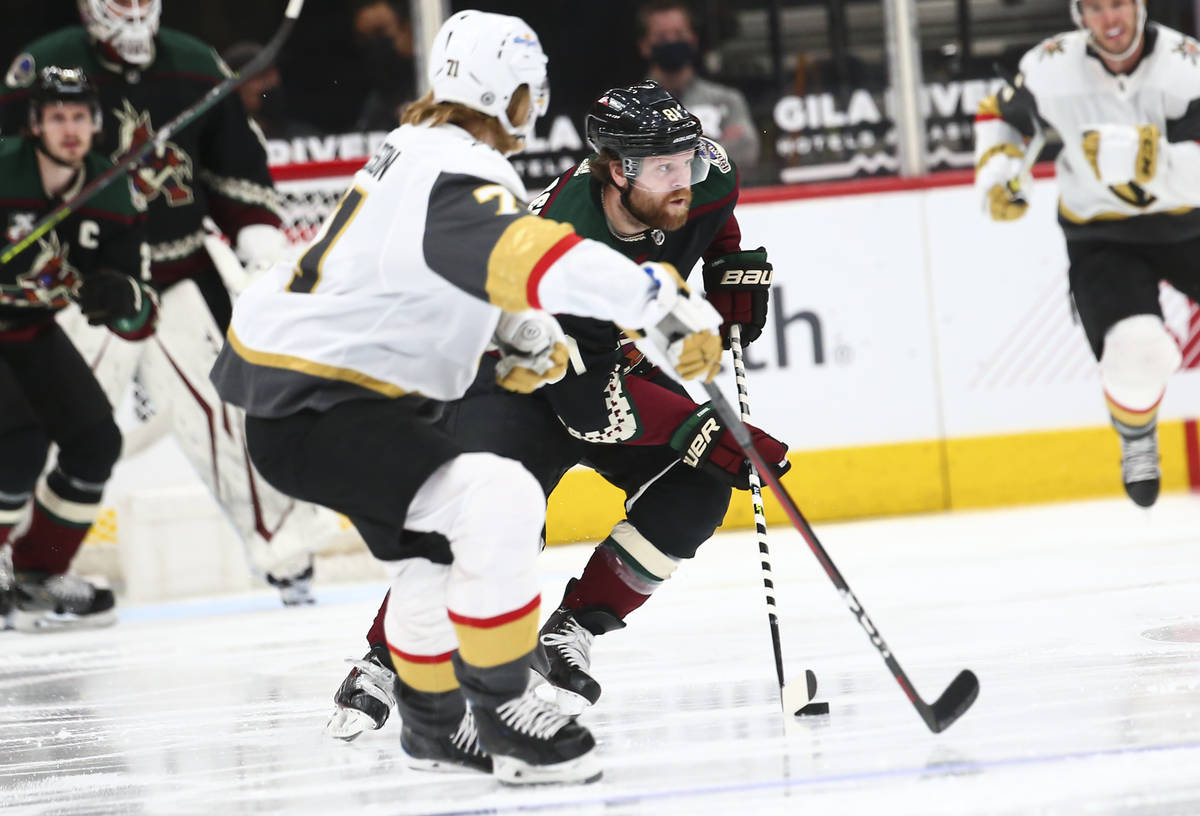 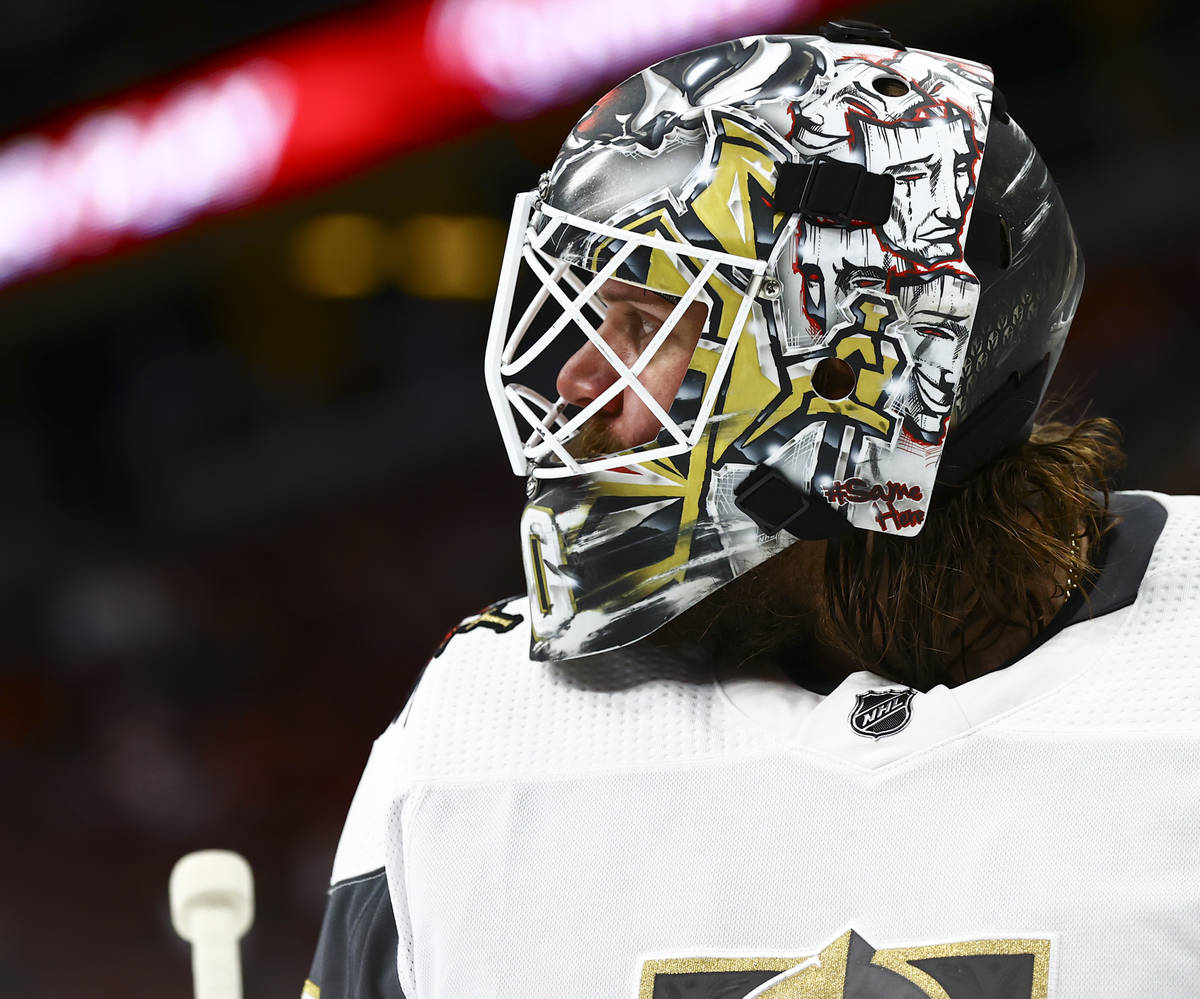 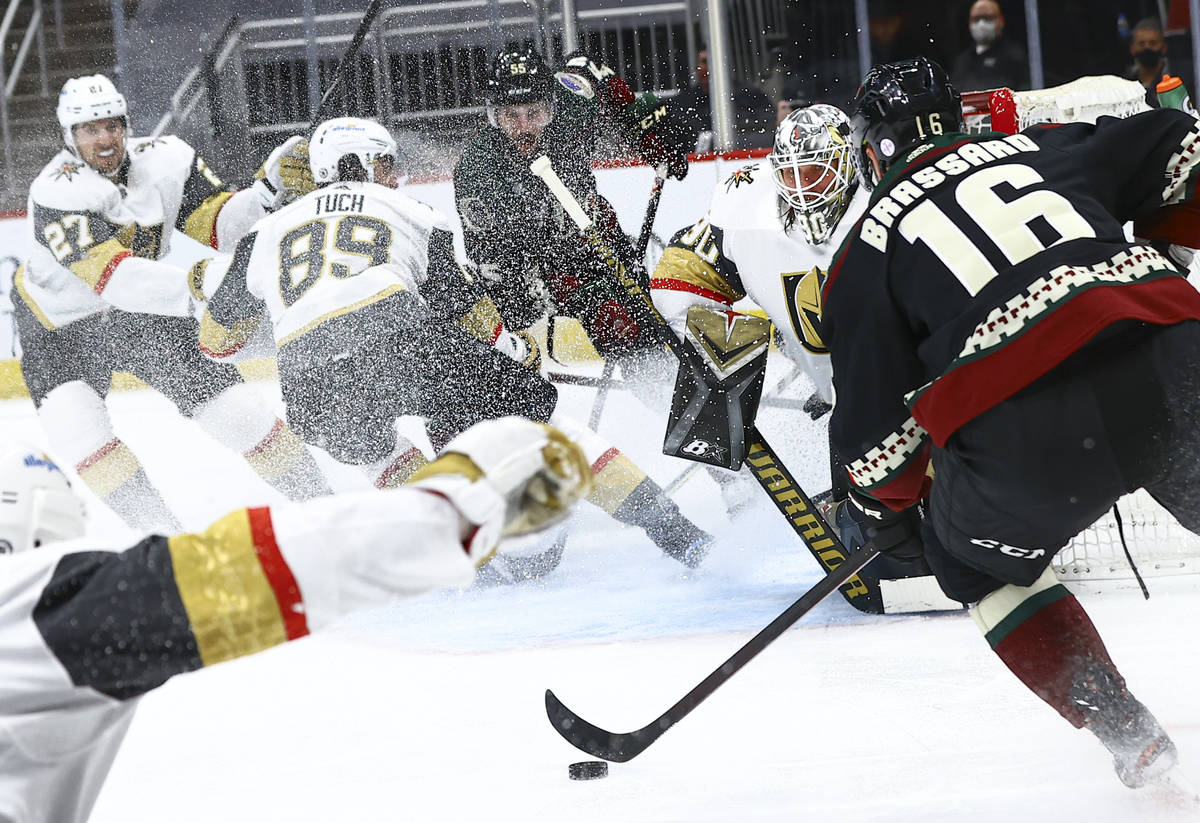 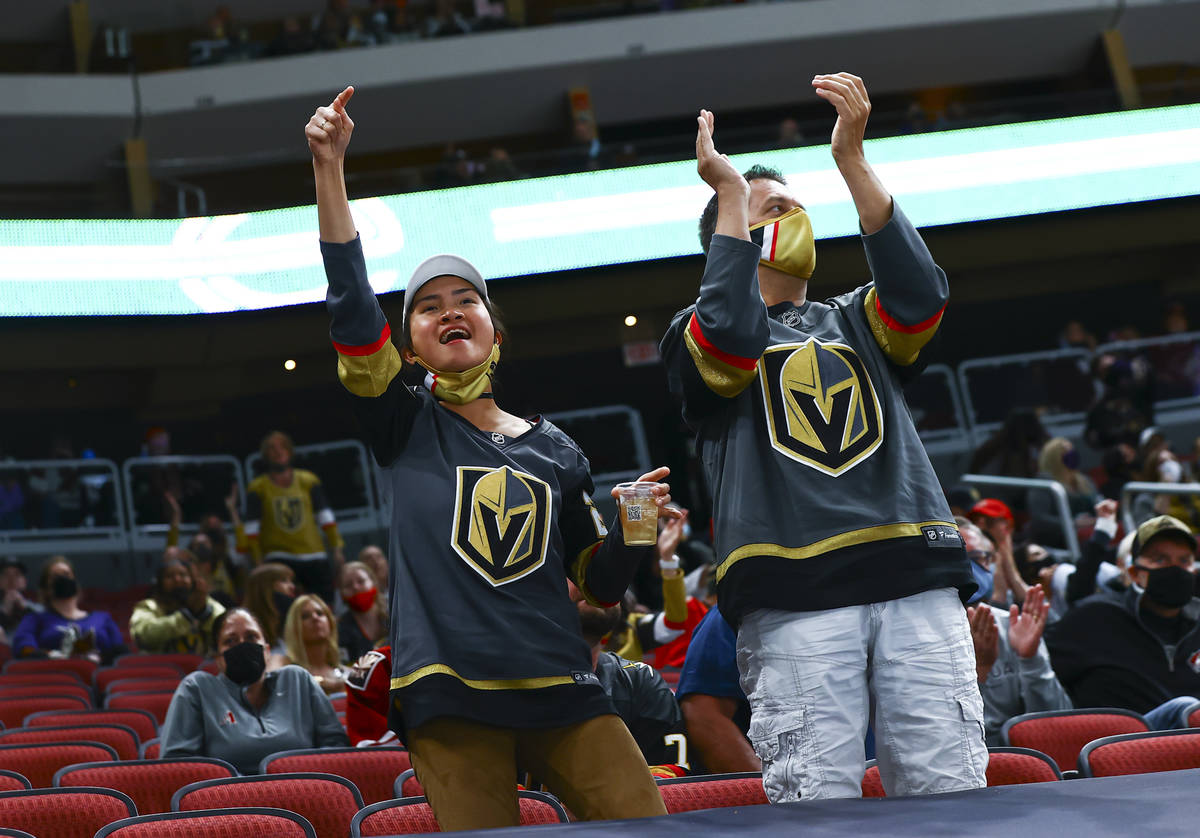 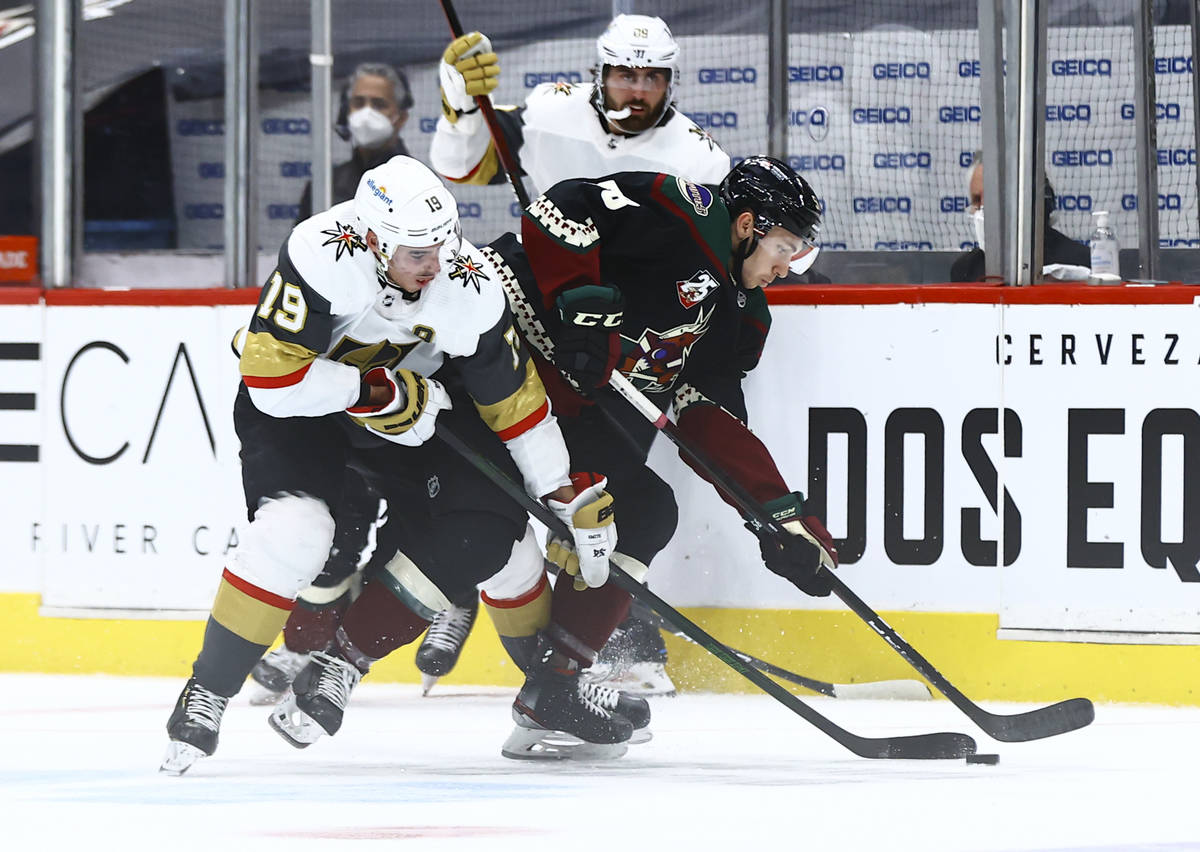 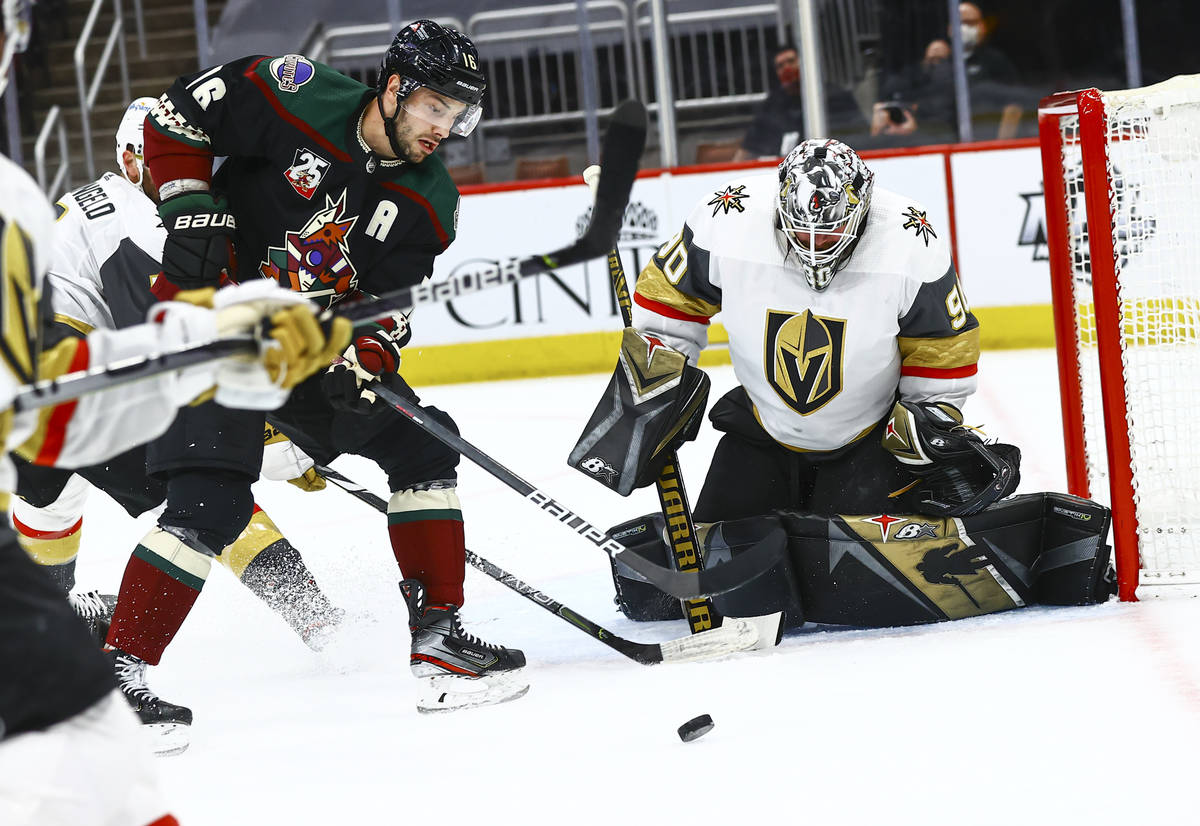 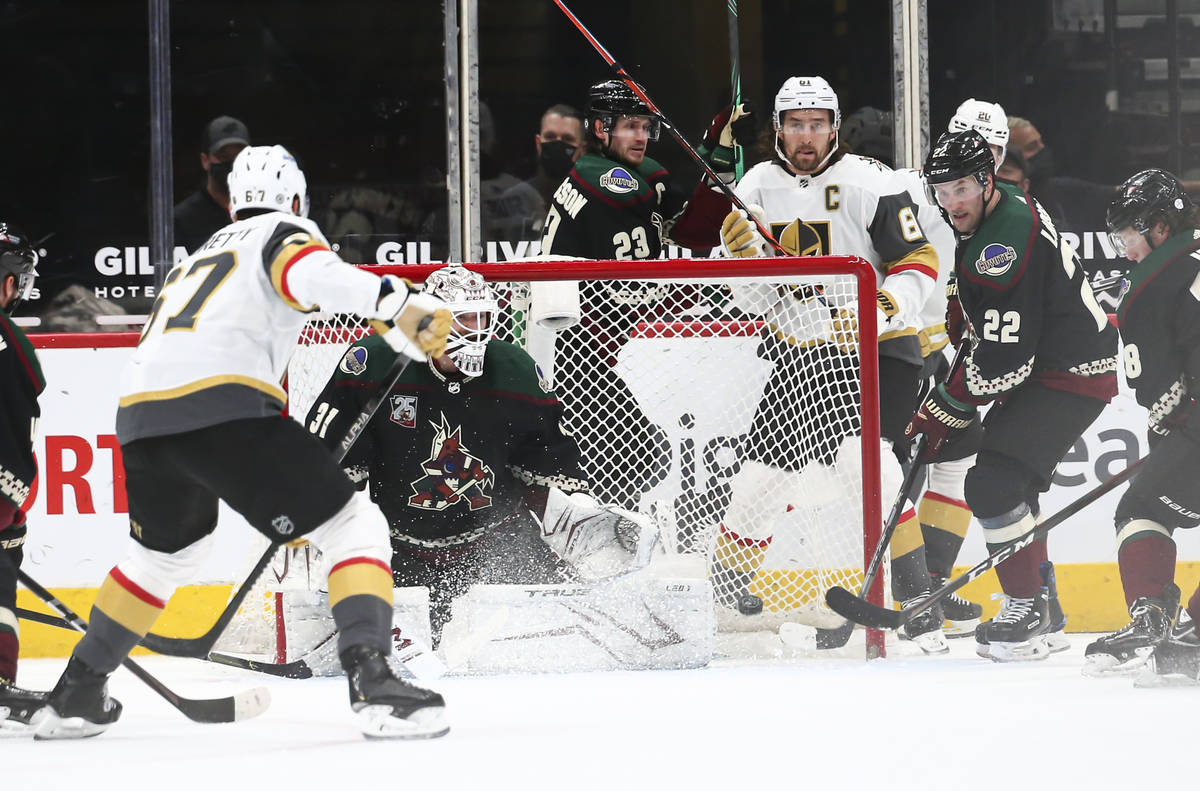 GLENDALE, Ariz. — The chances of the Golden Knights meeting Arizona to open the playoffs remain slim, even after Friday’s result.

The Knights continued to struggle with their desert neighbors and saw their 10-game winning streak snapped in a 3-0 loss before an announced crowd of 5,111 at Gila River Arena.

“We might have had a little bit of an emotional letdown after playing Colorado,” captain Mark Stone said. “These guys are fighting for their lives and they don’t have many points to give if they want to get in the playoffs. They played desperate, but overall, offensively we just weren’t very good.”

The Knights (35-12-2, 72 points) played without winger Jonathan Marchessault, who is considered day to day with an undisclosed injury, and fell for the first time since April 7 at St. Louis.

Combined with Colorado’s victory, the Knights saw their lead in the West Division shrink to four points with seven games remaining. The Avalanche have played one fewer game.

Arizona hunted pucks all over the ice and kept the Knights to the outside on offense. The Knights mustered two shots on goal in the final 15:18 of the second period.

The Knights scored 44 goals during their win streak but were shut out for the third time this season. They totaled 14 shots combined in the final two periods and fell to 5-2 in the season series against Arizona, though that record is a bit deceiving as two of those games were 1-0 victories.

The second game of the back to back is Saturday.

“They did some things to keep us from the scoring areas and on the outside and perimeter a little more than we’d like to be,” coach Pete DeBoer said. “We’ve got to solve their goalie. He’s played well against us. We’ve got to find a way to make it tough on him.”

Knights goalie Robin Lehner played well and finished with 29 stops but sustained the second regulation loss in his Knights career, both of which came against Arizona. He also was in net for the 5-2 road setback on Jan. 22.

John Hayden cashed in a long rebound midway through the first period for Arizona, and Michael Bunting put back a rebound for a 2-0 lead early in the third.

The Coyotes snapped a two-game losing streak and moved three points behind St. Louis for the fourth playoff spot. The Blues have three games in hand.

“I think they were just executing at a higher rate than we were,” defenseman Zach Whitecloud said. “Obviously, they spent a good majority of time in our zone. They did a good job of getting pucks and guys to the net and doing good things off the rush.”

Coyotes goalie Adin Hill made his first start since April 11 and made 25 saves for his second shutout of the season.

Stone hit the post from close range on a power play early in the third period, and Hill turned away Alex Tuch streaking down the right wing with about nine minutes remaining.

“I joked with the guys, we’re not the Harlem Globetrotters. We can’t win them all,” Stone said. “We’ll build off this and we’ll be ready (Saturday). We’ve got to continue to win games if we want to be where we want to be at the end of the year.”

The Knights put early pressure on Hill but allowed the first goal for the third time in the past five games.

Alex Pietrangelo’s pass was intercepted by Arizona’s Lane Pederson behind the net, and the Knights defense broke down after Lehner stopped the initial drive from the point by Jason Demers.

The puck bounced to Hayden in the slot and he tallied his second goal at the 9:13 mark of the first.

“They’re coming off a couple losses and I thought they played a really good game,” DeBoer said. “Their goalie was good. It was a lot of little things that kind of added up to a loss. We have to fix it, move on, look at it, move on and get ready for (Saturday) night.”