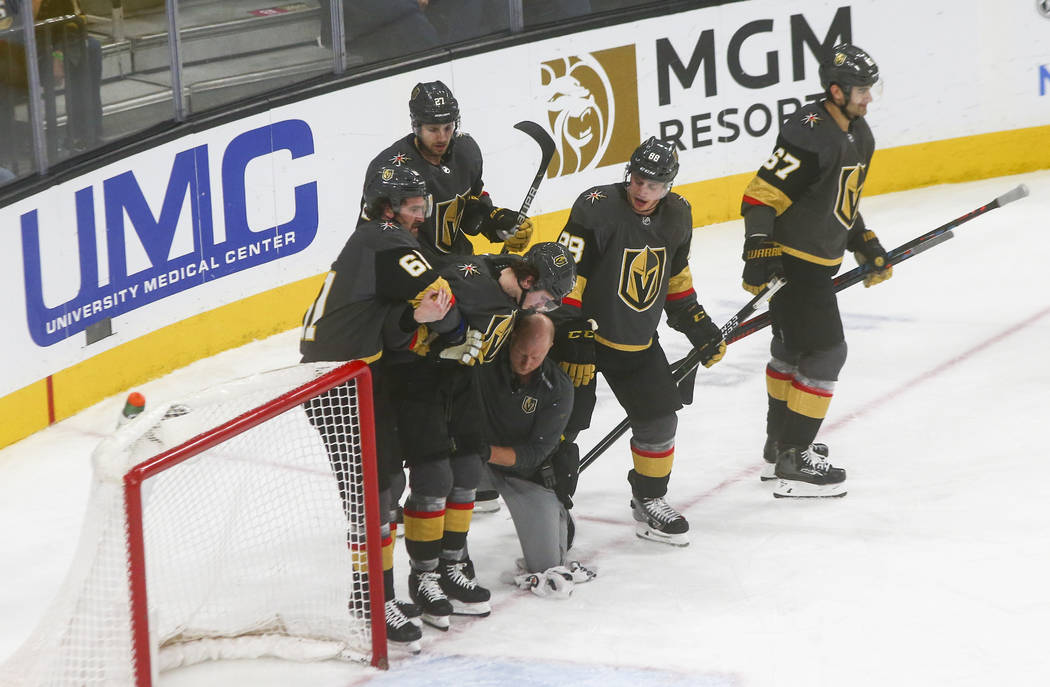 Golden Knights' Cody Glass (9) is escorted off the ice with the help of teammates during the third period of an NHL hockey game against the St. Louis Blues at T-Mobile Arena in Las Vegas on Saturday, Jan. 4, 2020. (Chase Stevens/Las Vegas Review-Journal) @csstevensphoto 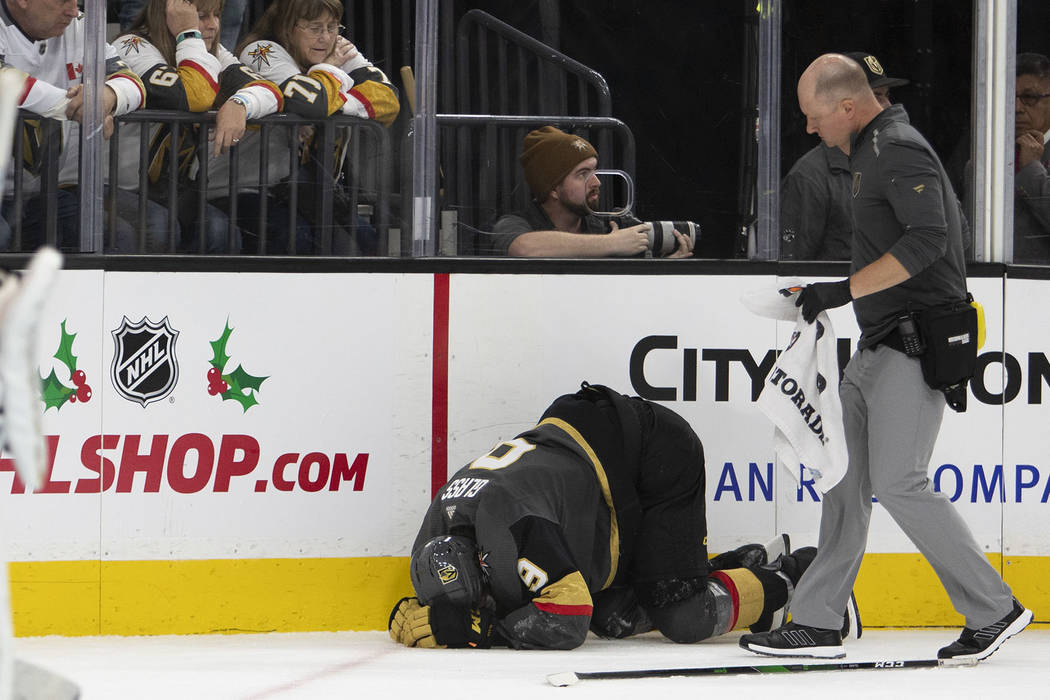 Vegas Golden Knights center Cody Glass (9) crouches in pain during the second period of the game against the New York Rangers on Sunday, Dec. 8, 2019, at T-Mobile Arena, in Las Vegas. Glass was escorted off the ice by teammates. (Ellen Schmidt/Las Vegas Review-Journal) @ellenkschmidt_

The Golden Knights forward underwent surgery on his right knee and will miss the remainder of the season, coach Pete DeBoer said Saturday.

DeBoer said he expects the 2017 first-round pick to be ready for training camp in September.

“(It’s) unfortunate, but excited about him getting back next training camp,” DeBoer said. “That’s my understanding of the time frame. He’s done for this year.”

Glass was injured Feb. 20 while playing for the Chicago Wolves in an American Hockey League game. He collided with Grand Rapids forward Michael Rasmussen about six minutes into the game and struggled to skate to the bench after the play.

Not the best quality or angle, but here is the hit that ended Cody Glass' day. #GRvsCHI #VegasBorn pic.twitter.com/30DV8buefD

Glass, who turns 21 on April 1, injured his left knee while playing with his major-junior team last season and battled through at least two separate injuries this season with the Knights.

He sustained a concussion Dec. 8 after catching an elbow to the back of his head from New York Rangers left wing Brendan Lemieux and missed eight games.

Glass also injured his right knee Jan. 4 in the third period against St. Louis when he got tangled up with Blues defenseman Jay Bouwmeester and was sidelined for 14 games.

In 39 games with the Knights, Glass produced five goals and 12 points.

An all-female broadcast team will cover the game between the Knights and Calgary Flames on Sportsnet in Canada as part of International Women’s Day.

Leah Hextall will serve as the play-by-play announcer and will be joined by analyst Cassie Campbell-Pascall, who captained the Canadian women’s ice hockey team to the gold medal at the 2002 Winter Olympics, and reporter Christine Simpson. The production crew also consists exclusively of women.

Knights prospect Jack Dugan’s season was extended by at least a week, as Providence qualified for the Hockey East Association playoffs.

The Friars will play a best-of-three series that starts Friday against top-seeded Boston College.

Dugan leads the NCAA in scoring, and the Knights are expected to make a strong push to sign the sophomore when his season ends.