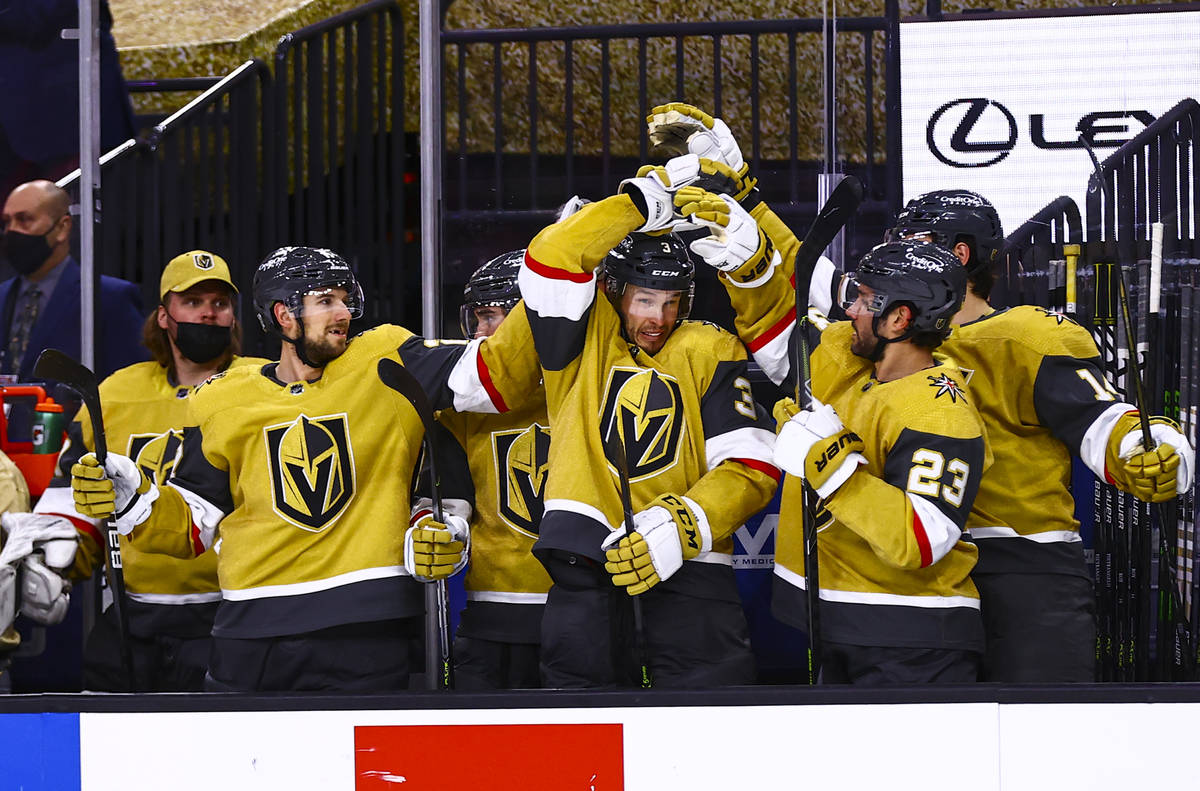 The Golden Knights celebrate a goal by right wing Alex Tuch, not pictured, during the third period of an NHL hockey game against the Arizona Coyotes at T-Mobile Arena in Las Vegas on Wednesday, Jan. 20, 2021. (Chase Stevens/Las Vegas Review-Journal) @csstevensphoto 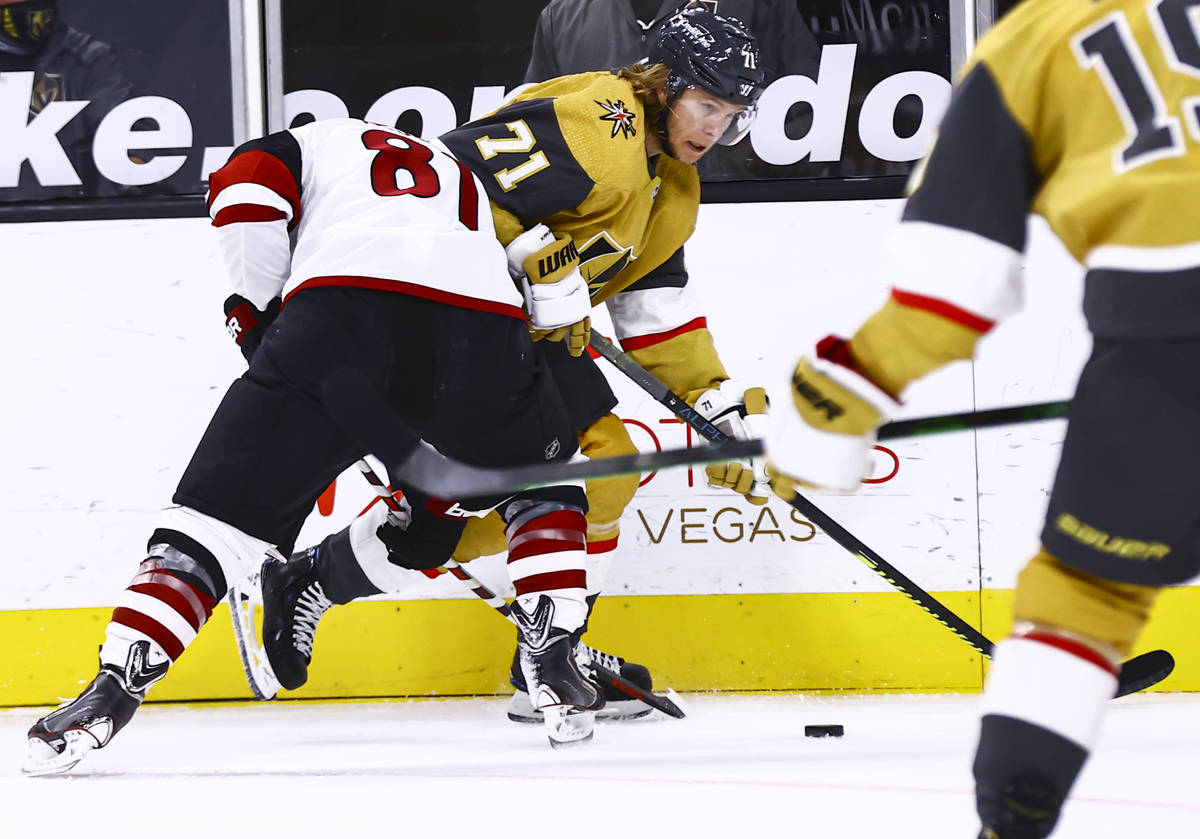 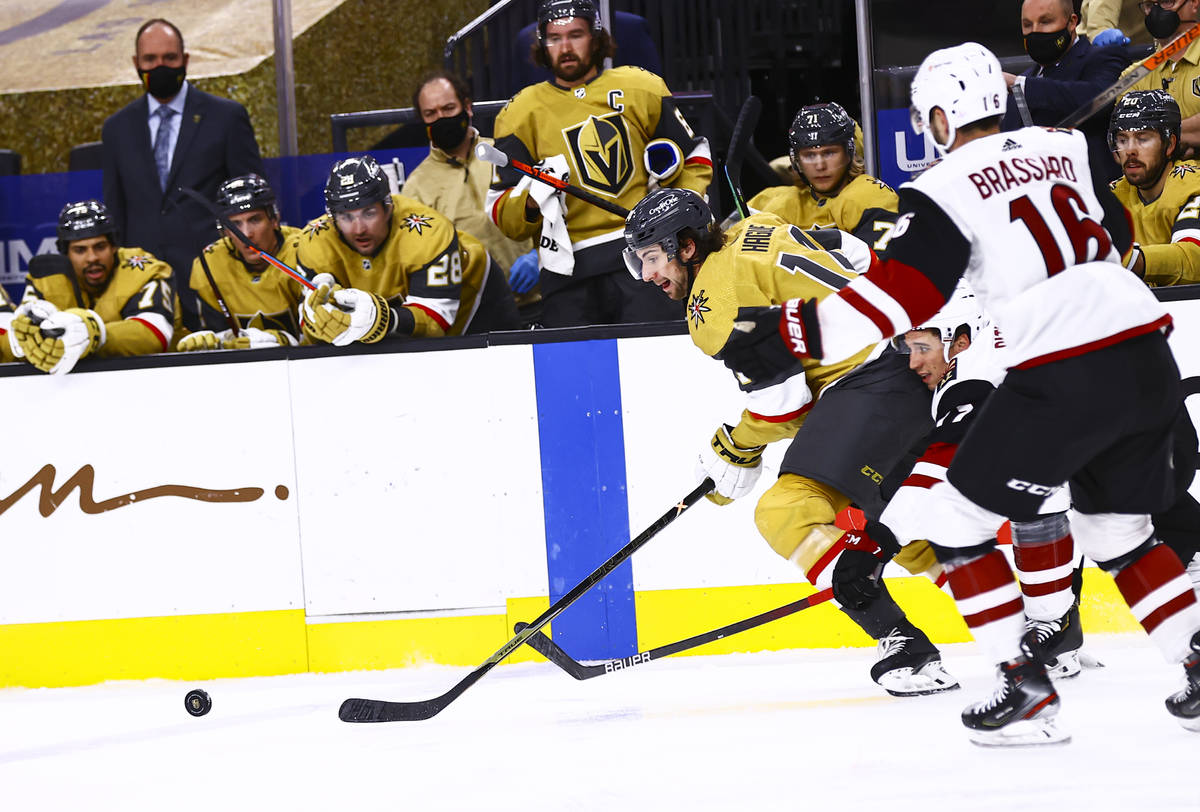 Golden Knights defenseman Nicolas Hague (14) skates with the puck during the second period of an NHL hockey game against the Arizona Coyotes at T-Mobile Arena in Las Vegas on Wednesday, Jan. 20, 2021. (Chase Stevens/Las Vegas Review-Journal) @csstevensphoto

When the Golden Knights held their team meeting Thursday morning, it wasn’t to review their aching power play or highlight the strong goaltending during their franchise-best 4-0 start.

Rather, the purpose was to reinforce the protocols in place for the club’s traveling party ahead of the first road trip of the season.

“What stood out was it was the longest meeting we’ve had,” coach Pete DeBoer said. “That kind of gives you an idea of the extent of the protocols, from buses to planes to hotels to restaurants to rink access. It’s everything. Very extensive list.”

The Knights headed to Arizona for two games against the Coyotes starting Friday at Gila River Arena with the coronavirus pandemic impacting every aspect of their itinerary.

Jay Mellette, the director of sports performance/head athletic trainer, is in charge of ensuring the Knights organization is following guidelines agreed to by the league and NHL Players’ Association.

That includes restrictions during air travel such as remaining seated for the duration of the flight “except to use lavatories” and avoiding “eating and drinking at the same time as others in the row.”

Once the team arrives in Arizona, “the club’s traveling party shall not patronize or enter internal venues other than the designated hotel, the practice facility or the game arena” and is prohibited from having close contact with the general public, according to the club travel protocols.

“I think our group’s got to be diligent and also hope we get lucky and can avoid this,” DeBoer said.

Club personnel also are prohibited from inviting guests or other members of the traveling party into their hotel room.

However, players can meet in a designated common area or lounge that has sufficient space for physical distancing. That area is required to be stocked with snacks and beverages for players.

The Washington Capitals were fined $100,000 by the NHL on Wednesday for violating COVID-19 protocols, and the team issued a statement confirming four players interacted in their hotel room during the season-opening road trip.

“Obviously this is very different times, and it’s very trying times, but it’s a little bit of sacrifice for hockey, honestly,” Knights winger Alex Tuch said. “I know everyone in this locker room doesn’t mind giving up a little bit of freedom. It’s a little stricter than obviously we’re used to, and we’re going to be locked down pretty tight, especially on the road.”

DeBoer compared the trip to a “moving version” of the NHL’s postseason bubble in Edmonton, Alberta, and Toronto when club personnel were isolated from the public.

One significant difference will be the presence of fans at Gila River Arena. The Coyotes hosted approximately 2,300 fans for each of their first two home games against San Jose.

“Even though we’ll be on the road, I heard there’s going to be a good amount of Vegas Golden Knights fans, so we’re excited to see that,” Tuch said. “Hopefully a lot of them are rocking maybe the retro or the gold jersey. I think it’ll be a lot of fun for them to be able to come watch a game.”