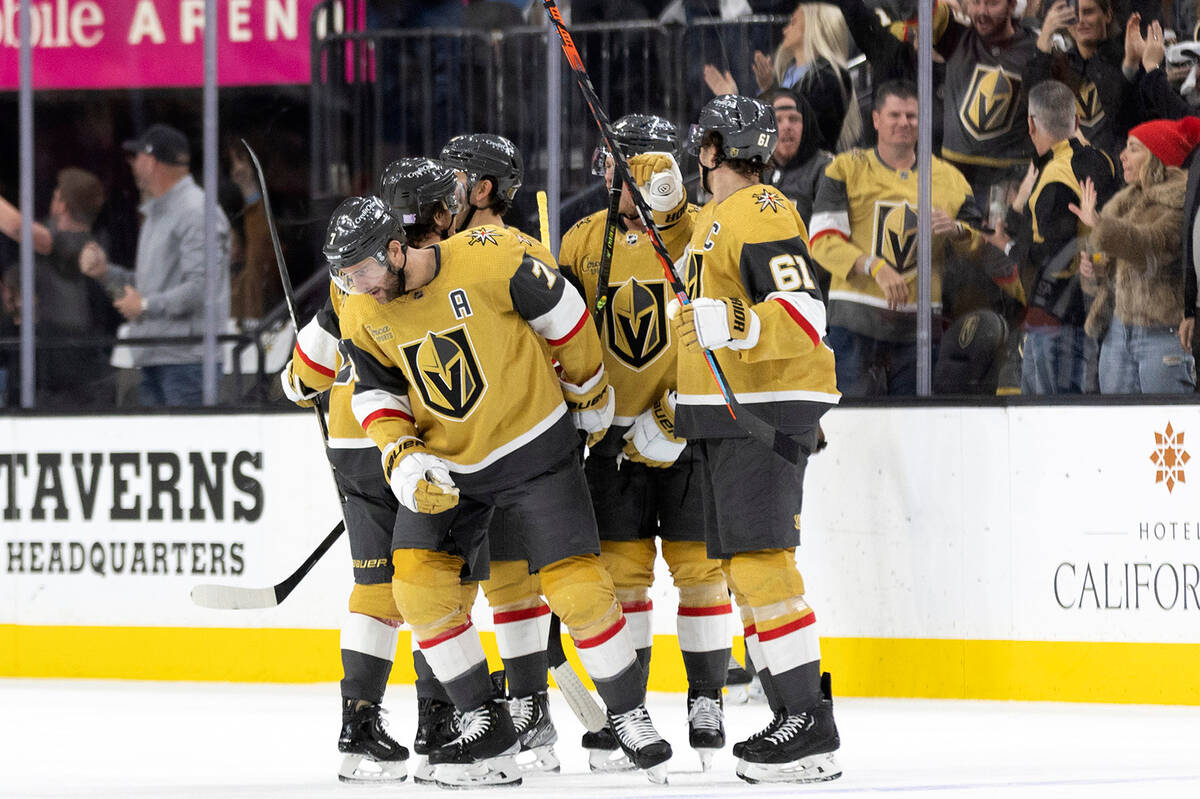 The Golden Knights celebrate after defenseman Alex Pietrangelo (7) scored a goal during the second period of an NHL hockey game against the Coyotes at T-Mobile Arena on Thursday, Nov. 17, 2022, in Las Vegas. (Ellen Schmidt/Las Vegas Review-Journal) @ellenschmidttt

Alex Pietrangelo’s offensive game was on full display Thursday against the Arizona Coyotes.

There was the blast from the point for the Golden Knights’ first goal. A quick pass to beat a defender and keep a fourth-line attack alive. An activation deep into the offensive zone that led to captain Mark Stone’s rebound goal.

The defenseman’s skating, skills and instincts make the Knights’ offense far more challenging to defend when he’s on his game. What should be scary for opponents is he and coach Bruce Cassidy think he still has more to unlock.

Pietrangelo has 17 points in 18 games, tied for the sixth-most among NHL defensemen, but his goal Thursday was only his second. There should be more to come if he keeps playing the way he is.

“He’s activated a lot this year where I think we’ve missed him,” Cassidy said. “He’s been in the slot, and we’ve made a different play, so he’s right there. He’s just got to keep coming.”

Cassidy is asking him to be more of a passer on the power play than a shooter. He also wants Pietrangelo to pick his spots on offense to make sure the Knights’ defensive structure is solid, rather than playing with the freedom he was granted by former coach Pete DeBoer.

“Any athlete enjoys a challenge,” Martinez said. “It’s the best part about playing in this league is you get to play against the best players.”

It’s a credit to Pietrangelo that he’s still finding ways to score nearly a point per game. He has three three-point games this season after having none in his first two seasons with the Knights. He’s doing it without forcing his offense, either.

Pietrangelo said he doesn’t need to look to make something happen when he’s out with the Knights’ top two lines. He knows they will create opportunities. He just needs to be available when needed.

His patience is being rewarded. Pietrangelo is scoring at the highest rate of his career while shooting less often per game than he has the previous three years.

“They’ll make the play,” Pietrangelo said. “You just have to find the right hole, take care of the defensive side and find those spots offensively.”

The Knights have still missed some opportunities despite Pietrangelo’s production.

Pietrangelo thinks that line of thinking could apply to the blue line as a whole. The Knights defensemen have the third-most points in the NHL (44) but are tied for 14th in goals (seven). If they start scoring more, it could add a new dimension to a team already ranked fifth in goals per game (3.61).

“For all of us, it’s not going in right now as a D corps,” Pietrangelo said. “But when we start scoring — we’re getting a lot of good looks — it’s going to really change the look of our offense.”