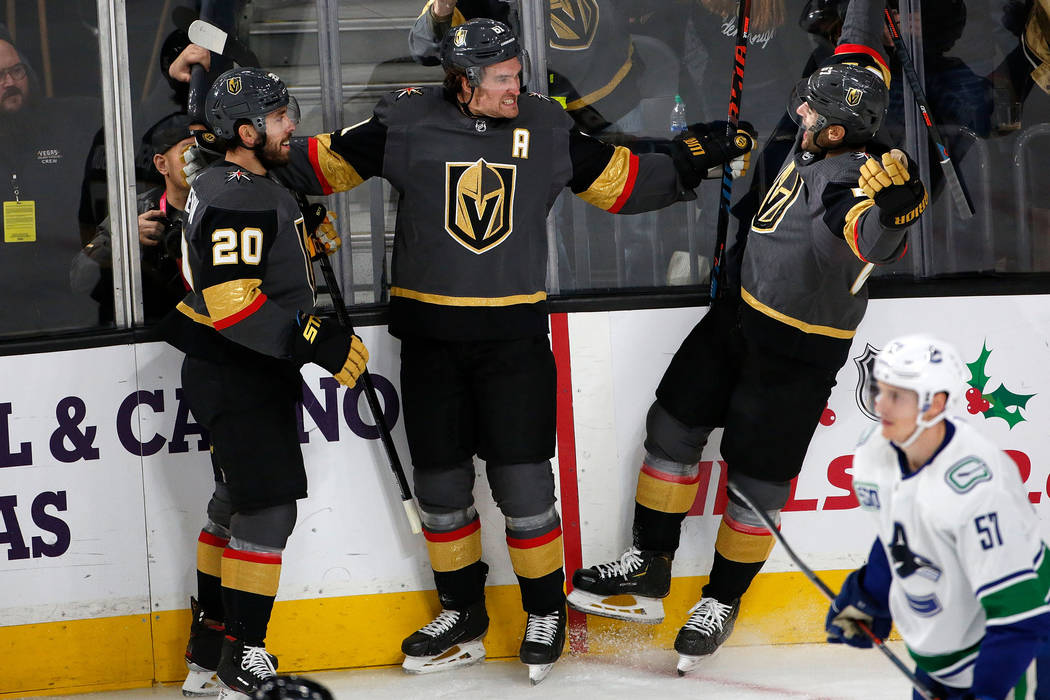 A Golden Knights goal often turns Mark Stone into the hockey equivalent of the Tasmanian Devil.

There’s no telling how his fist and stick with fly through the air. No teammate is safe from the burly right wing’s bear-hugs. And the Knights can’t get enough of his antics.

Seeing their alternate captain and highest-paid player go nuts is one of the team’s favorite sights. Despite being seemingly reserved off the ice, Stone may have the Knights’ best celebrations.

“You see a lot of guys who score a lot of goals, because they’re so used to it sometimes they score and give a high-five,” right wing Ryan Reaves said. “They’re very nonchalant about it, but (Stone) is always fired up.

Stone’s celebrations take many forms but he has a few constants. There’s his go-to, the windmill punch through the air. It’s what he chose to do when the Knights’ production crew filmed celebrations in training camp for goal announcements at T-Mobile Arena. He brings his right first back before launching it past his ear and over his helmet.

There’s also the short double-fist pump. He also sometimes just raises one first in the air. Each move typically involves Stone screaming at the top of his lungs.

“It looks like it’s a lot of fun, huh?” said left wing Max Pacioretty, Stone’s linemate. “It’s definitely as much fun as it looks. He gets so fired up it gets me fired up, gets the boys fired up. He’s a tremendous competitor.”

Stone has been able to show off his moves after each of his 13 goals this season, third-most on the Knights. He had an eight-game goal drought from Nov. 29 to Dec. 13 but snapped it Dec. 15 against the Vancouver Canucks. He brought out the windmill punch for that one.

Stone’s reactions after he scores are just half of his celebration game. He doesn’t just get excited for his own goals. He goes crazy when his teammates score.

If one of his linemates score, Stone is often the first one in the corner celebrating with them.

”A-plus,” said Chandler Stephenson, Stone’s center. “To see guys get that excited and just have so much passion for the game is special. He loves scoring. Even when other guys score, it’s almost the same reaction. That just kind of says the kind of guy that he is.”

The emotional surges Stone provides is exactly what the Knights were looking for after acquiring him at last season’s trade deadline. They were drawn to the person as well as the player.

“He’s one of those guys that leads by example,” Reaves said. “He just works his bag off. That what’s you want out of a top player and a leader on your team. He brings all those elements. His fiery attitude on the ice is infectious on the bench too.”