Golden Knights’ Pete DeBoer faces unique challenges
Pete DeBoer had the team jelling before the coronavirus pandemic paused the season. He now has to get the Knights to play at that level again.
Vegas Golden Knights head coach Peter DeBoer looks to players returning from a break during practice at the City National Arena on Thursday, July 23, 2020, in Las Vegas. (L.E. Baskow/Las Vegas Review-Journal) @Left_Eye_Images

Pete DeBoer’s first months with the Golden Knights read like an over-the-top screenplay.

It started with a mad dash from Florida to Ottawa so he could join his new team. Then he had to win over players that he spent two straight postseasons coaching against. And finally, just as things began to click, a pandemic forced the group to scatter.

Now, DeBoer must lead his team through the strangest postseason in NHL history. He also must do so holed up in a JW Marriott in Edmonton, Alberta, as part of a “secure zone” that allows no outsiders to enter and no insiders to leave until they’re eliminated.

If the unforeseen complications are weighing on DeBoer, he hasn’t shown it. He’s displayed the same steady hand that guided his last two teams to the Stanley Cup Final in his first year in charge.

The Knights are counting on him to find the right buttons to push again in the playoffs. That’s what they hired him to do, regardless of what happened in between.

“I think you’re just in day-to-day survival mode,” said DeBoer, 52. “You don’t really think about it. I’m sure I’m going to look back at this six months and it’s going to be a real memorable time. There’s a lot of years in coaching that kind of blend in together. But I guarantee I’ll remember this window of coaching, for a lot of good reasons.”

DeBoer’s hiring was, in a word, awkward.

Well-liked coach Gerard Gallant’s Jan. 15 dismissal was a shock to many. Replacing him with DeBoer, whose San Jose Sharks engaged with the Knights in a heated and controversial first-round series last season, seemed equally unbelievable.

The initial uneasiness disappeared quickly, though, as DeBoer led the team to its second Pacific Division title in three seasons. His demanding but open approach earned him respect quickly. The results didn’t hurt, either.

“The boys like him,” said defenseman Jon Merrill, who also played for DeBoer for parts of two seasons with the New Jersey Devils. “He understands when to push the guys and when to manage it. … He’s the type of coach where he expects certain things, and if you do them well, he’s happy about it. It’s very black and white with him. There’s not much gray area, which athletes and hockey players appreciate.”

Sharks captain Logan Couture had a similar experience when DeBoer arrived in San Jose in 2015. He talked to some of DeBoer’s former junior players and heard he was tough on guys in order to make them better. The coach Couture met was different.

DeBoer could be exacting, but he also was approachable and prioritized rest for his players.

“He is hard on guys at times when he needs to be, but he has energy and he brings the fun to the game,” Couture said. “He’s laughing a lot. He gets along great with guys.”

Couture said players would join the Sharks and be surprised by how many meetings they had. DeBoer and his staff would take time to sit with a player, a line or a group of veterans to hear their opinions and understand how they were feeling.

“A lot of guys really enjoyed that,” Couture said. “That was something I appreciated. How well he communicated and really could gauge the whole group.”

DeBoer’s communication skills were put to the test with the Knights.

He had never taken over a team midseason in 25 years as a head coach. The fact that he had to win immediately made the job extra challenging.

He spent a lot of time by a whiteboard during his first practices mapping out the changes he wanted to implement. His main focus: Speeding up the Knights.

DeBoer wanted faster breakouts and faster transitions so his team could more closely resemble the one that reached the 2018 Stanley Cup Final. He gave defensemen more freedom to join the attack and asked skaters to take shorter shifts to conserve energy.

He rode a similar formula to success in San Jose. The Sharks appeared in 60 postseason games during his five-plus seasons, second in the NHL to the Pittsburgh Penguins. His methods also helped New Jersey reach the 2012 Stanley Cup Final.

“The main focus was to get out of our own zone as quick as possible, have our defensemen active and defend hard,” Couture said. “(Also) be better on the penalty kill and have a top power play.”

The Knights adjusted their approach and soon saw the benefits. They went 15-5-2 under DeBoer and jumped from fifth to first in the Pacific Division.

“You look at our last 10 or so games, we were rolling pretty well,” defenseman Deryk Engelland said.

DeBoer’s job is much more complex than it was in March.

He needs to figure out how his team can regain that momentum for an extended period. He must decide how to use his goaltending tandem of Marc-Andre Fleury and Robin Lehner. He wants to sharpen a penalty kill that was 29th in the NHL during his 22 regular-season games.

If his coaching history is any indication, he’ll focus on getting his team playing well and let the chips fall where they may. Couture said DeBoer was calm and positive during the postseason with the Sharks.

Even during his first run with the team, which featured a helter-skelter seven-game series against Nashville in 2016, he steered the ship calmly.

“Pete always had the message of ‘Stick with it. We’re playing well,’” Couture said. “We believed him. He believed in us, and we believed in the coaching staff and him.”

The Sharks survived that Nashville series, defeated the St. Louis Blues in the next round and went to their first Stanley Cup Final. DeBoer now wants to achieve something similar with the Knights in the franchise’s third season.

His preparation and decision-making will determine if that’s possible. He’s brought teams to the Final twice but lost in six games both times. His goal is to become the fifth coach in league history to take a third team there, then finish the job. 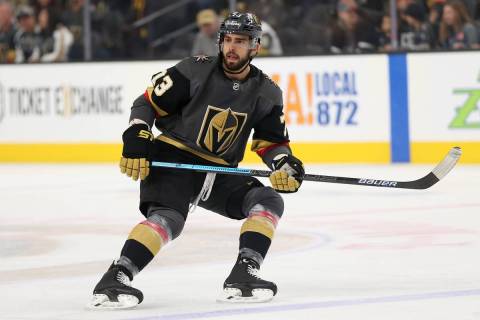