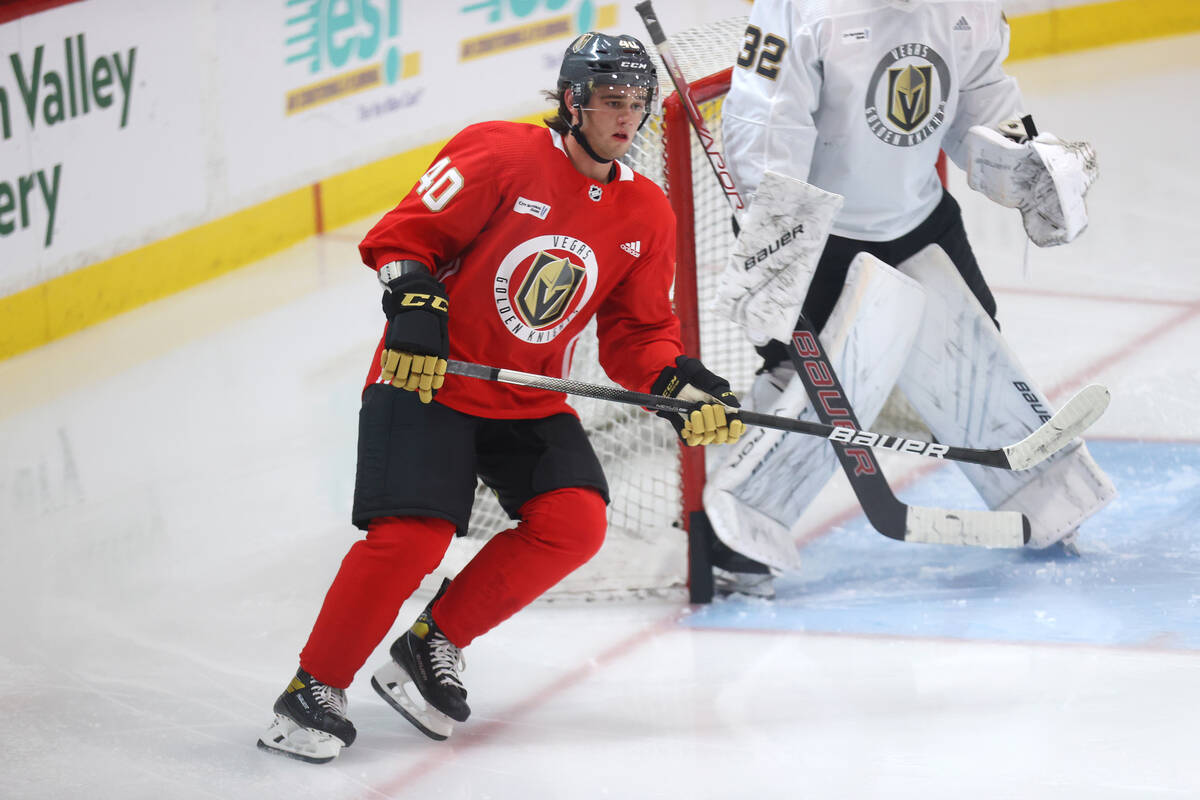 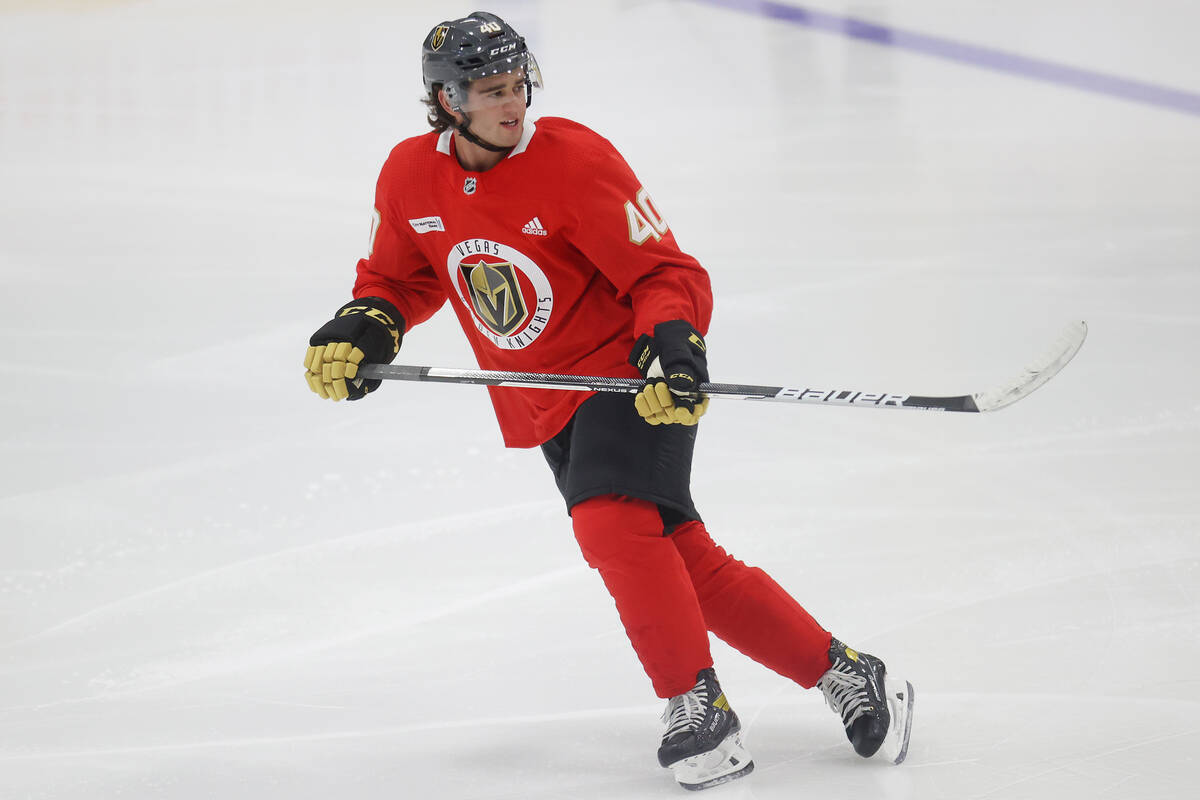 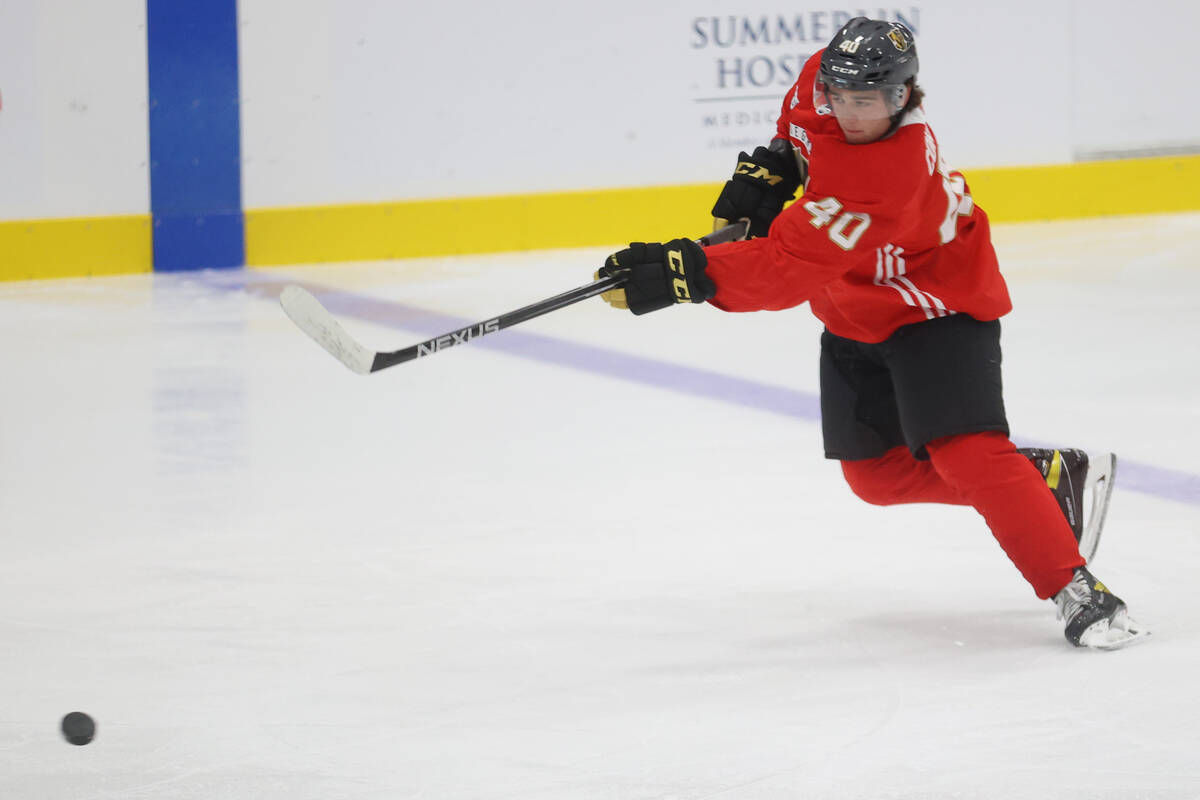 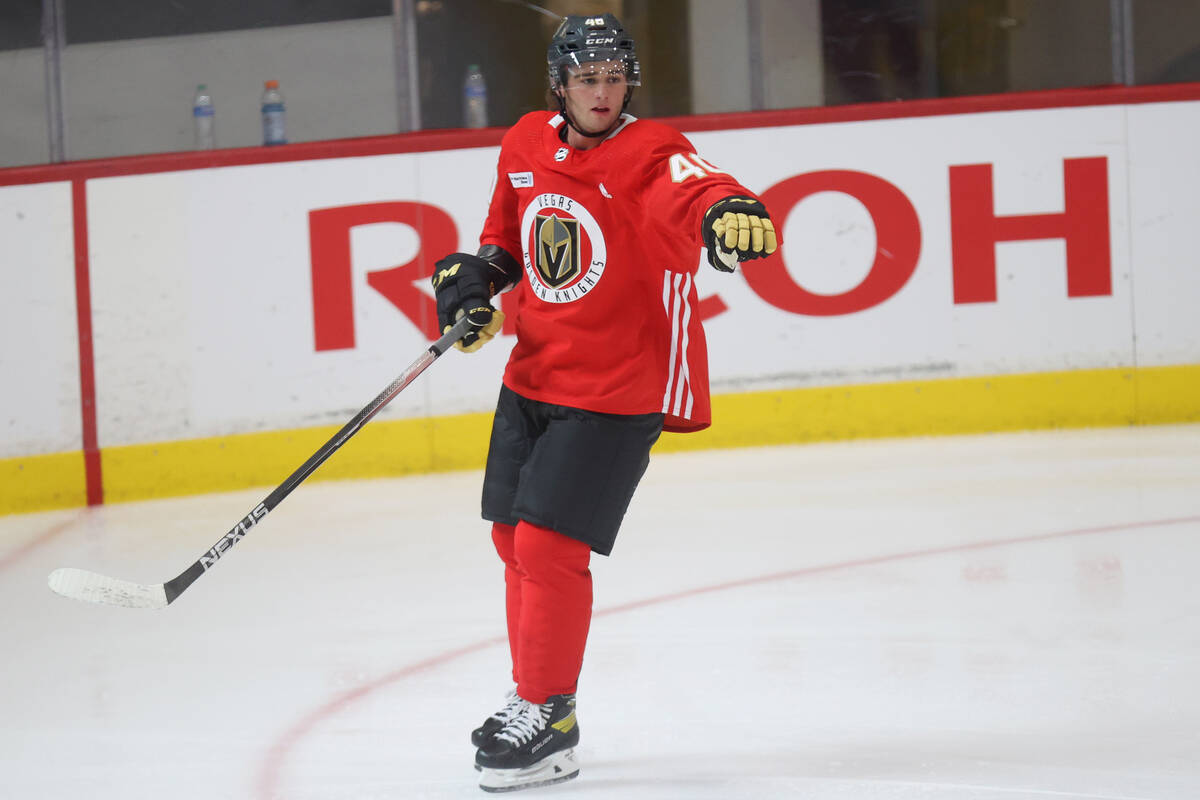 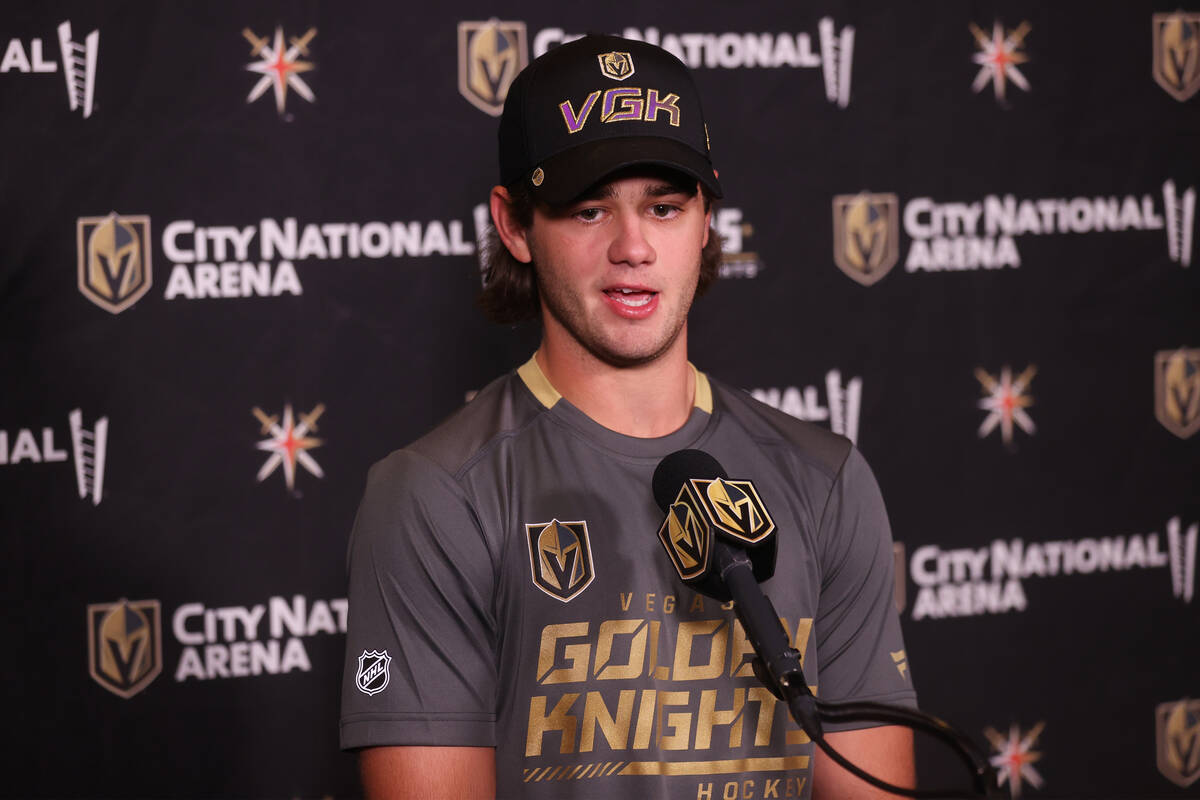 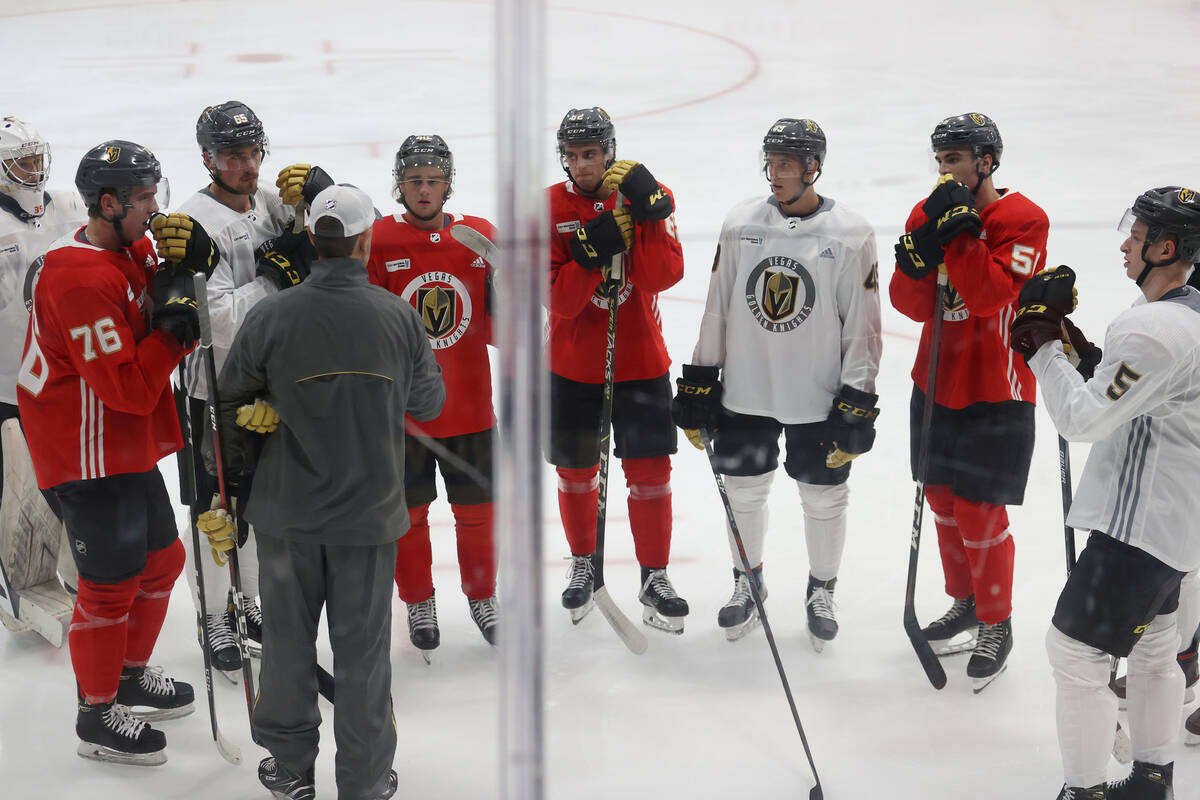 Lukas Cormier already had been drafted by the Golden Knights. He had signed his entry level contract with them, too.

But he finally got to check off a lot of firsts with the organization when rookie camp started this week.

The defenseman traveled to Las Vegas for the first time since being drafted in the third round in October. He skated at City National Arena. And he donned a Knights sweater when the prospects gathered for their first practice Thursday before heading to a tournament in Arizona.

It was a long time coming for the 19-year-old who has turned heads with his play since the draft. He hopes to continue to do so this week with the chance to get in front of many members of the front office and coaching staff for the first time.

“It was cool,” Cormier said. “A little nerve-wracking at the start for a couple drills and then it was good.”

Cormier will have a lot of eyes on him during the Knights’ three rookie games in Arizona because of how much he seemed to improve after being drafted.

He was selected six spots into the third round, a pick the team had after trading left wing Nikita Gusev to New Jersey. He was an intriguing offensive defenseman because his point totals improved in his first two years for the Quebec Major Junior Hockey League’s Charlottetown Islanders, and his skating was promising despite his 5-foot-10-inch stature.

Cormier then proceeded to take his game to another level.

The Sainte-Marie-de-Kent, New Brunswick, native led all QMJHL defensemen with 54 points last season in 39 games. No other blue liner had more than 40. He also scored a career-high 16 goals, second among defensemen in the league.

“He’s really developed well since we drafted him last year,” general manager Kelly McCrimmon said. “He had a tremendous year in the Quebec Major Junior League, which was one of the few leagues that did have something that resembled a normal season.”

The one disappointment last year for Cormier is that he didn’t crack a stacked World Junior Championship roster with Team Canada that featured six first-round picks and one second-rounder in Knights prospect Kaedan Korczak. Four defensemen from last year’s team have aged out of the event now, so one of Cormier’s goals this season is to earn a spot.

“It’s been a dream since I’m young to make that team, and to be one of the last cuts last year, I think it’s just some extra motivation to be there this year,” Cormier said. “I’m going to try my best to make that team.”

Cormier’s path to making the roster starts at rookie camp. He has the skill, skating and shot to stand out among his peers even if he’s still getting used to new teammates and how the Knights want him to play.

It’s his chance to show he’s ready to build off the excitement he generated last season.

“I like his mobility and how he sees the ice,” said Silver Knights coach Manny Viveiros, who is running the rookie camp. “He’s got a good future ahead of him.”