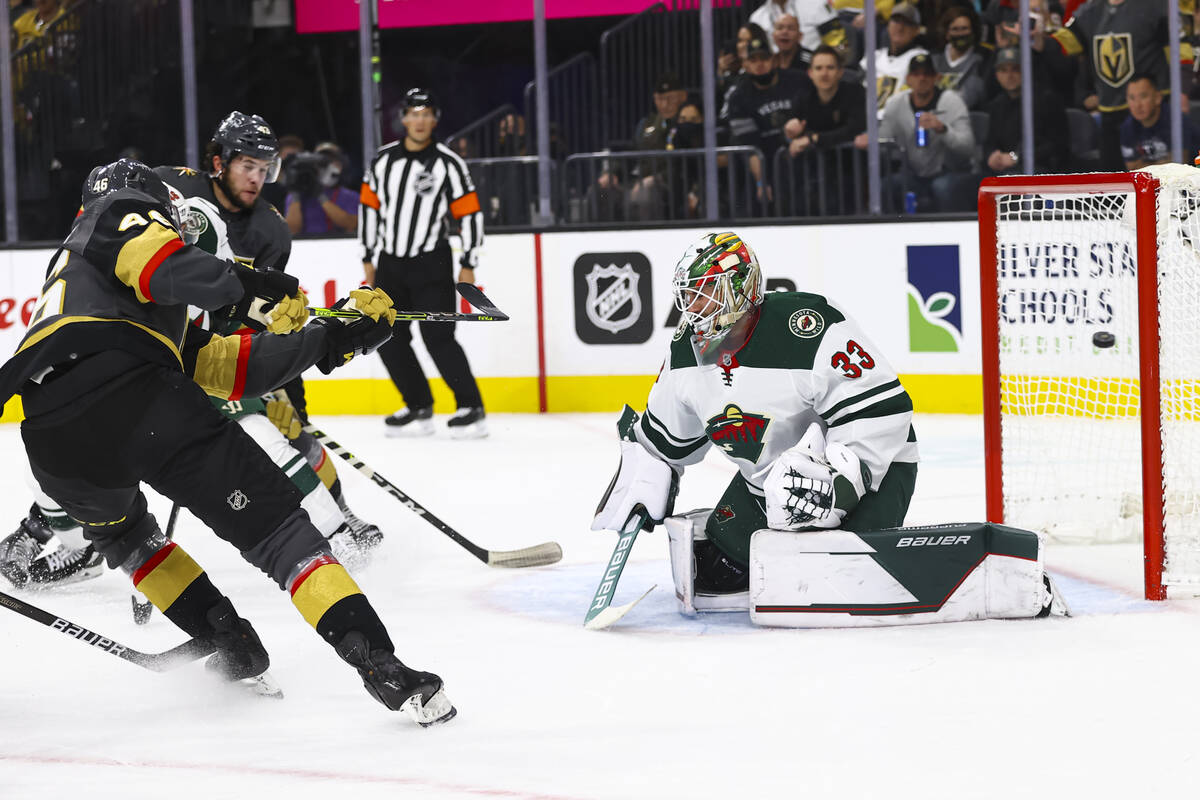 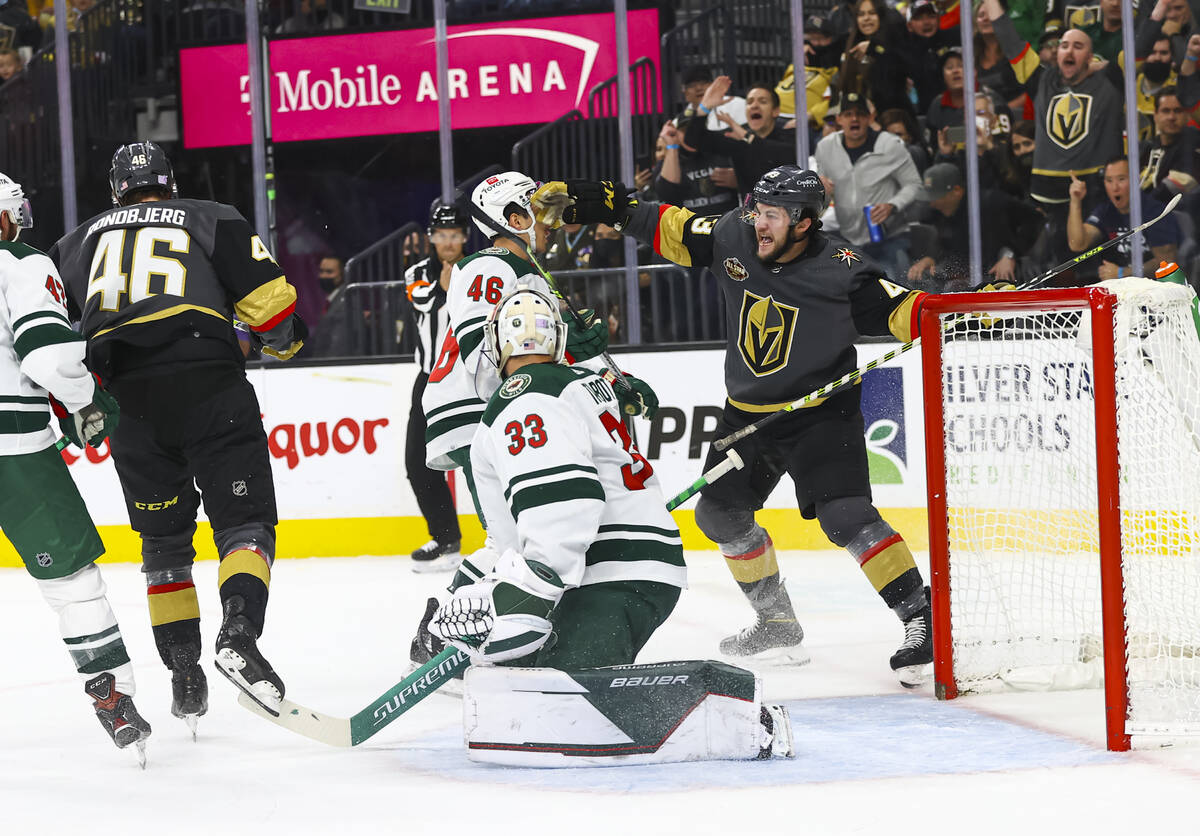 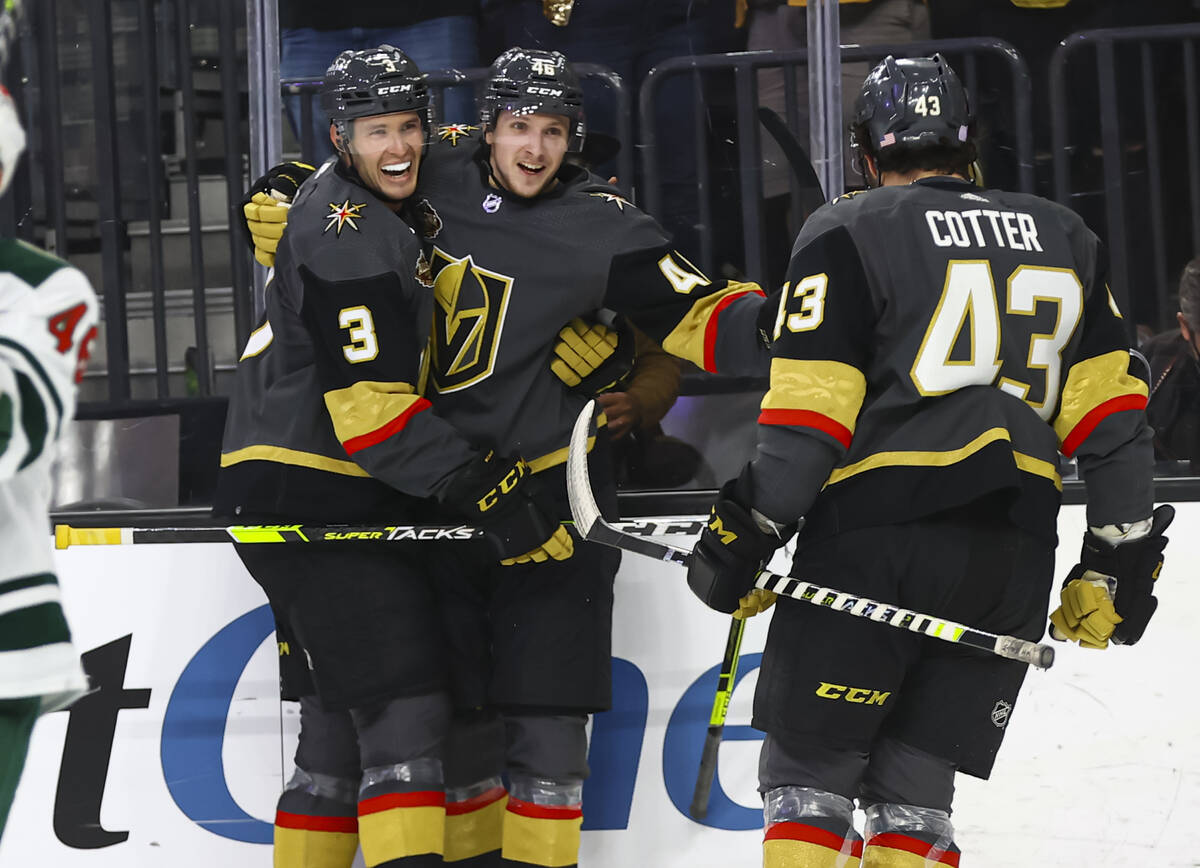 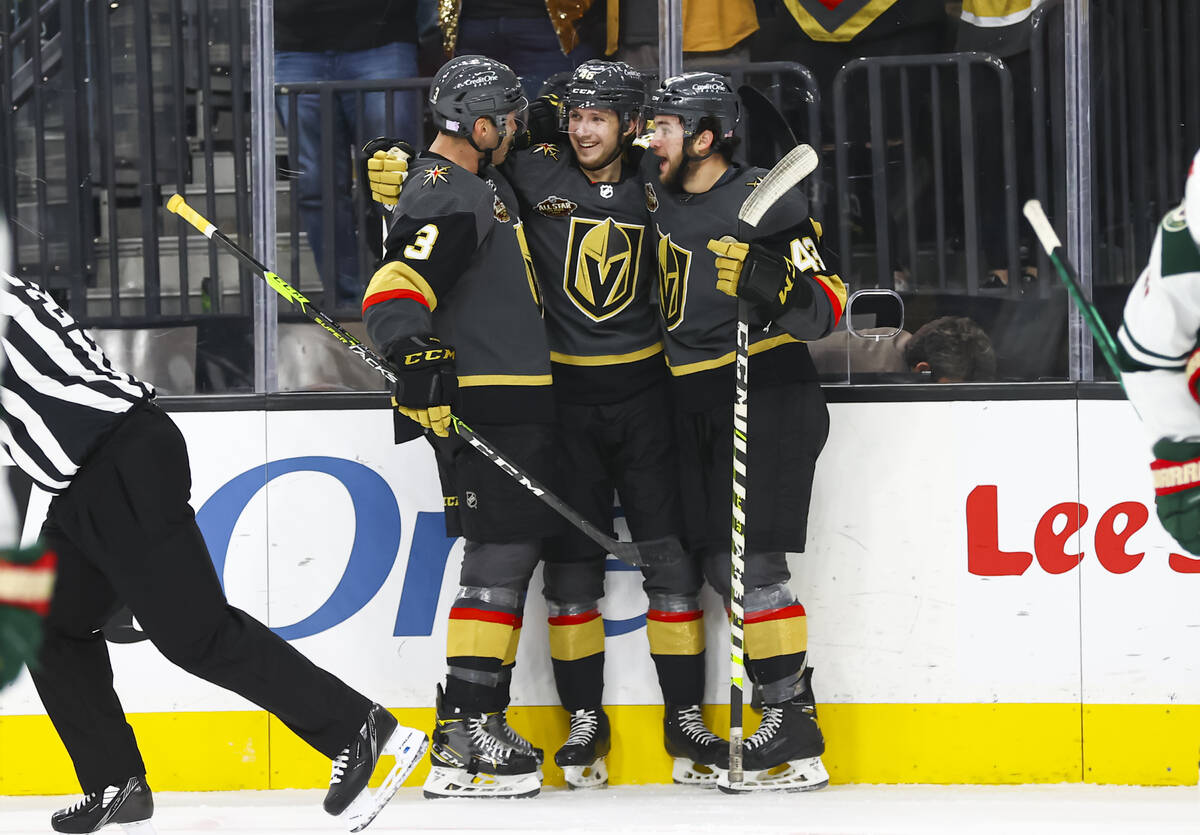 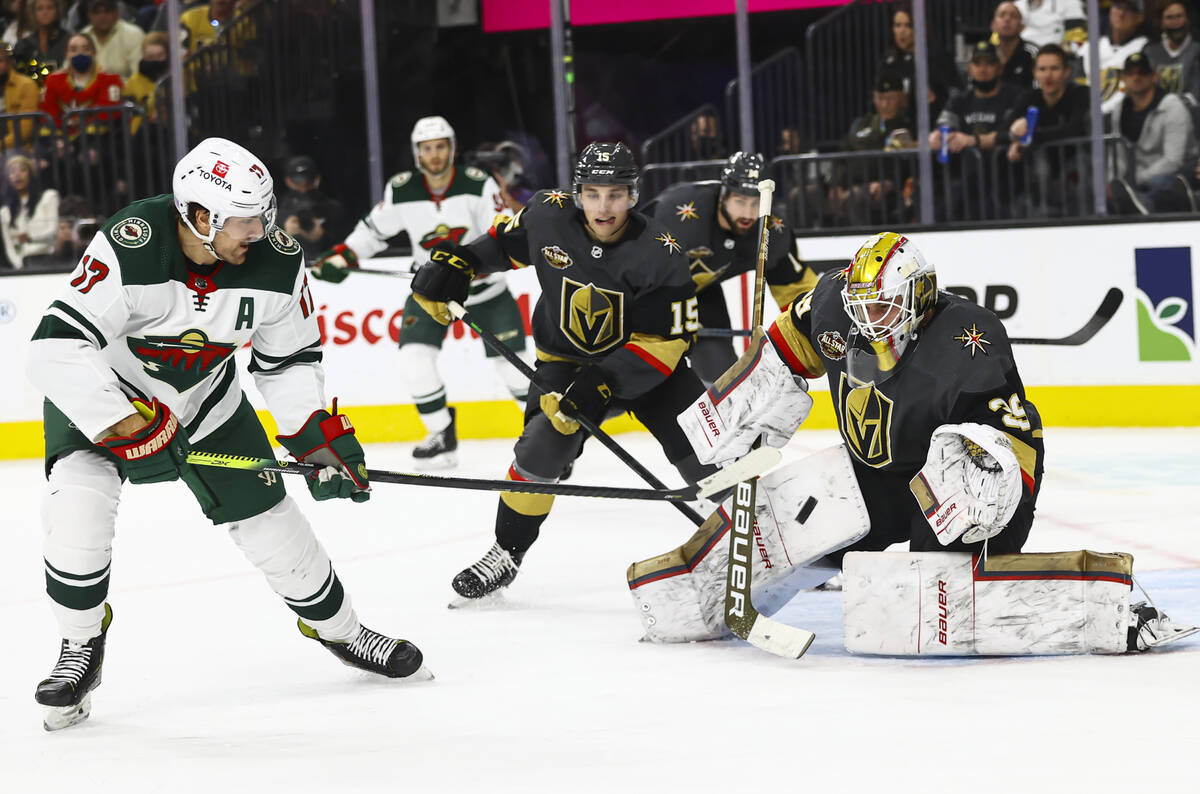 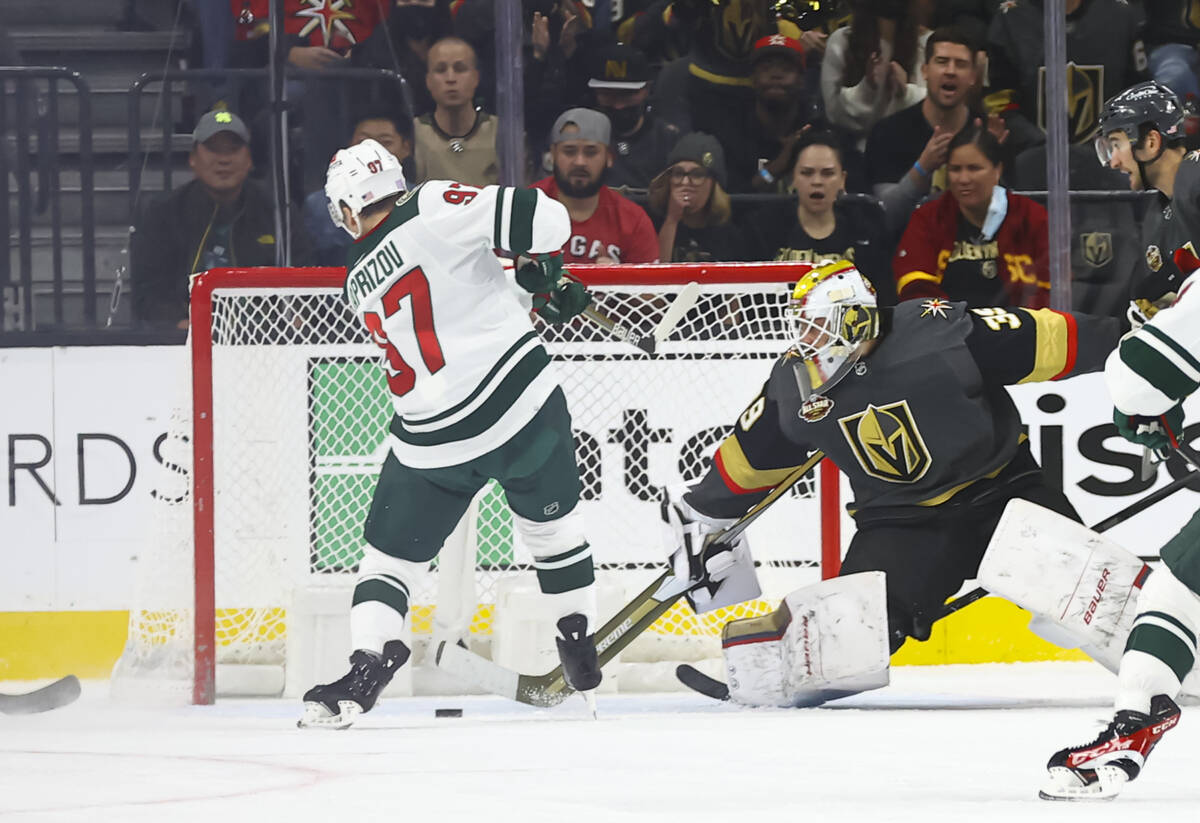 3. Knights goaltender Laurent Brossoit — He was solid in his second start in three games. He made 22 saves for his second win in three starts as a Knight.

2. Knights left wing Paul Cotter — He scored his first NHL goal 6:08 into his second game to open the scoring. It took him only two shots on goal to find the back of the net.

1. Knights right wing Jonas Rondbjerg — He also scored his first NHL goal in the first period of his seventh game. He added an assist on Cotter’s goal for the first two-point performance of his career.

The Knights led 2-0 after the first because of Cotter and Rondbjerg, but they had to work to maintain their lead most of the second. Then, just before intermission, right wing Reilly Smith stole the puck from Minnesota defenseman Matt Dumba in the neutral zone.

Smith sprinted into the offensive zone before softly sending the puck back to Marchessault in the slot. He buried the pass for his fifth goal in five games to give the Knights a 3-0 lead. It turned out to be the game winner

6-for-6 — The Knights’ performance on the penalty kill.

They were short-handed for 9:11 — including the final 1:03 of the game — and didn’t allow a goal. They also defended five-on-three for 1:53. The Wild had nine shots on goal during their six power plays, but only three were from less than 34 feet away.

The Knights played a tribute video for defenseman Jon Merrill during the first media timeout Thursday.

Merrill, an expansion draft pick, played three seasons in Las Vegas before leaving as a free agent. He helped defeat the Knights in the NHL semifinals with the Montreal Canadiens last postseason, but Thursday was his first regular-season game at T-Mobile Arena since his departure.

Merrill played 140 games for the Knights and had six goals and 19 assists.

The Knights had their annual Military Appreciation Night on Thursday.

The team wore special camouflage jerseys during warmups and auctioned them to benefit the Vegas Golden Knights Foundation and The Folded Flag Foundation.

The Knights also had veterans crank the rally siren between periods.