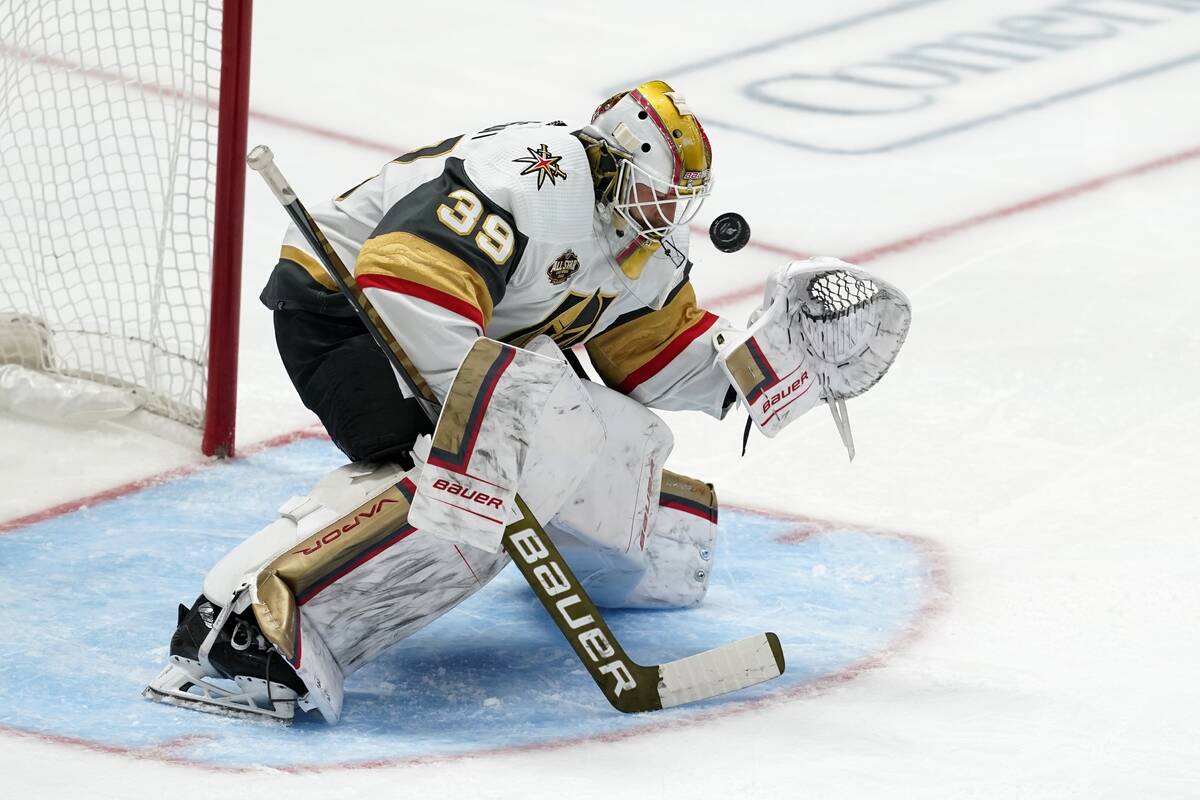 Vegas Golden Knights goaltender Laurent Brossoit has a shot from the Dallas Stars deflect off his mask in the third period of an NHL hockey game in Dallas, Wednesday, Oct 27, 2021. (AP Photo/Tony Gutierrez)

3. Knights winger Evgenii Dadonov — After scoring a bizarre empty-net goal Tuesday at Colorado, he netted the overtime winner in more conventional fashion after Nicolas Roy did the dirty work behind the net. Dadonov finished with a team-high four shots on goal.

2. Knights winger Jonathan Marchessault — His shift in the second period when the veteran spark plug dished out two heavy hits appeared to wake up the Knights. Marchessault tied the game 2-2 on a one-timer with 1:02 remaining in regulation for his first goal since opening night.

1. Knights goaltender Laurent Brossoit — He finished with 32 saves in his first start and allowed the Knights to steal two points. The stop on Luke Glendening late grabbed the headlines, but he also turned away Alexander Radulov on a breakaway midway through the third to keep it a one-goal game.

Coach Pete DeBoer’s timeout with 1:35 left in the third period

The Knights pushed hard with the extra attacker, and the six skaters on the ice were more than a minute into their shift when DeBoer wisely gave them a breather after Alex Pietrangelo’s shot was blocked into the netting. That allowed the group to remain on the ice — only Dadonov came off the ice for Chandler Stephenson — and Marchessault blasted home the tying goal at the end of a shift that lasted 1:44.

The Knights improved to 7-2 all time vs. the Stars and 5-1 at American Airlines Arena in Dallas. This was the first meeting since the 2020 Western Conference Final in Edmonton, Alberta, when the Stars won the series in five games.

Marchessault called Dallas’ forecheck “amazing” in the first period when the Knights were pinned in the defensive zone for long stretches. The numbers at the intermission were lopsided, with the Stars holding a 15-5 edge in shots on goal and a 30-10 advantage in shot attempts while generating 21 scoring chances to the Knights’ four.

28 — The number of blocked shots recorded by Dallas. That means of the 57 shots attempted by the Knights, nearly half of them were blocked by the Stars. Pietrangelo had a team-high eight shots blocked.

“Back to back, we had some travel issues (Tuesday) night, so we came in day of the game (Wednesday), which is really unusual. There was a lot of things stacked against us. We needed our goalie to be our best player, and he was.” — DeBoer