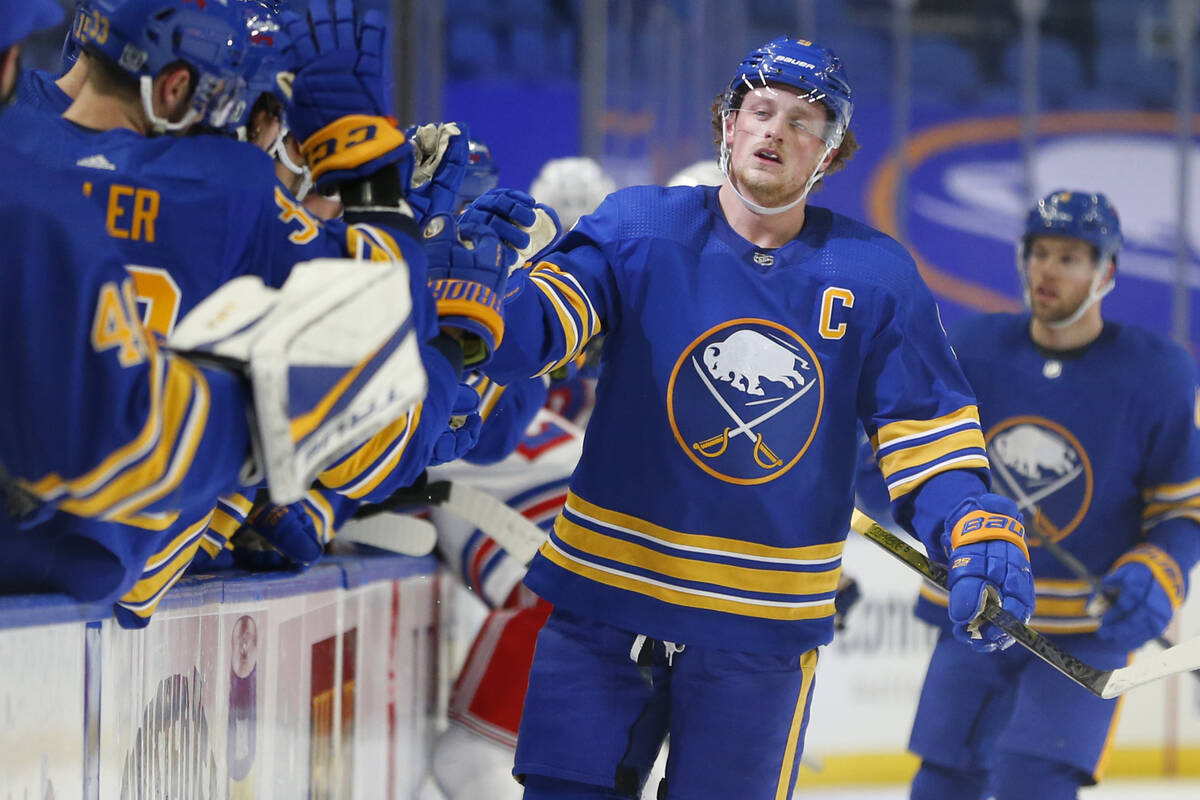 Buffalo Sabres forward Jack Eichel (9) celebrates his goal during the first period of an NHL hockey game against the New York Rangers, Thursday, Jan. 28, 2021, in Buffalo, N.Y. The Jack Eichel era in Buffalo is over, with a nasty public divorce reaching an eight-month finality on Thursday, Nov. 4, 2021. when the Sabres traded their ex-captain and face of the franchise to the Vegas Golden Knights. (AP Photo/Jeffrey T. Barnes, File) 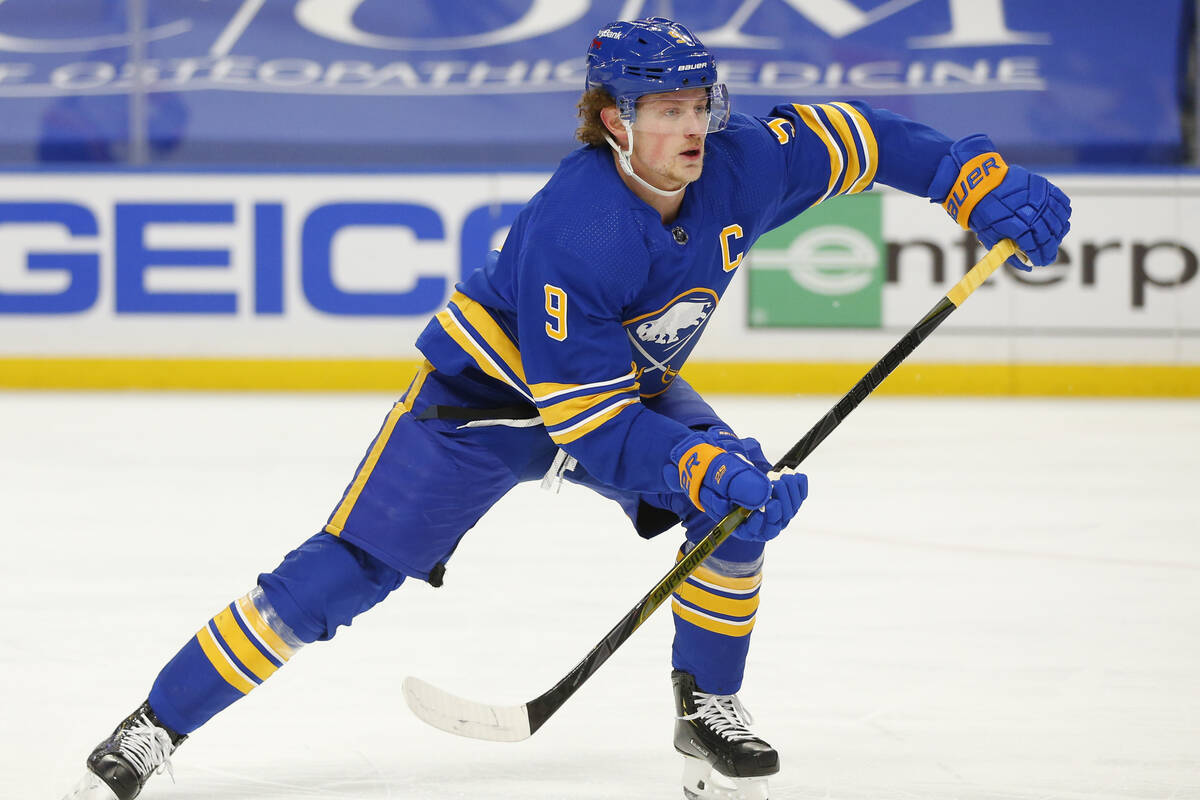 Buffalo Sabres forward Jack Eichel (9) skates during the second period of an NHL hockey game against the New York Rangers in Buffalo, Monday, Feb. 15, 2021. The Jack Eichel era in Buffalo is over, with a nasty public divorce reaching an eight-month finality on Thursday, Nov. 4, 2021. when the Sabres traded their ex-captain and face of the franchise to the Vegas Golden Knights.(AP Photo/Jeffrey T. Barnes, File) 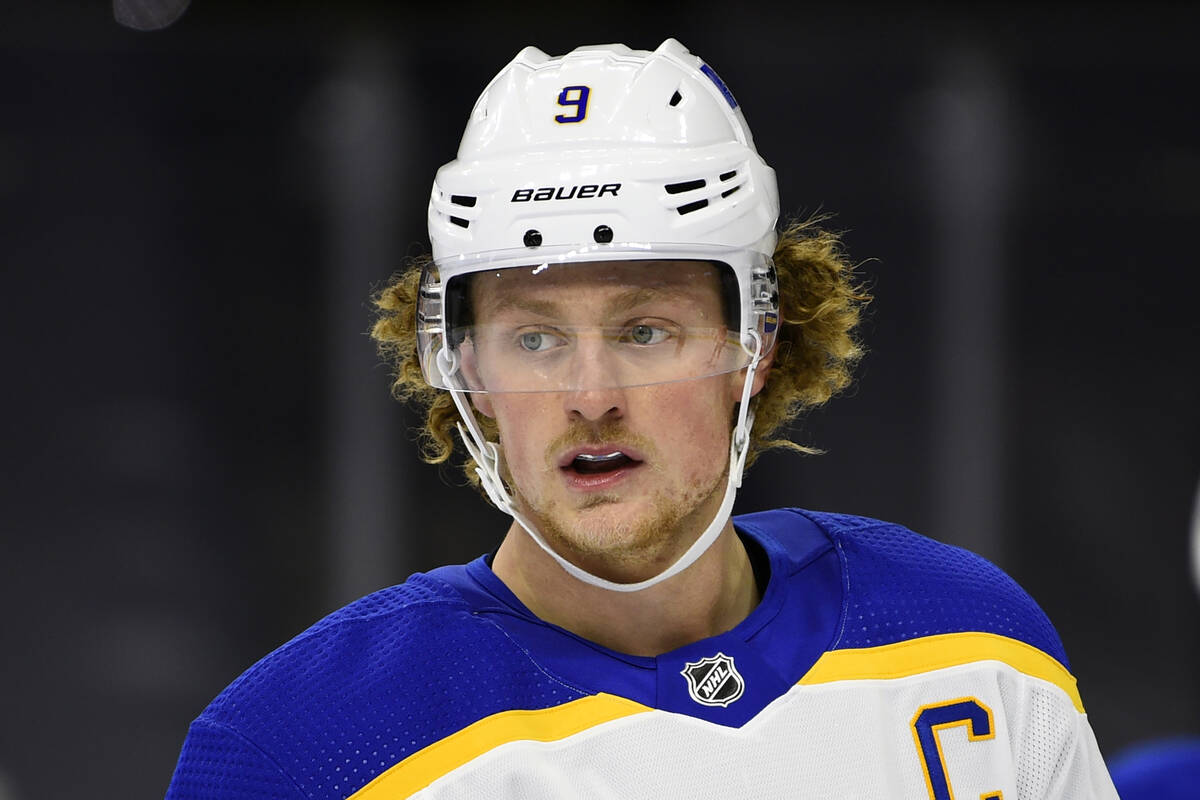 Buffalo Sabres' Jack Eichel is shown during an NHL hockey game against the Philadelphia Flyers in Philadelphia, Tuesday, Jan. 19, 2021. The Jack Eichel era in Buffalo is over, with a nasty public divorce reaching an eight-month finality on Thursday, Nov. 4, 2021. when the Sabres traded their ex-captain and face of the franchise to the Vegas Golden Knights.(AP Photo/Derik Hamilton, File)

The Golden Knights had a key decision to make if they wanted in on the Jack Eichel sweepstakes.

It was what to do with Eichel’s neck.

The 25-year-old center is one of the NHL’s most talented players but hasn’t played a game since March 7. He and the Buffalo Sabres agreed he had a herniated disk in his neck that required surgery. They disagreed about what kind of procedure he should have to fix it.

The Knights, in agreeing to acquire Eichel on Thursday, are going to let him have his preferred disk replacement surgery rather than a more common and more proven disk fusion surgery. Eichel said he will have the procedure Friday at Rocky Mountain Spine Clinic in Denver. Dr. Chad Prusmack, who has consulted with the Denver Broncos and advocated on Eichel’s behalf publicly on Sportsnet’s “32 Thoughts” podcast in July, will perform the operation.

The decision to let Eichel have a surgery that never has been done on an NHL player is a risk for the Knights, but their medical staff and other orthopedic surgeons support it.

“No one in hockey has had this surgery,” Knights general manager Kelly McCrimmon said. “Does that put some uncertainty to it? I guess it does. Do we have a comfort level that he’s going to return to full health? We do.”

Disks are the ligaments of the spine.

They are found in between bones and provide the mobility for extension, rotation and more. Dr. Thomas Schuler, an orthopedic surgeon who is the chairman of the medical and scientific board at the National Spine Health Foundation and has consulted with the Washington Football Team, compared a disk to a jelly doughnut. It’s soft in the middle with a gel-like center and more structured on the outside.

The outer wall can tear with an injury, and the center, the “jelly,” can spill. That can lead to pinched nerves and “disabling pain,” Schuler said.

Most herniated disks tend to get better over time, said Dr. Neel Anand, a professor of orthopedic surgery and the Director of Spine Trauma at the Cedars-Sinai Medical Center in Los Angeles. But some don’t.

Eichel didn’t play the rest of the 2021 season after herniating his disk. His former agents said in July that they and the Sabres agreed he would try “conservative rehabilitation” until early June. When he didn’t show improvement, both sides agreed he would need surgery.

Deciding which kind led to a divorce.

“I think the way you have to look at it is if he’s not in the situation he’s in, is he even available?” Knights coach Pete DeBoer said. “The answer is probably not.”

The Sabres’ and Eichel’s preferred surgeries start the same way.

The procedure begins by cutting open the front of the patient’s neck and removing the damaged disk. What comes next is where there was disagreement.

Buffalo preferred anterior cervical discectomy and fusion, or ACDF. It involves, after taking away the disk, fusing the bone above to the bone below. Schuler said the goal is taking pressure off the nerve and freeing up the spinal cord for stabilization.

It’s a procedure that has been done on high-level athletes. Former NFL quarterback Peyton Manning had ACDF and played four more seasons, winning an MVP and a Super Bowl in the process, before retiring at age 39. Former New York Mets third baseman David Wright had fusion surgery in 2016. He played two more games in the big leagues.

A study published by the Orthopaedic Journal of Sports Medicine on 26 professional athletes — which included NFL, NBA, MLB and NHL players — showed 80 percent returned to play after getting ACDF. They returned in an average of 9.5 months, and their average career length afterward was 3.2 years.

The second option, the one Eichel will get, is disk replacement surgery.

This procedure, which is newer and originated in the early 2000s, involves putting an artificial disk into the part of the neck where the damaged disk was. That way, the pressure is still taken off the nerve, but the motion of the neck and spine can return to normal. The lack of additional stress put on different levels of the neck and spine also offers hope the surgery will have better long-term outcomes than ACDF, though that continues to be studied.

The operation also has a faster recovery time than ACDF. McCrimmon estimated Eichel could play within three to five months after getting the surgery. Eichel prefers the procedure for all those reasons.

“I’m very comfortable with it,” said Eichel, who added that he has spoken with athletes who have had the surgery. “I have extreme confidence in my surgeon and the people I plan to do my recovery with.”

The risk associated with disk replacement surgery is that it’s largely unproven on high-level athletes. UFC fighter Chris Weidman shared on social media that he underwent the procedure in January 2019. His next fight was August 2020, a win over Omari Akhmedov. But no NHL player has publicly revealed that they’ve had the surgery.

It has been done on rugby players, lower-level hockey players, extreme-sport athletes (such as dirt bikers or surfers), professional stunt people, members of the military and more.

It’s unclear how the artificial disk will hold up in the contact-heavy NHL, which is why the Sabres could have been hesitant to approve it. But Anand said there is enough data on the procedure and the artificial disks — which are approved by the Food and Drug Administration — to support Eichel’s decision.

“There’s nothing experimental about it,” Anand said. “And just because it hasn’t been done in a professional athlete doesn’t mean it shouldn’t be done.”

Eichel’s decision could have a ripple effect in sports medicine.

If his surgery goes well, it could pave the way for other athletes to try it rather than ACDF. It also could give team doctors more confidence recommending it.

His standoff with the Sabres could have consequences in future labor negotiations, too. The team has final say in medical decisions, according to the NHL’s Collective Bargaining Agreement. Because Buffalo wouldn’t let Eichel get the surgery he wanted, one of the league’s brightest stars was on the shelf for months.

If Eichel had his preferred surgery in early June, he would have been on track to return between early September and early November. His recovery timeline now spans from early February to early April. His example could lead to the NHL Players’ Association seeking changes in the next CBA.

The long-term implications could be interesting. But the short-term impact is a hockey player, a talented one at that, is about to get one step closer to returning to an NHL game.

“I made the decision that this would be the best course of action for me,” Eichel said. “I think that’s kind of where it brings us to now and just finding a partner that would allow me to do this. Buffalo wasn’t comfortable with the surgery, and Vegas obviously is, so that’s where we are.”