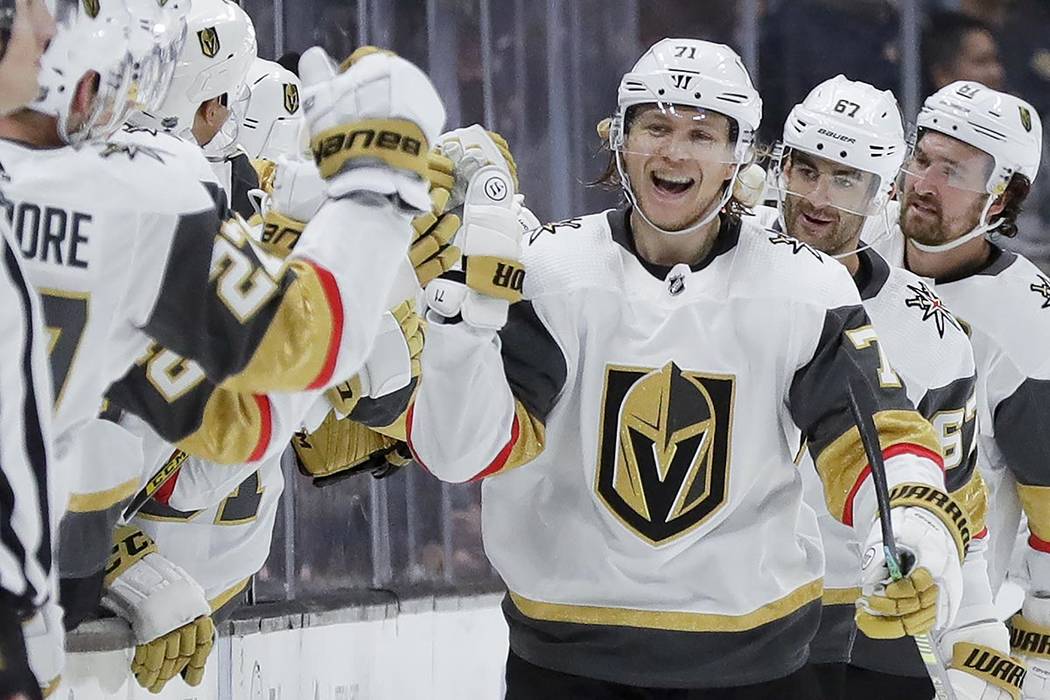 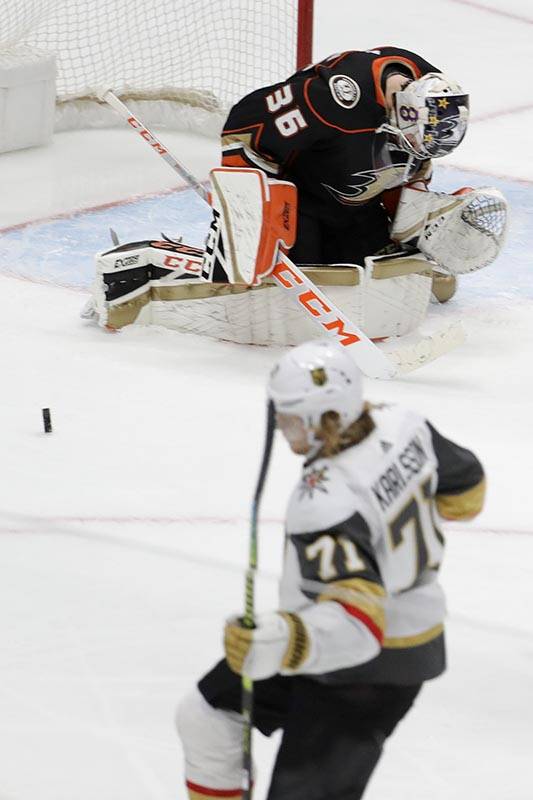 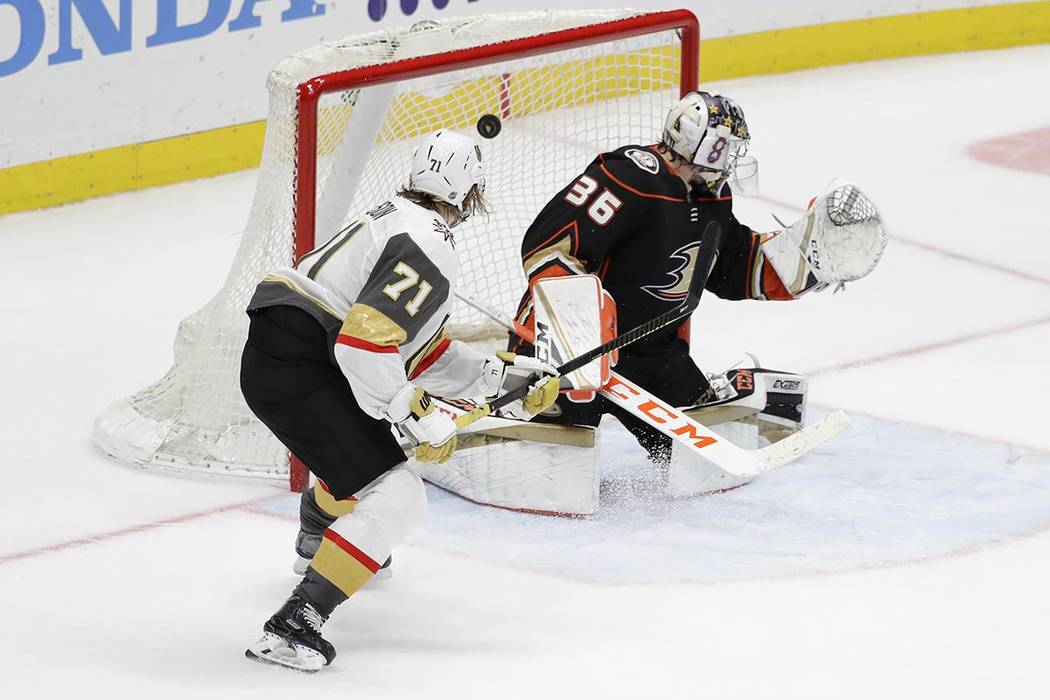 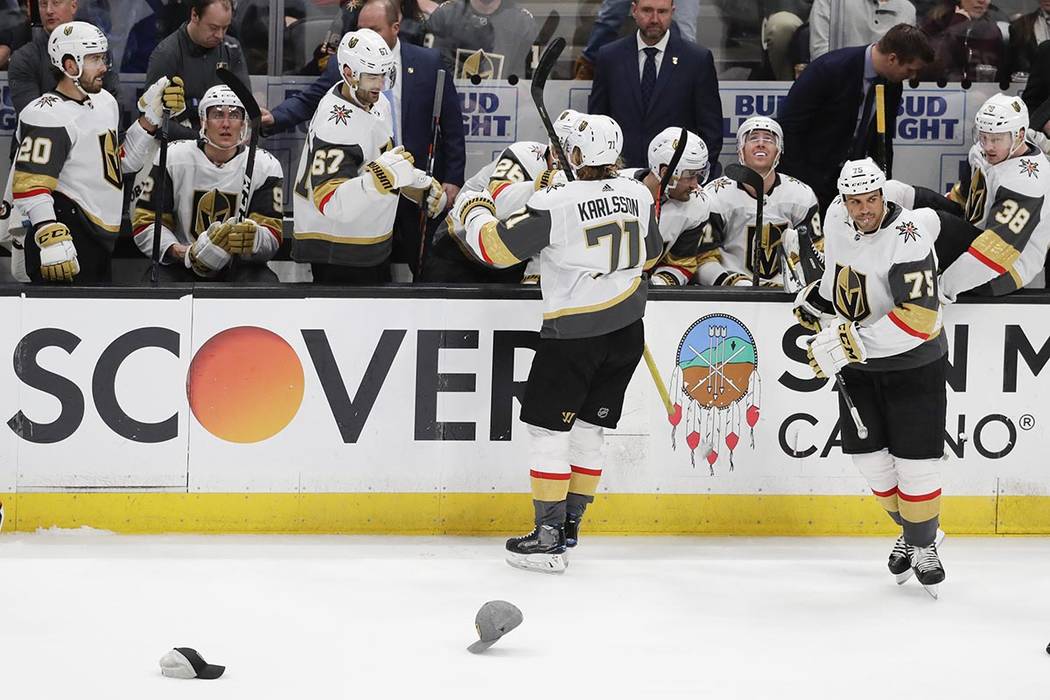 ANAHEIM, Calif. — Considering how long it’s been since William Karlsson scored, the Golden Knights center figured the puck hit Max Pacioretty on its way in during the final minute of the second period Sunday.

There’s no way it was Karlsson’s goal, right?

With the first one out of the way, Karlsson went on to record a hat trick in the Knights’ wacky 6-5 overtime victory over the Anaheim Ducks at Honda Center.

It was the franchise-leading third career hat trick for Karlsson, who accomplished the feat twice in the team’s inaugural season on the way to a career-high 43 goals. He and Jonathan Marchessault are the only players with multiple hat tricks for the Knights.

Karlsson hadn’t scored in his previous 20 games dating to Dec. 13, though he missed eight games after breaking a finger on his final shift against Buffalo on Jan. 14.

In his two previous seasons with the Knights, Karlsson didn’t go more than eight games without a goal.

“We need him to get a little bit hot here,” coach Pete DeBoer said. “He works so hard and he gets so many chances, it was nice to see him get on the board. Hopefully that opens the floodgates.”

On his first goal, Mark Stone patiently assessed his options and picked out Karlsson alone in the high slot. His wrist shot beat Anaheim goaltender John Gibson with 56.4 seconds remaining in the second period as Pacioretty provided a screen in front.

Karlsson put the Knights ahead 4-3 at 6:28 of the third period not long after a power play expired when he gathered a pass from Chandler Stephenson and snapped a shot from the left faceoff dot that slipped between’s Gibson’s arm and his body.

He completed the hat trick at 11:05 of the third when Stone sent a pass across the slot and Karlsson controlled it with the outside of his skate, then flipped a backhand into the top corner for his 13th goal and 40th point of the season.

Several Knights fans among the announced crowd of 15,171 tossed their hats onto the ice.

Anaheim’s Nick Ritchie scored the second of his two goals 21 seconds into the third period to prevent Karlsson from what otherwise would have been a natural hat trick.

“It feels like it’s been forever,” Karlsson said. “I think we played pretty well still. It’s tough that we let them back in the game but that happens in hockey sometimes. Kudos to them. I’m just happy with the two points and obviously to score again.”

From NHL public relations, “Sunday’s contest marked the third time in the month of February that the Golden Knights have competed in an 11-goal affair, after falling short to the Hurricanes on Feb. 8 (6-5 SO) and edging the Blues in overtime on Feb. 13 (6-5 W).

They joined the Predators (three times in October) and Rangers (three times in November) as the third team to compete in three games with 11 combined goals in a single month (including shootout-deciding goals).

– Stone joined Edmonton’s Leon Draisaitl, the league’s leading scorer, as the only players to collect four or more assists on multiple occasions this season.

– Shea Theodore’s overtime goal was his 42nd point, setting a franchise record for points by a defenseman. Colin Miller set the previous mark during the Knights’ inaugural season.

– Reilly Smith assisted on Karlsson’s third goal to reach 50 points for the third straight year and fifth time in his career.

– Chandler Stephenson’s assist on Karlsson’s second goal was his 12th in 35 games with the Knights, matching his career high set in 67 games with Washington in 2017-18.

– Malcolm Subban won his third straight start since the All-Star break and owns a 3.79 goals-against average and .845 save percentage in that span.

”I thought (Subban) made a couple huge saves when he needed to,” DeBoer said. “Even the last two goals, we had a little bit of a breakdown. Put some pucks to the net and going off people. Those things happen.

“They made a couple plays and got some pucks into the crease area and found a way to bang some in.”