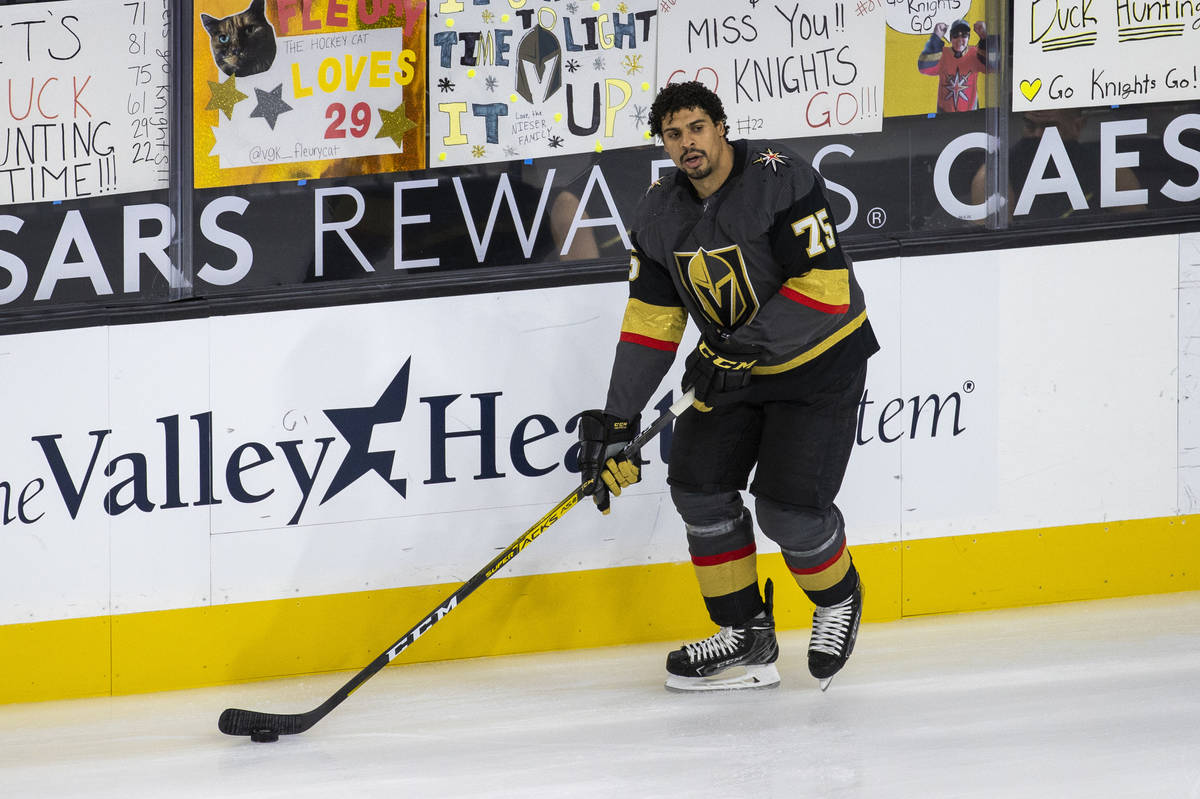 Golden Knights right wing Ryan Reaves (75) skates by handwritten signs from fans during the warm ups of an NHL season-opening game versus the Anaheim Ducks at the T-Mobile Arena on Thursday, Jan. 14, 2021, in Las Vegas. (L.E. Baskow/Las Vegas Review-Journal) @Left_Eye_Images

The NHL’s Department of Player Safety will not issue any supplemental discipline stemming from the play that took place during the first period of the Knights’ 1-0 victory over the Coyotes on Sunday at T-Mobile Arena, according to a person familiar with the situation.

Reaves delivered a hard, open-ice check right after Gross made a pass in the Coyotes’ zone with 7:30 remaining in the first period. Gross left the game with a lower-body injury caused when their knees collided on the play and was undergoing further evaluation after the game.

The referees did not penalize Reaves for the hit.

The Department of Player Safety reviewed the play and decided that it did not require any additional discipline.

The understanding is that the department felt even though Reaves made contact with Gross’ head, it was not definitively the main point of contact. Additionally, their belief was that Rule 48.1(i) came into play, as Reaves attempted to hit squarely through Gross’ body and his head was not “picked” as a result of poor timing, poor angle of approach or unnecessary extension of Reaves’ body.

The Coyotes were furious a penalty was not called, and the game got chippier as it went along. The teams exchanged heated words after the final buzzer sounded.

Reaves was injured in the third period and did not play the final 7:37. He was placed on injured reserve Monday, according to the NHL media website.

“Obviously, we’ve seen it now,” Arizona coach Rick Tocchet said following the game. “We all know. You don’t have to be a hockey guy to know what the hit is. I’m not going to say it. We’ll see what happens.”

The teams close out the regular season with back-to-back games on April 30 and May 1 in Arizona.

“I thought it was clean,” Knights coach Pete DeBoer said in his postgame comments. “The only concern I had live was ‘Was it late?’ and when you watch it, he’s actually, it’s not even close to late. It’s as he’s releasing the puck he hits him.

“Hopefully, the kid’s all right. You hate to see anybody get hurt but I didn’t see anything wrong with the hit.”

This is the second time in recent months that a hit from Reaves knocked a Coyotes player out of the game with no supplemental discipline handed out.

During a postseason exhibition game on July 30, Reaves delivered a hit to the head on Arizona forward Nick Schmaltz that was not penalized. Schmaltz missed the entire postseason.

“The one thing about Ryan is he hits hard but he hits clean,” DeBoer said. “His elbows are down and his feet are usually on the ice. He’s done that to a few people.”