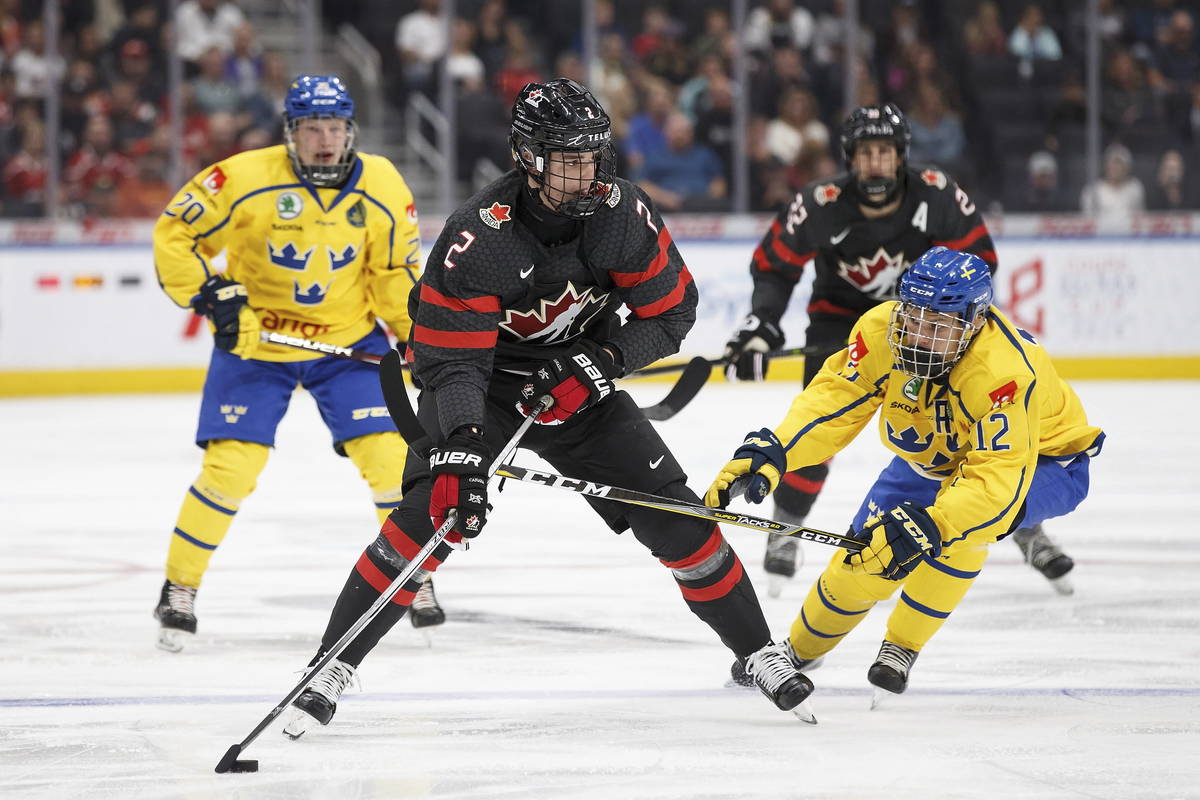 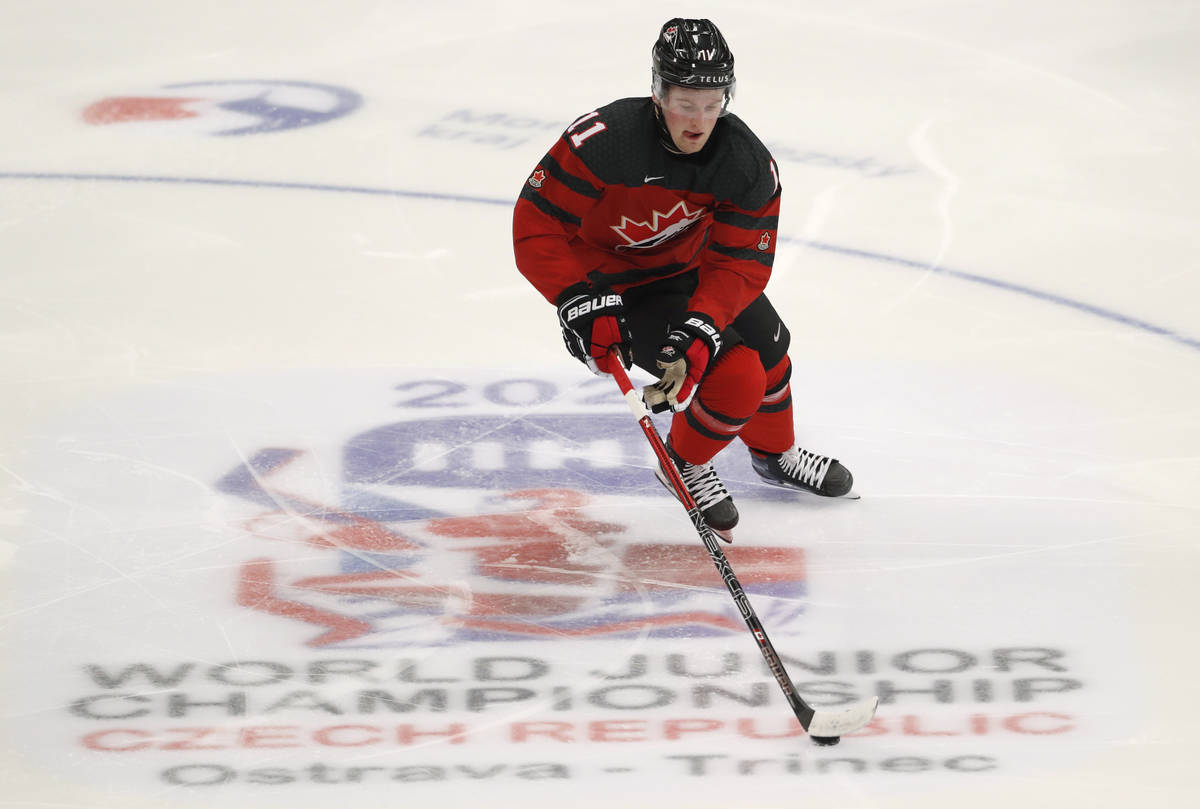 There is no date, location or even a selection order for the NHL draft.

The league postponed the event that was originally scheduled for June 26 and 27 in Montreal because of the coronavirus pandemic.

But with mock draft excitement in the air thanks to the NFL and WNBA, it’s hard not to get caught up and join in.

Also, the NHL Central Scouting Department released its final rankings last week, so there’s a whole list of Bradens, Kaidens and Connors from the Western Hockey League to dissect.

The Golden Knights were in first place March 12 when the NHL paused its season and, under the usual format, would select from Nos. 24 to 31 as the division winner, depending how far they advanced in the postseason.

After consensus top pick Alexis Lafreniere, draft boards will vary across the league with the scouting season cut short.

But it’s never too early to look at a few interesting names (in alphabetical order) that might be available when the Knights are on the clock.

D Justin Barron (Halifax, QMJHL) — He was slowed by a blood clot and missed almost three months for the Mooseheads, but finished No. 16 in Central Scouting’s rankings of North American skaters.

Barron doesn’t have the offensive upside of Saint John defenseman Jeremie Poirier but is regarded as a strong skater and would add organizational depth at right defense.

C Mavrik Bourque (Shawinigan, QMJHL) — New Jersey would be the perfect landing spot so he can eventually play with Nikita Gusev. Mavrik and Goose. The need for speed. Great balls of fire!

The 5-foot-11-inch, 171-pound Bourque had 71 points in 49 games before he was injured in early February. He possesses high-end offensive skill.

Brisson (5-11, 179) made one of the biggest leaps in Central Scouting’s rankings, going from No. 31 on the midterm list of North American skaters to No. 20. He led all United States Hockey League rookies in scoring and was second overall.

D Helge Grans (Malmo, Sweden) — This is a forward-heavy draft, and opinion seems to be split on whether the 6-2, 206-pound Grans or countryman William Wallinder of Modo is the top European defenseman available.

Grans has been rising up draft boards this spring after playing 21 games in Sweden’s top league. He is ranked the No. 6 European skater after landing at No. 21 in the midterm rankings.

C Ridly Greig (Brandon, WHL) — The Knights love Wheat Kings, and Brandon defenseman Braden Schneider is projected to be off the board in the middle of the first round. But his hard-nosed teammate could be there.

Here it is, the Teddy Bear Toss goal! Watch Ridly Greig send the bears flying! What a great night at Westoba Place! pic.twitter.com/yq4ONF2srY

Greig (5-11, 162) was a high pick in the WHL bantam draft three years ago by Brandon, owned by Knights general manager Kelly McCrimmon, and posted 60 points in 56 games. His father, Mark, was an NHL first-round pick in 1990.

C Hendrix Lapierre (Chicoutimi, QMJHL) — He could be this year’s Peyton Krebs and fall because of injury concerns. Lapierre was diagnosed with at least one concussion before doctors determined it was a neck injury. He was medically cleared after the season was paused March 12.

Hendrix Lapierre comes out of the box and scores on a shorthanded break. #HlinkaGretzkyCup pic.twitter.com/86pjTz6W0L

Lapierre is a former first-overall pick in the Quebec Major Junior Hockey League draft and won the league’s offensive rookie of the year award last season. He is the No. 13 North American skater in the Central Scouting rankings.

RW Jacob Perreault (Sarnia, OHL) — One of the most prolific finishers in Canadian juniors, Perreault was tied for 10th in the Ontario Hockey League with 39 goals in 57 games this season.

Backhand on the breakaway for his first of two on the night 👊 @StingHockey skated past the Storm with the help of a pair from #NHLDraft eligible @JPerreault_44. pic.twitter.com/wEXjD8McfO

A few mock drafts have linked the Knights with the 5-11, 192-pound son of longtime NHL player Yanic Perreault. The concerns seem to be with his decision-making and play away from the puck.

LW Lukas Reichel (Eisbaren Berlin, Germany) — It’s a big draft year for Germany, with forward Tim Stuetzle expected to be selected in the top five. Reichel and countryman John-Jason Peterka also could sneak into the first round.

Reichel’s uncle Robert was a two-time 40-goal scorer with the Calgary Flames. In 42 games in Germany’s top pro league, Lukas posted 12 goals and 24 points and was a key contributor for Germany at the World Junior Championship.