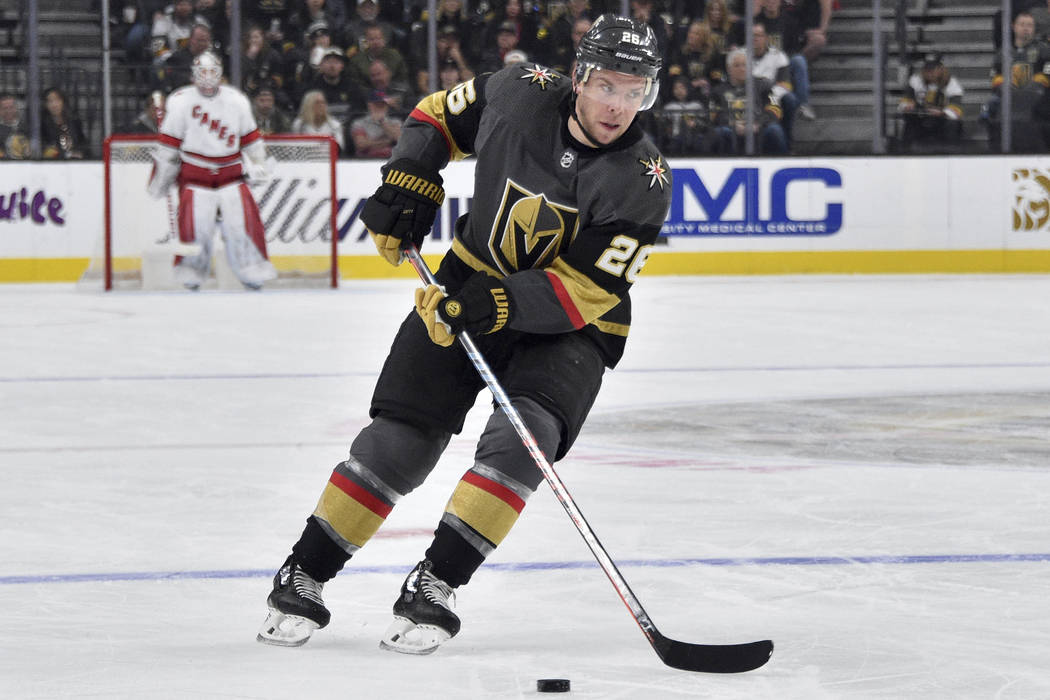 Center Paul Stastny has been a good soldier much of this season, often accepting assignments on the third line to balance the Golden Knights’ lineup.

Now he’s being rewarded for those sacrifices. Stastny moved to top-line center five games ago with William Karlsson out.

Since then, he’s thrived on offfense, with four goals and six assists in his past eight games. He credits his line’s direct, aggressive approach with creating opportunities for him to score.

“When you’re giving yourself chances every night, that’s the most important thing,” Stastny said.

Stastny was handed a lot of responsibility when Karlsson was injured. His average ice time increased from 16:46 to 18:51. He was asked to defend the Carolina Hurricanes’ top line 5-on-5 Saturday.

He’s largely succeeded with those duties, which is why it appears coach Peter DeBoer will keep him on the top line Tuesday against the Minnesota Wild.

“He’s the the kind of guy that has success with anybody,” left wing Jonathan Marchessault said. “He’s so smart, so poised with the puck. He makes your life easier on the ice. He’s always in the right spot. He’s a world-class player. We’re lucky to have him.”

With Karlsson back in the fold, the Knights debuted new power-play units at practice Monday.

One was a five-forward lineup with Stastny, Karlsson, right wing Mark Stone and left wings Marchessault and Max Pacioretty. During a later power-play drill the team had defenseman Shea Theodore take Karlsson’s spot.

The Knights are searching for answers because they’re 3-for-22 (13.6 percent) under DeBoer.

On the road again

The Knights traveled to Minnesota following practice for Tuesday’s game against the Wild. It will be their ninth time on the road in 10 games. Then they return for a five-game homestand against teams with a combined record of 163-79-31.

“It’s nice only going out for one,” DeBoer said. “We’ve had a tough schedule. Not only travel with the road trips we’ve had, but you look at the teams coming up on our schedule here in the next few weeks. It’s a tough schedule. We’re going to have to be on top of our game.”

■ DeBoer said he believes Karlsson, who hasn’t played since Jan. 14, will play Tuesday, barring a setback.

■ Goaltender Marc-Andre Fleury was given a maintenance day Monday and didn’t practice. Fleury has started 14 of the last 16 games and seven of eight under DeBoer.