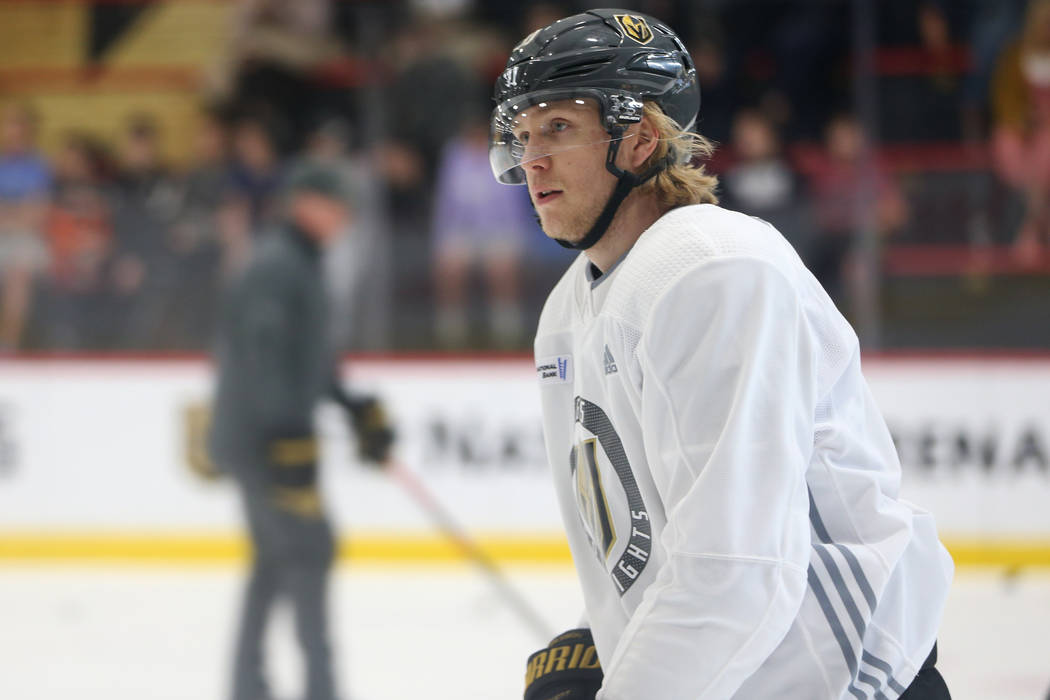 After Sunday, it’s clear no spot is safe over the team’s final 25 games. Even former 40-goal scorers aren’t exempt.

Karlsson skated on the third line during the Knights’ practice at City National Arena, as DeBoer sticks with the group of top-six forwards that’s driven the team’s offense since the All-Star break.

“For me, I’m going in with an open mind. I think it’s a fresh start for everybody, and we’ll see what happens.”

Karlsson has been sidelined since Jan. 14 and confirmed he was injured on his final shift in the 4-2 loss at Buffalo that day.

DeBoer mentioned in passing during his post-practice news conference Sunday that Karlsson sustained a broken finger.

The Knights reassigned center Nicolas Roy to the American Hockey League to clear room for Karlsson, who sounded optimistic he would be ready to play Tuesday when the Knights travel to face the Minnesota Wild.

“I was in all the meetings at the beginning on the first road trip when I got injured, so I kind of know the idea of how he wants the team to play,” Karlsson said. “Going on the ice and playing in the system is probably going to make me more and more comfortable.”

Karlsson missed the past eight games after appearing in 234 consecutive regular-season games dating to his time with Columbus and was the only player to appear in all 240 regular-season and playoff games in Knights history.

He is the franchise leader with 77 goals, including 43 during a breakout 2017-18 campaign when he found chemistry centering the first line with left wing Jonathan Marchessault and right wing Reilly Smith.

Karlsson signed an eight-year, $47.2 million contract last summer and was fourth on the team in scoring with 34 points (10 goals, 24 assists) in 49 games at the time of his injury. He was second in ice time (19:04) among forwards behind Mark Stone.

But Karlsson has yet to play for DeBoer, who was hired the day after Karlsson was injured, and knows he must audition for a role just as his teammates did.

“As much as I admire his game, the people that are here … they’ve told me over and over how much I’m going to appreciate this guy when he’s back in the lineup,” DeBoer said. “I’m looking forward to getting him back in.”

The decision to move Karlsson to the third line is made easier for DeBoer by the play of his top two lines.

Paul Stastny has overcome his slow start and produced 15 points in 13 games since Jan. 2, including two goals and four assists in the past five games centering Marchessault and Smith.

Meanwhile, the line featuring center Chandler Stephenson between left wing Max Pacioretty and right wing Mark Stone is the best in hockey, according to MoneyPuck.com, generating 3.91 expected goals per 60 minutes.

“I think (Stephenson) has done a real good job with those two guys, with (Pacioretty) and (Stone),” DeBoer said. “And I think (Stastny) has jumped in and done a real good job there. I’m not going to go to old line combinations that I wasn’t a part of before. We’re going to come in and give everyone a look and see what works now.”