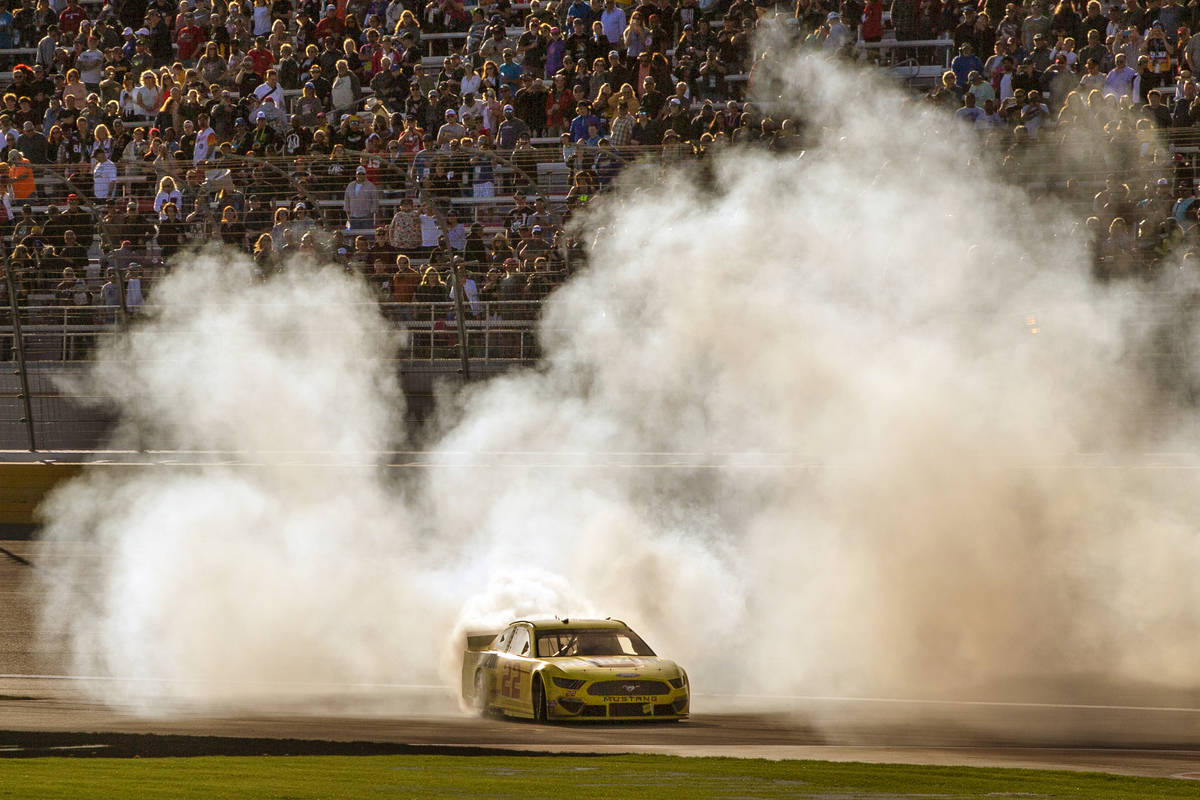 Joey Logano (22) celebrates with a burn out at the finish line following his win in the Pennzoil 400 presented by Jiffy Lube, a NASCAR Cup Series at the Las Vegas Motor Speedway on Sunday, Feb. 23, 2020, in Las Vegas. (L.E. Baskow/Las Vegas Review-Journal) @Left_Eye_Images 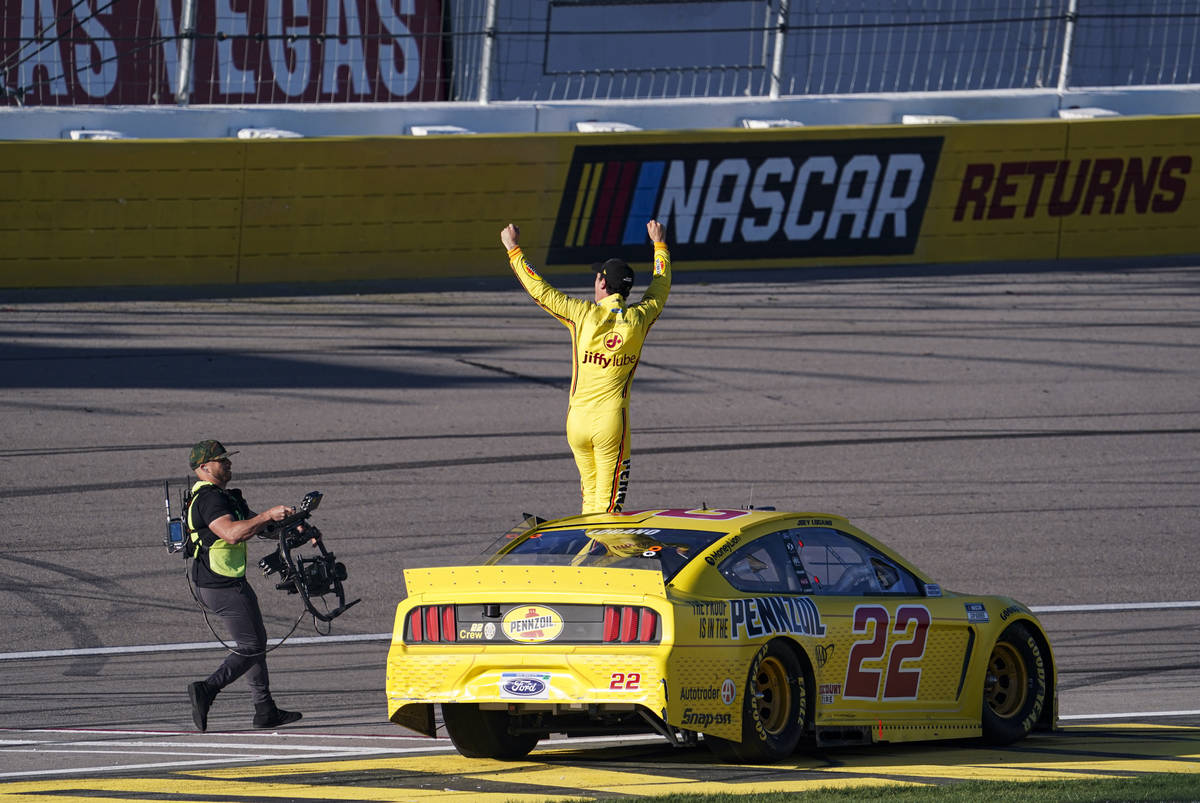 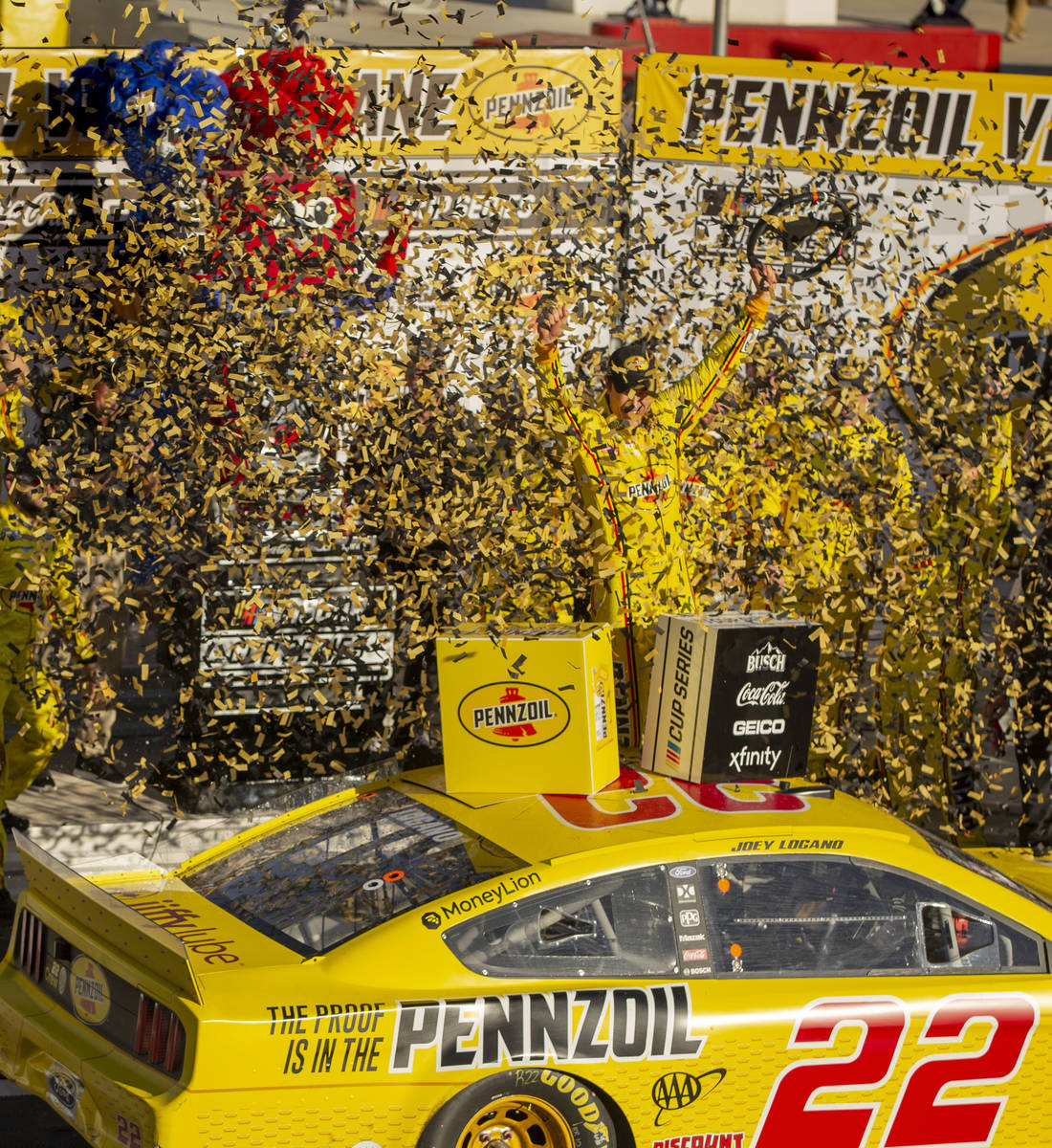 Joey Logano (22) is blasted with confetti as he celebrates in the winner's circle following the Pennzoil 400 presented by Jiffy Lube, a NASCAR Cup Series at the Las Vegas Motor Speedway on Sunday, Feb. 23, 2020, in Las Vegas. (L.E. Baskow/Las Vegas Review-Journal) @Left_Eye_Images

Like the love song from yesteryear, Joey Logano says sometime all you need is the air that you breathe to win a NASCAR race.

So long as that air is clean air.

“We talked about the scenario, whether it was the end of a stage or the end of a race, can we get clean air?” Logano said after leading 54 of 267 laps en route to winning the 2020 Pennzoil 400 in a Pennzoil sponsored car at Las Vegas Motor Speedway.

Logano gambled, staying on the track out front during a caution period with five laps remaining. When the race was restarted he drove away to his second consecutive victory in LVMS’ spring Cup Series race in front of a pre-COVID crowd estimated at 50,000.

When the leaders pitted for fresh tires, Logano credited new crew chief Paul Wolfe for making the winning call. The Connecticut driver won under caution when several cars collided on the white-flag lap.

“Paul came over the radio and said stick to the plan,” Logano said. “It got us in a position to have a good restart. I had a good push with Ricky (Stenhouse Jr.) behind me and had a good block on the 24 (William Byron) once I got the push. Once you get that clean air, I was in good shape.”

Matt DiBenedetto finished second, followed by Stenhouse Jr., Austin Dillon and Jimmie Johnson, who was making the first of his final two LVMS drives during his NASCAR retirement tour. Las Vegas racers Kyle and Kurt Busch ran 15th and 25th, respectively. Chase Elliott won the first two stages and led 70 laps before a flat tire put him in the wall and relegated him to 26th place.

The victory was the 24th of Logano’s career and the fifth in the past nine LVMS races for Team Penske. Brad Keselowski finished seventh and Ryan Blaney led 19 laps and appeared headed for the win before Ross Chastain spun and brought out the late yellow. Blaney, who was leading, and second-place Alex Bowman were among the drivers who pitted for tires while Logano stayed out.

“This has been our best racetrack in recent years,” Logano said of the three-car Penske stable. “So it’s not a surprise to see all those cars up front.”