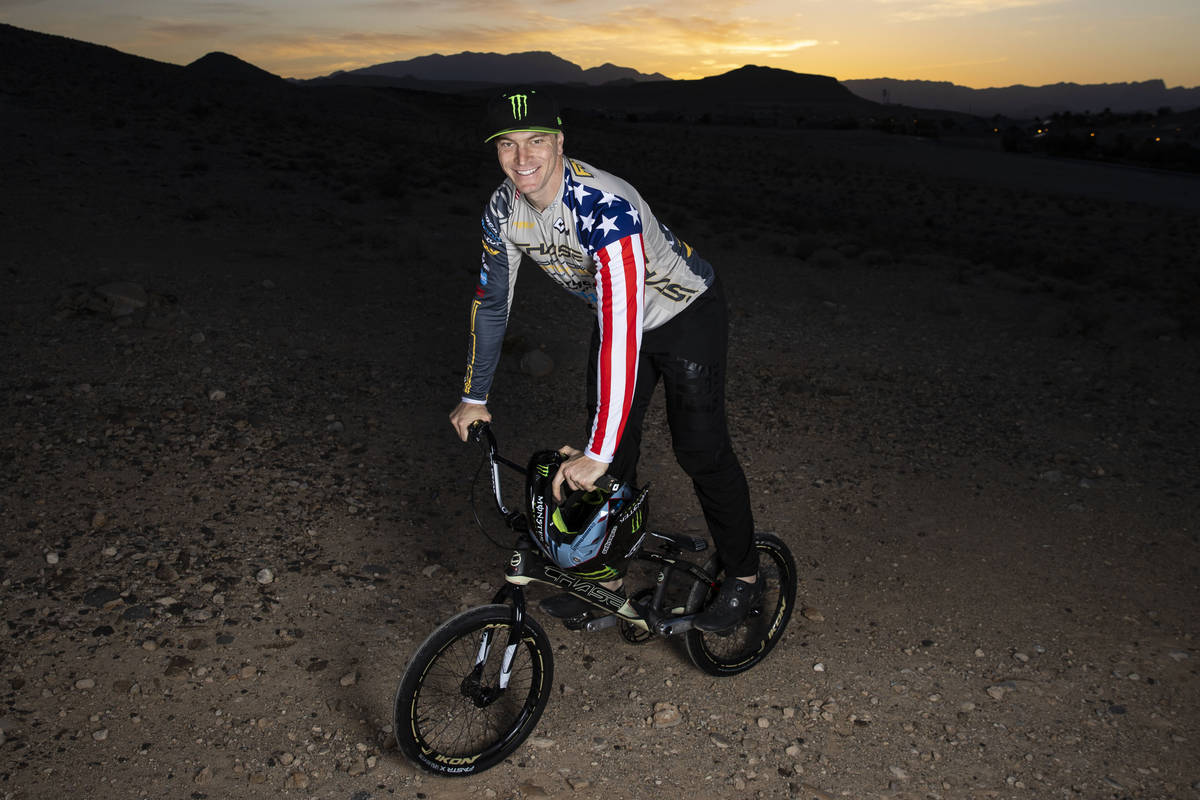 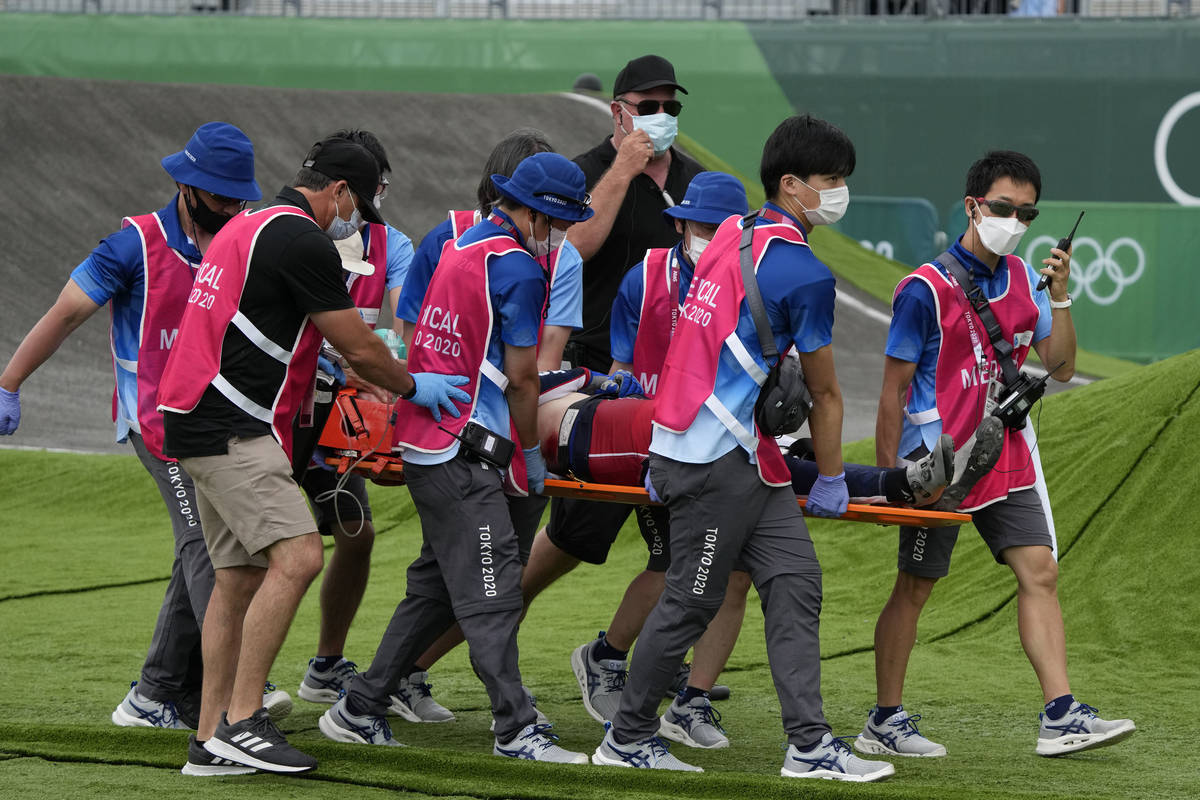 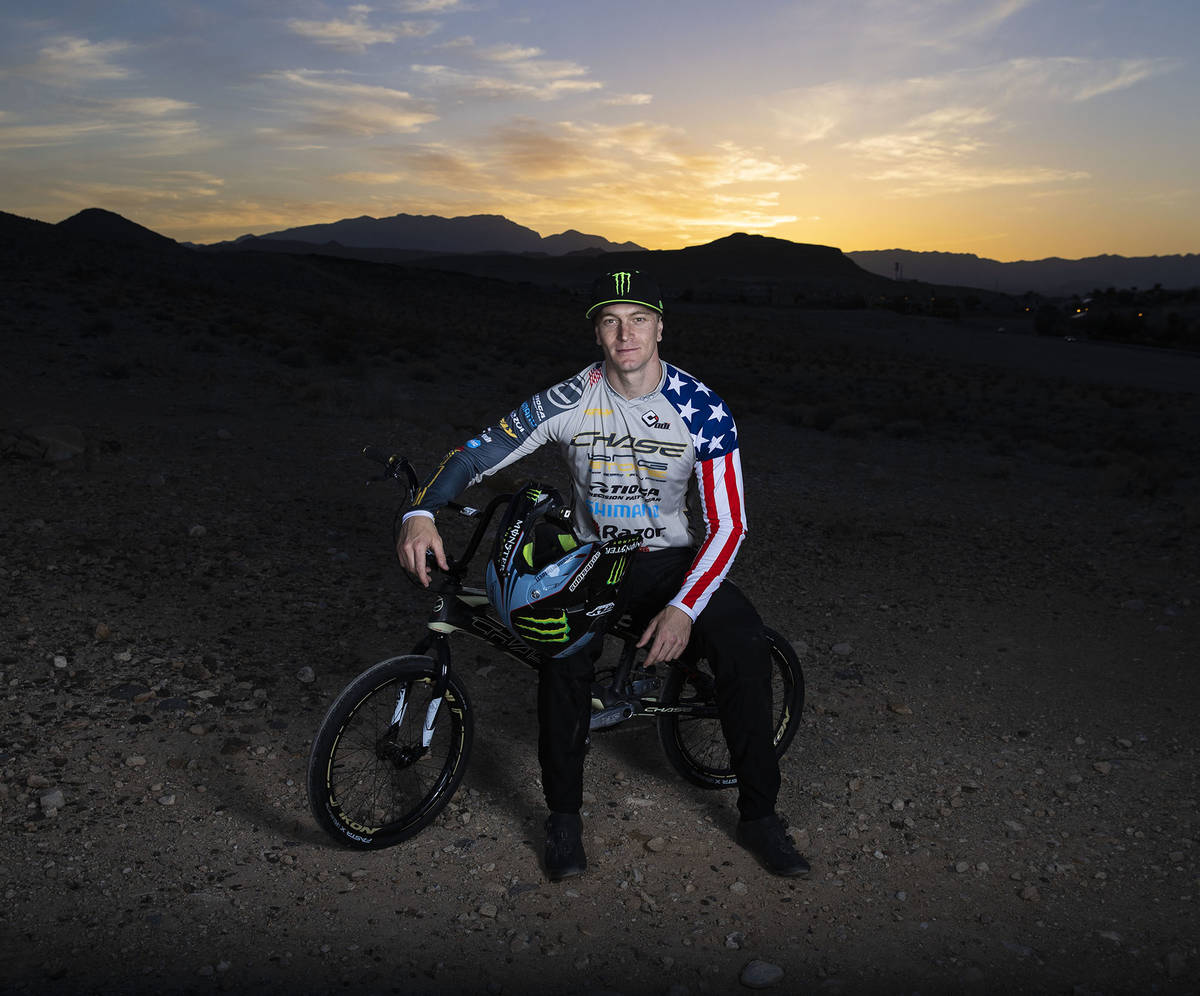 Connor Fields, professional BMX racer, poses for a photo at Olympic Sports Park, on Tuesday, April 6, 2021. Fields will join the U.S. team at the 2021 Summer Olympics in the men's BMX event in Japan. (Bizuayehu Tesfaye)

Connor Fields remains in strict concussion protocol while having also suffered a broken rib and bruised lung during a BMX qualifying run at the Olympics in Tokyo on Friday.

Fields, a Green Valley High and UNLV graduate, will remain hospitalized for a minimum of seven days while recovering.

His family had yet to speak to Fields as of Friday afternoon Las Vegas time.

“I suspect because of the nature of the Olympics and global stage, they’re being as careful as they can,” said Mike Fields, the racer’s father. “It’s clearly a challenge — they’re 16 hours ahead of us. But the folks from United States Cycling and the Olympics have been fantastic.

“I get calls and texts every 45 minutes. As soon as they know any information, we get it. The tricky part is that it’s a head injury, and you don’t find out anything quickly about head injuries.”

Connor Fields was scheduled for another CT scan Saturday afternoon Tokyo time, which doctors believed would give a better indication on the severity of his concussion.

In a statement released Saturday night Tokyo time, USA Cycling reported that Fields had sustained a brain hemorrhage during the accident. After a night in the ICU, doctors reported that there has been no additional bleeding, and no new injuries were found. Fields has been moved out of the critical care unit and will remain in the hospital until cleared.

Mike Fields said his son is awakened on the hour and asked a series of cognitive questions.

“He seems to be OK with those,” Fields said.

Connor Fields, 28, was trying to repeat as a gold-medal winner in the event, but crashed when his bike’s back wheel became tangled up with a rider behind him. Fields was then rolled over by two racers. He lay on the course for several minutes before being carried to an ambulance.

Fields had already clinched a spot in the final during previous qualifying runs.

This was a third Olympics for Fields, who stood atop the medal platform at the Rio Games in 2016. He finished seventh at the London Games in 2012.

Mike Fields said he was told by officials that doctors are not concerned his son might contract COVID-19 while hospitalized.

“He’s in his own room and the Chief Medical Officer of U.S. Cycling said it’s the best hospital he could be at in Tokyo,” Mike said. “They’re not worried at all about (COVID-19).

“At the end of the day, we know what we know right now. We are all really concerned. But as the conduit on this side, the messaging has to be only about the facts.”